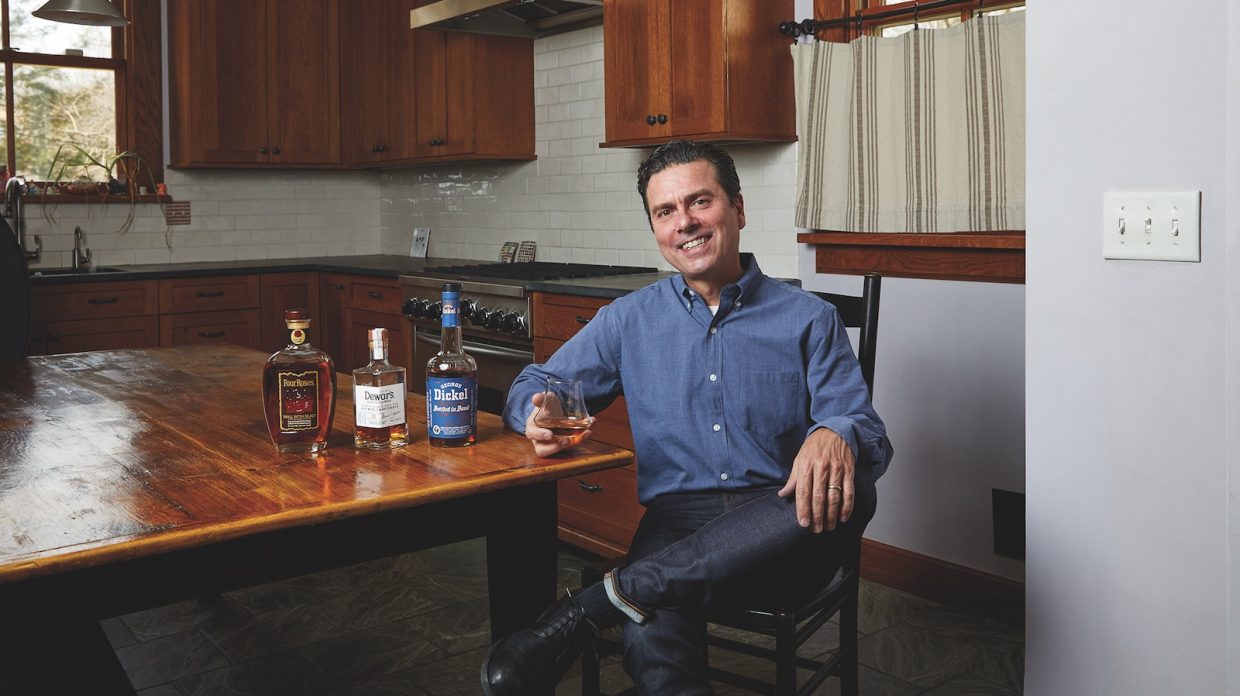 Norb Vnek, the winner of our 2019 Top 20 sweepstakes, poses with the top three bottles of the year in his home in Montclair, N.J. (Photo by Rachel Vanni)

Although he doesn’t necessarily consider himself unlucky, Norbert “Norb” Vnek says he has never won a contest. That unfortunate streak came to a surprising end when his name was drawn at random from 12,947 entries in Whisky Advocate’s 2019 Top 20 Sweepstakes, awarding him the top three whiskies, including the Whisky of the Year.

“It was just pure happenstance,” Vnek says, adding that he entered the sweepstakes on a spontaneous whim. And while winning may be new for the 53 year old Montclair, New Jersey resident, his appreciation for whisky dates back decades. “I’m not a casual drinker,” he declares. “I’m definitely an ardent whisky advocate.”

By Vnek’s recollection, his love for the spirit blossomed in graduate school. “That’s when I started appreciating scotches,” he says. Vnek honed his taste for scotch both stateside and on several trips to Scotland—one of which was especially notable. “My wife and I went to Scotland on our honeymoon, which just shows you the fervor of my interest in whisky and how accommodating my wife could be,” he says, adding, “Because it was in October, which is not the best time to be in Scotland.”

On another trip to Scotland, Vnek was introduced to Mortlach, which would become his favorite whisky. “I’d never heard of it, but it is far and away the most refined whisky I’ve ever had,” he says. Although scotch ignited his whisky journey, Vnek’s now refers to himself as “almost exclusively an American whiskey drinker.” Currently, he is especially fond of Stranahan’s from Colorado, an American single malt with a flavor profile that he describes as “fantastic in its spiciness.”

In addition to 2019 Whisky of the Year, George Dickel 13 year old Bottled in Bond, Vnek received bottles of Dewar’s 21 year old Double Double and Four Roses Small Batch Select—a small but well-rounded collection including a Tennessee whiskey, a blended scotch, and a bourbon.

Vnek invited his coworkers at Savills, the commercial real estate brokerage firm where he works as senior managing director, to join him for an informal tasting after work. “We tried to be as objective as possible,” he says, adding that the group was in general agreement with the Whisky Advocate tasting panel on the excellence of the George Dickel 13 year old Bottled in Bond. “I think all three were obviously very strong in their flavor profiles,” he says.

Whisky Advocate congratulates Vnek on his good fortune and commends him for sharing the joy of whisky. “I thought it’d be cool to share them with my coworkers,” he says. “They deserve it.”