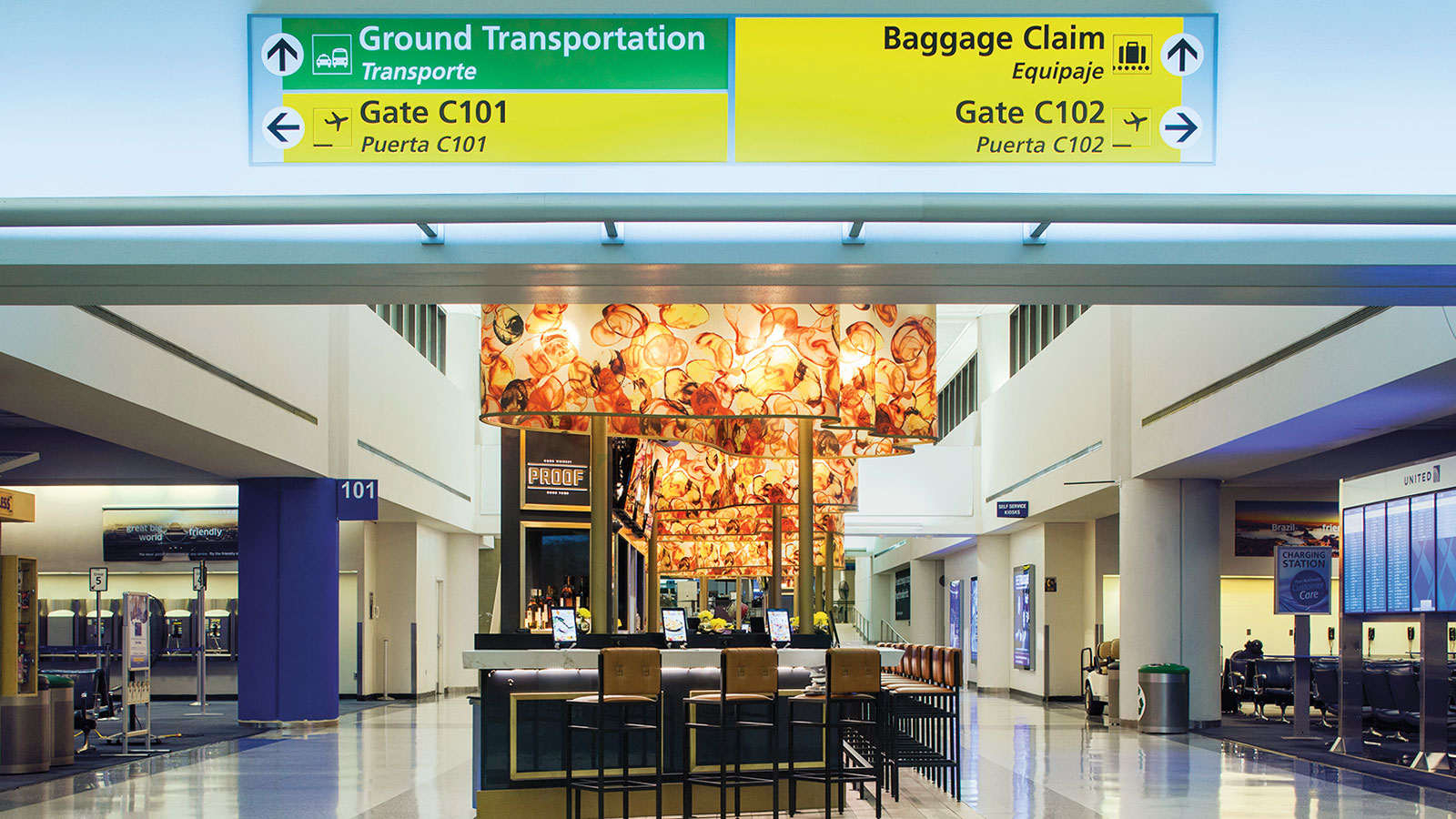 Once upon a time, air travel was a glamorous affair where well-dressed men and women kept their shoes on and idly sipped Manhattans before strolling straight to the gate for takeoff. Nowadays, travelers are lucky if they get to grab some overpriced mixed nuts or a can of Coke before being corralled to their cramped seats.

It doesn’t have to be that way, though. There are options for whisky lovers seeking a good drink and a little dignity before taking off. Next time you’re traveling through one of these airports, check in a little early and relax with a whisky cocktail, a generous pour on the rocks, or—yes, a flight.

Book & Bourbon Southern Kitchen—SDF, Louisville
Visitors to the Kentucky Bourbon Trail can start or end their trip at this restaurant and bar in the main Louisville terminal, designed to have the look and feel of a library. With over 85 bourbons, ryes, and American whiskeys, the bar also offers an array of cocktails, like the Peaches and Beam, made with Jim Beam bourbon, peaches, basil, and apple juice. Or choose from the five whiskey flights that start at $10 and go up to $101 for a selection of rare bourbons, like George T. Stagg, Angel’s Envy Cask Strength, and Pappy Van Winkle. A full menu of classic Southern comfort food means you can skip the stale in-flight sandwich.

High West Saloon—SLC, Salt Lake City
If you find yourself passing through Salt Lake City, don’t miss High West Distillery’s in-airport saloon. The full-service bar and restaurant features High West’s whiskeys, including Rendezvous Rye, Yippee Ki Yay, and Bourye. It also has a robust cocktail list, offering drinks like the Dead Man’s Boots, made with Rendezvous, tequila, lime juice, and ginger beer, and the Grand Duel, a spiced, bitter cocktail made with Double Rye and Lagavulin scotch. Pad your stomach with cowboy-worthy food, like a sourdough pretzel with whiskey-beer cheese, nachos, or a bison-angus burger.

Proof—EWR, Newark
Looming like an oasis in Newark’s Terminal C, Proof is a serious rival to the first-class lounge. New York City chef John Delucie had a hand in creating the food menu, which features light fare like panini and salads. But serious whisky lovers will focus on the drinks list, featuring over 160 single malt scotches, bourbons, ryes, and other whiskies, viewable and ordered from a tablet. Rarities include Pappy, Redbreast 21, and Macallan 25 year old; whiskeys from small American distillers (New Holland, F.E.W., Journeyman, Catskill, and others); and a few members of the Buffalo Trace Antique Collection. Bonus: settle your tab using cash, credit, or airline miles.

House Spirits Tasting Room—PDX, Portland
Technically it’s not a bar, but the House Spirits Distillery tasting room located in Portland International Airport’s Terminal C will scratch your whiskey itch. Get a free sample of House Spirits’ Westward Oregon Single Malt or try a cocktail flight ($20); the distillery’s other spirits—including Volstead Vodka, Krogstad Aquavit, and tasting-room exclusives like Crème de Cacao—are also available to taste. And of course, you can pick up a bottle to take home, no checked bag required.

Atlanta Stillhouse—ATL, Atlanta
Wrapped in galvanized metal panels like those found on a rickhouse, this bar located in Hartsfield-Jackson’s Concourse T has a list of over 30 bourbons and ryes, including its own exclusive Knob Creek 9 year old. Can’t decide what you want? Buy a preloaded card and pick a tasting of three whiskeys from the self-serve taps or choose from one of seven pre-set flights. There are cocktails, like a Bloody Mary made with Jim Beam Devil’s Cut, and plenty of whiskey-friendly food, from pulled pork sliders to a pimento cheese BLT. Best of all, Atlanta Stillhouse’s space includes a patio area that overlooks the tarmac, away from the crowds. It’s as close to relaxing as you’ll get in an airport.