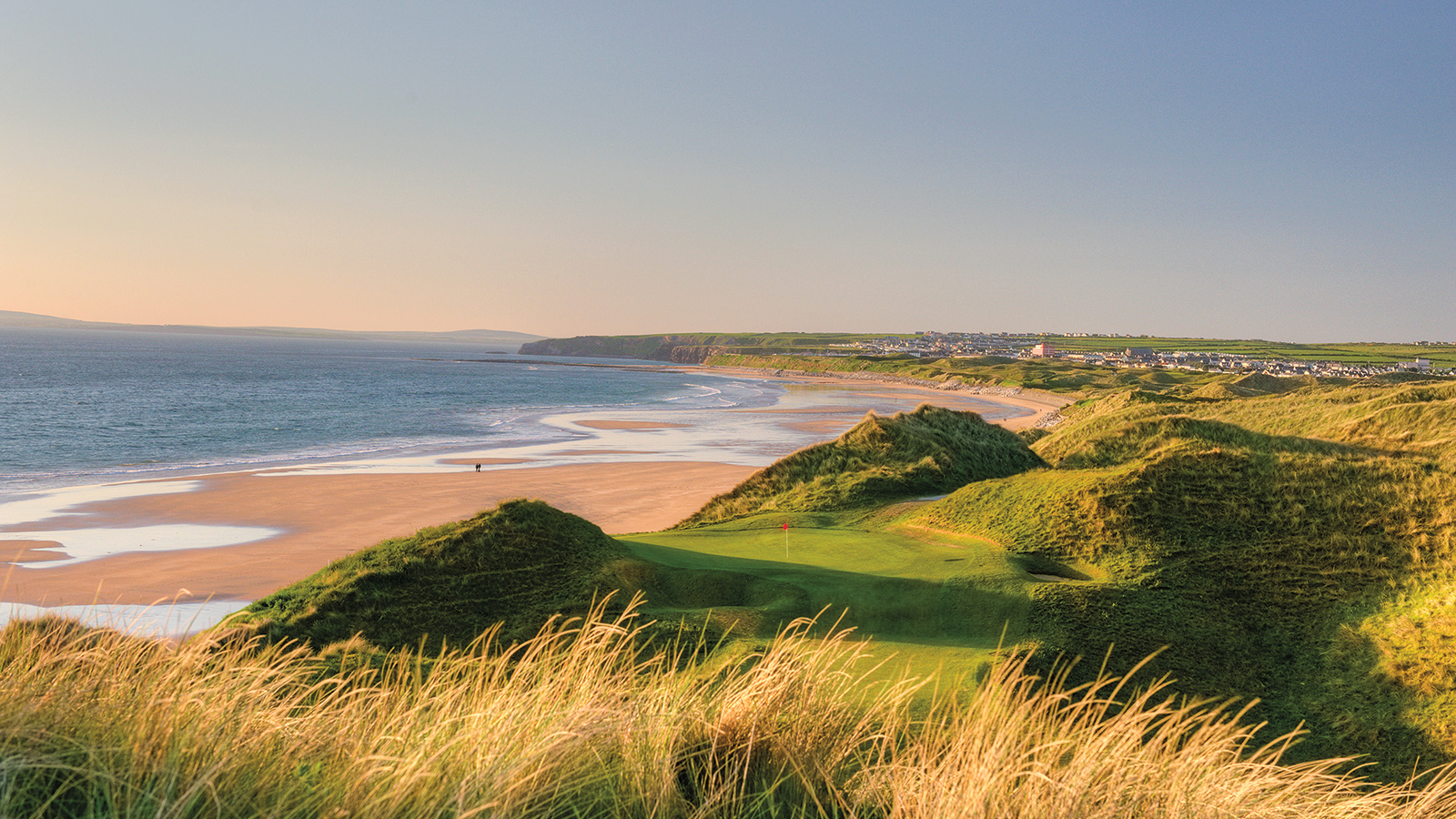 The 16th green at Ballybunion offers golf by the sea on Ireland's west coast. (Photo by Steve Carr)

In both the Republic of Ireland and Northern Ireland, the collection of links courses is so outstanding, you couldn’t possibly go wrong by just stopping in anywhere and seeing if there’s a tee time available. But if you are in search of the very best Ireland has to offer, our top five courses will fulfill your golfing dreams.

If you are drawn to golf by the sea, then you are certainly drawn to Ireland. Golfers from around the world, and especially the U.S., who make the pilgrimage to Ireland discover exhilarating golf and abiding people, a combination that makes for the perfect trip. For the ambitious traveler, a week should suffice, allowing ample time to reflect on each round over a few drams, either on the grounds or at a distillery, which these days are, more often than not, somewhere nearby.

On the north coast of Northern Ireland sits Royal Portrush, a handsome two-course facility that should be on anyone’s list, given it is now on the British Open rota.

The Dunluce Course at Royal Portrush will play host to the 2019 British Open, the second time it has done so—the only course outside of England and Scotland to host golf’s oldest major.

The Dunluce course is undergoing improvements associated with holding the Open, with the addition of two new holes, the lengthening of others, and a general shaping up of the entire facility. It was a good course as it was, though the final two holes were a bit boring and the 18th couldn’t accommodate the huge stands associated with the Open.

The Dunluce will have plenty of bite with its new teeth, but you should also consider playing its companion Valley course, which is as natural a links as you will find. Your nineteenth hole? The Bushmills Distillery is just 20 minutes away. 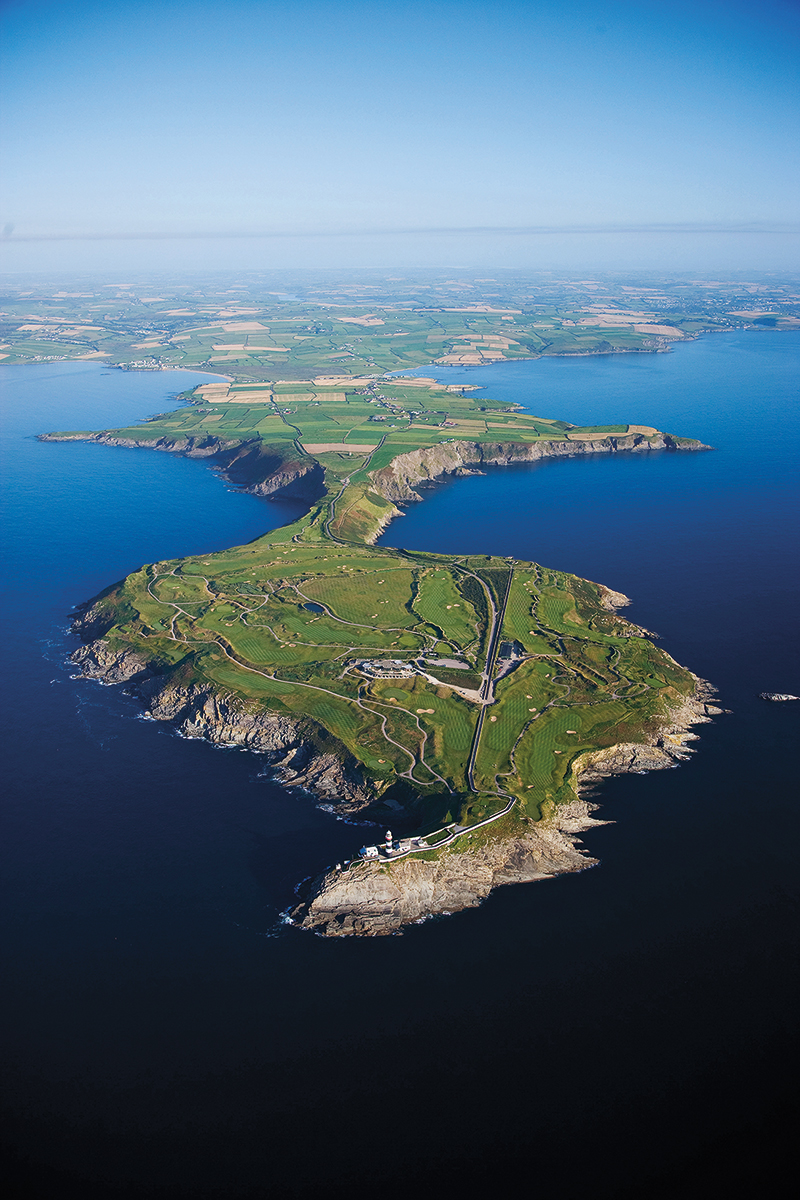 On the east coast of Northern Ireland, Royal County Down has been revered for decades as one of the world’s most challenging courses. As Northern Irishman and Open champion Darren Clarke says, “It is a sensational second-shot golf course.”

In saying that, he is also acknowledging that it a daunting first-shot course, with several blind tee shots needing to traverse very high sand dune ridges.  If the wind is up, it’s difficult to keep your ball down, but many find that challenge just the reason to take on Royal County Down. It also has a less daunting course available, the Annesley Links.

American golfers have been flocking to “BallyB” for more than three decades now, and they just keep coming back. About an hour and a half from Shannon Airport on the west coast, Ballybunion is easy to get to and tough to play when there is a freshening breeze.

The members of Ballybunion have undertaken a long-term renewal project, and all the greens surfaces, which had become tired and compacted, have been replaced. The work is a “polishing of the jewel,” as greens superintendent John Bambury says. There have been several cosmetic changes, including one big change on the horizon: a new 18th hole green site that will replace the somewhat disappointing finish.

It’s often been said that Waterville Golf Club, in the deep southwest of County Kerry, is the best course that will never host a British Open. Once you play it, once you immerse yourself in it, you will know why.

Sitting at the confluence of the Inny Estuary and Ballenskelligs Bay, Waterville has a wonderfully remote feel and a very close connection to the soul of links golf. Originally designed by the iconic Irish architect Eddie Hackett and updated by American Tom Fazio, Waterville flows naturally and is challenging through its remarkable landscape.

There is no more spectacular place in the world to play golf than the Old Head Golf Club. Perched on a rock table 270 feet above the Atlantic Ocean, Old Head is a headland course, not a links, but its remarkable site has been dropping jaws since it opened in 1997.

Nine holes, including four of the five par 3 holes, play right along the edge of the cliffs. The tee box at the par 5 12th is breathtaking, especially when sea birds are flying into their rookeries in the sea-level caves below.

The Old Head is near Kinsale on the south coast and it’s only about a hour and change to drive to Jameson’s Old Midleton Distillery.