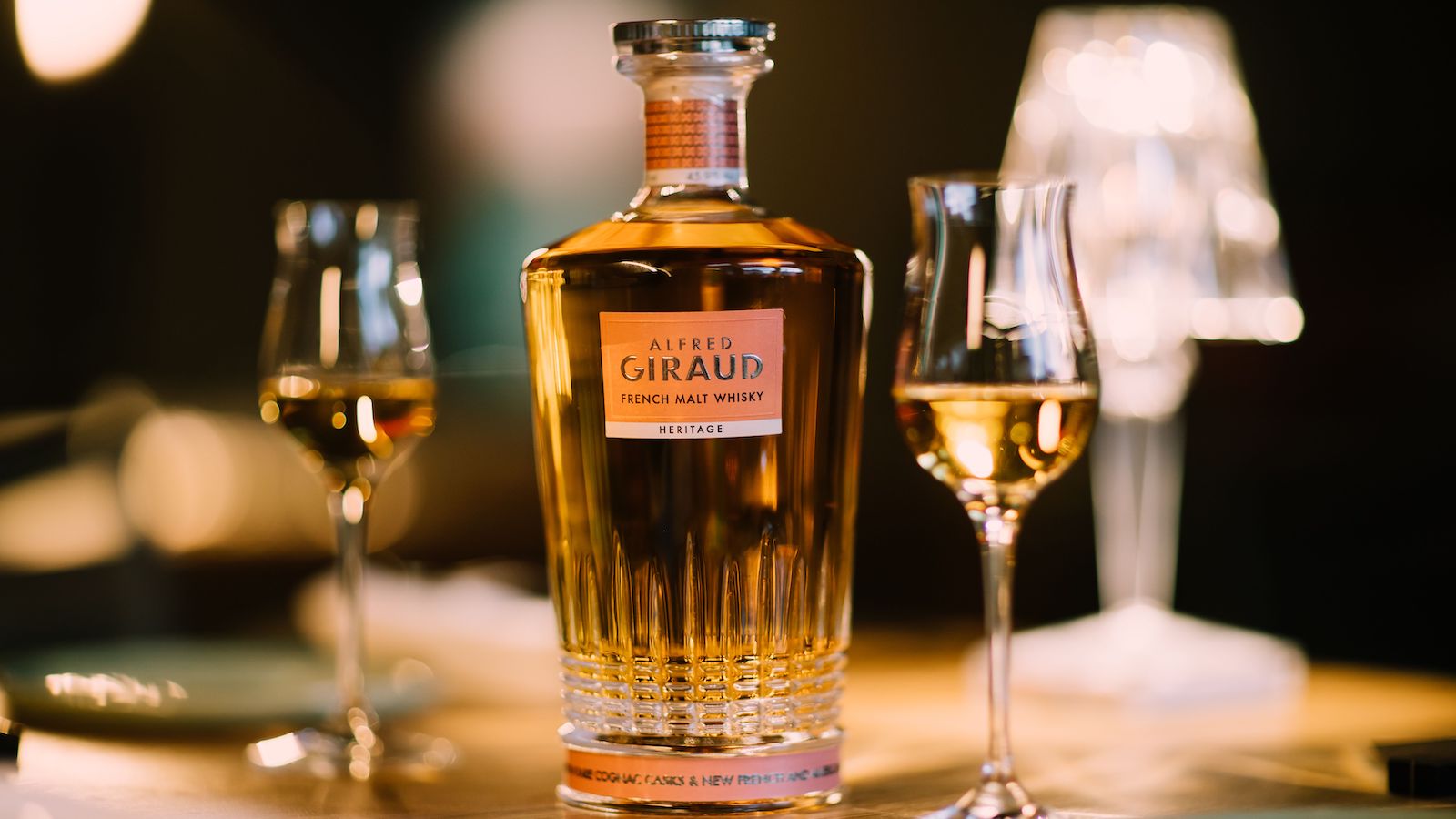 Blended from three French single malts and finished in rare cognac casks, Alfred Giraud whisky is aiming for a spot in the luxury sphere.

France produces some of the finest luxury goods in the world: perfume, jewelry, wine, and fashion. Its fine wines and cognacs command high prices and top auction bids, prized for their quality and collectibility. Now, a new producer is looking to add whisky to that illustrious list.

Alfred Giraud, a blended malt French whisky, is launching in the U.S. this month with two expressions: the unpeated Heritage, priced at $155, and its peated sibling Harmonie, which is $190. There are less than 1,000 bottles of Heritage for sale here, and just a few hundred of Harmonie. Currently available in France and New York, the whiskies will eventually be sold—in similarly allocated amounts—in London, Hong Kong, and Shanghai.

Such high prices and their accompanying small bottle counts aren’t uncommon, but they’re usually reserved for rare, age-stated scotch or Japanese whiskies. Little more than three decades old, France’s whisky industry is still in its nascent stages, and the majority of its 60-plus producers are micro in scale, selling everything they make locally. The whiskies are high-quality, but hardly primed for Macallan-level pricing.

But Philippe Giraud, who founded Alfred Giraud in 2012, sees opportunity. “People looked at me like, ‘You’re crazy. French whisky does not exist,’” he says. “But we said, ‘Hey, there is no reason why France one day will not be a major player in whisky. We have the know-how, the expertise, the supply chain, the logistics, the climate, the ingredients. We have the cognac, the armagnac, the champagne, the wine, the calvados. Why no whisky?’”

Although it’s a new product, Alfred Giraud has a compelling backstory. Philippe is descended from a line of coopers and cognac cellar masters; his great-grandfather Alfred, for whom the brand is named, was the cellar master at Rémy Martin cognac for over 30 years. Philippe himself worked for Rémy and, later, for Balvenie and Glenfiddich owner William Grant & Sons, and he hired two cognac cellar masters to help create the Alfred Giraud brand: André Giraud, Philippe’s uncle, is 95 years old and helps source the rare cognac casks for aging the whisky, while Georges Clot, another retired Rémy cellar master, serves as master blender for the brand.

“Our expertise is in blending,” Philippe says. “Typically in a cognac, you have up to 50, 60, 70, sometimes 80 different [liquids]. Cognac is very much about blending, even more than whisky. So we wanted to acknowledge and use our expertise as cognac blenders and apply it to the whisky category.” 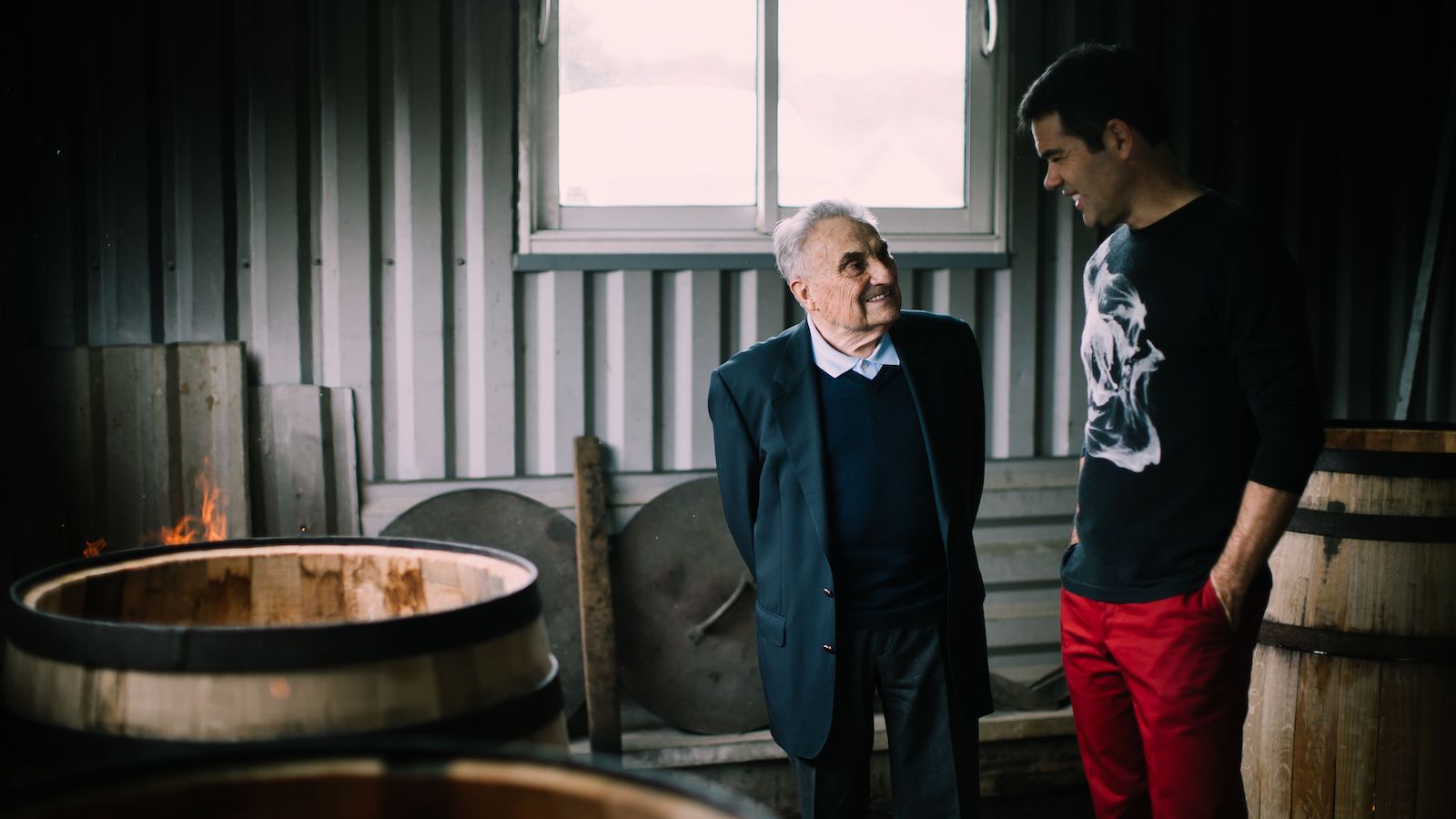 With over 80 years of experience in the cognac industry, André Giraud (left, with Philippe Giraud) lends his expertise to the whisky brand, sourcing rare casks as well as Limousin oak for new casks.

Both Heritage and Harmonie are “triple malt” blends sourced from three distilleries: Rozelieures in Lorraine, Warenghem in Brittany, and a producer in Cognac. In 2017, Alfred Giraud partnered with Société des Vins et Eaux-de-Vie (SVE) to make its whisky at the Saint-Palais Distillery; the facility produces cognac from October to March and whisky and other spirits during the rest of the year. As its own liquid ages, Alfred Giraud will incorporate it into the blends, but it intends always to source other whiskies for blending variety.

Philippe says that what makes Alfred Giraud unique is its use of so-called rare cognac casks—those that held aging cognac for decades before being emptied and used for the whisky. André Giraud, who has worked in Cognac for 80 years and has wide-ranging connections across the region, helps source these casks. “Everybody knows him and he knows everybody,” Philippe says. “And he tells us, you go there, and you buy one cask there, you buy two casks there, this guy needs to finance the wedding of his daughter, so there’s one cask of 16 year old cognac and you buy it there.” In addition, André’s wife owns a forest in Limousin, from which he also sources new oak for the small amount of unused casks that are employed in the maturation process.

The “rare” casks have typically spent decades in the chais of Cognac, underground cellars whose cool and damp conditions allow the spirit to age much longer than the average scotch or American whiskey. Once the cask is emptied of cognac, Alfred Giraud fills it with unaged spirit—but the wood itself still holds several liters of old cognac which, over time, seep into the aging whisky. “When we buy ex-cognac casks, we make sure that they are not dry; we look for cognac casks that have what we call vidange in French, meaning they had been containing cognac just before we use them,” Philippe explains. “You cannot add anything [into the whisky], but it’s very legal to use ex-cognac casks, which carries [some amount of] cognac in the wood. So in fact when you taste [Alfred Giraud], you will feel the smoothness of the cognac.”

Although Alfred Giraud’s volume is intended to be small—that’s part of what makes it a luxury whisky, after all—Philippe aims to increase the amount available over time through both single-cask releases and additional blends that incorporate less of the rare cognac cask-aged liquid. “We have a physical limitation in how many very old cognac casks we have access to,” he notes. For now, it remains to be seen how Alfred Giraud is received by whisky drinkers.

While France’s whisky industry is still in its infancy, the Cognac region is one potential hotspot (along with Brittany and Alsace, which both have geographical indications for whisky). Located in the heart of the country, it has easy access to everything necessary for whisky production: high-quality grain, forests and cooperages, numerous distilleries, and locals with expertise in distilling, blending, and other related skills. And because cognac can only be distilled from October to March, the distilleries can be put to use during the rest of the year, making everything from vodka, like Grey Goose and Cîroc, to gin (G’Vine) to whisky. Along with Alfred Giraud and the Saint-Palais Distillery, other whisky producers in the area include Brenne, Bastille, and Vicomte.

Thirsty for a taste of France? Try these high-scoring whiskies.