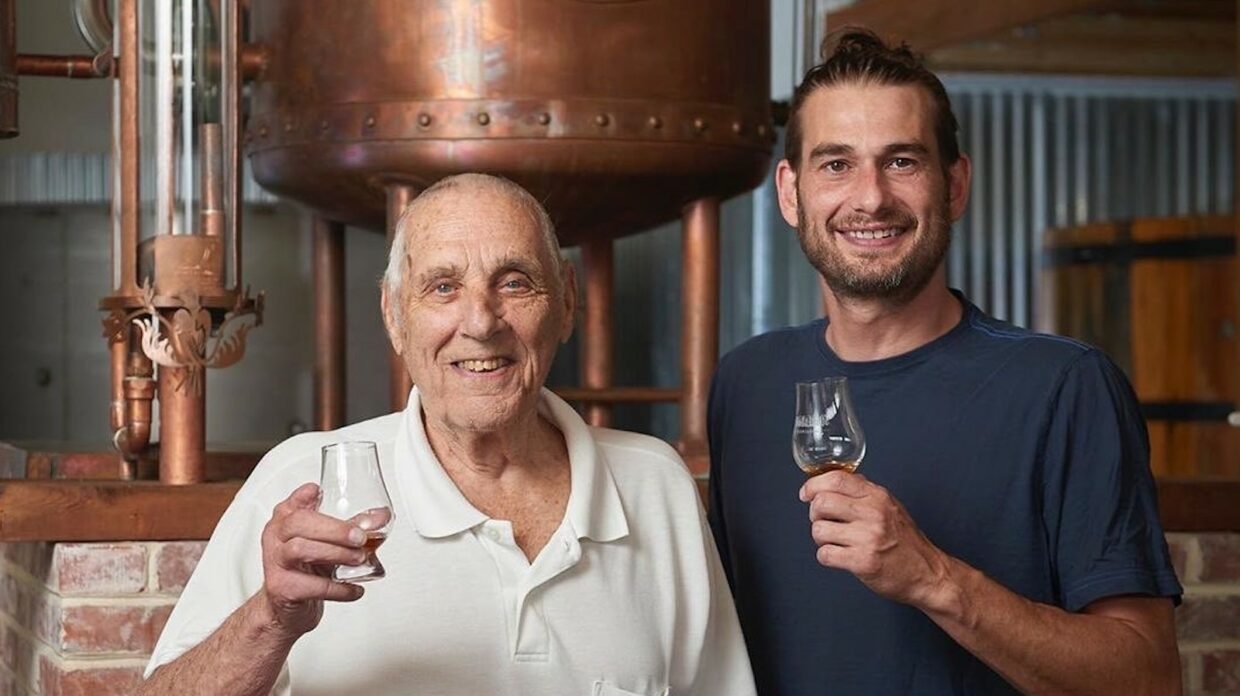 Dick Stoll (left, with partner Erik Wolfe) died on Aug. 13, 2020. He kept alive a legacy of Pennsylvania distilling experience, passing it on to a new generation. (Photo by Jordan Bush Photo)

Dick Stoll, the last of the old-time Pennsylvania distillers, passed away on Aug. 13 at the age of 86. Though his name may be unfamiliar to many, he made significant contributions to American whiskey history.

I’m proud to have been a friend of Dick’s; in fact, he was the man who sparked my love of whiskey. We first crossed paths on my last visit to the beautiful old Michter’s Distillery in rural Lebanon County, Pennsylvania. It was November 1989, and as I left the Jug House, the on-site whiskey store (the only one in the country at the time), I noticed an open warehouse door and walked inside. My first impression was how empty the building was, nearly bereft of barrels, with two men dumping them into a trough. I approached and we struck up a conversation. One of them offered me a taste straight from the cask, and I was hooked. For me it was the beginning of a life as a whiskey enthusiast. For the distillery, it was nearly over.

Decades later, I learned that gracious man was Dick Stoll.

Working His Way Up

Dick was born in 1933 and raised in Lebanon County, among woods and farmland, and became an outdoor enthusiast at an early age. For the rest of his life he would enjoy many sports, chiefly hunting and fishing, which he pursued to the end. He had an irrepressible sense of humor, almost like a little kid, and a joie de vivre that could be felt by anyone who fell prey to his pranks.

Dick enlisted in the Navy and served in the Korean War, and upon discharge applied for employment at what was then known as Kirk’s Pure Rye Distilling Co. (later to become Pennco, then Michter’s) and was hired as a laborer. With a strong back and work ethic, he quickly rose through the ranks to become head of maintenance. The head distiller at that time was C. Everett Beam (grandnephew of Jim Beam), who took note of Dick’s intellect and dedication to his job, and began training him as his apprentice. Dick learned quickly and became a trusted understudy to the master, whom he fondly called Charlie. 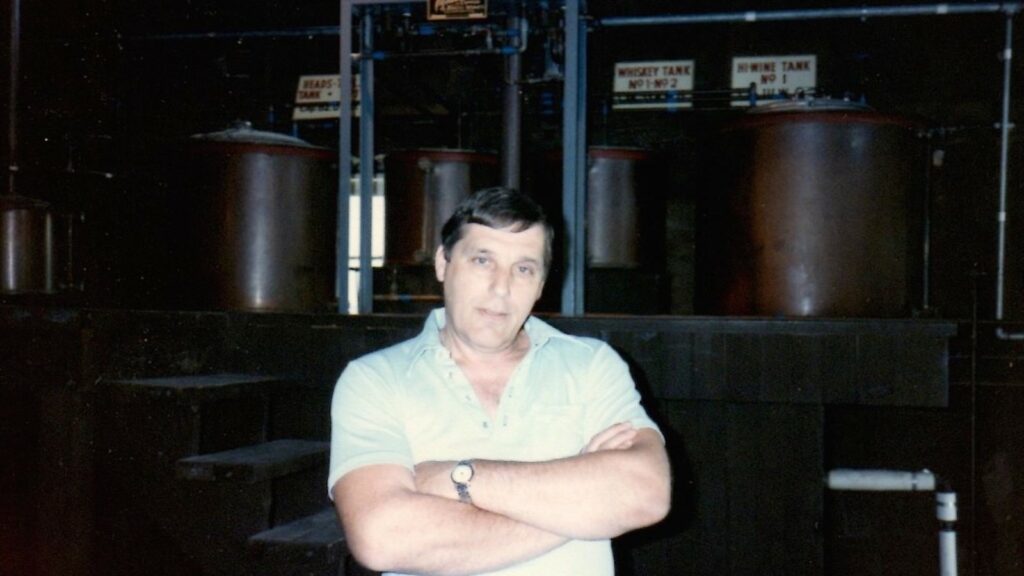 For most of his career, Dick Stoll made whiskey on column stills, but learned how to do batch production on pot stills in the 1970s at Michter’s.

It speaks to Dick’s work ethic that at one point he noticed that distillery upkeep seemed to be lagging in his absence, and offered to leave Beam’s tutelage to return to maintaining the physical plant. “He understood that equipment was critical to the process and product,” says Erik Wolfe, who would partner with Dick decades in the future. Beam turned him down and continued the training.

Upon Beam’s retirement in 1972, Dick took over production, stewarding the distillery through a number of owners and a transformation in the early 1970s from mere industrial site to a major tourist attraction. Records dating to 1753 had been discovered at the distillery, by then known as Michter’s, making it the longest-operating distillery site in the United States, if not the world. It was registered as a National Historic Landmark, and tourism boomed as the American bicentennial approached.

To capitalize on the excitement, management commissioned Vendome Copper & Brass of Louisville to construct an entire “mini distillery,” consisting of cypress fermenters, two copper pot stills, and a worm tub condenser. The setup (which now operates at the Michter’s Fort Nelson Distillery in Louisville, Kentucky) was installed in the oldest structure on the property, the two-story, wooden Bomberger Distillery building, which stood directly adjacent to the massive brick-and-glass tower that housed the modern column still. Dick, who had only distilled on a column up to that point, had to learn batch distilling—but he was up to the challenge.

According to Wolfe, Dick’s feeling was, “What’s the fun in learning a skill that can be mastered in a couple of weeks, or even years?” Once he had learned to make whiskey on the pot-still system—at the time, an archaic setup that had virtually disappeared from the U.S.—Dick became the only man in the country to run both column and pot stills until the onset of craft distilling.

From Peak Whiskey to Closed Doors

During this time, Michter’s offered tours, and guides ushered visitors around the site. One tour guide, Elaine Gouker, commented to a co-worker about the handsome man running things. That person told Dick that he should ask Elaine out. Dick, ever the “romantic,” took Elaine to see Clint Eastwood’s shoot-’em-up Western “The Outlaw Josey Wales” on their first date, and Elaine says that afterward she “grilled him about the whiskey-making process” to become a better tour guide. 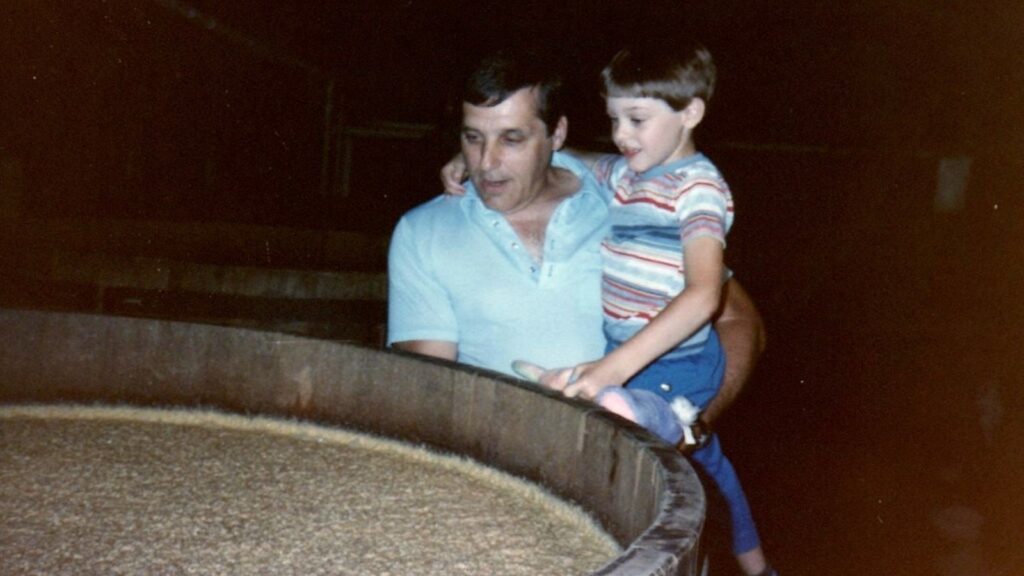 Dick and his son, Josh, checking on fermentation in the 1970s

They were soon married; Dick was 42 and Elaine 23. It was the first marriage for both, and they had a son, Josh. When asked why it took so long for this rugged, handsome man to get hitched, Elaine says, “He was too busy working and hunting and fishing!”

By the 1980s, whiskey was declining, and Michter’s was not immune. By now the last distillery operating in Pennsylvania, it was a shell of its former self after a series of questionable ownerships had wrung most of the available capital into private pockets instead of reinvestment. During this time, Dick distilled a batch of bourbon for Adolph Hirsch, who he called “a friend of the distillery.” It was the same mashbill as all of the bourbon distilled there, but since Hirsch was in no hurry to retrieve it, the whiskey aged far longer than usual. As Michter’s floundered, the barrels’ then-owners, the Hue brothers of the Cork & Bottle liquor store chain, retrieved them. That batch became the vaunted A.H. Hirsch bourbon, mostly bottled at 16 years old and widely recognized as one of the greatest American whiskeys ever.

Distilling slowed, then ceased, until only the remaining stocks were being bottled, depleting inventory in the distillery’s single-story “flathouses.” The bank that held the note called Dick on Feb. 14, 1990 and told him to lock the doors. It was over.

On my next visit, in May 1990, there was a handwritten note on the window of the Jug House door, posted by Dick months earlier: “Closed until further notice.” Despite the hopelessness of the situation, he was not ready to really give up on whiskey.

After Michter’s closed, Dick took a construction job at age 57, then became head of maintenance at a Lebanon County school district, from which he eventually retired. He and Elaine enjoyed travel, which often included visits to the craft distilleries that were popping up across the country. Meanwhile, a young couple living in New York City, Erik Wolfe and Avianna Ponzi Wolfe, were thinking about moving back to Erik’s native Lancaster County when they realized that the former Michter’s had once been recognized as the country’s oldest distillery, and that its last distiller was still living in the area. 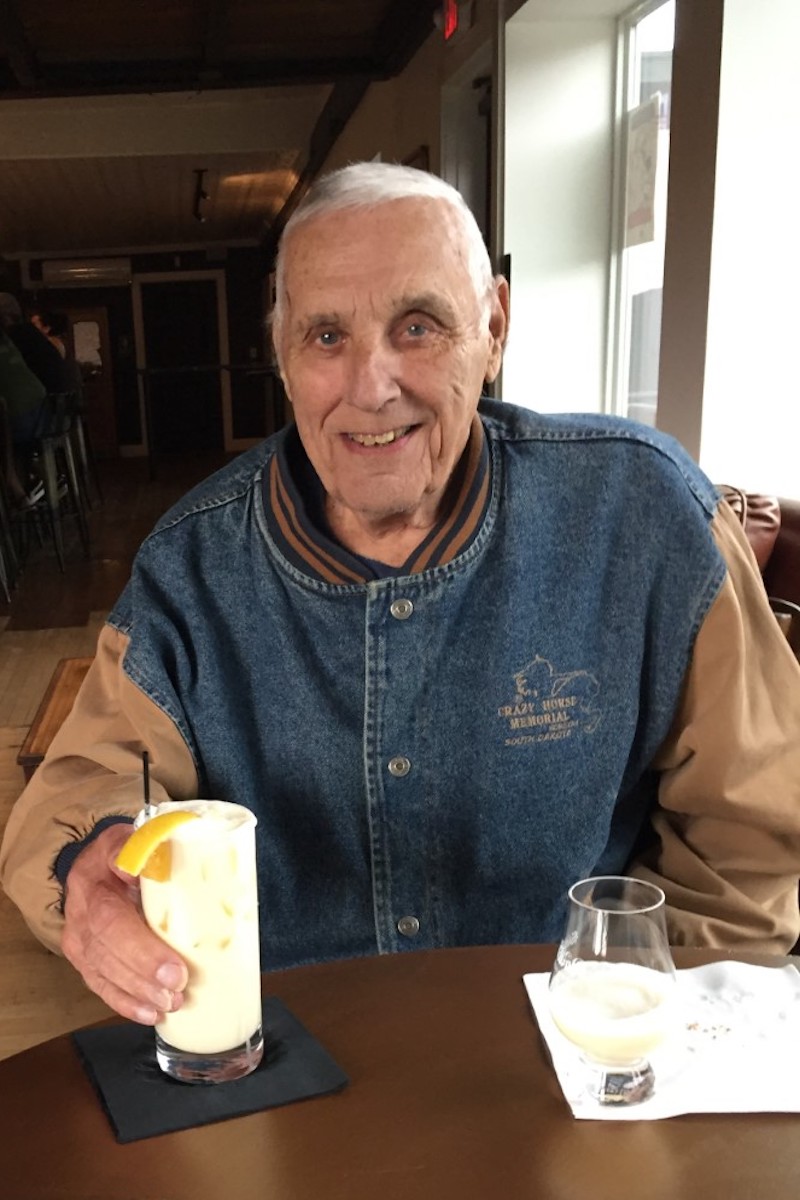 Long after retirement, Dick Stoll re-entered the whiskey business as a partner in Stoll & Wolfe Distillery in Lititz, Pennsylvania.

In 2013, Erik Wolfe contacted local Michter’s historian Ethan Smith, who had been acting as Stoll’s unofficial gatekeeper and vetting the occasional aspiring distiller who wanted to get in touch with Dick. Smith arranged a meeting and, according to Wolfe, “Two months later I was at Ethan’s place with papers strewn about Dick’s feet, peppering him with a seemingly endless list of questions. Despite his experience, knowledge, and well-deserved reputation, he indulged me completely and treated me as an equal from the moment we met. The only time he interrupted or corrected me was to demand I stop referring to him as Mr. Stoll.”

Dick agreed to partner with the Wolfes to revive the distilling traditions he’d been taught by Beam and pass them along to a new generation. Erik adds, “Dick never lost his passion for distilling or the desire to make whiskey, he just lost the opportunity.”

Trained as a hands-on distiller, Dick mentored Wolfe as an apprentice, using practical applications in traditional methods. “Although he was aware of his own mortality, he often told us to ‘take the time and do it right,’” Wolfe says. “He often said he didn’t come out of retirement to rush it or make bad whiskey. Hence, every step of our process is the direct result of his experience. I once joked with him that we have an ‘R&D department.’ It’s research and whatever Dick says.”

The enterprise was named for its partners, Stoll & Wolfe—a fitting namesake for such an important American distiller. Erik says, “They don’t make men like Dick Stoll anymore. He straddled two eras, defined by the past yet helping to define the future.”

Dick was cremated and interred with full military honors at Fort Indiantown Gap National Cemetery. His accomplishments were many, but most important, to my mind, is that his determination and longevity enabled him to maintain, by the slimmest thread, a historic line of Pennsylvania distilling experience stretching back 250 years.

Dick never considered himself a master distiller, though he no doubt deserved the title. Years after first meeting him in that warehouse, after we had become friends, Dick opened his wallet and presented me with a dog-eared business card from his days at that now-demolished Lebanon County distillery. Beneath an embossed Michter’s logo, flattened by 25 years in his back pocket, it read simply “Richard H. Stoll, Distiller.” I think that says it all.