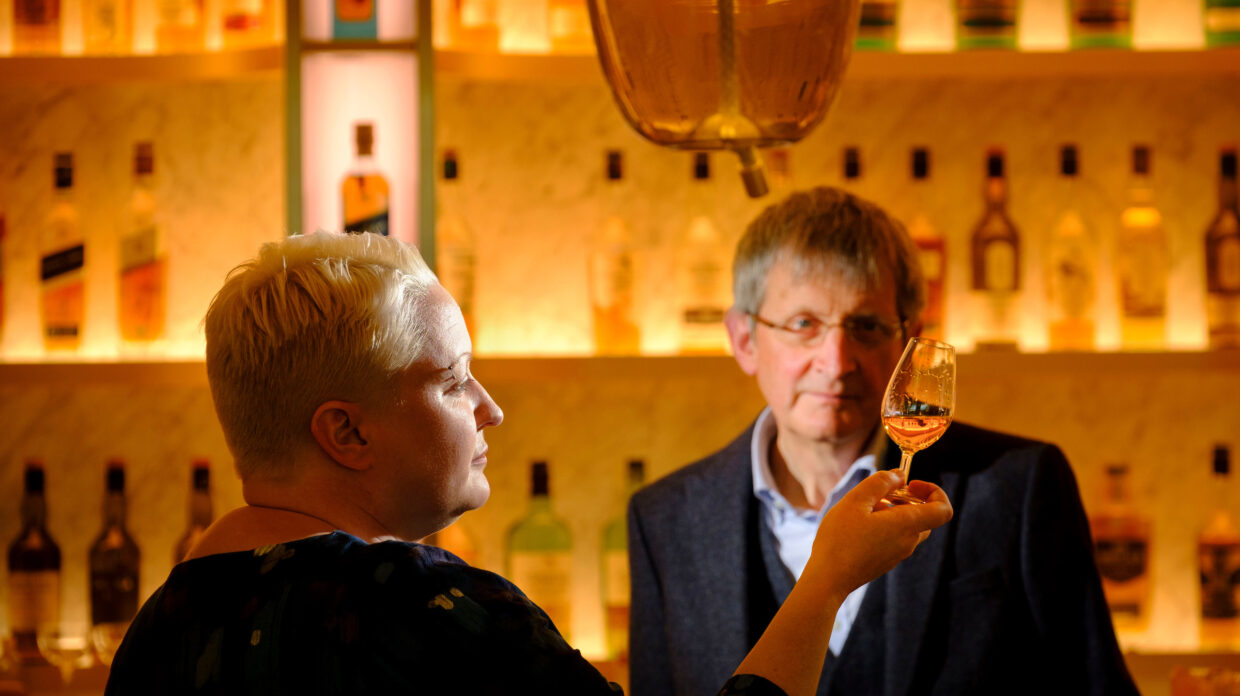 Dr. Emma Walker is appointed the new master blender for Johnnie Walker, succeeding Dr. Jim Beveridge, OBE who is retiring after more than 40 years at Diageo.

At the start of the new year, Emma Walker will assume the mantle of master blender for Johnnie Walker, in charge of the flavor of every expression under the Johnnie Walker name. She will succeed outgoing master blender Jim Beveridge, who has served in that role for over 20 years, having started as a chemist for Diageo’s forerunner company United Distillers more than four decades ago.

Beveridge leaves a major imprint on Johnnie Walker, the world’s number one scotch whisky brand, which is styled as a blend of malt and grain whiskies from the four corners of Scotland. Today’s range—with its core bottlings, Travel Retail exclusives, and limited editions—is unrecognizable from what it once was. For much of the 20th century, Johnnie Walker drinkers had a simple choice—Red Label or Black Label. Beveridge helped change that dynamic entirely, creating manifold bottlings that jolted new energy into the Johnnie Walker canon. 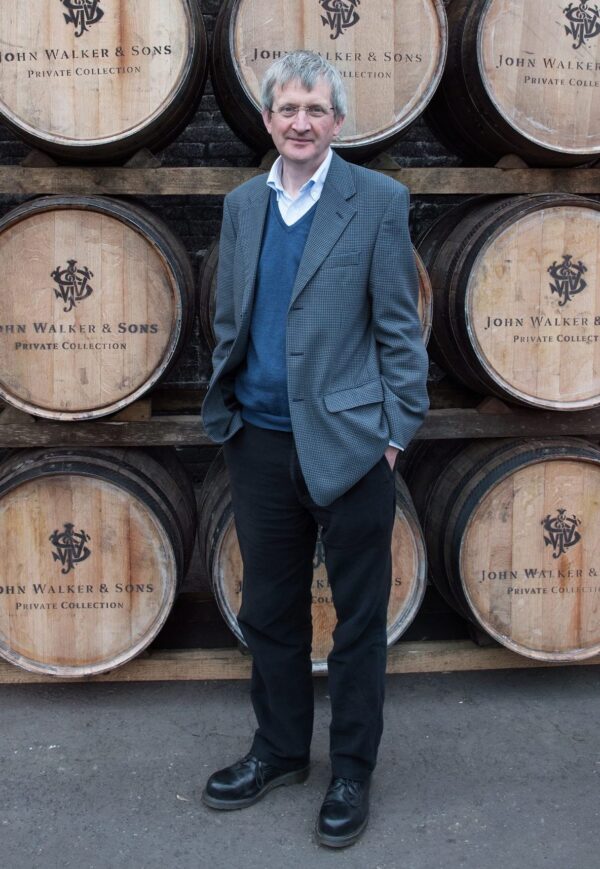 Jim Beveridge, who has been Johnnie Walker’s master blender for the last 20 of his 40-plus year career with Diageo, will retire at the end of the year.

Johnnie Walker Oldest came along in 1987 and was renamed Johnnie Walker Blue Label in 1992, with Beveridge maintaining its consistent quality and finding the inspiration to create other derivations. The release of John Walker & Sons King George V in 2006 catapulted Johnnie Walker into a new level of ultra-luxury territory. Johnnie Walker Double Black, which Beveridge counts among his proudest achievements due to the blending challenge of devising the extra smoky new recipe, debuted in 2009. With the launch of Johnnie Walker Platinum and Johnnie Walker Gold Label Reserve in 2012, Diageo leaned into the shift from neat pours toward scotch whisky cocktails.

John Walker & Sons Odyssey, a blended malt composed of single malts from just three distilleries, came next—backed by a glitzy global campaign that carried the message aboard the 157 yacht Voyager, which called at key ports around the world before returning to Scotland. From 2014 onward, Beveridge oversaw the development of the upscale John Walker & Sons Private Collection, an annual series that deconstructed the key flavors of the blend from smoke and dried fruits to the rich oak and honeyed grains. These key bottlings changed the conversation around blending, but are just a few selections drawn from a portfolio of riches, and in 2019, Beveridge was honored with an OBE from Queen Elizabeth II for services to the scotch whisky industry.

Enter Emma Walker, who joined Diageo in 2008, initially as a project scientist. Born in Fife on Scotland’s east coast, she left an apprenticeship with ICI, a large British chemical company on Teeside, to study chemistry in Edinburgh, and later completed a Ph.D. in Sheffield. “When I came up to Edinburgh I made a group of friends, including my partner Dave, and they introduced me to scotch,” says Walker in an accent still influenced by her formative time spent in the northeast of England. “They were smoke fans, so my introduction to scotch was Lagavulin and Talisker—which some people think is an odd way to start, but it was really good for me. When you’re starting on your whisky journey, it can be difficult to pick up some of the more delicate notes, and I always liked big, bold flavors.” 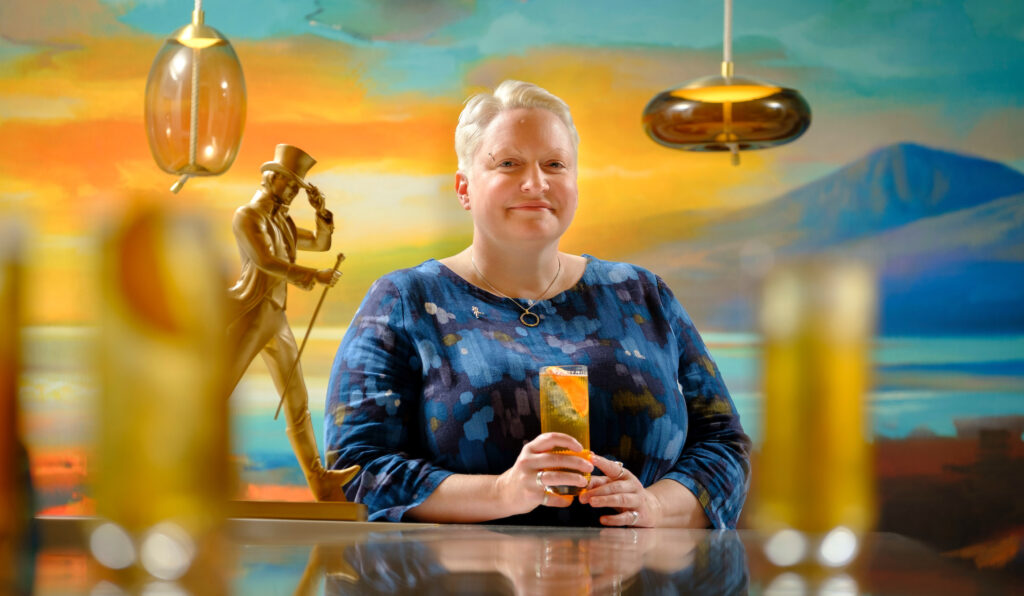 Dr. Emma Walker joins a small, select group of people, and becomes the first female, to take on the coveted role of Master Blender in the 200-year Johnnie Walker story.

Walker worked with Diageo’s whisky team for 4 years, alongside Beveridge and others, completing her distilling diploma and immersing herself in understanding how flavor is created in the distillery and in the warehouse. She studied how the quality and consistency of the blends were maintained, developing knowledge of Diageo’s distilleries and the character of each individual whisky, as well as discovering how those components could be combined. With her science and engineering background, she relished field visits to different distilleries to understand how the whisky supply chain worked, visiting Auchroisk Distillery and Diageo’s northern warehousing, then adding spells as a quality technical specialist at Diageo’s Leven site, and a trainee distillery manager at Knockando Distillery to her experience. She then returned to the whisky team in 2014, ready to apply all that practical knowledge to focus on honing her blending skills under Beveridge and his fellow master blenders. “Jim is great at being able to break down a big issue and translate it in a way that makes sense to you at that point in time,” she says. “He’s guiding you to think it through and work it out, which is a huge skill. Jim has encyclopedic knowledge, and alongside blenders such as Maureen Robinson and Caroline Martin, there’s just been so much knowledge and experience on the team. Jim enjoys learning from new people too, so he’s never closed off to learning and understanding other people’s perspectives.”

As an example, Walker and her colleagues drew on the views of bartenders and brand ambassadors to share how blended whisky was being consumed and enjoyed around the world with Beveridge, finding new ways of discussing flavor. They refined these approaches to consider how to mix flavors and devise different serves.

In 2016, Johnnie Walker introduced Blenders’ Batch, the result of a slew of experiments in flavor that helped present Johnnie Walker in a new light—a bit less stuffy and self-referential. The debut label, Johnnie Walker Blenders’ Batch #1 Red Rye Finish, was co-signed by Emma Walker and Jim Beveridge, a key moment as Diageo began to nudge some of their young protégés into the spotlight. “That was so much fun for us to do,” says Walker. “We looked at smaller pockets of stock to really explore their flavors, finding flavors that we see in scotch but don’t often see coming to the fore.” These conversations between the next generation of blenders and their seniors fostered a new creative milieu, and a perceptive Johnnie Walker drinker will be able to discern the influence of Blenders’ Batch on new expressions for years to come.

Johnnie Walker Will Stride in a New Direction

Walker’s new role carries different challenges and responsibilities to those Beveridge faced at the outset. “One of the big things is going to be scale,” she notes. “If you think of just how many people are buying whisky around the world, how much whisky we’re making, and the range of Johnnie Walker whiskies we’re producing, it’s really quite different from when [Jim] started.” Walker cites the whisky team as Beveridge’s lasting legacy—a team of 12 blenders that he has trained. “It’s the one thing that Jim was always passionate about,” shares Walker. “He wasn’t working alone—it’s always been with a team of people around him. It’s no different now. The day will always revolve around nosing whisky and talking about flavor, it’s just that it will now go in a slightly different direction. We’ve got a lot of exciting things coming through, such as the new Johnnie Walker High Rye, and we’re looking at what experimental styles to lay down, what new things we can do with casks, and how we can play with flavors in different ways.”

Master blender for Johnnie Walker is one of the most high-profile positions in scotch whisky, and in Emma Walker, Diageo appears to have found a new principal blender with a rigorous, innate inquisitiveness, and a flair for creativity inspired by the sensibilities of the contemporary whisky lifestyle.