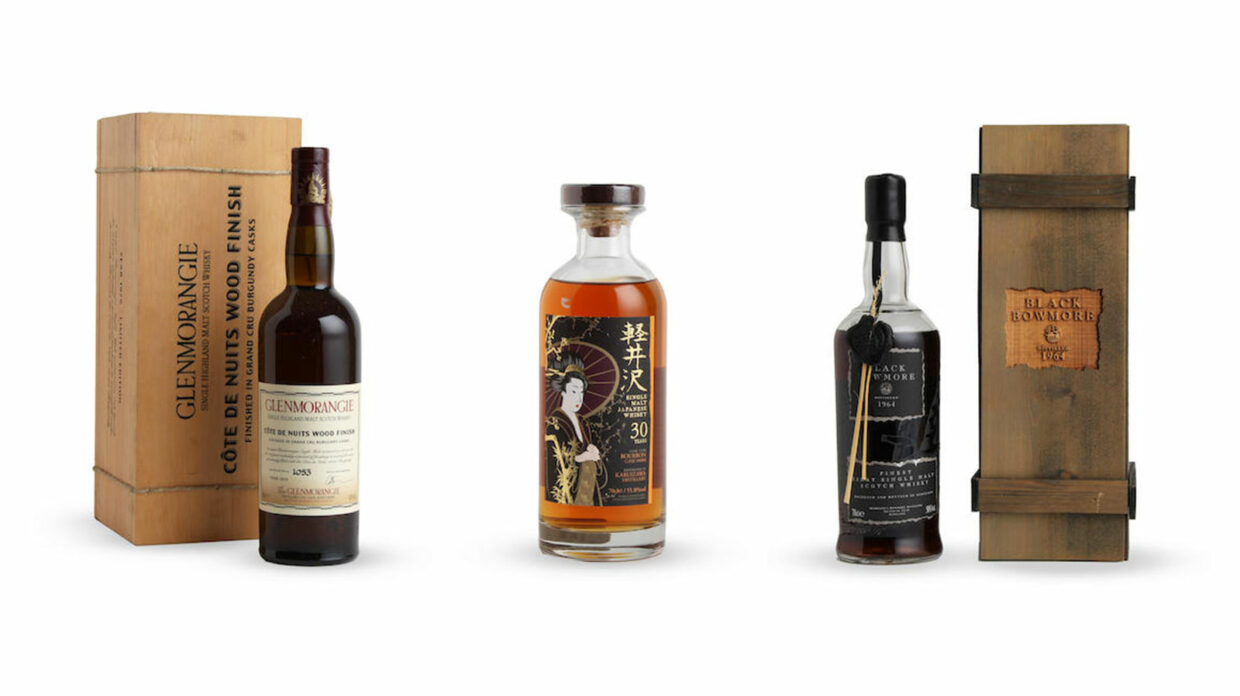 The upcoming Bonhams, Edinburgh auction features a range of single malts from Glenmorangie, Karuizawa, Bowmore, and others.

As Scotland takes its first steps out of lockdown, Bonhams, Edinburgh is making a welcome return with an enticing sale for the single malt lover on June 10. After last year’s run of hit and miss sales, Bonhams has put together an accomplished and compact sale of quality whiskies which will be conducted live but “behind closed doors” with the auctioneer marshaling absentee bids against the incoming phone and online bids. On offer are 395 bottles in 183 lots, which Bonhams estimates to be worth $294,000–$354,000.

When sizing up an auction, it’s easy to become distracted by the big-ticket items (see table below), but it’s always worth doing a little background research. Few bottles in this sale will sell for more than $10,000 but, in general, Bonhams has stuck with estimates that are conservative yet attractive. Bargain hunters should not miss out on the multi-bottle lots.

The sale has a preponderance of Glenmorangie rarities with nearly 80 bottles to choose from, led by 1963 Glenmorangie 22 year old. This collection encapsulates the simpler yet distinctive Glenmorangie packaging from the ’90s that predates current owner Louis Vuitton Moët Hennessy’s luxurious branding: Here, you’ll find blanched almond-colored labels dressed in a subdued palette of claret reds and chocolate browns, some hand-signed by then-distillery manager Dr. Bill Lumsden.

Collectible Glenmorangie rises in value sedately; these aren’t “flippable” bottles that are likely to jump in value and reappear with higher estimates in a year or two. Instead, the pleasure for collectors is in owning vintage whiskies from 1971, 1972, 1977, and 1979 or in the opportunity to taste some of the earliest experiments in scotch whisky finishing. The Bonhams offerings appear to be one of the best Glenmorangie collections to come to the market for some time, featuring scarce bottlings like the 1975 Glenmorangie 25 year old Côte de Nuits Wood Finish, the Glenmorangie 30 year old Oloroso Cask Finish, and the wonky-shaped 1971 Glenmorangie Culloden and Glenmorangie Last Christmas at Leith, a bottling from 1995 that commemorates the company’s headquarters move from Leith to Edinburgh’s New Town.

Elsewhere, the sale boasts 12 bottles of whisky with distillation dates before 1950, including independent bottlings of Macallan, Glenlivet, Glen Grant, and Mortlach. There’s also a wide choice of 35 bottles of single malt from closed distilleries including Karuizawa from Japan, Port Ellen, Glenugie, Convalmore, Brora, St. Magdalene, and Rosebank, plus two whiskies with unique origins, made at malt distilleries which were built inside grain distilleries: Ayrshire from the Ladyburn distillery at Girvan, and Ben Wyvis from Invergordon. An education for the palate is in store for those prepared to open their winnings and experience the liquid history inside.

The smart buys are the Macallan Raffles Hotel and the Clynelish 14 year old. This isn’t contemporary Clynelish 14 year old, but rather a rarely seen bottle that contains whisky distilled at Brora, which was called Clynelish until the modern Clynelish distillery opened in the late 1960s. The 1964 White Bowmore 43 year old may deliver the big moment of the sale (one just sold for $16,200). Shoring up the list below are bottlings such as the 1938 Macallan Rinaldi import and two 1964 Glenfiddich 47 year olds that have gone unsold at previous Bonhams auctions.  Another bottle that failed to sell in March 2020 was a 1964 Black Bowmore First Edition that has slightly leaked inside the box at some point and has a hairline crack in the wax capsule. If you want a long-term investment, it’s probably best to look elsewhere for a bottle in better condition, but if you plan to drink it, then there’s plenty of liquid left even with its low shoulder fill— and Bonhams has lowered its estimate substantially, from $10,300–$12,800 in March to $6,200–$11,200 now.