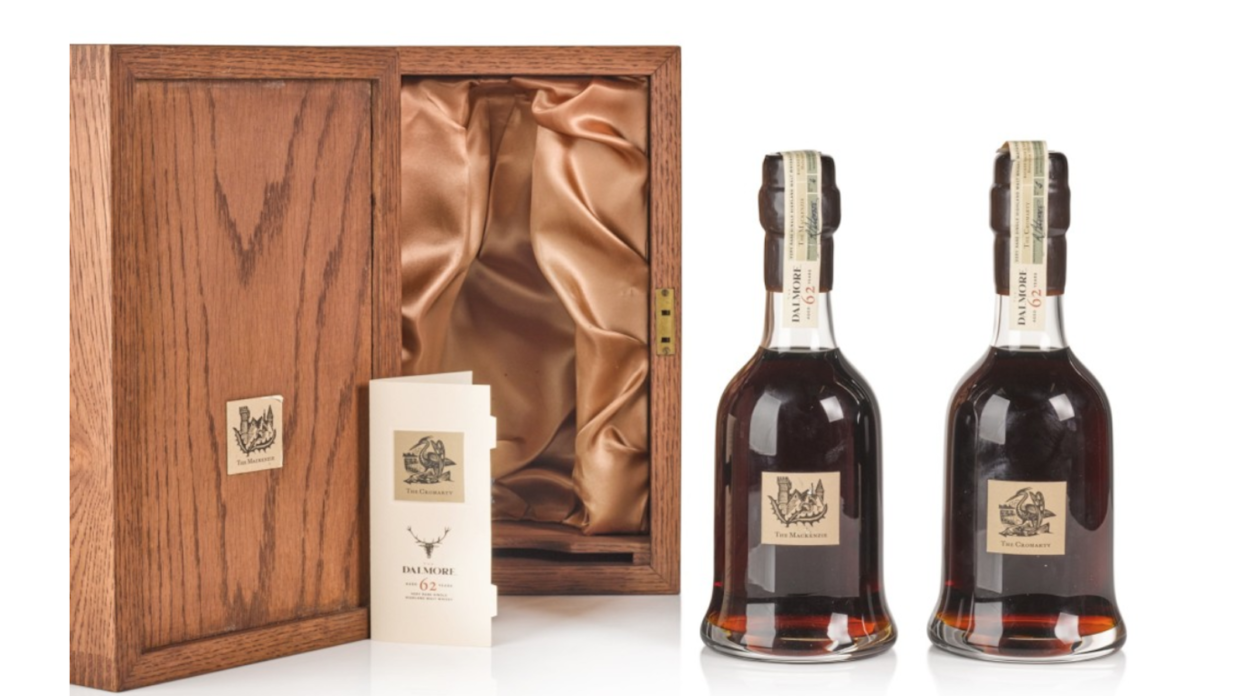 Sotheby's, London is offering Dalmore 62 year old The Cromarty and its sibling, The Mackenzie, in a rare sale of this scotch that includes whiskies from the 19th century.

Sotheby’s, London is currently holding its Distilled spirits and whisky auction until May 28, with sales taking place exclusively online due to social distancing. The offerings in this sale include some eye-popping rarities, including two bottles of Dalmore 62 year old previously unseen at auction, estimated at $92,000–$122,000 each. Richard Paterson, master blender for Dalmore, created a total of 12 unique bottlings of this 62 year old, though at least one has been consumed, making these two lots all the rarer. They’re siblings to a bottle that, between December 2002 and September 2007, held the record for the most expensive bottle of whisky sold at auction (see below): the only time Dalmore has realized this achievement.

Each bottling was given a unique name to reflect a key part of Dalmore and its history; the Distilled sale presents bottle No. 2, The Mackenzie, and bottle No. 5, The Cromarty (not to be confused with Dalmore Cromartie–Lands of Mackenzie, a limited-edition release which was distilled in 1996). Dalmore Distillery overlooks the Cromarty Firth in an area of the Scottish Highlands strongly associated with Clan Mackenzie, and Mackenzies had a long association with Dalmore during the 19th and 20th centuries.

The liquid originated from reserves laid down in 1868, 1876, 1926, and 1939, which had been vatted together by previous distillery managers. Paterson took this precious stock and racked it into a González Byass oloroso sherry cask to mature further, before a final finishing period in a small, bespoke cask sequentially seasoned first with aged Dalmore whisky, then with 30 year old González Byass Matusalem oloroso sherry. Until this month, there have only been two opportunities since 2002 to bid on a Dalmore 62 year old, so the appearance of two bottles in the same auction represents an unprecedented opportunity for collectors.

Besides the two rare Dalmores, there are over 200 other spirits lots in the Distilled auction, which Sotheby’s anticipates could net $1.35 million total. Sotheby’s, London currently holds the record for the most expensive bottle of whisky ever sold at auction, a 1926 Macallan Fine & Rare 60 year old that went for about $1.8 million last year. While there may not be any million-dollar Macallan in this sale, Sotheby’s is offering a bottle of 1928 Macallan 50 year old (est. $86,000–$122,000) and a vertical of 1937–1974 Macallan Fine & Rare miniatures (est. $104,000–$147,000). The sale also includes a cask of 1992 Springbank Organic (est. $49,000–$63,000), dozens of independent bottlings— including gems from Samaroli and rarities from Gordon & MacPhail—and the world’s oldest cognac: the largest of three surviving bottles of 1762 Gautier Cognac (est. $98,000–$196,000). What new records, if any, will be achieved remain to be seen, although there are encouraging signs that auction prices have been rising since lockdown.