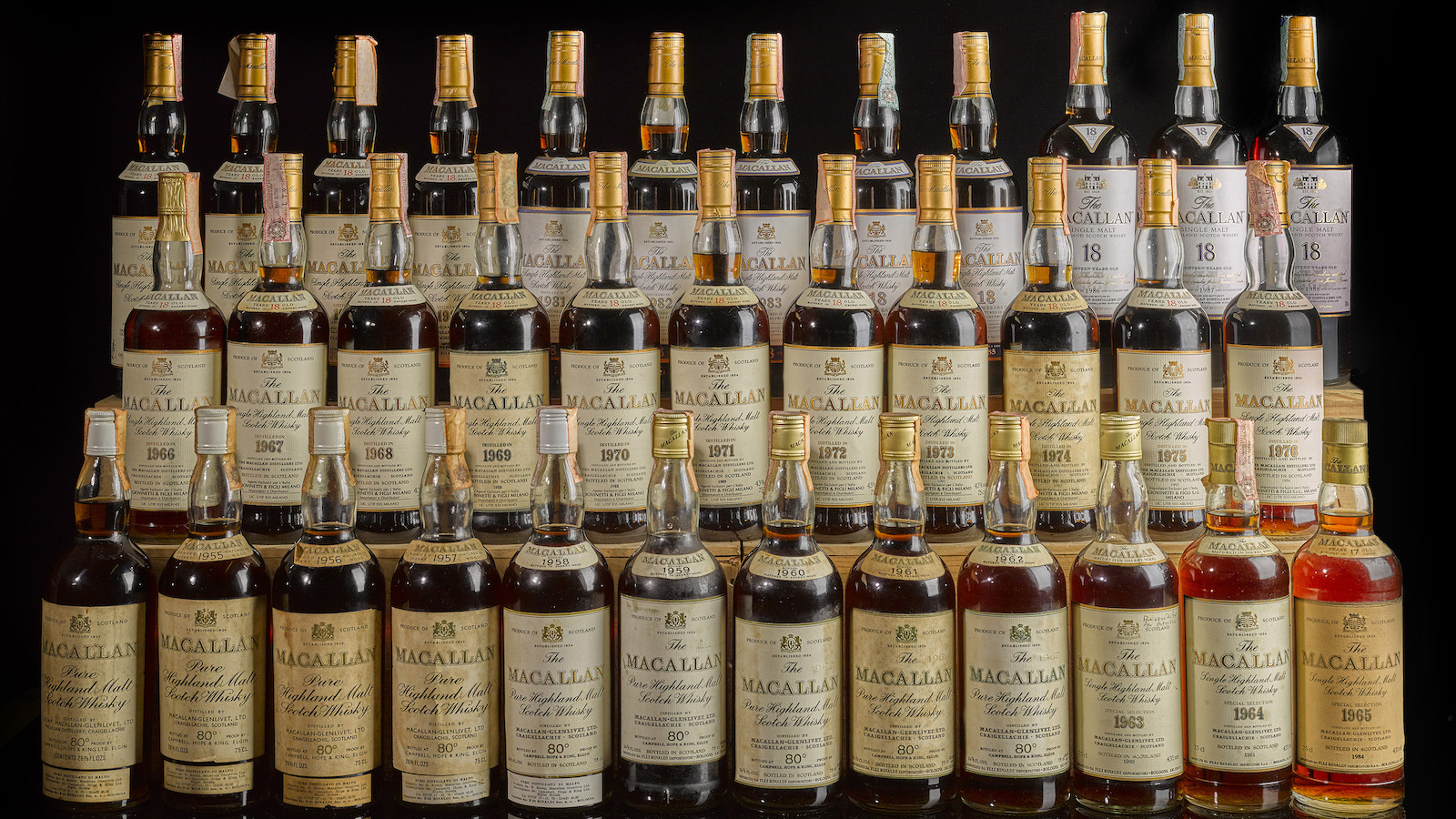 Sotheby's will auction what it has dubbed "The Ultimate Whisky Collection" on Oct. 24. Seventy percent of the collection is comprised of Macallan bottlings.

It’s sure to be the whisky auction of the year. On Oct. 24, Sotheby’s will auction off one of the world’s most valuable whisky collections. Amassed by an anonymous single American owner, the $5 million asset has been dubbed “The Ultimate Whisky Collection” by Jonny Fowle, Sotheby’s spirits specialist. The landmark sale underscores Sotheby’s new commitment to spirit auctions and promises to be a showcase for scotch not seen at live auction since the 2009 Bonhams series that encompassed the 3,000-bottle Willard S. Folsom Collection and spanned multiple countries. It’s easy to run out of superlatives for eye-popping whisky auctions, but I have genuinely never been more excited about a sale.

Sotheby’s has a strong history of bringing the finest Macallan to auction, but the magnitude of vintages in this sale is unparalleled. Macallan makes up 70% of the sale, with Sotheby’s cataloguing an unprecedented 178 bottles of The Macallan Fine & Rare series, covering vintages from 1937 to 1991; a further 104 Fine & Rare miniatures; and two complete sets of The Macallan in Lalique Six Pillars in their bespoke cabinets. The 1926 Macallan Fine & Rare 60 year old is the star bottle (Est. $425,000–$545,000), and originates from the same cask as the bottles that broke $1 million in Hong Kong and London in 2018. I suspect the Fine & Rare label—with its somewhat less unique branding and packaging—may keep it from breaking the records set by the artistic designs created by Peter Blake, Valerio Adami, and Michael Dillon.

Beyond Speyside, the collection includes rare Islay whiskies, including every bottling of Black Bowmore, from the original trio released in the mid-1990s to Black Bowmore 42 year old (and its siblings, White 43 year old and Gold 44 year old) to Black Bowmore 50 year old (Est. $39,000–$46,000). Having witnessed the 1957 Bowmore 54 year old famously fail to sell in New York in 2012 for the second time in a month, I’ll be eagerly watching to see if Sotheby’s can attract the estimated $102,000–$133,000 price for this bottle. There’s also every Port Ellen vintage from the Diageo Special Releases and the rare 1965 Ardbeg (Est $9,700–$12,000), which has achieved impressive prices this year.

The owner of the collection wishes to remain anonymous, but gave a quote through Sotheby’s, “Though I have always loved drinking whisky…I first began collecting wine. I then found myself looking at unique bottles of Scotch, initially attracted by the beauty of the labels. So I started this collection and realized that if I really spent time on it and was selective in my choices, I might be able to put together something significant and unique.”

While individual bottles from this collection appear at auctions throughout the year, what makes this sale particularly noteworthy is seeing such a concentration of remarkable whiskies from a single collector. Even if the price of these rarities goes beyond the budgets of all but the wealthiest whisky drinkers, as a spectacle, this will still be an auction that will live long in memory.

Sotheby’s will run online bidding ahead of a live auction on Oct. 24 in London.