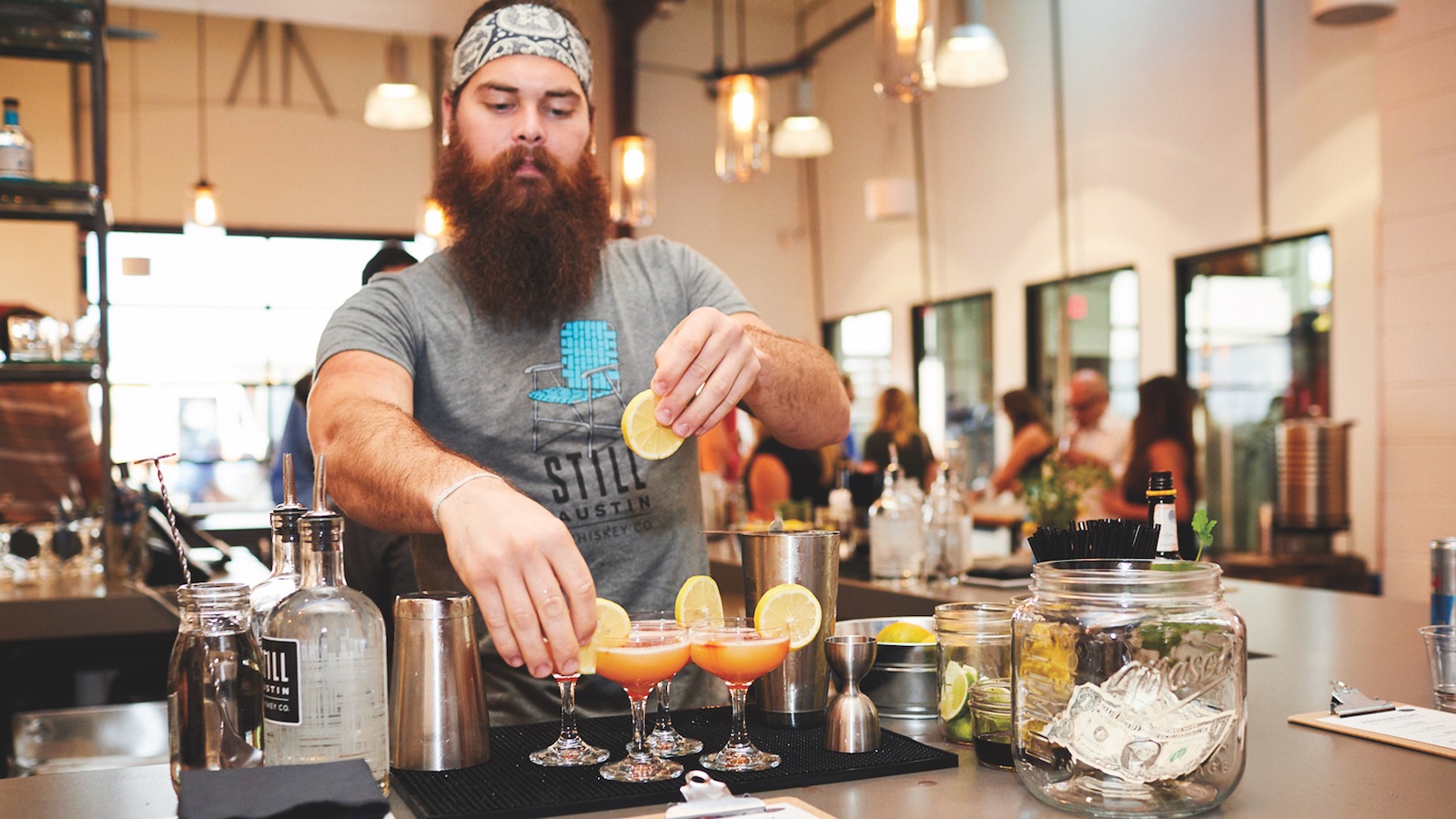 Over the past decade, Austin, Texas has transformed from sleepy slackerville to one of the fastest-growing cities in North America. With the help of some big-name tech companies and the increasing popularity of the annual South by Southwest festival held each March, Austin has blossomed into a bustling metropolis of nearly one million. Although some stalwarts still cling to the city’s self-appointed moniker of “Live Music Capital of the World,” Austin has taken on new bragging rights, namely for its impressive (and seemingly ubiquitous) craft spirits scene, with whiskey at the forefront.

Everything’s bigger in Texas, except public transportation, so you’ll need to rent a vehicle or rely on ridesharing apps to get around. Although lodging options are virtually endless, a stay at the mid-century modern Hotel Van Zandt will provide a great central jumping-off point. Once you’ve dropped your bags, you’re free to explore the city’s many boozy treasures.

No place better embodies Austin’s artisan spirits community than Still Austin Whiskey Co., the city’s first distillery in nearly a century. The young distillery is located in The Yard, home to an array of small businesses that manufacture their goods and sell them on-site. Before heading to Still, pick up a coffee at Spokesman and ask the barista about their roasting process.

Now that you’re caffeinated, walk toward Still for a tour of one of the largest grain-to-glass operations in Texas. Currently the distillery offers new make spirits, but that’s just while their barrels—some containing whiskey made from heirloom strains of grain—age. After the tour, order a refreshing hibiscus-infused Whiskey Mule in Still’s sleek tasting room. For lunch, pop into neighboring St. Elmo Brewing Company for a light Helles-style lager and a roti taco with shrimp chips and queso from the much-acclaimed Pan-Asian food truck Soursop.

While your first tastes of Austin are still fresh in your mind (and on your breath, hello, shrimp chips!), take a quick trip to The Austin Shaker. This local craft liquor store is stocked with appealing collections of local whiskeys, as well as traditional single malts, Japanese offerings, and hard-to-find niche accompaniments.

Afterward, venture downtown to Easy Tiger, a bakery and Munich-style beer garden along Waller Creek. The Texas Hill Country dish will give you a good cross-section of local and house-made offerings, especially when paired with a whiskey (served over ice) from Garrison Brothers in nearby Hye. It may be tempting to indulge in items from the beautiful open floor-plan bakery upstairs, but you’ll want to save room for dinner. 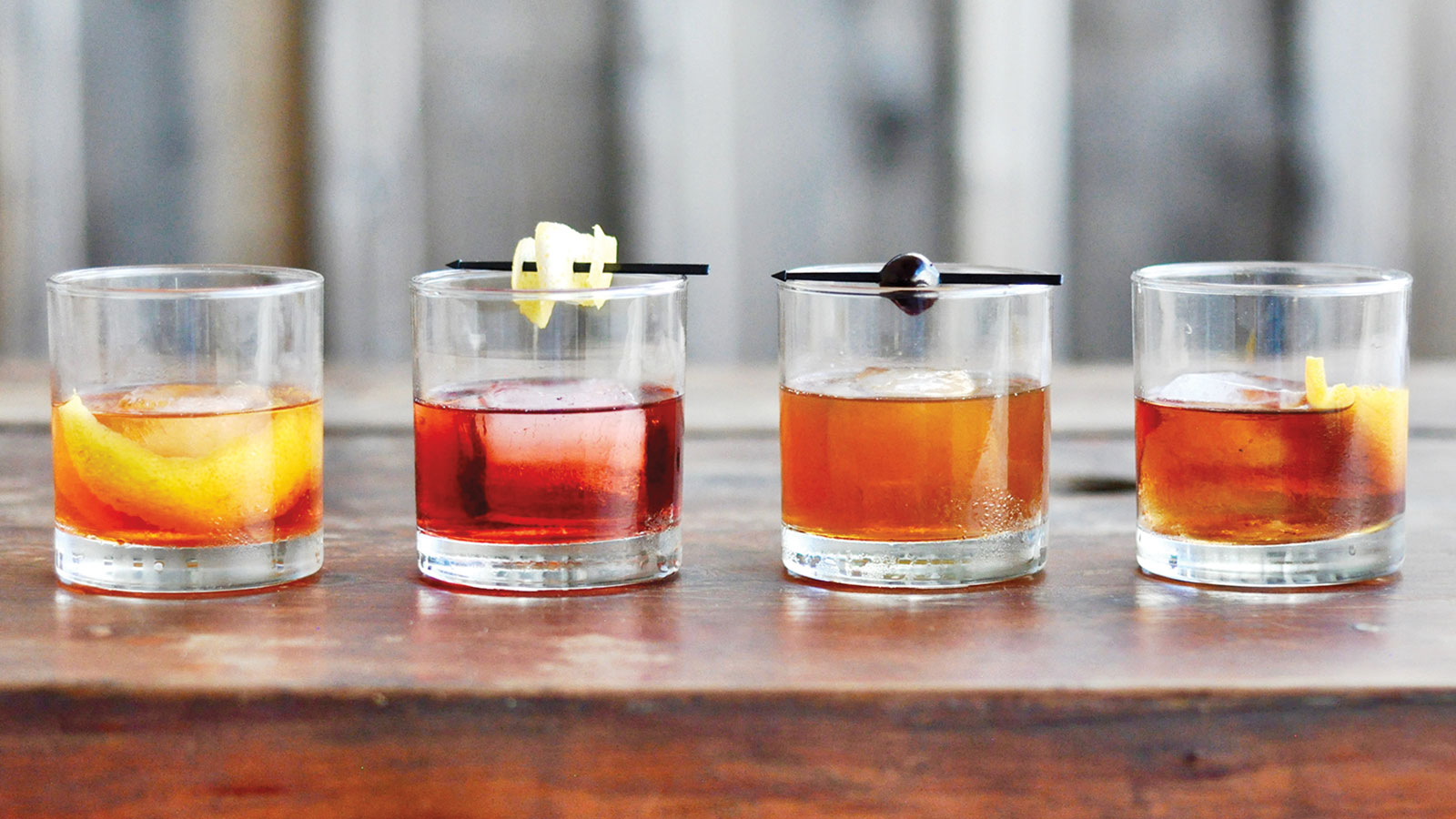 Freedman’s offers 160 whiskies to pair with their barbecue.

Speaking of which, stroll west from Easy Tiger along Sixth Street toward the Warehouse District, stopping for a moment at the intersection with Brazos Street to take in the landmark architecture of The Driskill Hotel. Cut over to Seventh Street, continuing west toward Congress Avenue, and absorb artist Jim Hodges’ permanent installation With Liberty and Justice for All (A Work in Progress) on public display atop The Contemporary Austin art museum. Follow the busy tree-lined avenue south to Fourth Street, where you’ll find Péché, Austin’s first absinthe bar, hidden among the limestone buildings.

Chef John Lichtenberger is a master of French cuisine—especially comfort food—and has crafted a decadent menu replete with fresh takes on a slew of culinary classics, as well as a superior selection of whisky and absinthe cocktails. Start with an off-the-menu bourbon drink called Tied For Third and pair it with the perfectly acidic steak tartare appetizer. As entrees go, it doesn’t get much better than the braised short ribs, a perfect flavor complement to the foamy, lightly sweet signature Fig Manhattan.

For a nightcap, return to the Hotel Van Zandt’s American fusion cocktail bar, Geraldine’s. Try the Green Point, made with local Kooper Family Rye, before calling it a day.

Grab a quick coffee at Houndstooth Coffee’s Congress Avenue location en route to an energizing swim at Barton Springs Pool, a three-acre spring-fed outdoor pool in downtown Austin. After brunch, take the 30-minute trek west to Treaty Oak Distilling, a 30-acre operation that produces bourbon, vodka, gin, rum, and beer. Between the sprawling Treaty Oak ranch and neighboring independent crafters, you could spend an entire day exploring the area. To hit the high points, start with a distillery tour and tasting at Treaty Oak, then head down the road to the farmhouse-chic Jester King Brewery for a seasonal flight from its elaborate tasting room menu.

(Lunch) time is now of the essence, so hightail it back to Austin and over to Freedmen’s for barbecue and an assortment of more than 160 whiskies. This saloon-style bar sits inside the historic Franzetti Store building, built in 1869 and once inhabited by Rev. Jacob Fontaine, a former slave who founded one of America’s first black newspapers. Order the mammoth barbecue sammy and pair it with a build-your-own flight of three whiskies or a cocktail featuring Freedmen’s whiskey of the month.

While you’re centrally located, check out happy hour at Drink.Well., a neighborhood craft cocktail bar and gastropub in the North Loop area. The ambient exposed brick and wood interior creates the perfect atmosphere to explore the nearly 75 whiskies and an inventive, ever-changing drinks menu.

For dinner, treat yourself to a reservation at the fine southern dining restaurant Olamaie, whose prim antebellum exterior, dimly lit parlor room bar, and butler-like service call to a simpler, slower time. Keep an eye on the daily punch offerings, specifically the Bottled in Bond Bourbon Pecan Milk, that tastes like melted ice cream. 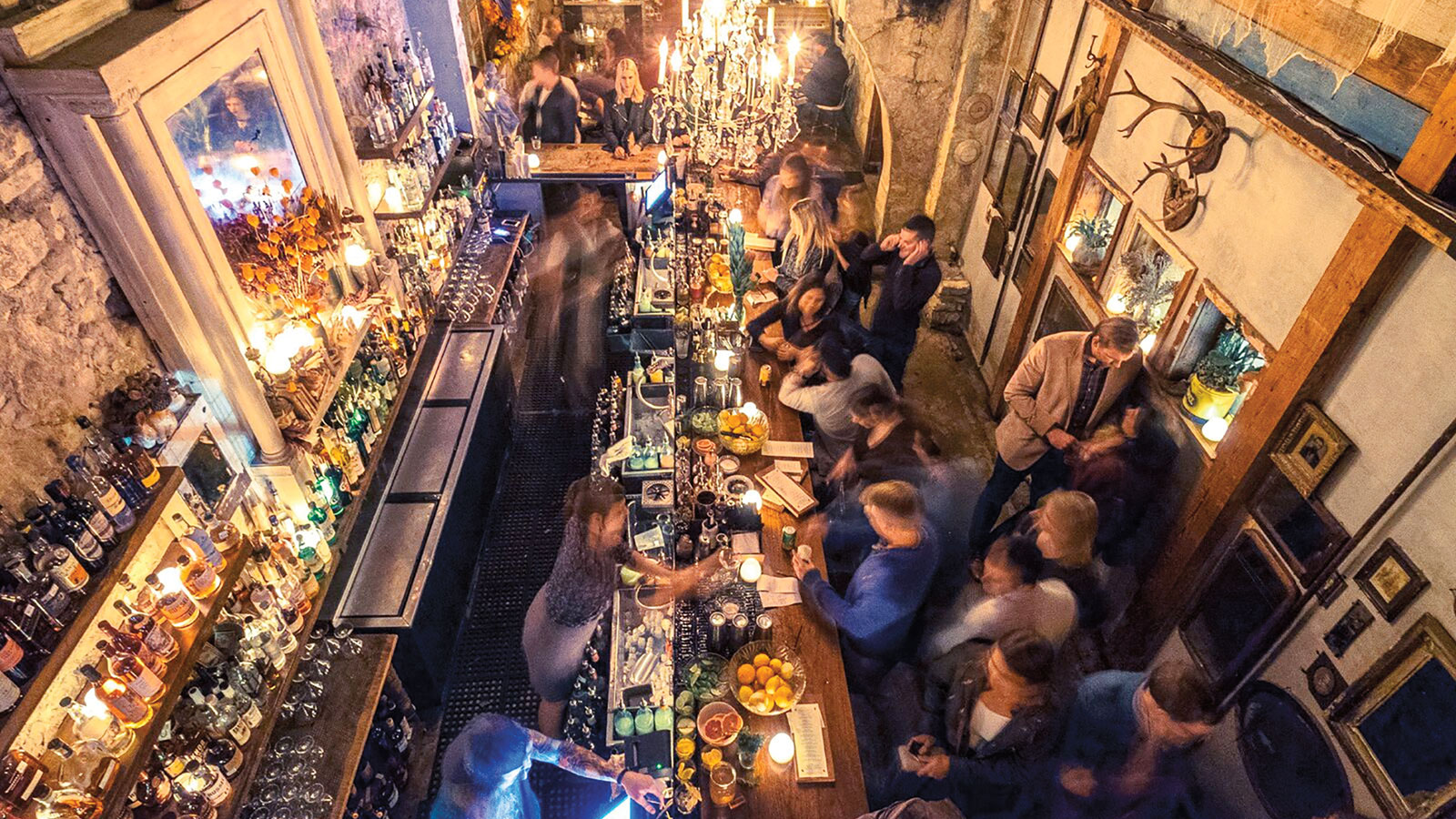 Speaking of which, save room for Prohibition Creamery, a boozy ice cream parlor and cocktail bar in the heart of Austin’s thriving Eastside. The imaginative Deconstructed Old-Fashioned sundae is unlike anything you’ve ever tasted, as is the substantial Triple Bourbon milkshake; both include house-made bourbon ice cream and bourbon whipped cream.

At this point, you’ll likely need a digestif and some exercise, so take a brisk 20-minute walk to The Blackheart whisky bar, a restored private residence built in 1889, offering live music and more than 150 whiskies, including rarities and local gems. Opportunities for cocktail detours abound along the way—like the rye whiskey-forward Whisler’s.

Feeling primed for a late night, you can head to The White Horse, a honky tonk where cowboy hats abound and the whiskey on tap flows freely until 2 a.m. With live music and free Saturday night dance lessons, it’s the ideal place to work on your Texas Two Step before you scoot your boots on home.