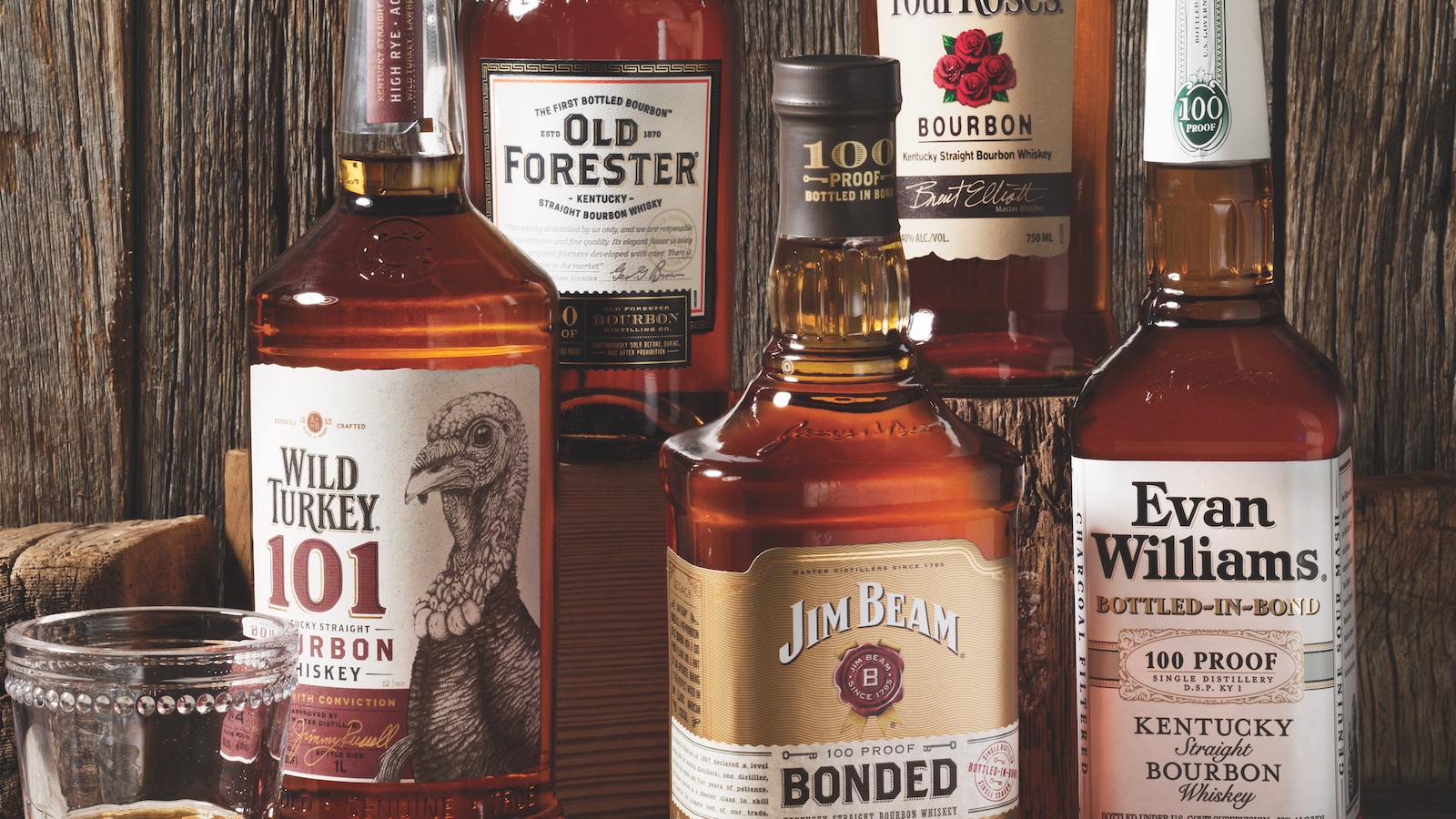 Want to buy a $20 single malt scotch? Good luck. Desire a quality $30 Cognac? Yeah, right. Even vodka, which can be made in an instant, places its premium products north of $30. Fortunately, we do not need to settle for cheap beer or two-dollar jug wine. Hope awaits us penny-pinching spirits lovers: sitting in new charred oak barrels, resting in Kentucky rickhouses are copious amounts of delicious bourbon that will be bottled in the $9 to $30 range, delivering plenty of satisfying flavor, while still leaving some coin in our pockets.

The recent interest in bourbon has priced once-hidden gems like Elijah Craig 18 year old out of the everyday drinking conversation for many of us. Lavish media attention made others, like Pappy Van Winkle, nearly impossible to find, but the bourbon standbys that so often go unappreciated are waiting on the shelves to offer solace.

The Best Bourbons for $20 or Less

Just ask Ernie Smith, a western Massachusetts resident who’s been drinking bourbon so long his everyday sipper was once 10 year old Old Rip Van Winkle. Smith now contents himself with the subtlety and delicious value of Buffalo Trace, Maker’s Mark, and Old Grand-Dad Bonded, “Because they’re outstanding value. You don’t have many brands under $30 these days, but what’s out there is really good.” In fact, it should be celebrated.

The very definition of bourbon, a spirit distilled from a minimum of 51% corn, is the first secret to its relative affordability. Kentucky bourbon begins in cornfields, usually located within 100 miles of the distilleries where it is transformed into whiskey. The raw material is affordable and convenient. Distillers compete primarily against food manufacturers to acquire the best food-grade dent corn. Heaven Hill master distiller Denny Potter* says they have paid a premium to ensure the best grain becomes bourbon rather than tortilla chips, livestock feed, or ethanol.

For a global commodity, the price of corn has remained relatively stable over the past decade, hovering around $4 to $6 per bushel. Many say the stability of corn pricing benefits from substantial agricultural subsidies from the federal government, but Indiana corn grower John Kolkmeier, owner of Kolkmeier Brothers Feed & Grain Inc., says drought-free seasons and better seeds do more to keep the price of corn low than taxpayer money does.

Jim Rutledge, former Four Roses master distiller and now a distilling consultant, agrees. Rutledge has spent much of his career monitoring corn prices and has determined corn is a big reason why bourbon remains so inexpensive. “Let’s say a distiller bottles a 6 year old bourbon at 90 proof [on average]; the cost of corn…is approximately $0.19 per bottle,” Rutledge says.

The Best Bourbons for $30 or Less

Of course, bourbon is much more than just corn. While it typically comprises 51% to 80% of the grain, the rest will come from rye, wheat, and barley. These grains are more costly, says Tripp Stimson, longtime distillery consultant and master distiller for Barrell Bourbon. Rye ranges from $14 to $17 per bushel, partly because the majority originates from Europe and Canada, according to Stimson.

But the cost of grain pales in comparison to the main cog in the bourbon wheel—new charred oak barrels. “Barrels are probably the one raw material that impacts price more than anything,” Potter says. “When there is a shortage, that can impact the pricing. There’s no doubt about it, barrel pricing’s probably gone up 40 percent in the last seven years.”

In fact, it’s the organic and capricious nature of each barrel that often determines where a bourbon will emerge in terms of quality—and also price. “When it goes into the barrel, we don’t know if that bourbon…is going to be Evan Williams Black, Evan Williams Single Barrel, Elijah Craig, Henry McKenna, or something else,” Potter says. “Every single product gets the same care and passion to produce.”

In other words, there are real similarities and kinships between the coveted Elijah Craig 18 year old and the everyday Evan Williams Black Label. They begin life the same, and each barrel’s quality, location in the warehouse, development, and ultimately age determine the final destination of its contents.

Distillers and maturation specialists regularly draw barrel samples from the warehouses to guide each barrel to its final destiny.

I think bourbon will always have the edge, because once you develop that taste, you just can’t get that kind of value elsewhere. —Fred Noe, Jim Beam

There are far more very good barrels than great ones, of course. The careful curation required to cull barrels for top-shelf whiskey results in smaller batches. So, in this scenario, Elijah Craig 18 year old comprises but a single barrel, while Evan Williams Black Label is a batch of around 2,000 barrels that didn’t make the small batch cut, but are still tasty. This is an area where distillers benefit from the economy of scale. “The major producers have inventory to play with we simply do not,” says Joe Beatrice, founder of Barrell Bourbon.

These big distillers also saw the current demand building well in advance, and increased production so they could continue to fill the value shelf. “When the market started to take off in 2010, many distillers jumped on the bandwagon and started producing more,” says David Ozgo, chief economist for the Distilled Spirits Council, an industry lobbying and research group. “You expand capacity, you’re able to produce more, so it’s really a matter of the market from the supply side keeping up with the demand side.”

Ozgo believes bourbon’s historically low input costs will help maintain the coveted value brands, despite escalating prices for Four Roses Limited Edition, Buffalo Trace Antique Collection, and other rare gems. “By definition, [these are] a specialty item and there’s a scarcity element to it,” he says.

Potter says bourbon will continue to offer inexpensive options for enthusiasts, acknowledging the sheer volume in Kentucky warehouses. “Because we’re the…second largest holder of bourbon in the world, behind Beam, and because we can run these primary mashbills and put all the care in up front, that gives us a lot of flexibility on the back end to manage some of these brands,” he says.

Even as bourbon prices have slowly crept up, it has remained challenging for scotch to compete purely on a price basis. There’s simply no way scotch will eclipse bourbon in value, says Fred Noe, master distiller for Jim Beam. “Our fixed prices in corn and less labor really help us,” Noe says. “It takes a lot of work to harvest the peat, dry and cure the barley—that’s gotta be expensive. I think bourbon will always have the edge, because once you develop that taste, you just can’t get that kind of value elsewhere.”

Ozgo notes that bourbon has a decided advantage in maturation too. While federal regulation requires expensive new charred oak barrels, after these barrels are used they are sold to producers of scotch, other whisky, and even tequila and rum producers, helping to defray their cost. Bourbon also achieves flavor maturity much faster than scotch. “Scotch tends to be aged a little bit longer [because of] the climate. [Whiskey] ages more quickly in Kentucky because of more extremes in temperature,” says Ozgo.

So while bourbon can claim the value award with little argument, the choice of scotch or bourbon is equally a matter of occasion and taste for some whisky drinkers. Ernie Smith’s a bourbon man through and through, so he’s thankful distillers continue to make affordable bourbon a priority. “Even with all the changes in demand, you still can’t beat bourbon’s overall value,” Smith says.

No you can’t. And it’s nice to know there’s still plenty of tasty bourbon within reach for us common folk.