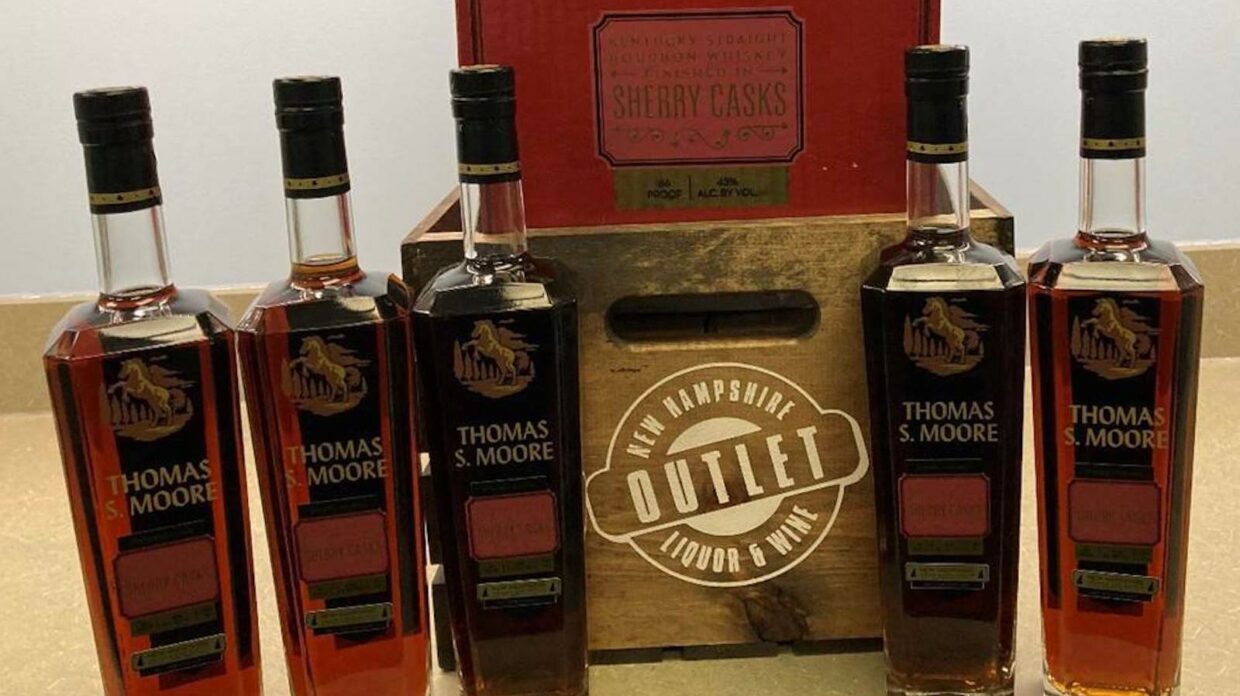 The new, New Hampshire-exclusive Thomas S. Moore bourbons are the first collaboration in a series that will mark the NHLC's anniversary each year.

Barton 1792 fans are getting a treat in New Hampshire, where the distillery has partnered with the Granite State’s liquor authority to release five Thomas S. Moore single barrel bourbons. The new expressions, which are all sherry cask-finished and bottled at 86 proof, are available only at a few chosen New Hampshire Liquor & Wine Outlet locations.

While finished bourbons are often put into casks for a relatively short period, these whiskeys spent at least four years in sherry butts. That has taken them to another level, according to Barton 1792 master distiller Danny Kahn. “If we put our bourbon into a sherry barrel for two to five months, all we’d get is the sherry that was extracted [from] the wood, which will infuse into the bourbon and give some sherry notes,” he says. “By extending the cask finish—and there are four or more years in these—you not only get flavors of the sherry, but also of how the sherry barrels were treated.”

All the bourbon used in these extended cask finishes was initially aged between 5 and 6 years, Kahn notes. “My belief is that 5 year old bourbon is the best for this process,” he adds. “Once you get older, you get more oaky, smoky, aged notes and less grain and fermentation. That can take away from the cask finish.”

The new expressions are identified by barrel number (Nos. 1 through 5) and are available in very limited quantities. The choice of 86 proof is a quirky nod to the 86th anniversary of the New Hampshire State Liquor Commission (NHLC). At least four additional Thomas S. Moore-NHLC collaborations are in the works, and their proof will also match the NHLC anniversary year.

At $70 each, these single barrel whiskeys are likely to go fast. Customers are also invited to taste the new bourbons with Barton 1792 master distiller Danny Kahn during an interactive virtual tasting on April 28, at 6:00pm EST. RSVP to the event at www.liquorandwineoutlets.com. If you can’t get your hands on these, the upcoming Thomas S. Moore collaborations will include an 87 proof merlot cask finish coming this fall, an 88 proof pinot noir cask finish following in 2022, an 89 proof cabernet sauvignon cask finish slated for 2023, and a 90 proof port cask finish in 2024.