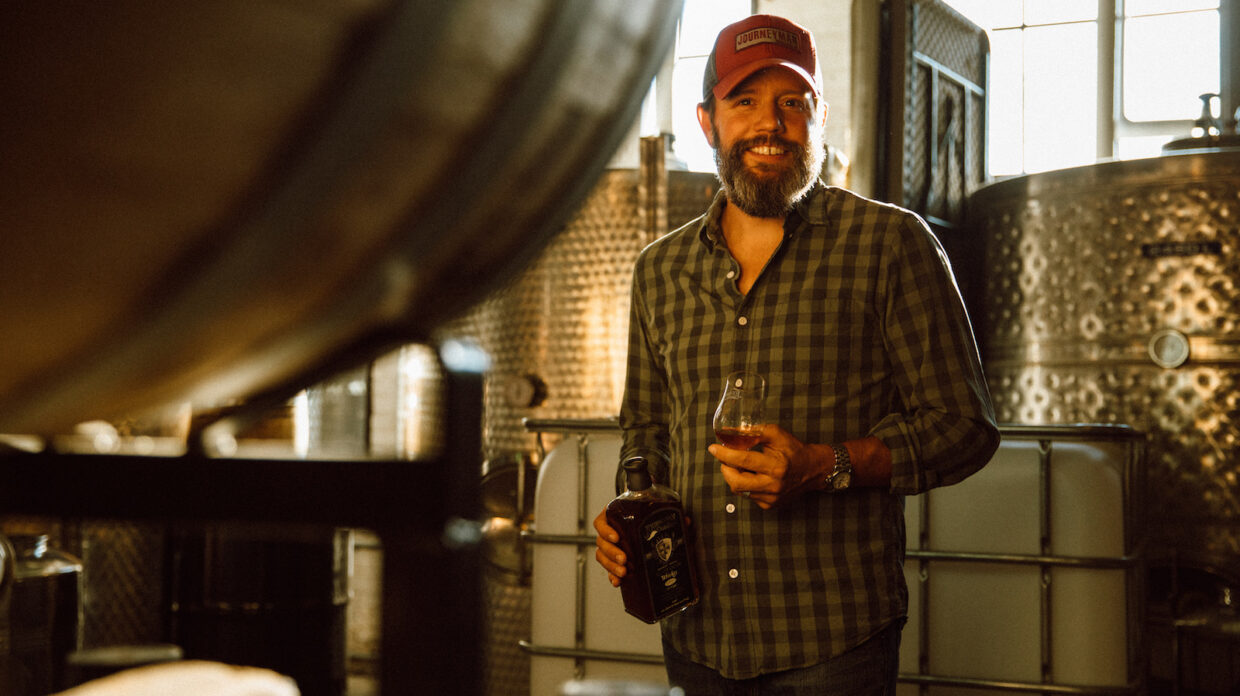 Journeyman Distillery owner and head distiller Bill Welter makes a conscious effort to create a bourbon that's different than those produced in Kentucky.

Kentucky bourbon is prized for its bold flavors and authenticity. Like an old-school steakhouse, it harnesses tradition and authority to deliver a rarified experience, a process and product that have been perfected over time. But whiskey drinkers, like gourmands, have ever-expanding palates, and as much as the old ways work, and work well, there is no denying the excitement of new ideas and perspectives on something as universally beloved as bourbon.

“Kentucky bourbon is a unique product unto its own. And frankly, it’s a very good one,” says Bill Welter, owner and head distiller at Journeyman Distillery in Michigan. As for Journeyman’s Featherbone bourbon, which uses an all-organic mashbill of 70% corn, 25 % wheat, and 5% rye, Welter states, “We weren’t really setting out to try and replicate something that was already being done very well.”

Welter and Journeyman are among a crop of new distillers reimagining what great bourbon can taste like; stepping out of Kentucky’s long shadow to embrace differences in terroir, experiment freely, and examine every step of the whiskey-making process. The result is a group of bourbons that isn’t bound by tradition and expectation, but instead challenges convention and builds upon the style’s longstanding reputation.

“We’ve been in business now for 11 years, and I think it’s been shown that there is a significant market of people who may very well like Kentucky bourbon, but they’re oftentimes looking for something that is different and unique.” Welter says. “And, certainly, I think we’ve appealed to that crowd.”

Kentucky may be where the choicest, center-cut bourbons will always hail from, but there’s enough room on the block for updated takes on a classic—with these whiskey makers and others leading the way. 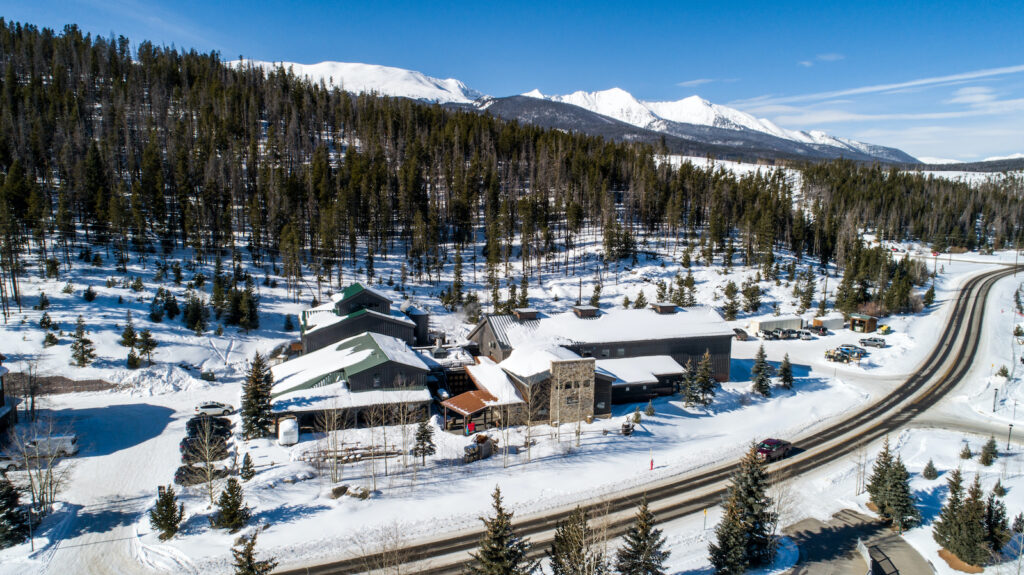 Breckenridge Distillery in Colorado is the highest distillery in the country at 9,600 feet above sea level, enabling it to indulge in extreme aging techniques. (Photo by Alex Neuschaefer)

A Change in Temperature

Bourbon must be made in the U.S., from at least 51% corn, and aged in new charred oak containers, among other requirements. It is a misconception that bourbon can only be made in Kentucky, perhaps fueled by traditional notions and that the lion’s share of bourbon comes from the state. It is valuable, however, to examine why Kentucky became the epicenter for bourbon in order to appreciate how other distillers are making conscious efforts to be different.

Geography certainly matters, as Kentucky’s hot summers and cold winters promote barrel interaction. There is also the ease with which corn grows in the state, and the many waterways surrounding it, which made it easy to distribute whiskey to neighboring states. Then there is the state’s access to limestone water for imparting a cleaner profile.

These conditions have produced bourbons loved by millions, but distillers outside Kentucky are witnessing firsthand how their own state’s climate impacts America’s spirit. When David DeFazio launched Wyoming Whiskey in 2006, there was, as he puts it, “no craft spirits playbook.” So they modeled their distillery after those in Kentucky, enlisting former Maker’s Mark distiller Steve Nally.

“What we wanted to do was build on what Kentucky has been doing for generations, but we wanted to do it in a different place, and ended up doing it in the middle of nowhere,” DeFazio says. That presented unforeseen challenges, like securing an acceptable water source, distilling at a higher elevation, and understanding the different grain-growing seasons. A lover of wheated bourbons, DeFazio knew he wanted to follow a certain blueprint, but a change in state inevitably resulted in a change in flavor. 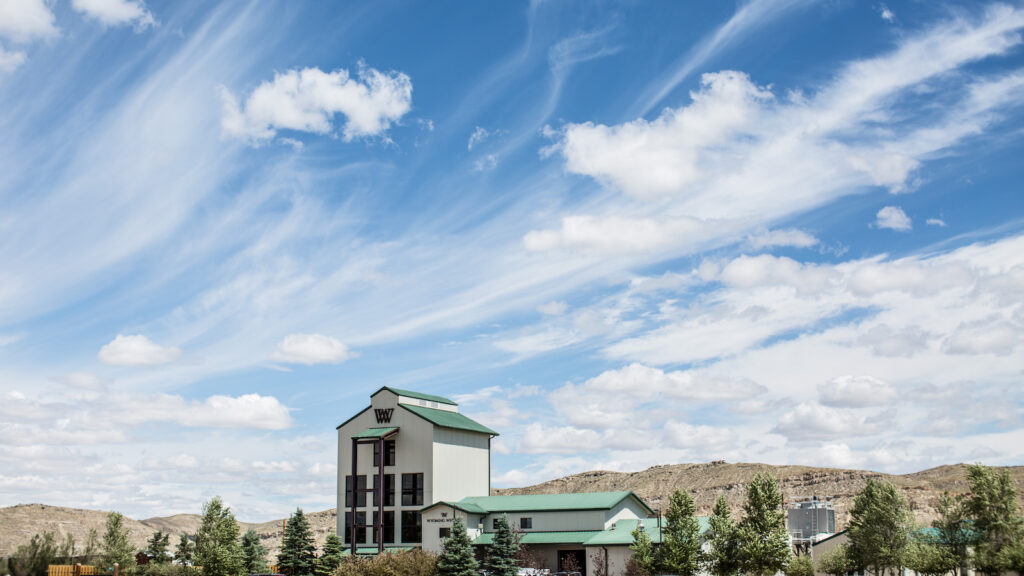 While Wyoming Whiskey’s distillery is modeled after those in Kentucky, it’s producing an entirely different bourbon, largely due to its colder climate.

“A big difference from Kentucky is that we’ve got real winter here, and our warehouses get really cold. As soon as these barrels drop below 40 degrees, they go into hibernation, and they take on all sorts of weird flavors and notes,” he says. Wyoming produces a small batch and a double cask bourbon, both of which use a 68% corn, 20% winter wheat, and 12% malted barley mashbill. “What we are is distinctly Wyoming. It’s definitely not from anywhere else. And that’s, in my opinion, a direct result of environmental factors that these barrels are faced with every year.”

Breckenridge Distillery in Colorado takes extreme aging even further, as the highest distillery in the country at 9,600 feet above sea level. While Breckenridge began by sourcing and blending whiskey, founder and CEO Bryan Nolt credits the aging conditions for imparting a signature flavor.

“It definitely has an effect on the whiskey,” he says. “We found that flavors seem to concentrate because of the way pressure fronts move through here; you get a lot more interaction with the wood. So I think the two-mile high-ish aging environment, it makes quite a big difference in what we end up with.” 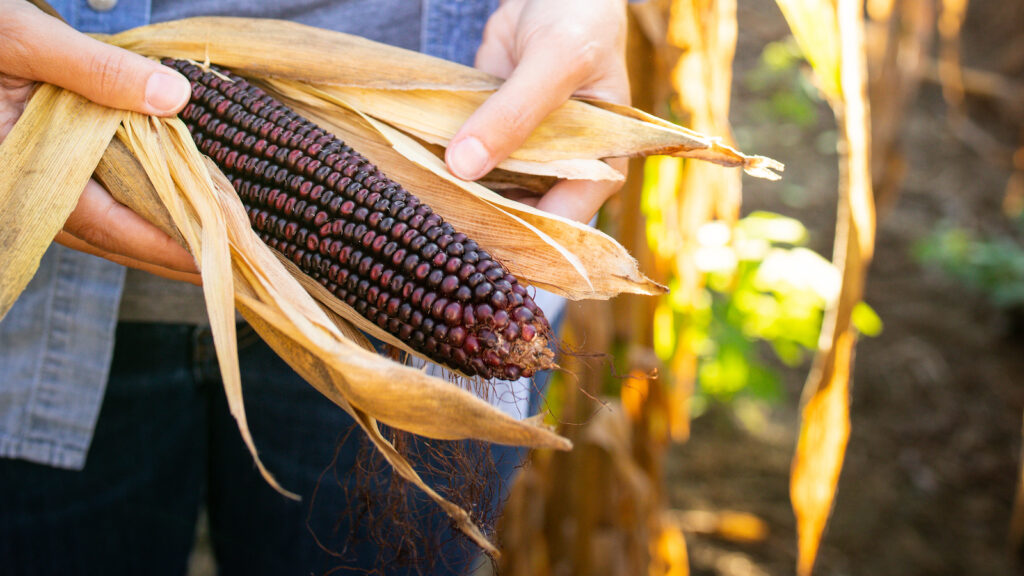 High Wire’s bourbon is made from 100% Jimmy Red corn, with no flavoring grains in the mashbill. (Photo by BONAFIDE)

While bourbon’s primary grain is always corn, there is often great emphasis placed on the secondary or flavoring grains—typically rye or wheat—adding spice or sweetness to the flavor profile. That seemed strange to Scott Blackwell, owner of High Wire Distilling in South Carolina. A former bakery owner, Blackwell approached bourbon-making by looking at the ingredients first, and making a concerted effort to differentiate himself from distillers in Kentucky. That led him to Jimmy Red corn, a varietal native to the Carolinas.

“We were curious about the flavor, so the first mashbill we made was 100% corn. We didn’t want it to be adulterated by wheat or rye,” Blackwell says. “We distilled that corn and noticed that it had all these other things going on in it that yellow and white didn’t have.”

High Wire bottled that 100% corn bourbon, and it routinely surprises experienced whiskey drinkers who taste it and ask about the secondary grains. Blackwell says they experimented with rye and wheat but ultimately preferred the complexity that the all-corn mashbill gave them. “Jimmy Red is going to be the house identity,” he says. “We’ve gotten better at making it over the years and our growing practices have gotten better.” 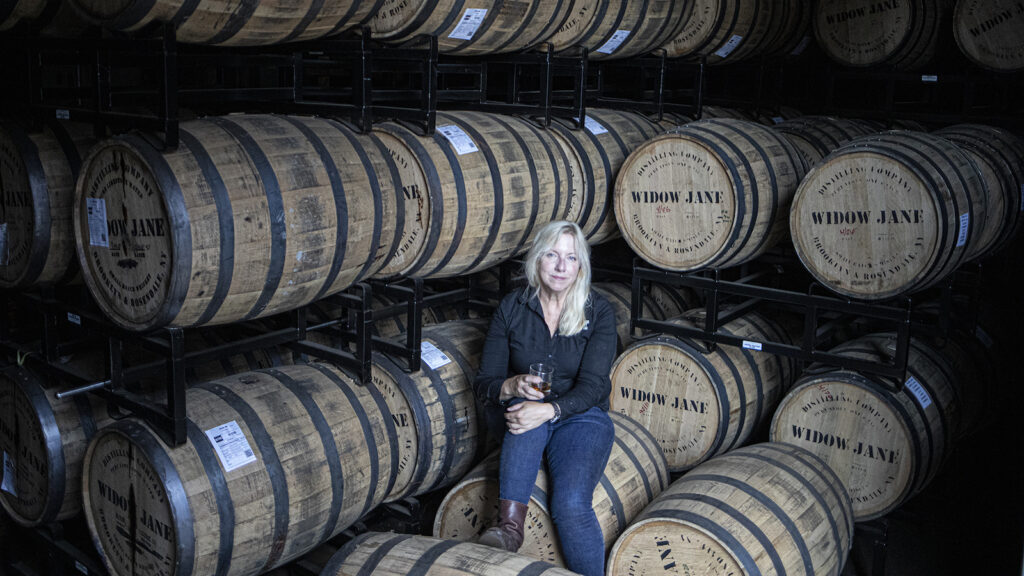 Widow Jane in Brooklyn, New York is taking a similar approach, developing a hybrid corn varietal that crosses Bloody Butcher with Wapsie Valley for its Baby Jane bourbon, which uses a mashbill of 80% corn, 10% rye, and 10% malted barley.

“We’re always talking about supporting grains because those are the flavor grains, but with heirloom corn, that corn itself is actually the flavor grain,” says Lisa Roper Wicker, head distiller at Widow Jane. She equates using heirloom corn to purchasing tomatoes at a farmers market, saying that while the grocery store has its place, we all prize carefully grown produce. “They’re a little more fragile, they’re too irregular in shape, but they taste incredible and they all have their own flavor profile, and corn’s the same way.”

While Widow Jane also sources and blends more mature whiskeys, the heirloom corn gives them a unique approach to their house style. “We’re selling it at a year old only,” Roper Wicker says, “so people can get their heads around what we’re doing.” 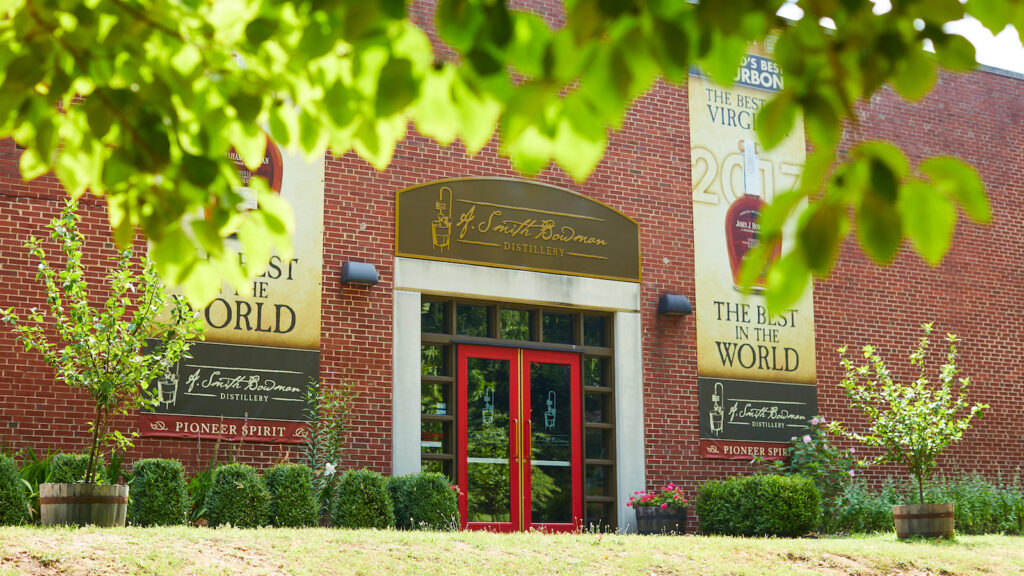 At A. Smith Bowman, master distiller Brian Prewitt has close to 500 experiments going on right now, in his effort to push the limits of what traditional bourbon can be.

Oppidan Spirits in Illinois makes three bourbons: a four grain using 68% corn, 14% wheat, 9% rye, and 9% malted barley; a solera aged that is made using a five-grain mashbill of corn, malted rye, chocolate malted rye, and two types of barley, then aged solera-style in American oak, French oak, and oloroso sherry casks; and Smoke + Sea, which is a combination of the four grain and solera aged that is finished in French oak and peated Islay scotch barrels.

“I don’t think what we’re doing is too outlandish,” founder and distiller Jeff Walsh says of those creative techniques. “I don’t think it’s that intentional. It’s just things that strike me or people around me as things that would be fun to do that nobody else was doing.”

6 of the Best Bourbons That Aren’t from Kentucky

That same ingenuity drives Brian Prewitt, master distiller at Virginia’s A. Smith Bowman, who says that the distillery has close to 500 experiments going on right now. “We’re willing to try all sorts of stuff,” Prewitt says. “Just really pushing the limits of what we feel traditional bourbon can be.” A. Smith Bowman does not disclose the proportions of their mashbills, but uses corn, rye, and malted barley.

The minds at Driftless Glen in Wisconsin are similarly in search of something new, crediting the water and climate for imparting a unique flavor on their bourbon but not stopping there, as they experiment with barrels that previously held sherry that was infused with Seville oranges. “I want to do something that I haven’t ever seen before,” distiller Max Thibodeaux says. “I’ve never really heard of that from anyone else.” Driftless Glen’s bourbon has a mashbill of 60% corn, 20% rye, 10% malted barley, and 10% unmalted barley. 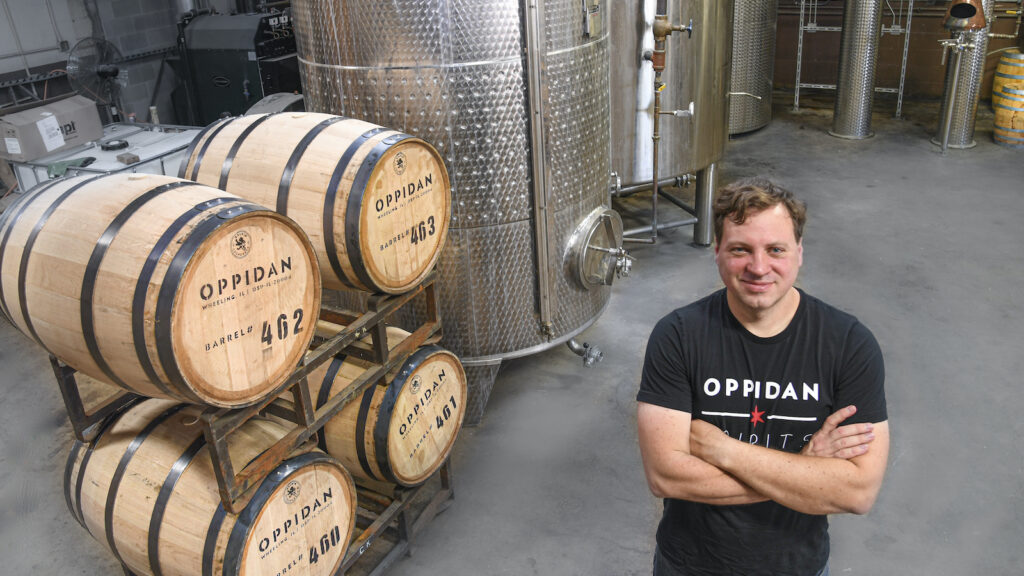 Driftless Glen continues to let its whiskey age, bottling at about 5 years old, and while age is only one indicator of quality, it is true that, as many craft distillers age their whiskey longer, the bourbon is getting better. Orlin Sorensen, co-founder of Washington’s Woodinville Whiskey, was determined to change the conversation around craft whiskey, and that started with being patient enough for the whiskey to mature sufficiently.

“We did the unaged whiskey early on and the age-your-own-whiskey kit, things that kept the doors open and cash coming in, so we could sit on the whiskey until it was a proper age,” Sorensen says, “and really be something that could stand with some of the great Kentucky bourbons.”

Woodinville was solidly supported by their community for years, and Sorensen credits early success to a culture of embracing locally made products, from coffee to beer and wine. “For the consumer, craft is part of their life; it’s a mainstay. Craft always leads to innovation,” he says. “That culture here has certainly helped us get to where we’re at.” Many of these distillers and owners see an opportunity to serve their communities and tell stories about their state. They can be intentionally unlike Kentucky in their methods, but build a similar culture around crafting good whiskey.

“Who would try and replicate the Mona Lisa?” Welter says. “I think craft distillers have done well to create their own style.” In that sense, these distillers have been liberated and feel free to explore bourbon’s boundaries.

So while Kentucky bourbon, like those legacy steakhouses, will always fill the seats, today’s whiskey drinker is equally excited about what’s new, and beating the crowds. 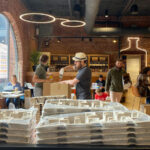 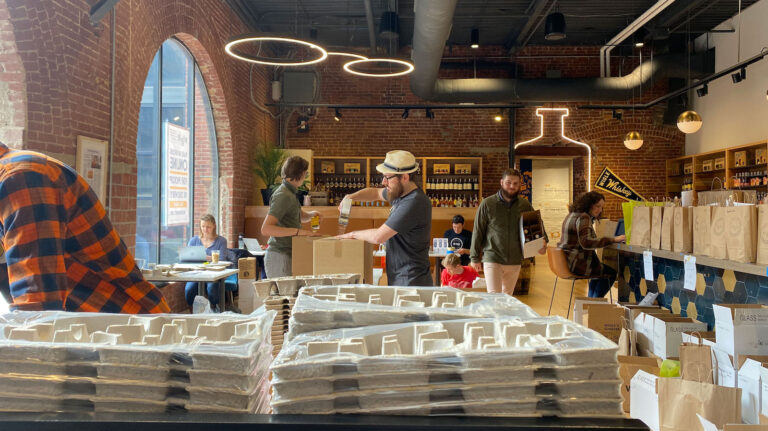