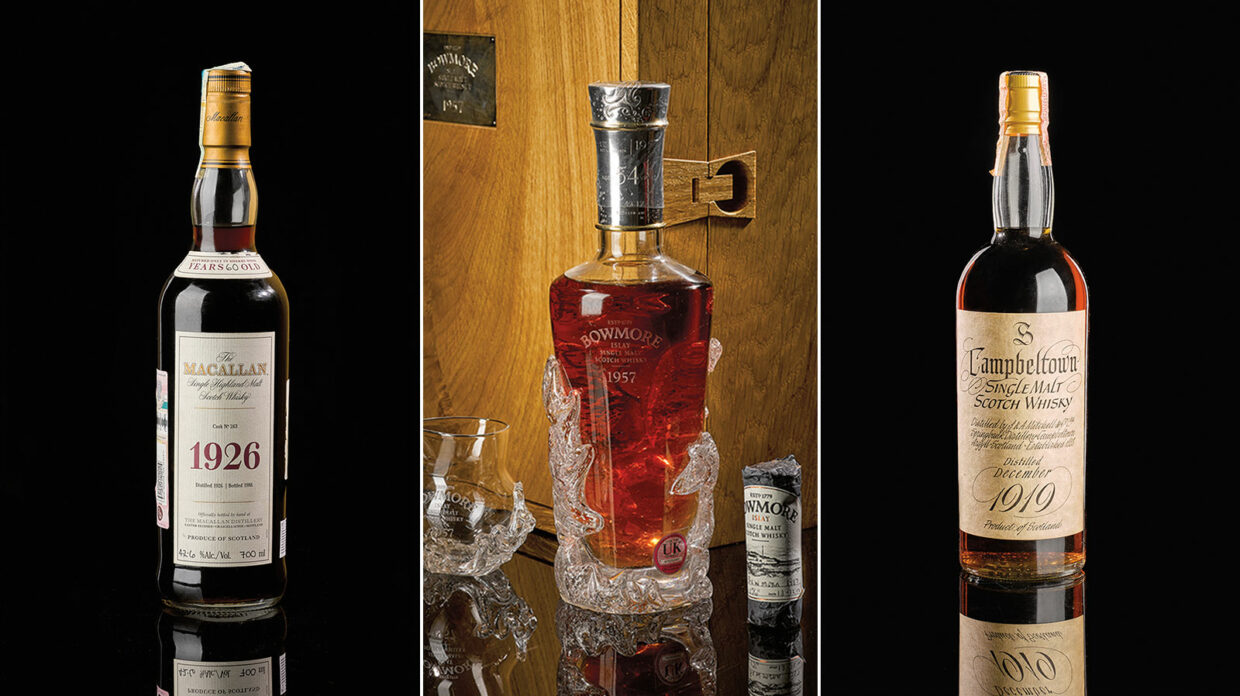 Rare bottles from Macallan, Bowmore, and Springbank can fetch high prices at auction. (Courtesy of Sotheby's and Bonhams)

Hey Big Spender! Your convenience store may sell whisky, but not these whiskies. Big-ticket whiskies reside in glass cases in specialty spirits shops, priced more in line with luxury goods and fine art rather than everyday drinks. The most expensive whiskies available can span opulent new releases, auction bottles bought to resell, and unsold collectibles with prices that have risen commensurate with their scarcity. The retail prices bear little relation to the cost of production, and some would even say reality, but then you wouldn’t expect to buy a 50 year old whisky based on the price of malted barley, sherry casks, and labor from five decades ago.

So, if not raw materials, what makes these whiskies so expensive? For one, age comes at a premium, and scotch whisky is way out in front on this one due to a combination of history, technique, and a favorable climate. Macallan, Glenfarclas, Dalmore, and Gordon & MacPhail have all released whiskies 60 years and older. Due to evaporative losses, genuine scarcity drives demand. The cynic might also recognize that other releases are limited tactically, to coincide with a particular anniversary or founding year.

A distillery’s long-standing reputation for quality is another component contributing to a big-ticket price; simply compare the variation in price for scotch whiskies from different distilleries with identical age statements. The cachet of an estimable distillery means that official releases typically exceed the costs of independent bottlings, which come from casks bottled by another entity. After all, a cover rarely achieves fame greater than the same hit sung by the original artist. 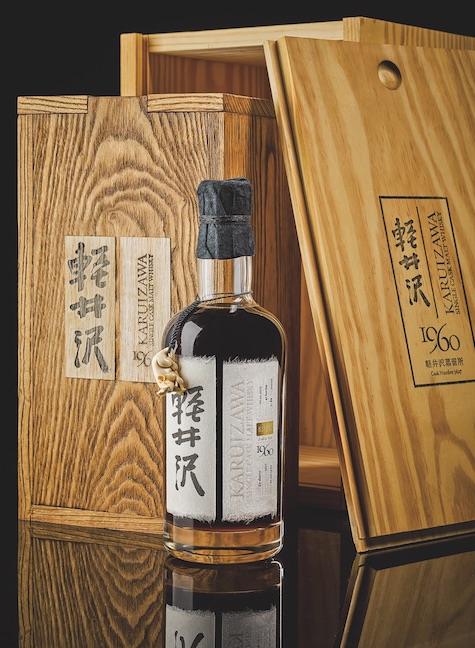 The style of whisky cannot be ignored either; single malt scotch is valued higher than blends, and scotch and Japanese whiskies far exceed the prices paid for bourbon. The challenge for the whisky producers pricing these big-ticket whiskies is finding the sweet spot between greed and a giveaway, where the whisky will do well for the company’s bottom line without handing an easy profit to flippers looking for a quick resale. In 2020, Irish Distillers Ltd. released Midleton Very Rare Silent Distillery Chapter One, priced at $40,000, the first release in 16 years from the Old Midleton Distillery, which closed in 1975. No Irish whiskey had ever been priced at this level before, yet all 48 hand-blown Waterford Crystal decanters sold out quickly as demand outstripped supply. Irish Whiskey Auctions, Dublin auctioned a bottle for $45,155 in March, earning the record for the most expensive Irish whiskey ever sold at auction. “This was 45 year old Irish whiskey from a fabled closed distillery,” says Brendan Buckley, marketing director for Irish Distillers Ltd., who was responsible for setting the price. “These precious stocks were highly unique, comprising the only peated single malt whiskey ever to come from the distillery, which arose from experiments conducted in the early 1970s by Max Crockett, master distiller. By its very nature, this makes it one of the world’s rarest whiskeys.”

In this top slice of the whisky market, affluent fans may be motivated by nothing other than their love for whisky; the bottle may be a reward to be savored slowly, or added as a trophy to a collection. For some, it is the honor of being the custodian of a legacy. Sophisticated investors and syndicates also buy up high-end bottles as speculative investments. Big-ticket buyers are indisputably wealthy, but it’s not a case of having more money than sense. Most are extremely knowledgeable and even in this altered world, top-end whisky prices in the saleroom look relatively stable and many have been growing handsomely, indicating that there are still plenty of people looking for precious whiskies. “Clients come to Sotheby’s to find the world’s most iconic whiskies offered in the most innovative auctions,” says Jonny Fowle, spirits specialist at Sotheby’s. “Whisky collecting now has a global audience of passionate and knowledgeable collectors who recognize the inherent rarity and exceptional quality of these premium spirits, whether ultimately they choose to drink or collect them.”

Even if you have the means to take ownership of a big-ticket bottle, it takes connections. Many deals are made privately, to a store’s most loyal customers or by dealing directly with the distillery. High rollers may be courted with exclusive dinners and personal concierge levels of service like that afforded to Las Vegas whales. So, where’s the pleasure in watching a bottle of Macallan sell for over a million dollars? Perhaps it’s just good knowing that we’re all part of the same whisky-loving family. It is awe-inspiring to know how delicious the dram in our glass is, and to imagine, just for a moment, what an experience money might buy.

Splurge Worthy: 7 Bars Where You Can Buy Whisky Bragging Rights