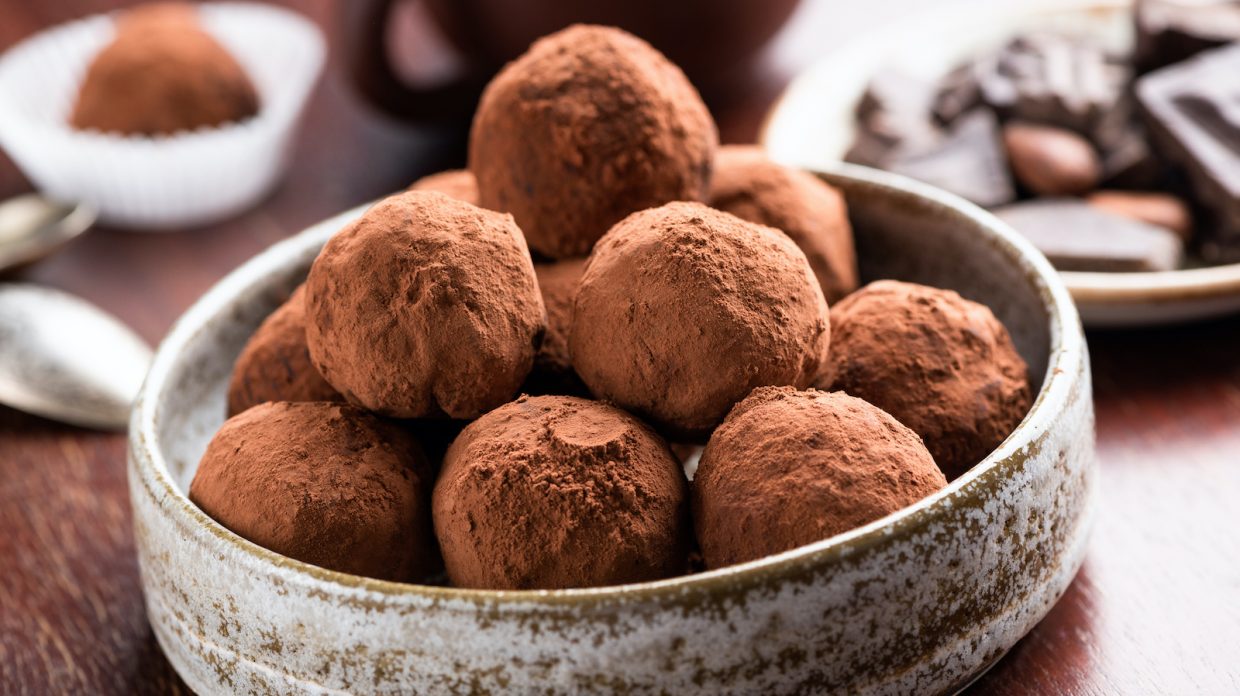 Bourbon balls are easy to make—you don't even have to turn on the oven. And you can customize them with any whiskey you choose. (Photo by iStock/Arx0nt)

Bourbon balls have everything going for them—whiskey! chocolate! pecans!—yet they’ve remained a regional delicacy, found mainly in Kentucky, for close to a century. But over the past decade or so, hundreds of bourbon distilleries have opened well outside the borders of the Bluegrass State, and the delicious treats are now gaining a foothold far and wide.

It makes sense: Bourbon balls are a sweet that even non-whiskey drinkers can appreciate. There are as many variations on the classic as there are chefs and home cooks who make them, but as a rule, all bourbon balls feature some combination of chocolate, nuts (usually pecans), and whiskey. Beyond that, however, it’s up to the cook.

“I think what makes bourbon balls a local favorite, and the reason for their ever-increasing popularity, is the nuance,” explains Matthew Bell, executive chef at Gray & Dudley at downtown Nashville’s 21c Museum Hotel. “Bourbon balls can be so simple and so specific to each region, town, or family, and they can also be complex and highly debated. Whatever your style, they are immediately addicting.”

Southerners have been enjoying bourbon balls since at least the late 1930s; Ruth Hanly Booe is widely credited for devising the recipe in the course of her work at Rebecca Ruth Candy in Frankfort, Kentucky. The treats were a success almost immediately, and many home cooks, pastry chefs, and candy-makers created their own versions. Distilleries with gift shops almost always offer their own bourbon balls, made using the whiskey that’s aging nearby. Jim Beam, for example, has two kinds for sale: the Rebecca Ruth bourbon balls, which are made with Jim Beam White Label, and the magnificently named Happy Balls, which incorporate Knob Creek.

So many unexpected bourbon ball variations have been developed since their inception that it’s no wonder they are finally finding favor and fame outside of the South, especially as American whiskey’s ranks continue to expand. Take Brandywine Branch Distillers in Elverson, Pennsylvania, which produces a lineup of bourbons and ryes. The distillery partnered with a local bakery, Cakes & Candies By Maryellen, in West Chester, Pennsylvania, to offer custom bourbon balls in its tasting room and bistro. They’re made with Resurgent Custom Cask straight bourbon, which was aged in white oak barrels with a particularly dense grain.

Because Brandywine Branch is located in the northeastern part of the country, its customers generally aren’t familiar with bourbon balls. A delicious education ensues. The distillery offers a range of pastries and other treats that incorporate its whiskeys and gins. “The bourbon balls are definitely among our top-sellers,” says national sales director Scott Avellino. “Guests get the first taste of our bourbon when sampling a flight and are so intrigued that they have to cap off the night with a bite of the delicious delicacy.”

Making bourbon balls yourself is fairly simple—no baking required. For home cooks looking to try their hand at bourbon balls, chef Bell has some important advice. “It is helpful to have a bowl of water to wet your hands while you are forming them,” he says, noting the mixture’s sticky consistency. “Also, don’t be afraid to try different bourbons, or even dark rum. For traditional bourbon balls, I like to use Maker’s Mark. Because I’m in Nashville now, I like Collier and McKeel Tennessee whiskey because it’s local and, at 86 proof, it’s perfect for a little bite.”

Because of their versatile flavor profile, and their generally diminutive size, bourbon balls are great both after a meal and as a snack. “I prefer to eat bourbon balls as an after-dinner treat or mid-afternoon snack with a coffee,” says Erin Laughlin of whiskey-focused restaurant The Twisted Tail in Philadelphia. “They’re also a nice complement to drinking bourbon neat, and bring out various notes in the whiskey.”

Avellino, however, sounds a note of caution for home cooks—and this is perhaps the most important aspect of the entire process: “Don’t drink all the bourbon,” he urges. “Save some for the actual recipe!”

Combine all the dry ingredients in a nonreactive bowl. Mix corn syrup and ⅓ cup bourbon in a separate bowl. Then use a wooden spoon to combine the wet and dry ingredients, adding dry to wet, until thoroughly mixed; add more bourbon if needed. The mixture should be moist but firm. Refrigerate for two hours.

Using a small bowl of water, wet hands and form the mix into balls a bit smaller than a ping pong ball in size. Place the powdered sugar in a separate bowl and roll the balls in the sugar. Store in an airtight plastic container in the refrigerator for up to four days. Bring to room temperature before serving.

In a small bowl, combine the pecans and ¼ cup of the bourbon. Cover with plastic wrap and let sit until the pecans have absorbed some of the bourbon, 2 to 3 hours. Drain and reserve the bourbon. Grind the Nilla Wafers in a food processor, yielding 2 cups of crumbs. Melt the chocolate chips.

In a large mixing bowl, combine the chopped pecans, ¾ cup bourbon plus the remainder of the bourbon that was used to soak the pecans, Nilla Wafer crumbs, melted chocolate, ¼ cup powdered sugar, and corn syrup. Stir until smooth.

In a separate bowl, coat each ball in remaining powdered sugar. Transfer the bourbon balls to a parchment-lined rimmed baking sheet. Cover and chill for at least 2 hours or until firm, and keep chilled for storage, bringing to room temperature before serving. Store in an air-tight plastic container for up to one month.

Place the pecans in a jar and pour the bourbon in before sealing with a lid. Allow the nuts to soak at room temperature for approximately 8 hours.

In a mixing bowl, combine the butter, vanilla, and sugar until smooth, then fold in the pecans.

Using a cookie scoop, form the mixture into balls and drop onto a tray. Freeze for an hour until hard.

Melt the chocolate in a double boiler over gently simmering water, stirring frequently and scraping down the sides of the bowl to prevent burning. Once melted, dip the balls into the chocolate to coat and then place on a clean tray lined with parchment paper.

Before each bourbon ball cools, gently press a piece of candied ginger or peppermint stick into each one. Store in the refrigerator until ready to serve. 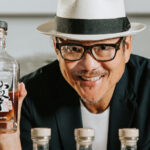 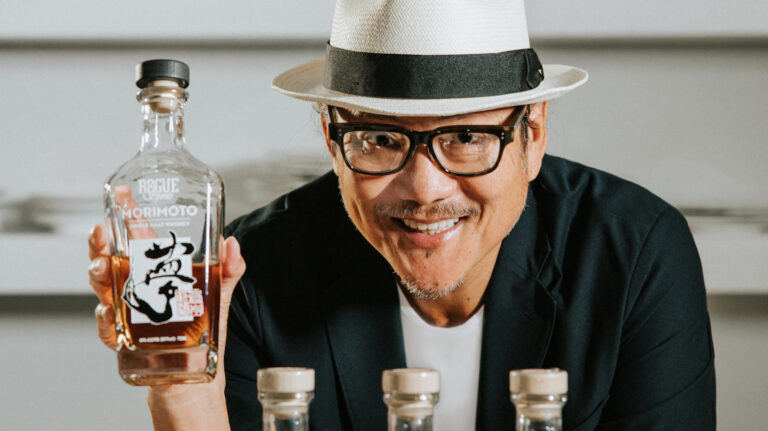 The chef partnered with Rogue Spirits to create a unique beer-based whiskey. 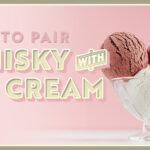 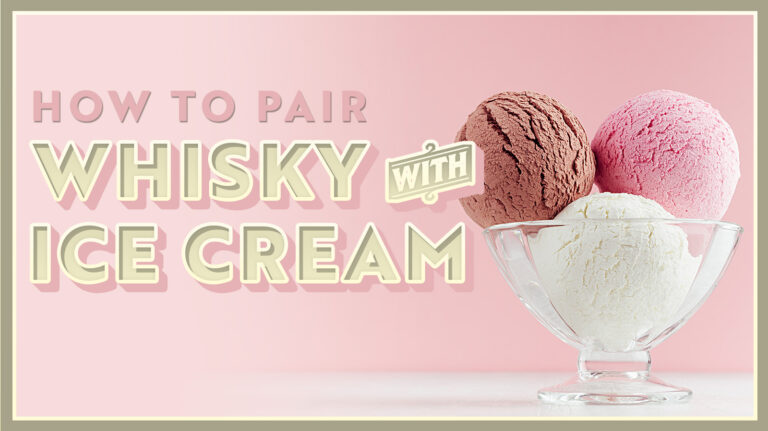 Start by selecting the dram, then find its perfect frozen match. 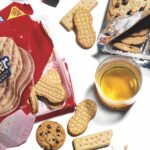 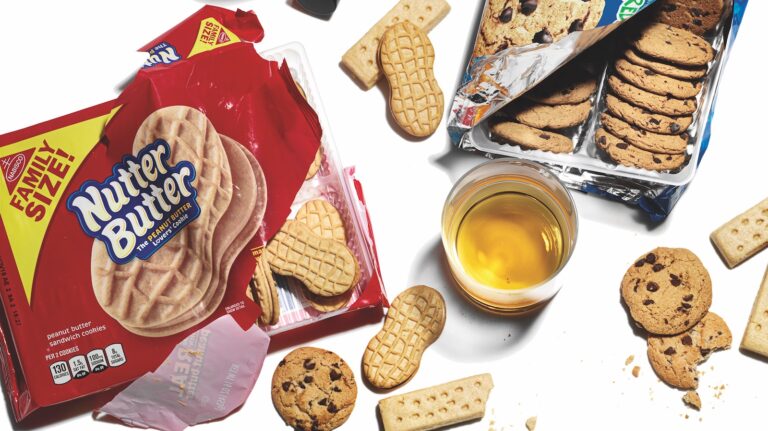 Approach a potential match by considering what both elements have in common.