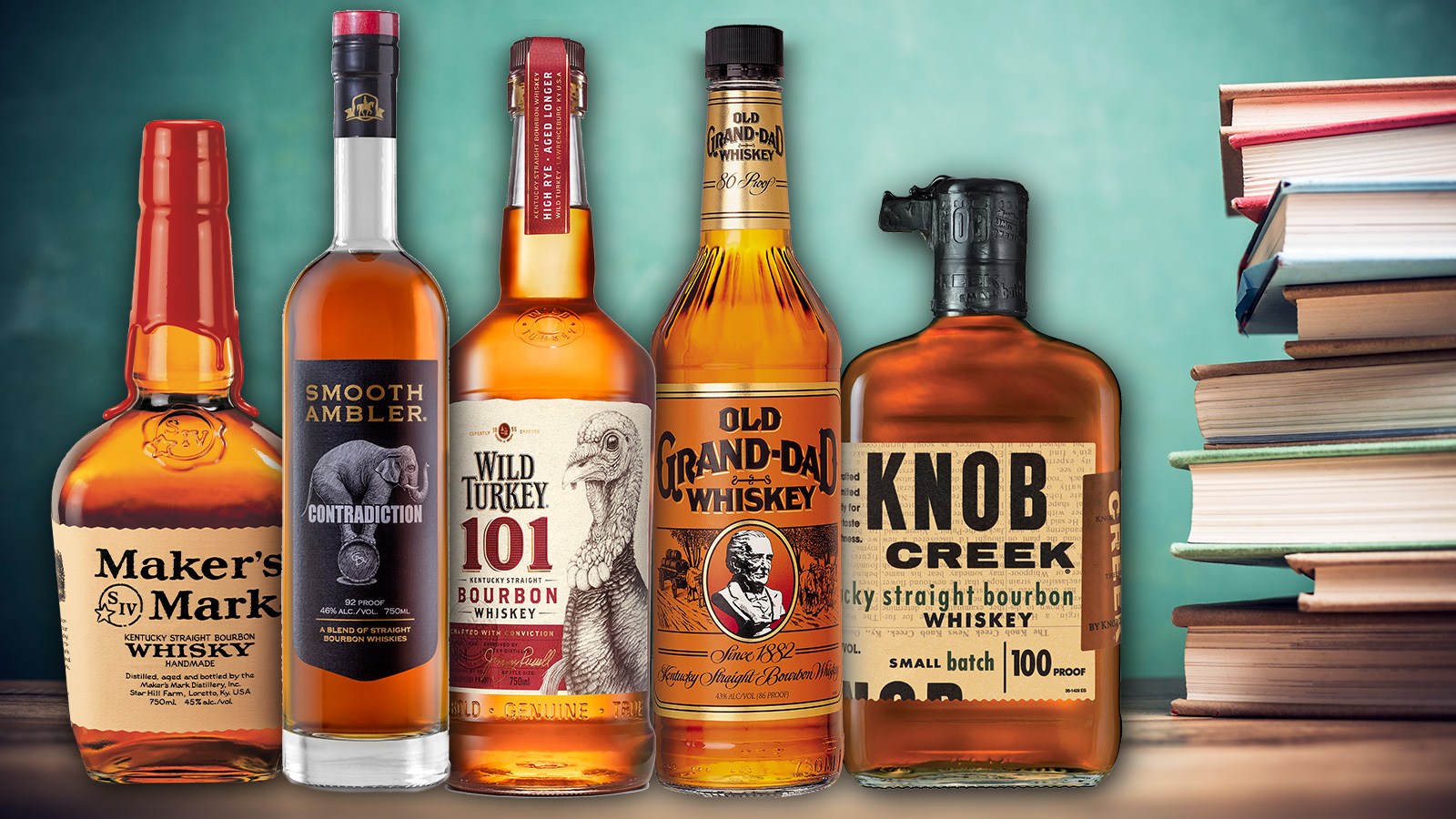 Nobody ever wants to look like a beginner, even when it comes to drinking whiskey. Folks have their first sip of whiskey—and fall in love with it, of course—and all of the sudden they want to drink the rarest and most sought-after bottles, like Pappy Van Winkle or the Buffalo Trace Antique Collection. But in order for a new bourbon drinker to understand why certain whiskeys are so highly regarded by connoisseurs he or she must lay the groundwork first.

Just like you don’t start college in a 400 level course, you shouldn’t start a bourbon hobby without first learning about, and drinking, the classics. These recommendations are essential bourbons for neophytes—not just in their crowd-pleasing, iconic flavors, but also in the history and cultural significance each displays. Knowing about and appreciating both characteristics are an important first step in your bourbon education.

Bourbon 101: Start Your Education With These Whiskeys

Wild Turkey 101—86 points, $25
The “kickin’ chicken” is a bourbon that many people may have tried way back before they had any aspirations of appreciating whiskey. That’s because Wild Turkey’s steal of a price tag has long made it a favorite of the young and thrifty crowd. That doesn’t mean the whiskey is lower in quality. Master distiller Jimmy Russell—who’s been making Wild Turkey for over six decades—and his son and co-master distiller, Eddie—who’s been making it for about half that time—have never compromised on making top-level whiskey. And despite a price that’s within reach even for loan-strapped college grads, this is a great, adult bourbon. It’s spicier and more aggressive than most entry-level whiskeys, but versatile enough to sip neat, on ice, or in cocktails.

Old Grand-Dad Bonded—82 points, $25
Another great value bottle, Old Grand-Dad is often derided as being bottom shelf—maybe in location, but hardly in taste. Using the same mashbill as the way pricier Basil Hayden’s bourbon, this has a higher proof which means bigger, bolder flavor. The “Bonded” designation indicates that the whisky is 50% abv and at least 4 years old, as well as being made by one distiller at one distillery during a single distillation season. Way back when, in 1897 when the Bottled in Bond Act was passed, that designation was intended to eliminate any shenanigans; today it can still be understood as a mark of quality.

Maker’s Mark—89 points, $25
The quintessential wheated bourbon, Maker’s Mark is easy to find on the shelf—unlike many others in the same style (such as Van Winkle and Weller) that have become so festishized they’re near-impossible to obtain. A relative newcomer, it debuted in 1958, with the first “luxury” price tag for bourbon—a strategy that helped usher the American whiskey industry through the doldrums of the 1970s and ’80s, when most people were drinking vodka and other clear spirits. Today, Maker’s Mark’s sweet and smooth flavor profile makes it an easy sipper for newbie whiskey drinkers and a crowd-pleaser in general. (And if you’re looking for more wheaters to try, we have some suggestions there too.)

Knob Creek—90 points, $32
For many whiskey lovers, this is the first “luxury” bottle they take the plunge on. Part of Jim Beam’s Small Batch line, Knob Creek touts its “pre-Prohibition” style that’s big on flavor and body. Oaky, spicy, and sharp on the palate, the cost-to-complexity ratio is about as low as they come. Bottled at 50% ABV, Knob Creek also serves as a bridge to higher-proof and more expensive bourbons.

Evan Williams Single Barrel—91 points for 2010 Vintage, $30
While America’s first single barrel bourbon, Blanton’s, has become a tad too scarce to recommend for beginners, another great single barrel offering, Evan Williams, is there for the score—and at a remarkable price. Of course, even the most unseasoned whiskey drinker knows that all bourbon ages in a barrel—but until trying a true single barrel offering, most folks don’t realize that all those millions of barrels taste different from each other. So, depending on which bottle you pick up, Evan Williams Single Barrel will have slight flavor variances—but it will always taste delicious.

Smooth Ambler Contradiction—86 points, $45
Many new bourbon drinkers are surprised to learn that bourbon need not be from Kentucky, just from the United States. Smooth Ambler Contradiction is technically a blend of bourbons, featuring the West Virginia distillery’s own bourbon as well as liquid from MGP Distillery in Indiana, which provides whiskey for dozens of different brands. Showcasing the importance of blending acumen, the current 46% ABV release demonstrates how a younger product—which might not be so great on its own—can add verve when combined with a more refined older whiskey. The resulting bourbon is much greater than the sum of its parts.

Booker’s—93 points for Batch 2018-02, $75
While perhaps too “hot” for beginner drinkers, it is still critical to learn why barrel-proof (meaning no water has been added) whiskey is so beloved—chiefly for its intense flavors and customization potential, where the drinker gets to add water to taste. Booker’s was the first mainstream barrel-proof bourbon to hit the market in 1988, initially created by Jim Beam master distiller Booker Noe as a gift for his friends. Remarkably complex, with intense peanut notes, this bourbon is best approached by first-timers with a big ice cube or some added water. (Yes, adding water to your whiskey is totally okay.) Give it some time, though, and you may find that your palate has ramped up to appreciate the full-throated intensity. (Batches vary in proof and score.)