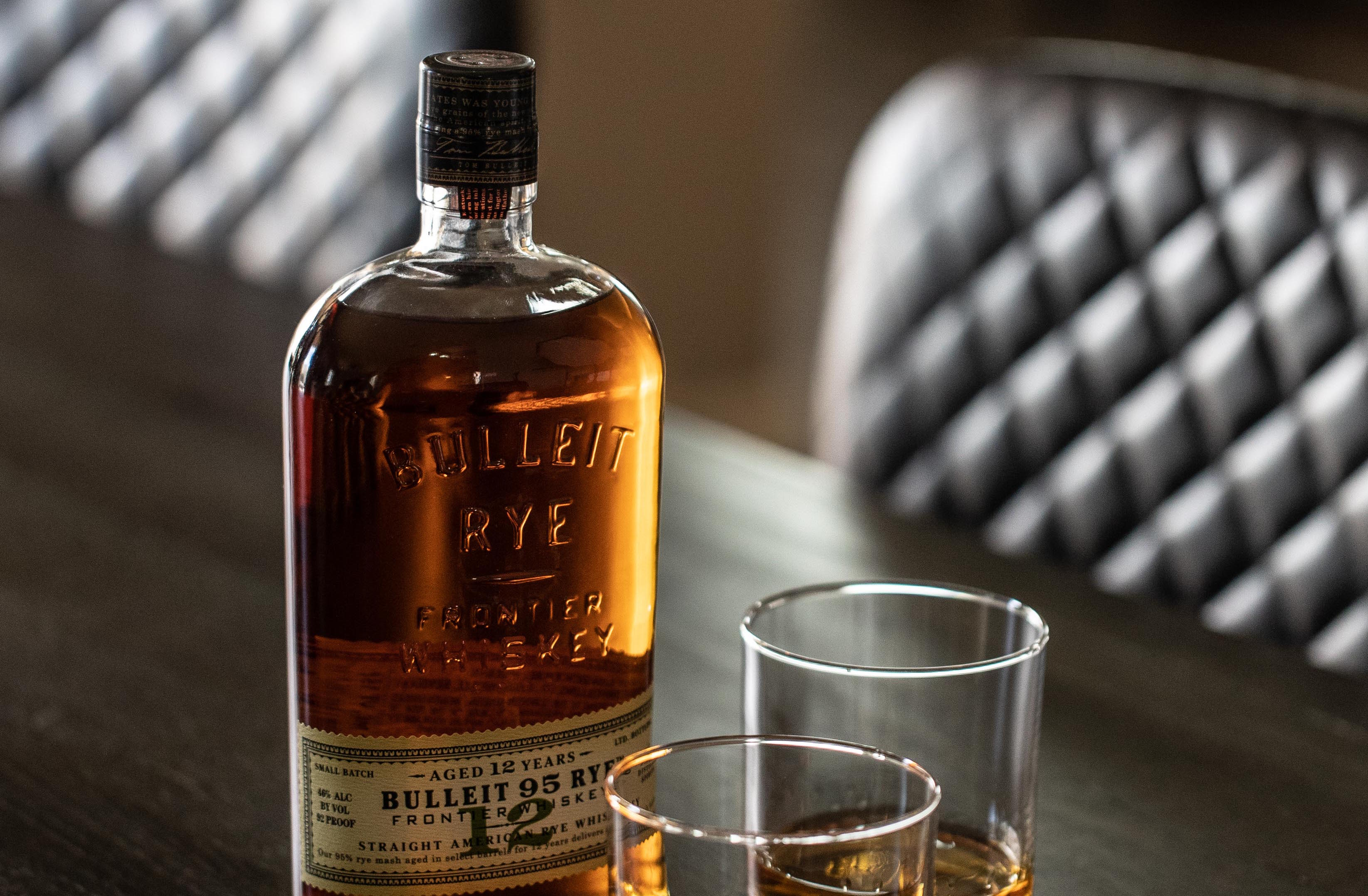 The calendar is about to turn over to a new month, and there will be plenty of new whiskies to look for as spring continues to blossom.

First up, Bulleit 12 year old rye is already on shelves in a number of states, priced at $50. The first age-statement rye from Bulleit uses the same mashbill and distillery source (MGP) as regular Bulleit Rye.

Buffalo Trace announced that it will release a limited quantity of a new, high-proof Weller in June. Weller Full Proof clocks in at 57% ABV (114 proof), the same proof at which it goes into the barrel. Available annually, the suggested retail price is $50.

Meanwhile, Canada is finally sharing one of its best whiskies with its southern neighbor. Gooderham & Worts, a blended four-grain whisky, is now available in the U.S. for $45.

A single malt whisky from Belgium is hitting shelves this spring. Gouden Carolus is made by the same family that owns Het Anker Brewery (which is why the name might sound familiar to Belgian beer fans). It’s priced at $65, with 2,400 bottles initially available.

Nashville’s Pennington Distilling Co. has unveiled Davidson Reserve Tennessee whiskey. Aged for four years in full-size barrels, the whiskey is for sale in the Nashville area for $40.

Westland Distillery is up to its usual April Fool’s Day shenanigans, releasing a single malt whiskey called Celebrious that spoofs the trend of celebrity whiskies. It’s available in limited amounts for $100, for sale at the distillery only.

It’s not a celebrity whiskey, but in that vein, there’s a new whiskey for fans of TV show Ray Donovan. The Fixer blended whiskey comes from the same company behind the Star Trek bourbon and scotch and Predator-themed bourbon. It’s available for pre-order now ($40), with orders shipping in June.

Finally, there are a couple of new, limited-edition whiskies from UK blender Gregg Glass, a Compass Box alumnus. The Glaswegian 29 year old (£130), is a single grain whisky from a closed distillery while King of Trees (£75) is a blended malt finished in casks made of Scottish oak. The whiskies are the first in Glass’ The Whisky Works series, which focuses on experimentation. For now, it looks like the whiskies will not be available in the U.S. 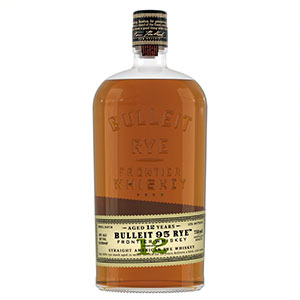 The second rye in Bulleit’s lineup, this whiskey is made with a 95% rye mashbill and aged for 12 years. Like Bulleit Rye, it was distilled at MGP Distillery in Indiana.

Bulleit’s bourbons are made in Kentucky, although nothing that’s currently in the bottle was made at Bulleit Distillery, which opened in Shelbyville just two years ago. That will change over time, as the bourbon matures. The brand’s rye, however, will be made at MGP for the foreseeable future—unless, of course, parent company Diageo’s planned mega-distillery includes some capacity for distilling Bulleit rye. 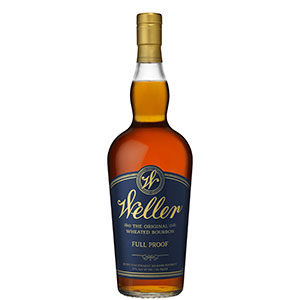 Buffalo Trace Distillery is adding a “full proof” version of W.L. Weller. The wheated bourbon is filled into barrels at 114 proof (57% ABV), and this bottling clocks in at the same level.

“Full proof” isn’t a regulated term, but here it’s being used to indicate that there is no change in the alcohol level from the time the barrel is filled until it’s bottled. Does that mean there’s no fluctuation in proof as the whiskey matures and loses volume due to the angels’ share? Not really—it’s basically a given that a barrel of whiskey will undergo change in proof during its maturation. Sometimes, the proof goes down—this is almost always the case in Scotland, for example, where the relative humidity of the environment means alcohol evaporates more quickly than water. Other times, when the maturation environment is dry and hot, the water is quicker to evaporate, causing the whiskey’s proof to rise. This is how you can end up with bourbons like Stagg Jr. achieving proof levels that exceed 62.5% (125 proof), the maximum proof at which whiskey can enter the barrel.

So in the case of Weller Full Proof, Buffalo Trace likely mingled a batch of barrels at varying proofs, some higher than entry proof, and some lower, and then added water to get back to 114 proof. 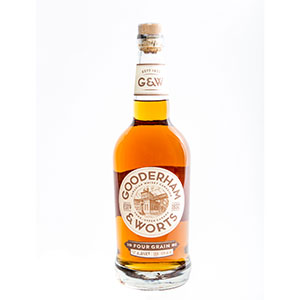 Previously available only in Canada, this whisky is now for sale in the U.S. A blend of corn, rye, wheat, and barley whiskies, it’s made at Hiram Walker Distillery in Windsor, Ontario.

The good thing about whiskies that are technically not new, but new-to-the-U.S., is that they’re often already reviewed in the Whisky Advocate Buying Guide. Gooderham & Worts is no exception, having scored 90 points in 2015. 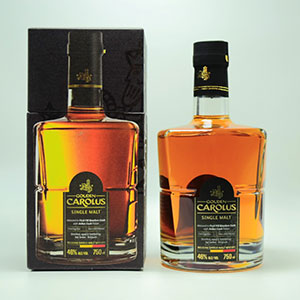 If the name Gouden Carolus is familiar to you, that’s because it’s also the name of a beer made by Belgium’s Het Anker brewery. This whisky was distilled from its tripel mash (meaning it has three times as much barley as a lager) and aged in ex-bourbon barrels before being finished in custom casks that previously held wine and then were scraped and charred. No hops were included in the mash, making this a true single malt (using just malted barley, yeast, and water). The whisky is bottled without chill-filtering.

The late Dr. Jim Swan, who consulted for dozens of single malt distilleries around the world, worked with Het Anker from the start. The distillery’s use of scraped and re-charred casks is surely thanks at least in part to Swan’s influence, as he pioneered the method known as STR—shave toast rechar. Look for a review of this single malt in an upcoming issue of Whisky Advocate! 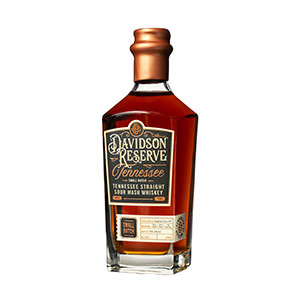 The first Tennessee whiskey from Pennington Distilling Co., this is made with a mashbill of  70% corn, 25% rye, and 5% malted barley. It was aged for four years in 53-gallon barrels. Like all Tennessee whiskeys, it goes through the Lincoln County Process.

We often get asked what the difference is between Tennessee whiskey and bourbon. Both styles have to be made to almost exactly the same standards, after all, with Tennessee whiskey’s main differences being its place of origin and its use of maple charcoal filtration, aka the Lincoln County Process. If you still aren’t clear about the distinction, let Jeff Arnett, master distiller for Tennessee’s biggest whiskey brand, explain it to you. 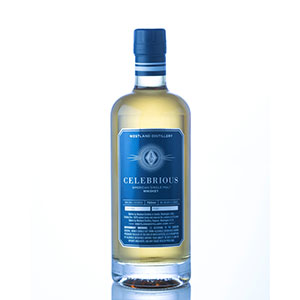 For the third year running, Westland Distillery is releasing a spoof whiskey for April Fool’s Day. This year, the whiskey is Celebrious, an American single malt that pokes fun at celebrity whiskies and insists that “everyone deserves a sip of fame with nothing more than a swipe of the screen.” With Celebrious, you are the celebrity and this is your whiskey. “Own it.”

Although Celebrious is a single malt whiskey like everything that Westland makes, it is a special blend with a distinct flavor profile. Westland’s past spoof releases include last year’s Sport Dram and Boldsmooth, a “quadruple-quadruple” whiskey. 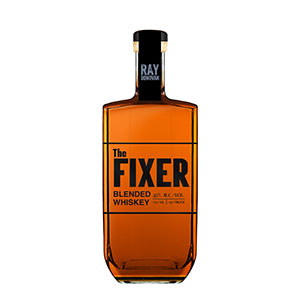 TV character Ray Donovan is a “fixer,” and now you can be too—at least, a fixer of drinks. This sourced, blended whiskey is named for the character played by Liev Schreiber. There’s no information about it available, other than that it’s produced by Terressentia Corp., which sources whiskey from a number of U.S. distilleries, typically finishing it with its ultrasonic-wave process, and bottling it for various brands.

This whiskey comes from Silver Screen Bottlings, the same company behind James T. Kirk bourbon, Montgomery Scott scotch, and Dutch bourbon. There’s no telling how it will taste, though, especially since it’s a blended whiskey—which could be up to 80% neutral spirit (on a proof-gallon basis). If you’re a big Ray Donovan fan, however, flavor may not matter as much as novelty. 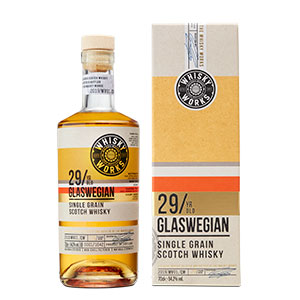 This single grain whisky was distilled at a now-closed distillery “that once stood at the heart of Scotland’s waterways,” according to the press release. Considering its name, the likely source is Port Dundas, which operated in Glasgow on Forth and Clyde canal until 2010. Notably, this whisky’s casks were mainly held in dunnage warehousing, which is unusual for any scotch but particularly so for a grain whisky. 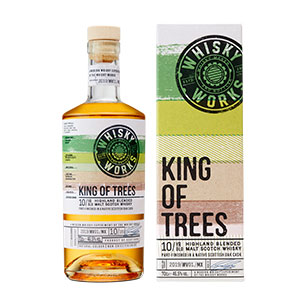 The Whisky Works King of Trees

This blended malt includes whiskies from the Highlands and was partly finished in a cask made of Scottish oak.

These whiskies are the first launches in a new brand called The Whisky Works, helmed by Whyte & Mackay head blender Gregg Glass, that will focus on experimental expressions. Glass formerly worked at Compass Box, so his experience with blending and innovation is well-established. Both of these whiskies will debut at Whisky Live London and then be available exclusively from The Whisky Exchange for the next two weeks before being sold through The Whisky Works website. They are not for sale in the U.S.