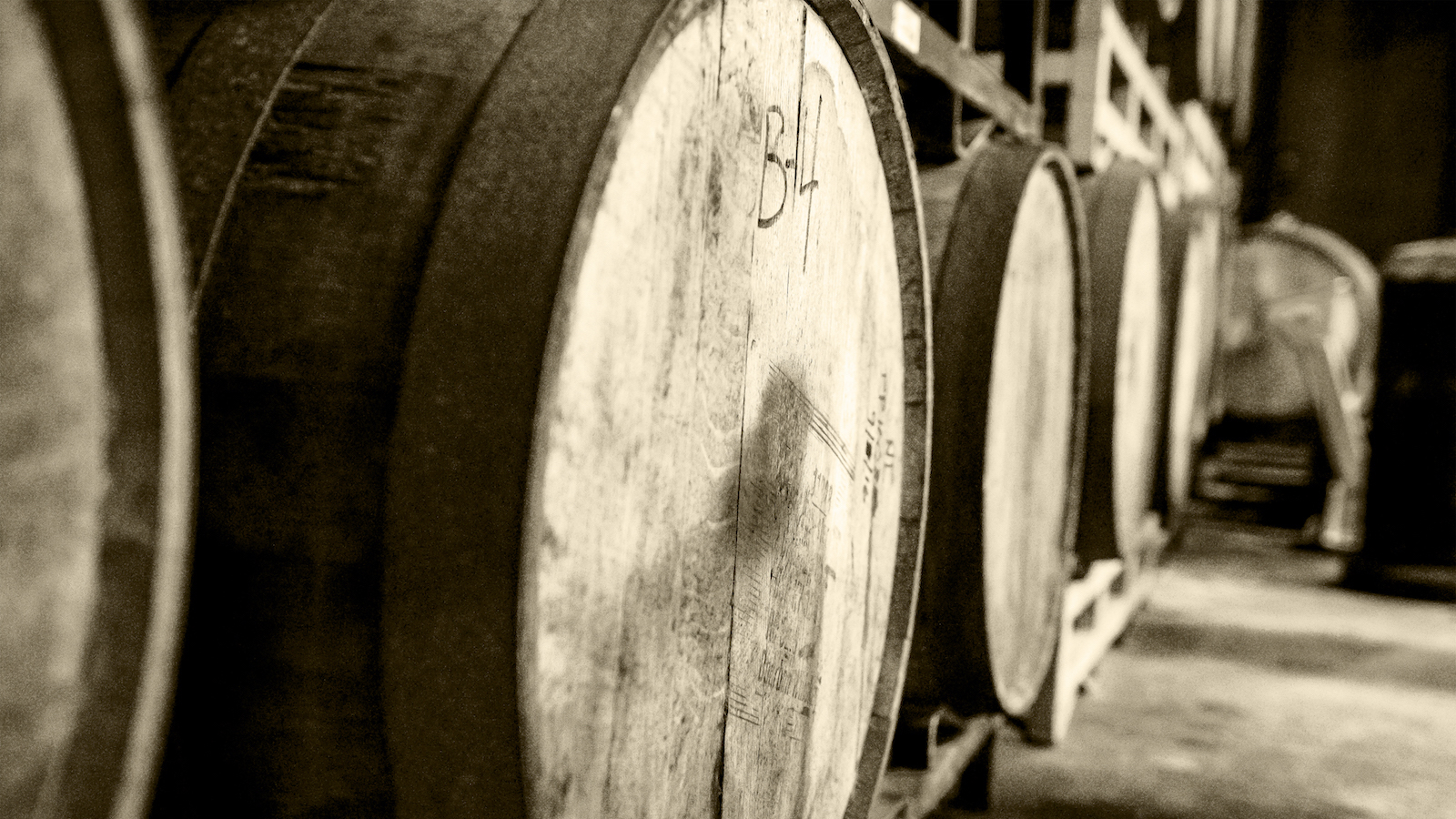 Highly aged bourbon is prized by many, but distillers say that extra time in the barrel isn't always a good thing. (Photo by iStock/Adrian Davidson Photography)

Twenty years after being distilled, most bourbons have long since been bottled and, hopefully, consumed. If the whiskey is still in the barrel and hasn’t completely evaporated or taken on the flavor profile of an oak stave, it’s a small miracle. Yet the appeal of the high age statement endures, embodied by the most desired bottle of all, Pappy Van Winkle’s Family Reserve 23 year old. And, despite Pappy’s recommended retail price of $270, its actual shelf price is almost always several times more than that.

Accordingly, more and more super-aged bourbons have hit high-end back bars and store shelves in recent years, with prices to match their age statements—from the increasing series of ages for Orphan Barrel Rhetoric ($140 for the 25 year old) to Heaven Hill 27 year old ($400) to Michter’s 20 year old ($700) and 25 year old ($800). Boutique independent bottler The Last Drop sourced a Buffalo Trace bourbon that was distilled in 1982 and aged for 20 years before being transferred to stainless steel storage tanks, charging $4,000 for each of the 44 bottles available. And Redemption Whiskey offered 18 bottles of an MGP-distilled bourbon that had been in the barrel for a whopping 36 years, each of them available for $1,200.

If the proliferation of super-superannuated bourbons proves anything, it’s that the older the age statement and the fewer bottles available, the more people will pay for it (or, at least, the more companies will charge). But is the bourbon itself benefiting from that extra aging? Not necessarily; the Whisky Advocate blind tasting panel, reviewing Heaven Hill’s 27 year old, scored it 90 points, but also advised that “this elder statesman deserves respect, but is nonetheless past its prime.”

Even the people who make it tend to put a ceiling on bourbon’s quality past a certain age. Distillers for several different brands, by and large, all said their personal “sweet spot” for bourbon was anywhere from 5-12 years old. As Harlen Wheatley, master distiller at Buffalo Trace, says, a bourbon in that range has “a good balance of time in the barrel and freshness from the recipe. It’s flexible with drinking on the rocks or in a cocktail.”

Beyond 12 or so years, however, the prospects get dicey. “When barrels age longer than 15 years, the bourbon picks up a sour or bitter taste from the barrel,” says Wild Turkey master distiller Eddie Russell. Brent Elliott, Four Roses’ master distiller, says that as bourbons age into their teens, “you can still find some incredible barrels, but they get harder to find. You’re taking more of a chance. They’re more likely to become harsh and astringent, and they’re going to lose those lighter floral notes.”

Whiskey novices might equate the aging process of bourbon to that of scotch, which often boasts age statements at 12 years old and higher. But the climate in Kentucky is more extreme and changeable than in Scotland—hotter in the summer, colder in the winter. Those temperature shifts cause the barrels to expand (when hot) and contract (when cold), pushing the liquid in and out of the wood and resulting in a quicker and more pronounced maturation process than in Scotland, where the relatively stable temperatures create much less dynamic aging conditions. Bourbon must also age in new charred oak barrels, while scotch, for the most part, employs used barrels, with an effect similar to reusing a teabag. Bourbon gets more flavor in a shorter time from the virgin, charred oak, meaning a 20 year old bourbon and a 20 year old single malt scotch aren’t comparable at all.

The longer a bourbon stays in the barrel, the more the barrel’s influence comes through in the flavor of the final product, ranging from sweet vanilla to peppery spice. All bourbon should have strong oak flavors, but there’s a fine line between a well-oaked bourbon and one that tastes like a piece of wood; it’s a test of the expertise of the distiller and his or her team of tasters to determine when a whiskey is ready to bottle—and when it’s past its peak. Andrea Wilson, master of maturation at Michter’s, says, “We have a rigorous maturing management program where we take samples at least twice per year, and if we find a barrel that has reached a peak, we don’t just leave it in wood. We will remove the barrel from the warehouse and hold the liquid in steel tanks [until it’s time to bottle].”

It’s sometimes difficult, with a bourbon that old, to add enough to the blend that it contributes in a positive way without creating any astringency or flat character. It’s a balancing act. – Brent Elliott, Four Roses master distiller

What happens when a bourbon does cross the line from old to too old? “The whiskey takes on bitterness and astringency, as well as too much wood character,” Wilson says. “Essentially, the oak overshadows any of the beautiful notes that took years to develop.” Fortunately, the results can—with some creativity—be salvaged. “You could blend it slowly into a younger whiskey,” notes Wheatley. “You lose the [ability to include a high] age statement, but some of the components could actually help a younger bourbon.”

When putting together Four Roses’ 2017 Limited Edition Small Batch Al Young’s 50th Anniversary bourbon, Elliott used some extra-aged bourbon in the mix. “We had 23 year old whiskey in there,” he says. “Al said he wanted some older barrels in there, and we found 20 barrels of 23 year old.” However, it was a challenge to blend. “It’s sometimes difficult, with a bourbon that old, to add enough to the blend that it contributes in a positive way without creating any astringency or flat character. It’s a balancing act.” As a result, the 23 year old whiskey made up only 6% of the blend.

The Price You Pay for Age

As the demand for long-aged bourbon grows, distilleries are experimenting to find out how far they can push the boundaries of age. Most distillers rely on cooler spots in their warehouses, less subject to temperature swings, to get a few extra years of wood aging without overwhelming the whiskey too much. But some are taking it even further. In 2018, Buffalo Trace created a special climate-controlled warehouse where they’ll attempt to age bourbons for up to 50 years, comparable to the oldest whiskies aged in the much cooler climes of Scotland. Wheatley describes the process: “We are in continuous testing mode to monitor the bourbons and whiskeys as they age. We are aging the bourbons at a reduced temperature and a set humidity to determine how that affects the aging process.” Check back in 2068 to see if the experiment works out.

Even though super-old bourbon can often be astringent and over-oaked, there are exceptions—and they’re usually superb. “I’ve seen barrels that I thought, ‘This is past its peak,’ and after about 11, 12, 13 years, they wind up getting really interesting,” says Elliott. “The bourbon can take a left turn and take on some light berry notes, which you totally wouldn’t expect.”

In the end, for those that spend the money on them, the appeal of old and rare bourbons doesn’t necessarily hinge on how they actually taste. “I certainly believe that some of the increase in super-aged bourbon is driven by status, prestige and rarity by those looking to collect or invest,” says Wilson. Elliott adds, “When I’m showing people around the distillery, they’ll ask, what’s the oldest bourbon you’ve got? And I’ll taste them on a 23 or 25 year old, and I’ll tell them, this isn’t gonna taste very good. But they don’t care—they just want to taste a really old bourbon. And some people are willing to pay a lot of money for that kind of experience.”