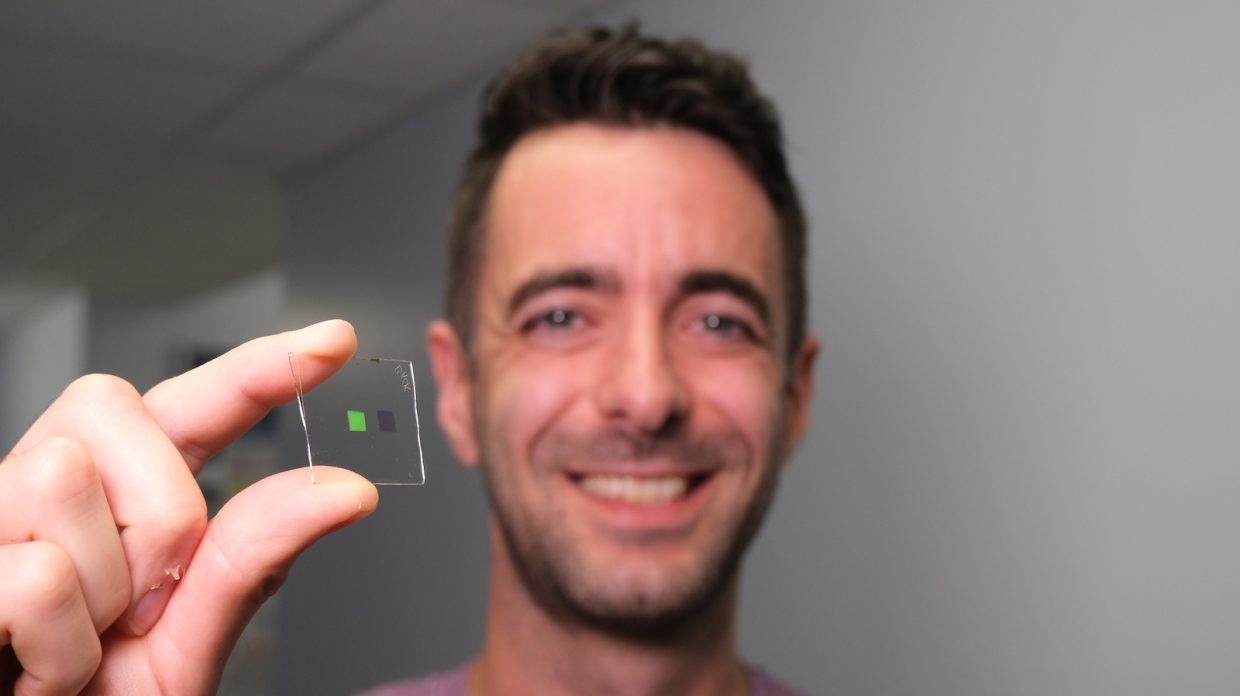 Scottish researcher Alasdair Clark holds the "artificial tongue," a nanotechnology that can differentiate among whiskies.

Could a tiny tool hold the key to rooting out fake whiskies? When a group of Scottish scientists published their research on a nanotechnology detector that could differentiate among seven different whiskies, it set tongues wagging—and raised speculation that the end of fake whisky was near. While such a claim sounds exciting, Whisky Advocate wanted to know the real potential—and limitations—of the technology, especially with regard to high-end collectibles.

How the Artificial Tongue Works

Developed by Alasdair Clark’s research group, the artificial tongue consists of approximately 2 million synthetic taste buds, made of gold and aluminium, that are roughly 100 nanometers by 100 nanometers across, or about a thousand times smaller than the width of a human hair. At this size, metal takes on certain optical properties where it starts to absorb and scatter light: The whisky is “tasted” by measuring the wavelength of the light shining back. Seven whiskies, as well as vodka, water, and ethanol, were measured 30 times each to build up specific statistical profiles. “We call it a tongue, not a sensor, because typically with a sensor, you’re looking for a particular compound—for example, an explosive or cocaine,” says Clark, a lecturer at the University of Glasgow’s School of Engineering. “An artificial tongue can detect the profile of a liquid, but it’s not looking for any particular compound.” Once a whisky has been “tasted,” the artificial tongue will recognize its subtle profile characteristics if it meets that liquid again in the future.

Think of it like facial recognition software, which uses pattern recognition to examine the unique configurations of our eyes, nose, and mouth. Walk from Central Park to Battery Park in Manhattan and you will pass thousands of strangers, yet you can still pick out your brother or sister from the crowd because you know their face. But a database that doesn’t already know their face would fail to spot them.

When it came to testing the artificial tongue on single malt scotch, the researchers chose Glenfiddich, Laphroaig, and Glen Marnoch (a private-label brand bottling sold in the UK by grocery chain Aldi), all at 40% ABV. “We bought them with our own money,” Clark laughs. “We didn’t want there to be a scandal about researchers spending government money on whisky.” (Given the nanoscale of the experiments, the team only had to purchase 50-ml miniatures.) They opted for different ages of whisky from a single distillery (Glenfiddich 12, 15, and 18 year old), as well as different cask finishes (Glen Marnoch sherry, bourbon, and rum cask-finished). “We threw Laphroaig 10 year old in there because it tastes really different, so we wanted to see if it looked different too,” Clark adds. The researchers discovered that each whisky produced a unique fingerprint tied to its chemistry through the scattering of the light through the liquid.

The Implications for Whisky Collectors

Here’s the crux of the matter for whisky collectors: Every whisky that is chemically different will look different when tested, whether it’s single malt scotch, a blend, Irish pot still whiskey, new make, bourbon, or rye. So if you test two bottles of Pappy Van Winkle and the artificial tongue finds they “taste” different to one another, it cannot tell you if they’re two separate batches, or if one is fake and one is real. It’s not really measuring anything—just spotting patterns. It can tell you that two whiskies are different, but unless it’s met them before, that’s the extent.

This prototype won’t be eradicating fakes en masse, but it does have a promising commercial future. It’s quick, effective, portable, and reusable; it’s just that it’s more suited to the bottling hall than the auction house.

“Much like any human tester, it needs to know what that whisky tastes like in order to know if it is different from the baseline,” says Clark. In order to spot counterfeit whisky, the artificial tongue would need a huge database of benchmarks for reference. That means it would be nearly impossible to use this technology for spotting a forgery of a rare or antique whisky; examples of such bottles, like 19th-century Macallan, are in short supply and cannot be verified using this technique without a confirmable reference.

This prototype won’t be eradicating fakes en masse, but it does have a promising commercial future. It’s quick, effective, portable, and reusable; it’s just that it’s more suited to the bottling hall than the auction house. Whisky makers want to maintain the same compositional profile over and over again, and the artificial tongue can detect when that profile might be drifting—even though it won’t be able to say why it’s drifting. Ultimately, the artificial tongue may be best used to identify bulk counterfeit whisky being trafficked across international borders or sold illegally in unscrupulous bars. This wide-level counterfeiting has the potential to damage the health of consumers and the reputation of the brand, so whisky makers are highly invested in combating it.

Of course, the artificial tongue can be used for much more than whisky; it’s just that Clark and his colleagues thought using whisky for the research would attract more attention. “We chose whisky…because we thought it might be sexy enough to get some publicity,” Clark says. “It was almost a throwaway comment that [the artificial tongue] could be used for anti-counterfeiting, but that’s the thing that people latched onto. It could be, but I’m not sure that’s the most useful application for it.”