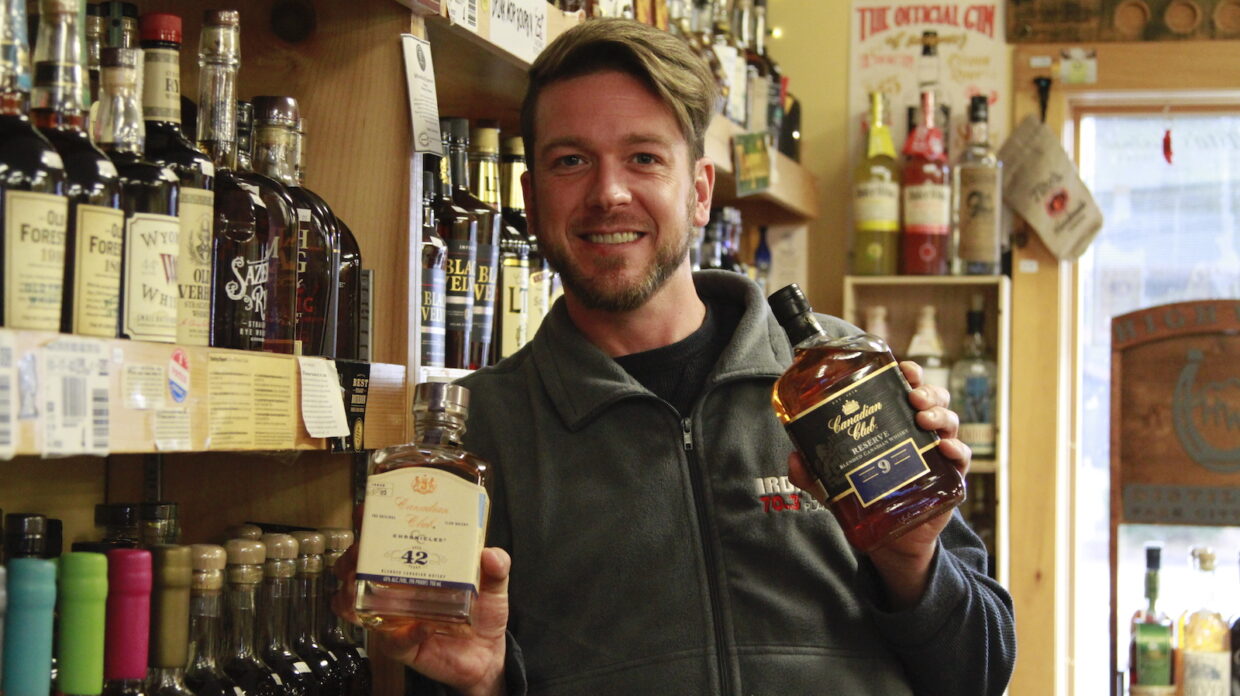 Tim Robinson co-owns Terry Robard's Wines & Spirits in Lake Placid, New York and carries two Canadian Club whiskies. He's on the hunt, however, for a much more elusive offering from the Canadian brand.

When most people go hunting for whisky, they comb local liquor stores and enlist out-of-state friends. Tim Robinson’s quest, however, has him digging through dirt. Robinson and a few of his Lake Placid, New York neighbors are hoping to find a long-buried case of Canadian Club. Starting in 1967 and until 1981, the brand buried whisky around the globe as part of its “Hide a Case” campaign. From Australia to Arizona, fans could uncover the hidden treasure using cryptic clues offered in print advertisements. Some—like one hidden under a desk in a Manhattan skyscraper—were found, while others remain hidden to this day. Among them is the case Robinson believes is buried in Lake Placid, hidden in 1979 ahead of the 1980 Olympic games.

“I’ve got a lot of pride in this town,” says Robinson, who co-owns Terry Robards Wine & Spirits. “So to see something this big that fits exactly what I love and my passion, which is whisky, plus you mix in the history of the town and everything else, it just really makes for something special.”

The hidden case of whisky has become a bit of local lore, with its precise location highly speculated upon for years. Robinson first learned about it from his friend D.J. O’Neil in April and later during a local Lions Club meeting. With the help of his sleuthing neighbors, he feels confident he knows where to look. The original advertisement notes “those who seek gold will miss [it] by a quarter mile” and that the team that buried it “followed our sixth sense.” These hints led Robinson to a piece of land owned by O’Neil, about a quarter-mile away from the Olympic ski jump site, an address formerly listed as 6 Riverside Drive. 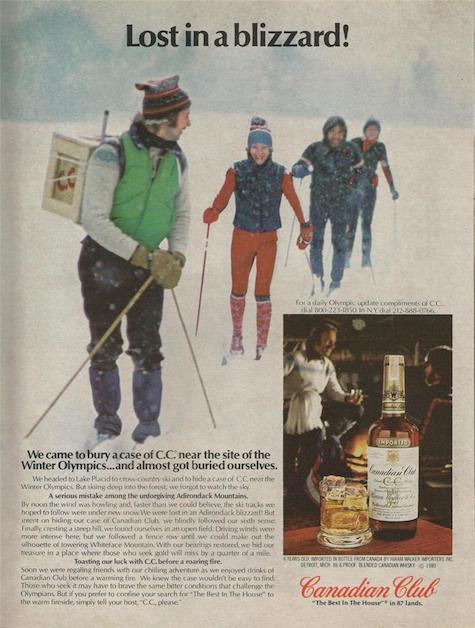 Canadian Club printed ads such as this one to give whisky drinkers clues about the whisky cases’ locations. (Photo from messynessychic.com)

What’s more, the previous land owner apparently assisted the Canadian Club team in burying the case, which Robinson learned about through a mutual friend of the family. Barb Erickson’s husband, John, went out into the snow on that fateful night and while she won’t divulge the exact spot, the family secret as to the case’s whereabouts has passed through a few hands on its way to Robinson. “There hasn’t been any real recovery effort, but a lot of the locals I’ve talked to remember this ad campaign and the rumors are still around town about the missing whisky case,” he says. “We’re just going to kind of dig some holes right where we think it’s going to be at the edge of the cedar trees. All of the clues kind of line up.”

Robinson began digging on  Nov. 7, after spending the previous weekend searching for fence posts to better locate the case. The ad mentions a “fence row,” but like the address, a lot of the landscape has changed in the decades since the whisky was hidden. O’Neil is joining Robinson in the search, as are representatives from distributor Southern Glazer’s Wine & Spirits.

But what will happen to the whisky if or when they find it? “We haven’t even talked about how we’d split up the case,” Robinson says, figuring that if the case holds 12 bottles, he, O’Neil, and others aiding in the search could divide the loot among themselves. One thing’s for sure, though: He intends to open at least one bottle. “I would 100% open up the bottle and taste it and share it with a lot of people, as far as it would stretch,” he says. If he’s able to keep a few bottles, Robinson says he’d like to feature one as a showpiece in his store and add another to his personal collection.

Canadian Club has been part of Beam Suntory since 2011, the year after the brand revived the “Hide A Case” campaign with a connection to an upcoming season of “Survivor.” Under the new ownership, though, Canadian Club can’t help Robinson in his quest, saying records of any remaining cases have been lost to history. “While we at Canadian Club weren’t able to assist Tim in his current search for a hidden case in Lake Placid, we’re rooting him on and wishing him a safe, fruitful dig!” Tish Harcus, Canadian Club global brand ambassador, tells Whisky Advocate. “We can’t guarantee that any whisky that remains would be advisable to drink, but it sure would be a once-in-a-lifetime piece of whisky history.”

Robinson plans to document the journey on his Instagram page and hopes to garner some buzz for both his liquor store and Lake Placid. “There’s a whole community out there that are really interested in whisky, [though] not so much Canadian whisky—but this is also mixed in the history of it too,” he said. “Apparently Canadian Club, back in 2008, claimed four or five of the cases [were] just completely lost. It’ll be cool to just revive one of those lost cases and see if the whisky’s any good.”

Update 11/9/2020: After 15 hours of digging over the course of three days, Robinson and his crew have yet to find the hidden case of Canadian Club (though they made quite the mess of O’Neil’s yard). But they haven’t lost hope. Barb Erickson herself came out to the site, pointing to a cluster of trees near which she remembered the case being hid. While that tip came up empty, Robinson remains optimistic. “I believe we’re searching in the right spot and we inspected everything with lots of eyes on the whole process” he said. “It’s very possible that the case has sunk too deep into the mud. It’s also possible that we we’re too deep into the brush and the case is closer to the field.” We will continue to update this story as Robison continues to dig. You can follow his journey via his Instagram page.