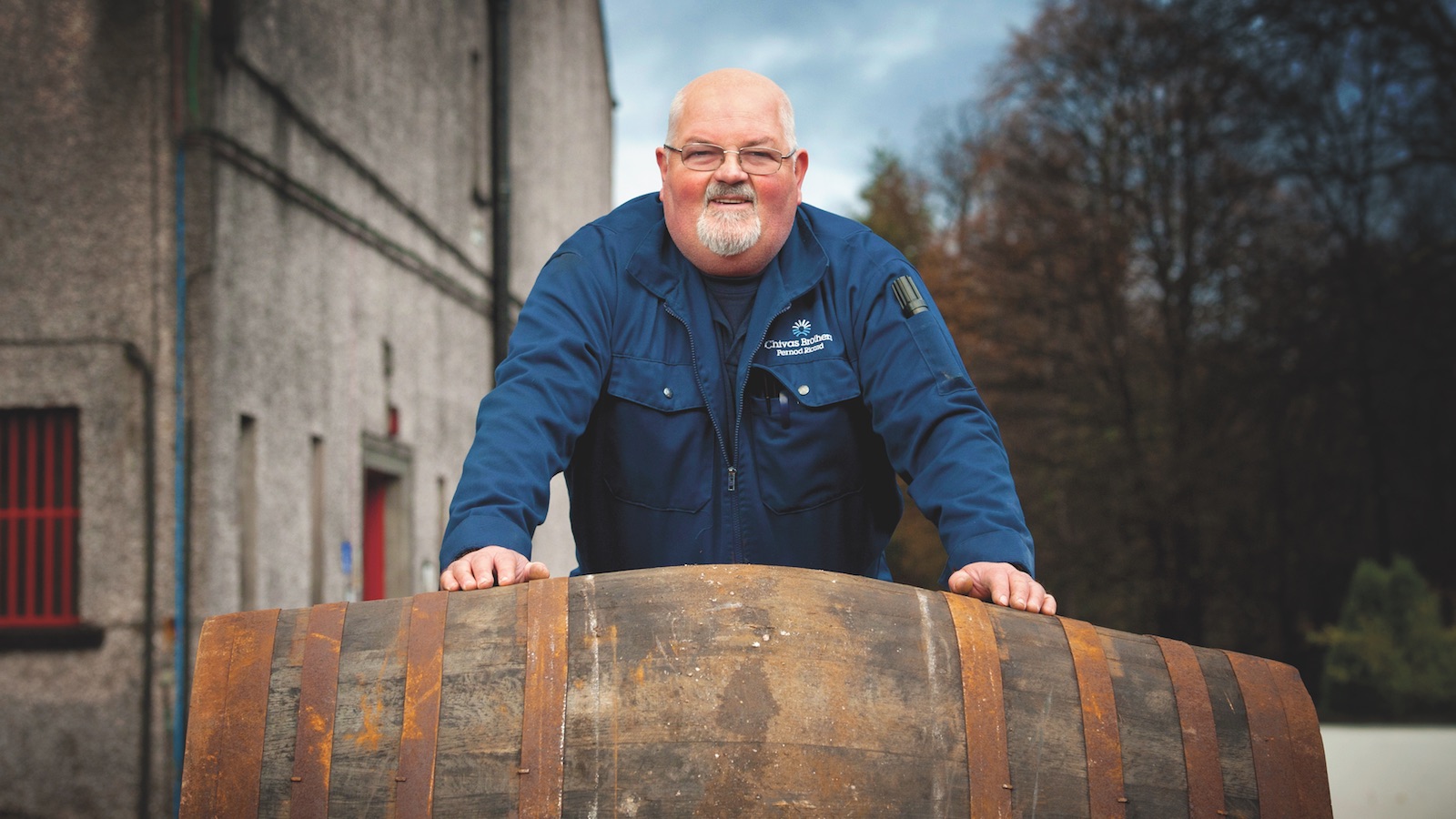 Aberlour Distillery makes one of the most widely enjoyed cask strength single malts, A'bunadh, which is fully aged in oloroso sherry casks. (Photo by Martin Hunter)

Taken at face value, the words “cask strength” signify something extra: alcohol. But there’s much more to these whiskies than just higher proof. Cask-strength single malt scotch, which has no additional water added before bottling, is indisputably more flavorful; the molecules that make up what our noses and palates detect as delicious aromas and flavors are bound to alcohol, not water. With more alcohol in a dram, there’s more flavor potential.

You don’t have to love high proof to benefit from cask-strength whiskies. These whiskies put the power of enjoyment fully in the hands of the drinker. Rather than tasting whisky that has already been diluted to a standard 46%, 43%, or even 40% ABV, the imbiber is left to determine the ideal strength—a process that can be as simple as tasting neat, then adding a few drops of water at a time to taste. Or it can be as precise as measuring out whisky and water and trialing different combinations to methodically determine a particular whisky’s optimal proof. Whatever route you go, cask-strength whiskies simply offer more drinking options.

Formal regulations regarding the term “cask strength” are surprisingly scarce, even among the fastidious Scots. The Scotch Whisky Regulations of 2009 do not define cask strength, but the UK’s Department for Environment, Food, and Rural Affairs noted in a 2013 technical file, “The alcoholic strength of ‘cask strength’ Scotch Whisky must not be adjusted after maturation.” The Alcohol and Tobacco Tax and Trade Bureau (TTB), which regulates whisky labels in the U.S., does not currently have a formal definition of cask strength or barrel proof, but it has issued a ruling: in order to use these terms on the label, the spirit’s proof can’t be more than two proof degrees lower than it was when gauged for tax purposes. So if a whisky exits the barrel at 111 proof (55.5% ABV), it can be no less than 109 proof (54.5% ABV) when it’s bottled.

There are some scotches, like Ardbeg Corryvreckan and Uigeadail, that are always bottled at the same high ABV; but, according to the director of distilling, whisky creation, and whisky stocks for Ardbeg and Glenmorangie, Bill Lumsden, these don’t meet the Scottish standard for cask strength because a little water is added to achieve a consistent ABV across batches. “Generally we’re looking at between 57% and 58% ABV [for the 57.1% ABV Corryvreckan, when it’s initially blended], so obviously very little water is added to that,” he explains. Such minor adjustments would actually qualify as cask strength or barrel proof as far as the U.S. is concerned. Lumsden says that maintaining a consistent proof avoids the need for new labels with every batch. Similarly, Glenfarclas 105 is always bottled at exactly 60% ABV and it does qualify as cask strength; the distillery is able to achieve this uniformity by blending casks to achieve a consistent flavor and proof, avoiding the need to add any water.

In most cases, however, distilleries take the path of releasing cask-strength whiskies in batches, with each batch boasting a unique flavor profile and slightly different proof. Different batches of Laphroaig 10 year old cask strength, for example, vary in both proof and taste experience. For fans, such variations are to be embraced, a telltale sign of each new batch. “It allows people to see different sides of the brand,” says distillery manager John Campbell, who explains that each batch of the cask-strength whisky intentionally varies in flavor. “Everybody who loves Laphroaig has a fantasy to get into the warehouses…and [10 year old cask strength] just takes that fantasy to the end.”

Although cask strength is often equivalent to high proof, that’s not always the case. Some cask-strength scotches soar to 60% ABV and higher, while others reside precariously close to the legal minimum of 40%, usually in the case of very old whiskies, like the 2018 release of Balvenie 50 year old, which was 41.6% ABV. The variance is due to many factors: the liquid’s original strength when it was filled into cask, the length of time it spent aging, and the conditions—including climate, warehouse type, cask type, and warehouse location—under which it matured.

As a whisky sits in the cask, its ABV is affected due to the evaporation of liquid known as the angels’ share. In hot, dry climates, the cask loses water from the solution at a faster rate than it loses alcohol, so the whisky’s alcohol strength increases over time. In Scotland, which is humid and temperate, as a cask’s liquid evaporates, the alcohol strength of the contents decreases.

A cask’s warehouse environment and specific location also impact the final ABV. Casks in a dunnage warehouse, with earthen floors and thick walls, are stacked only two or three high; there’s little temperature variance and steady humidity, and thus fairly even evaporation. In a rackhouse-style space, which has more air circulation and can experience more profound seasonal temperature swings, casks are placed from ground level to several stories high; those in the upper tiers, especially, are exposed to higher temperatures, leading to more rapid depletion of liquid, including alcohol.

For fans of cask-strength scotch, variations in final proof—and flavor—are one of the whisky’s many charms. After Glenfarclas 105, Aberlour A’bunadh was one of the first widely available cask-strength single malts when it debuted in the late 1990s. The whisky, which was created as an homage to Aberlour’s historic 19th-century single malt, is filled into oloroso sherry casks at 63.5% ABV, matured for a range of years, varying by batch, and bottled at cask strength two to three times a year. Yet its batches have varied from 57% to 62% ABV. “Each batch of A’bunadh can be subtly different,” says master distiller Graeme Cruickshank. “They don’t have a direct science where it’s going to come out exactly how you expect it to every time, because there are many different aspects of the maturation.”

Taken literally, cask strength describes only the alcohol strength of the whisky. But because cask-strength whiskies are designed for flavor seekers, a number of other benefits frequently come along for the ride. In the case of Laphroaig, the 10 year old Cask Strength receives only minimal filtration designed to remove large particles of char, but leaving textures and flavors that would otherwise be stripped away by finer filtering. Likewise, at Aberlour, A’bunadh stands alone in its exclusive use of sherry casks, which represent a huge price premium over the bourbon casks that are enlisted along with sherry for the distillery’s other expressions. Because they are designed for purists, cask-strength Scotch whiskies often serve as an indicator of quality.

Is Cask-Strength Scotch A Better Value? We Did The Calculations

However, cask strength does not necessarily indicate a stylistic change or a dramatically different expression. In other words, if you are not a fan of a particular distillery’s whisky at lower proof, you may like it even less at cask strength. The potential exceptions are single-cask scotches bottled at cask strength: these are often oddball casks or one-off releases from independent bottlers that showcase atypical expressions of a particular distillery. They can be surprisingly well-received by drinkers who would normally spurn that distillery’s whiskies. On the other hand, you may pick up a cask-strength, single-cask whisky made at your favorite distillery and taste something utterly unlike what you were expecting. In this case, adding water may bring out familiar notes—or it may not. Caveat emptor.

A caution every cask-strength fan should keep in mind: when consuming whisky at such a high proof, the effects of alcohol are felt more quickly and intensely. This seems obvious, but I doubt I’m the only one who has gotten several drams into a bottle of, say, Tamdhu Batch Strength—a deceptively easy-drinking whisky bottled between 58% and 59% ABV—before noticing just how powerful it is. Even distillers are susceptible to this. “You’ve got to watch the Laphroaig cask strength sometimes, because it can be really smooth,” Campbell says. “It’s like, ‘Where’s the alcohol?’ It’s [seemingly] not there and before you know it, that 120 proof catches up with you.”

It allows people to see different sides of the brand. Everybody who loves Laphroaig has a fantasy to get into the warehouses…and [10 year old cask strength] just takes that fantasy to the end. — Laphroaig distillery manager John Campbell

Sherry cask-matured scotches, like Tamdhu, Glenfarclas 105, and Aberlour A’bunadh, seem to be especially adept at masking their full strength. Cruickshank posits that the sweetness of the sherry softens some of the alcohol punch. “Cask-strength whisky with sherry influence, without water, is much kinder on the palate,” he says.

Cask-strength whiskies are sometimes maligned as “too hot” or “punchy”—unfair accusations for something that simply delivers on the promise of its label. Of course these whiskies taste hot; their alcohol content can be 50% higher than a standard bottling—or even more!

I prefer to add water to most cask-strength whiskies, though the amount varies depending on the dram, and I usually use an eyedropper to avoid over-dilution. Ten to twenty drops of water equals a fraction of a quarter-ounce; added to a 2-ounce glass of 60% ABV whisky, the water doesn’t reduce the strength in a meaningful way. Yet just that small amount tempers the heat of the alcohol on my palate and allows additional flavors and aromas to emerge. If it’s still burning, I can always add a few more drops.

Some people drink cask-strength whisky as-is—no added water, just the full, face-melting experience. I’ve had friends (all men) tell me that they feel sheepish adding water, as if it calls their masculinity—or whisky creds—into question. For anyone feeling similarly, take heart in this confession from Lumsden: “From a purely personal perspective, as someone who uses their nose and palate for a living, I actually am a little bit scared of [cask-strength whiskies]. And invariably, if I’ve got a cask-strength whisky, I’ll take a small sip of it, and get my initial thought process going. But for actually drinking them, I’m bit of a wimp and I generally will cut them with a little bit of water.”

However you like it, remember that drinking cask-strength whisky isn’t a feat of strength; it’s an activity that should make you happy, whatever that tastes like. “Cask strength doesn’t mean to say that your hair is shooting backward and your throat’s on fire,” says Campbell, who’s no stranger to strong whisky. “It can be a quite profound experience.”