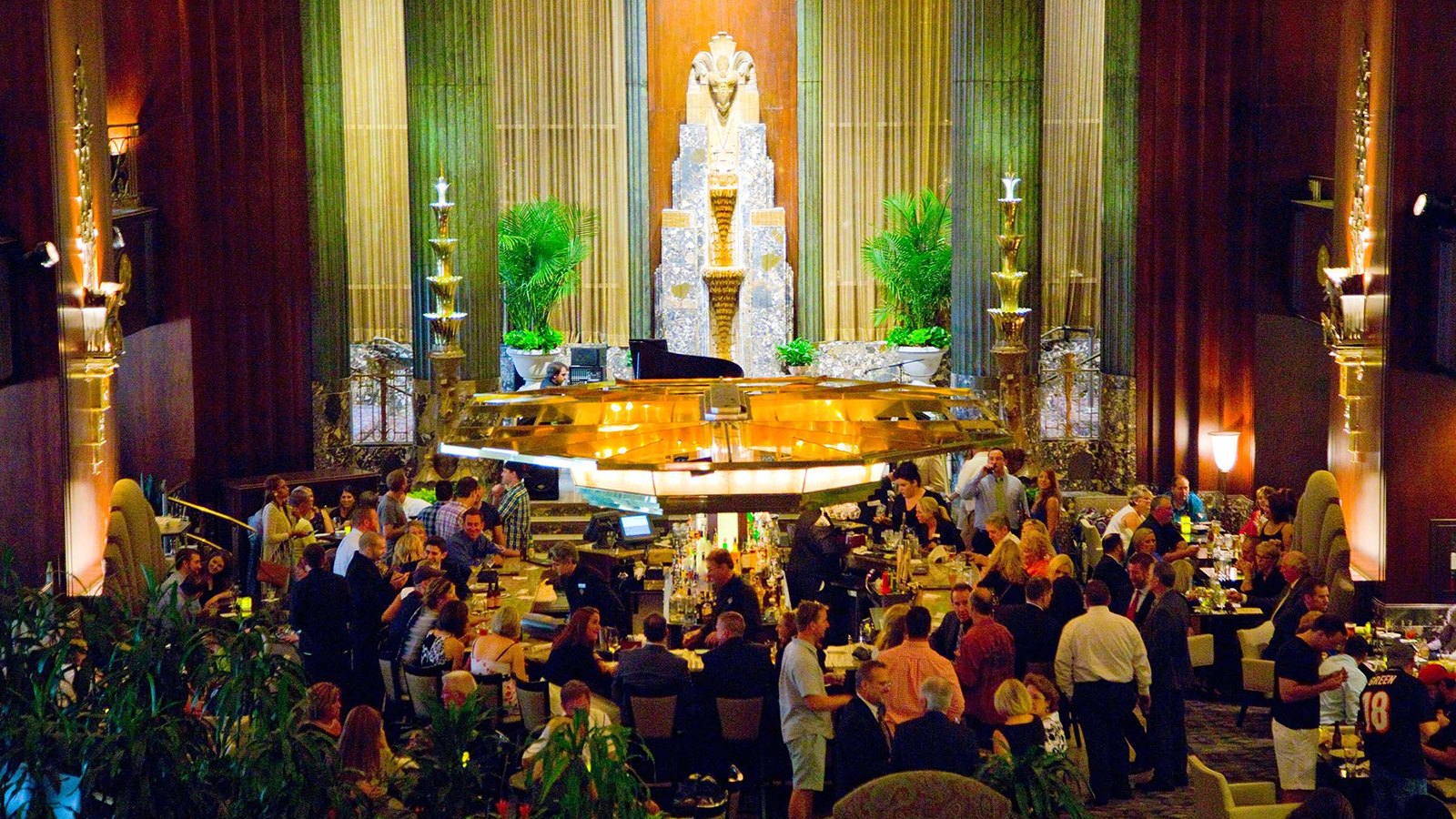 A view of Orchids at Palm Court’s bar located in the Hilton Netherland Plaza.

If you’re planning a bourbon trip, consider Cincinnati. The Queen City sits on the Ohio River across from Kentucky, is only an hour away from most distilleries, and has a strong whiskey scene of its own.

Once you’ve checked in and settled down, your 48 Hours must begin standing next to a bathtub with the words “Since 1861. Arnold’s Bar & Grill.” The tub is symbolic of the restaurant’s Prohibition-era owner, Hugo Arnold, who allegedly made bathtub gin and sold illegal liquor to thirsty customers. Built in the late 1830s, the building is a slice of Midwestern Americana and showcases an old bar that commands the city’s first right of refusal on allocated bourbons. The eclectic menu gives you an inside glimpse of Cincinnati cuisine, with noodles in its chili and the local meat-and-grain sausage called “goetta.”

From Arnold’s, it’s time to cross the bridge and buy bourbon history in a bottle. At Liquor City Uncorked are the most-coveted bourbons of all time: 16 year old and 20 year old A.H. Hirsch and early Van Winkle bourbons bottled specifically for this retailer. Given their rarity, the $6,000 20 year old Van Winkle distilled in 1967 is well-priced in comparison to what contemporary Van Winkles bring at auction. 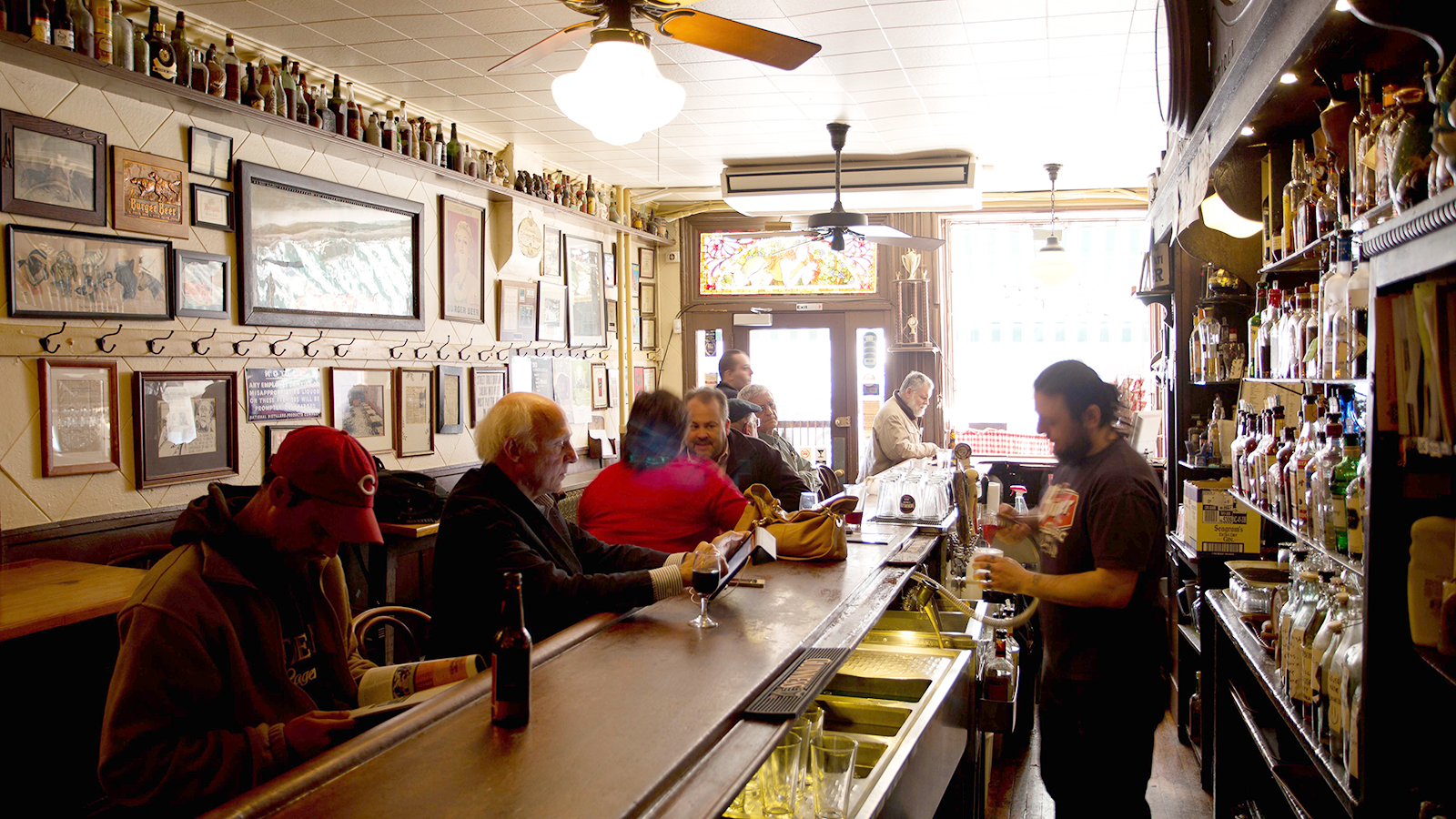 Patrons of Arnold’s Bar & Grill drink in some history.

After Liquor City Uncorked, the Old Kentucky Bourbon Bar is the must-visit establishment that put this area back on the map as a whiskey region. The Old Kentucky Bourbon Bar has more than 400 bourbons and a strong selection of corn and rye whiskeys. To work here, the bartenders must pass a 250-question oral test that covers history and brands, and be able to hold a conversation with a newbie or a whiskey geek. There are no TVs, no scotches, and no food. The focus is on the bourbon, as intended.

For dinner, there’s nothing quite like a thick steak from Jeff Ruby’s, a Cincinnati icon. The traditional family-style dinner is a carnivore’s delight: go with the dry-aged bone-in Hatchet, 30 ounces of ribeye heaven. While Jeff Ruby’s has vegetable options, vegetarians might want to go elsewhere; the scent of searing cow flesh might be too tempting to resist. Jeff Ruby’s offers private barrel selections of Woodford Reserve, Blanton’s, and 14 year old George Dickel.

For a night cap, check out Japp’s, the sister bar to The Old Kentucky Bourbon Bar. In the beautiful Over-the-Rhine neighborhood, Japp’s once met the demand of Cincinnati’s wig wearers. The refurbished spot—all fake hair removed—is now a quaint cocktail bar that is a haven for jazz bands.

If you don’t want breakfast in your hotel, check out the 70 year old Sugar n’ Spice. The “wispy thin pancakes” should coat your stomach for the day of distilleries ahead.

Like many major metropolitan areas, Cincinnati’s distillery scene is blossoming. The first licensed Ohio distillery since Prohibition, Woodstone Creek accepts visitors on Saturdays. Call ahead to make sure there’s a spot.

For lunch, you’ll want to check out the Vine Street dining scene, where you’ll find Taste of Belgium, with Belgian-tinged dishes and an impressive Belgian beer list; Via Vite for classic Italian fare and a great wine list; and Jean Robert’s Table (not open for lunch on Sundays), a contemporary French bistro that offers a French lunch tray for $15.50.

After lunch, it’s time to get your distillery hat back on and head to New Riff Distilling. The beautiful Vendome copper column still is encased in glass and visible from the road. Even if you don’t visit the distillery, you owe it to yourself to see the still, glistening in the light. The distillery is a glimpse of urban beauty and the northernmost leg of the Kentucky Bourbon Trail.

In the same parking lot as New Riff is The Party Source, which claims to be the largest liquor store in America. It’s hard to argue with this claim: when you walk in, your eyes find seemingly endless rows holding more than 20,000 product selections. On average the Party Source carries 300-plus Scotch whiskies, every bourbon brand available in Kentucky, and about 50 private selections, ranging from Whistle Pig 10 year old straight rye to McCarthy’s Oregon Single Malt Cask Strength Private Barrel. The Party Source offers a 10 percent discount on solid case purchases and a 5 percent discount on mix-and-match cases.

Once your trunk is full of the good stuff, hop back in the car and make your evening appointment at one of the smallest distilleries in the country. Northside Distilling is making corn whiskey in an old garage, using a mashbill of 80 percent corn and 20 percent barley.

For your final dinner this quick Cincinnati trip, just down the road from North Side is one of the city’s hottest restaurants, The Littlefield, which delivers whiskey-forward cocktails and whose staff is accustomed to serving you one of their 102 whiskeys neat. The kitchen is bourbon-centric, using it as an ingredient; even the bread comes with “bourbon moody blue butter.”

You’ll want to head back downtown for your nightcap at Sundry & Vice, a cocktail bar with Old Fashioneds and Vieux Carres on draft. Like many preserved old buildings in Cincinnati, Sundry & Vice has character. Its original brick is exposed to view, and there are throwback booths for seating, Sundry & Vice’s theme centers around an early 1900s apothecary with wallpaper made of Prohibition-era prescription notes. Of course, several very sick Cincinnati residents were prescribed whiskey. You can try the cure yourself. 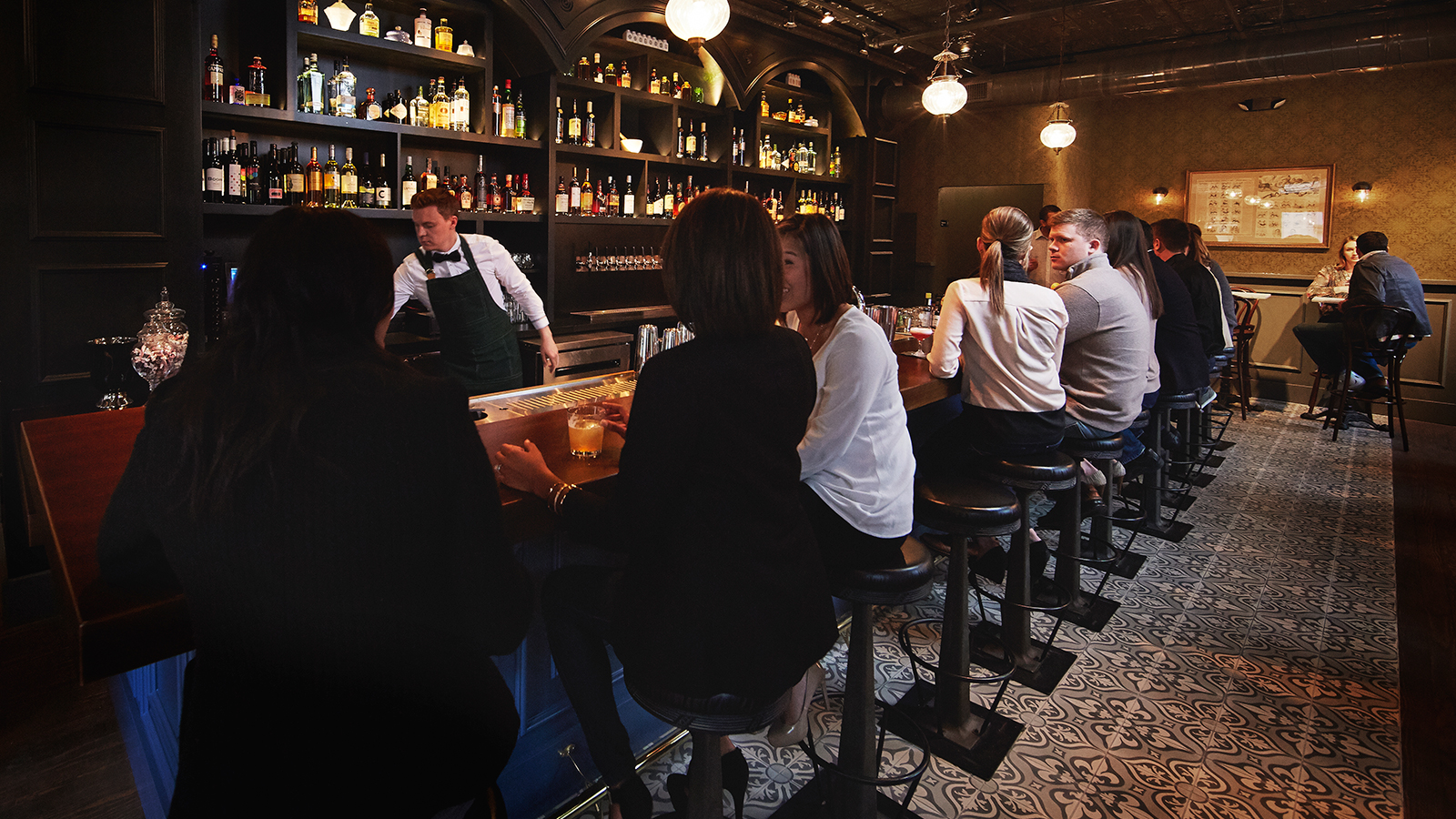 The best options are on the Ohio side of Cincinnati. The 21c Cincinnati is the sister hotel to the popular 21c Louisville, and it too is an art museum with rotating galleries, and has an excellent farm-to-fire restaurant, Metropole.

The Hilton Netherland Plaza opened in 1931 (it’s a National Historic Landmark) with French Art Deco architecture, Brazilian rosewood paneling, and German nickel silver light fixtures. The hotel bar has inventory from the old days: for $50, you can try Villa Club bottled in bond bourbon bottled in 1942, or Old Grand-Dad from the early 1940s.

The Hilton’s restaurant, Orchids at Palm Court, is led by one of the country’s top chefs: Todd Kelly, an American Culinary Federation Chef of the Year. Kelly uses truly local ingredients, from the Red Wattle ham (cured in-house for two years) to the honey made by bees on the Hilton’s roof. Orchids carries more than 40 bourbons and 20 scotches. Beware; the cocktails skew toward the stiff side.

If you enjoy a little action, the recently built JACK Cincinnati Casino offers lodging along with 2,000 slot machines, 85 table games, and a 31-table poker room. It’s a non-smoking casino.

On the Kentucky side of Cincinnati, the Comfort Suites Riverfront in Newport
and the Cincinnati Marriott at RiverCenter in Covington offer gorgeous views of the Cincinnati skyline.

Orchids At Palm Court in the Hilton Netherland; orchidsatpalmcourt.com