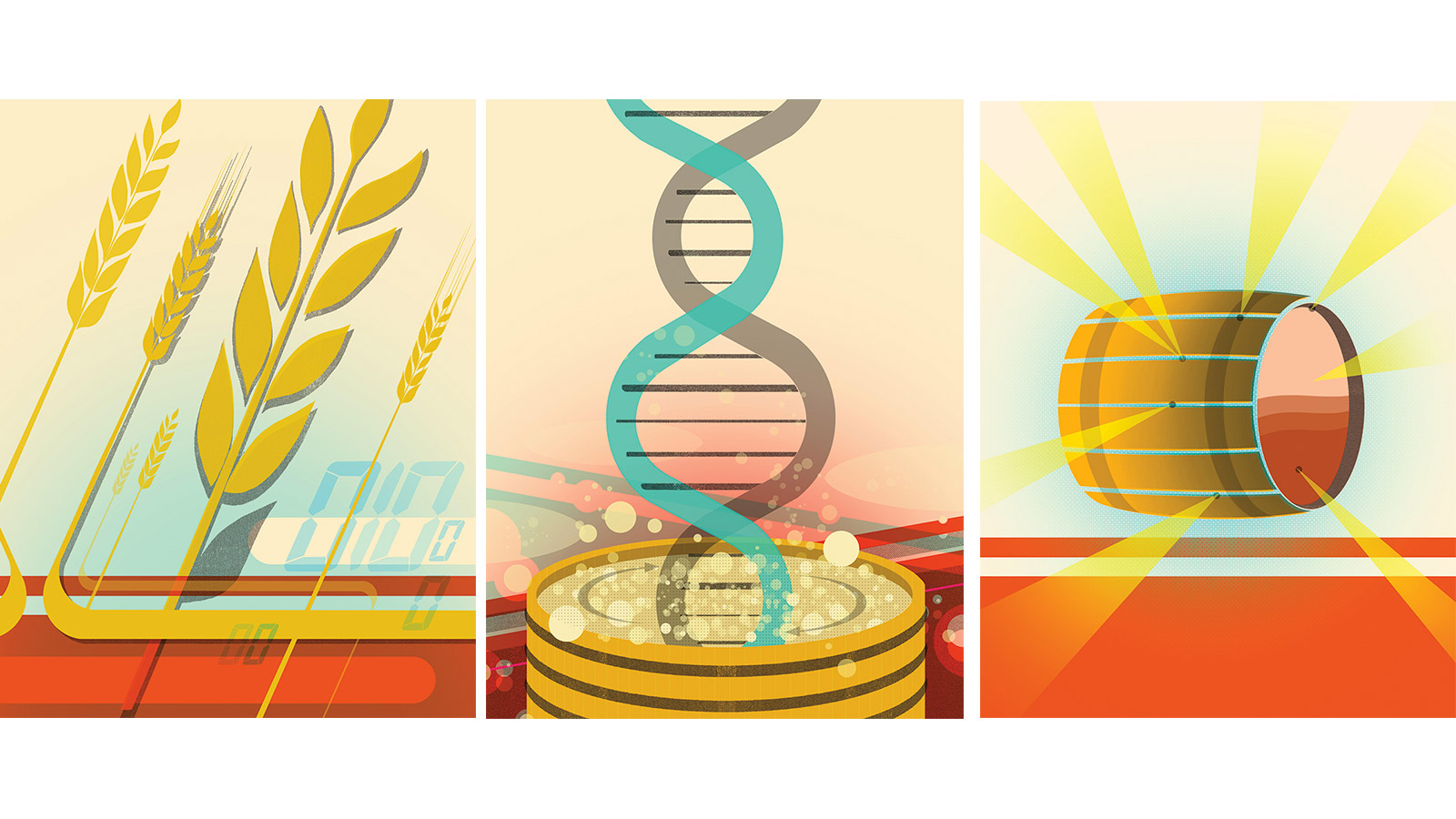 Scientific thinking has led to innovations in key aspects of the whisky-making process, including barley, yeast, and barrels. (Photo by Mark Allen Miller)

There are a multitude of variables throughout the whisky-making process, with technology constantly modernizing centuries old techniques. Advances in science are giving distillers even more to choose from, with barley, yeast, and barrels—key components in any production line—improving in ways that were previously unimaginable.

Sowing Seeds of the Future

“Barley is really the key ingredient behind the success of Scotch whisky,” says Dr. Bill Thomas, a cereal grain researcher at Scotland’s James Hutton Institute, a research center for land, crops, water, and the environment. “But barley needs to meet the challenges posed by climate change.” Hotter, drier summers could have a direct impact on the success of spring barley, the main malting crop for whisky. Thomas warns, “Scotland is not producing enough barley to meet the distillers’ needs.”

Selective breeding has improved the malt extract and alcohol yields from spring barley. Lower-yielding winter barley has not had the same focus, but is promising as well. Due to the fact that it’s harvested earlier, it can escape the adverse impact hot, dry summers can have on spring barley. Contributing to the advances, barley’s DNA has been sequenced, and it is 165 percent of the size of the human genome; enough characters to produce 11,000 large novels. Now, scientists in Scotland are trying to breed the qualities of the best spring barleys into new winter barleys to provide the breeding lines of the future and increase the amount of whisky that can be made from the same size field.

Beauty and the Yeast

Improving distiller’s yeast, Saccharomyces cerevisiae, by modifying it to produce higher alcohol yields and develop better tolerance to stress are worthy goals for the distiller. “Being a genetic engineer is a bit like being a yeast mechanic,” says Emily Stonehouse, a researcher for Mascoma, a technology company based in Lebanon, New Hampshire. “I work inside the yeast to try to give it new abilities to do things or to try to improve it for applications that we might want to use it for. We’re lucky because yeast has a great owner’s manual, as it’s well characterized at a genetic level.”

If successful, new yeast strains have the potential to deliver tastier whisky and generate novel flavors that yeasts do not naturally produce, although the use of genetically engineered organisms is controversial and often restricted by law. If you love banana, then yeast can be engineered to generate more isoamyl acetate, the chemical responsible for banana-like aromas. “By overexpressing two genes, we were able to get over 100-fold increase in isoamyl acetate production from that yeast,” says Stonehouse. “There’s really unlimited potential for what we can produce from yeast in the future if we use genetic engineering.”

Whisky evaporating from the casks, known as the angels’ share, is a costly concern for distillers. “We’ve been trying to understand more about liquid losses from casks,” says Mark Patterson, a research scientist with the Scotch Whisky Research Institute. Some losses are to be expected, but larger losses are usually the result of leakage. Patterson has been trialing a thermal imaging camera as a leak detector and has found it can differentiate surface temperatures caused by leaks to within a fraction of a degree. “Thermal imaging delivers a rapid, accurate assessment of the cask during maturation and it can pick up things that we can’t see by the naked eye,” says Patterson. The camera can detect cold spots on the cask surface caused by previously undetected evaporation. Defects in the cask ends, the seams between staves, or faults in the bung stave are often the culprits. The system can be tricked by dampness picked up on the surface when a cask is rolled, or from wet splashes after a cask is sampled, and it can only image the casks in front of it, making it challenging to use in a packed palletized warehouse. A useful early warning system, but unfortunately, there’s no X-ray vision button yet.