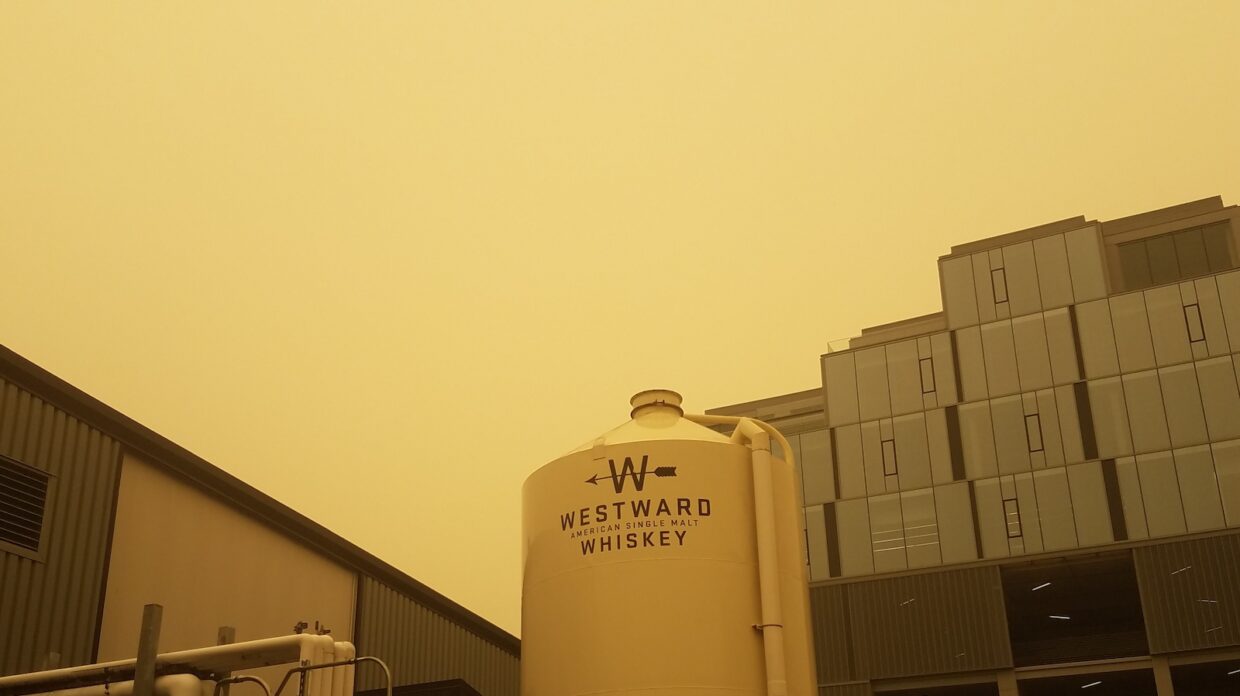 Wildfires raged near Westward Whiskey in Portland, Oregon, turning the sky an ominous yellow on Sept. 15, as captured in this image taken by the distillery's operations director, showing natural light with no filters. The previous week, the Riverside Fire burned within 12 miles of Westward’s warehouse, which houses the vast majority of the company’s barrels, in nearby Clackamas. (Photo by Andrew Tice)

As fast-moving fires incinerate swathes of the West Coast, killing dozens of people in multiple states and sending smoke across the U.S., whiskey makers too are feeling the heat. In a year that’s already left the spirits industry reeling from economic setbacks brought on by a global pandemic, scores of distillers now face yet another obstacle as they set out on what looks to be an even steeper road to recovery. Yet even as they battle a double whammy of COVID-19 and wildfires, some are tackling relief efforts to support local first responders and evacuated residents.

Westward is leading the charge in Oregon by donating $10 for every bottle sold in the state through the end of the month to American Red Cross wildfire relief efforts. As of Sept. 11, the distillery’s warehouse in Clackamas—which houses the vast majority of the company’s barrels—remained under a Level 2 evacuation warning. “The Riverside Fire got to within 12 miles of the site of our warehouse, so literally the entire future of the company was 12 miles from a fire that was at zero percent containment, and moving,” Westward founder and CEO Thomas Mooney tells Whisky Advocate. “That makes you think about things. You can’t pack up 4,500 barrels of whiskey and run away, so we held our breath.”

Fortunately, the fire spared the warehouse. “At this point, it seems we’re no longer in immediate danger from the fire itself, but Portland now has some of the worst air in the world,” Mooney says. As a result, the distillery suspended production and shut down the visitor center at its Portland distillery on Sept. 11. “We were hoping that by now [the fires] would have eased up, but they haven’t, so we’re keeping everybody home and offering to pay the shifts they’re not working,” he adds. 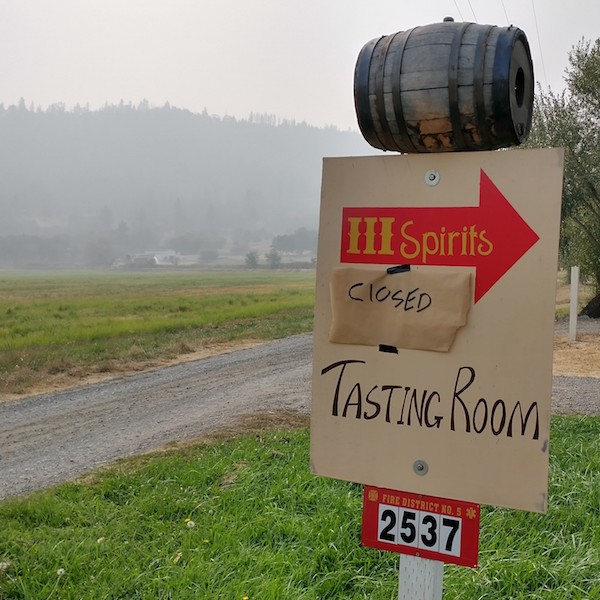 Smoke filled the air on Sept. 17 in Talent, Oregon, home to Pioneer Whisky (formerly III Spirits). The Almeda Fire decimated the small city, burning within a quarter mile of the distillery. (Photo by Todd Kemp)

Talent, Oregon-based Pioneer Whisky had an even closer call when the Almeda Fire all but annihilated the small city and burned within a quarter mile of the distillery. “With the pandemic and state orders to social distance, our tasting room hasn’t really been open at all this year,” says owner, brewer, and distiller Todd Kemp. “Now with the fires, the whole distillery is shut down, and what [bottles] we do sell through the state-run stores are taxed at 50%. It’s tough.” Because the two neighboring cities, Talent and Phoenix, “are pretty much 50% consumed by the fire, we’re not selling much of anything,” Kemp adds. “I’ve kind of just put the distillery into neutral, hoping that when things cool off, the fire’s under control, the city gets rebuilt, and COVID gets dealt with, maybe we can start selling again.” 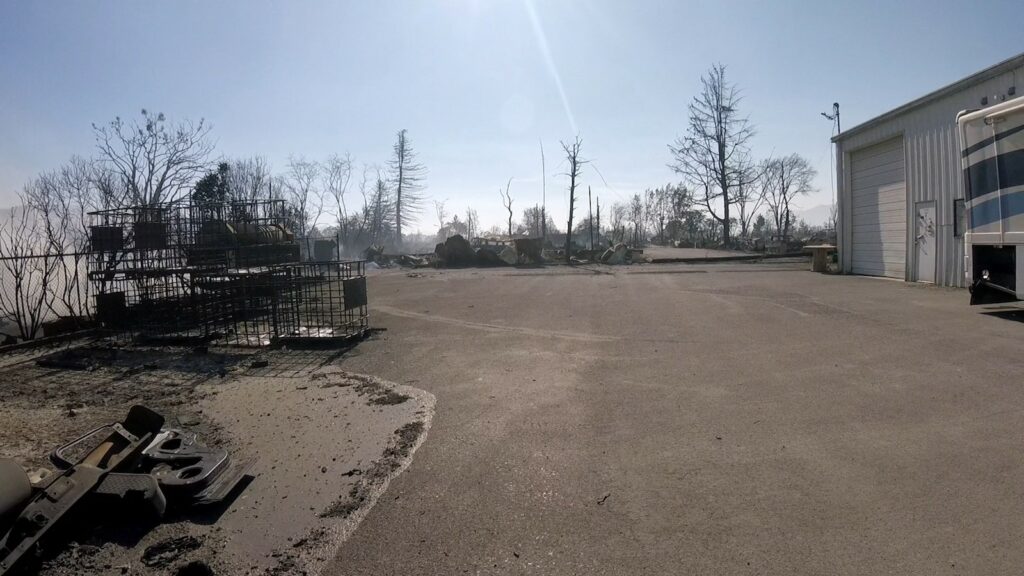 Jesse Gallagher—managing partner at Immortal Spirits and Distilling Co.—was stunned to find his Phoenix, Oregon distillery still standing when he approached on Sept. 9, the day after the Almeda Fire swept through Ashland, Talent, and Phoenix. (Photo by Jesse Gallagher)

Jesse Gallagher, managing partner at Immortal Spirits and Distilling Co., was shocked to find his Phoenix, Oregon distillery still standing when he walked in on Sept. 9, the day after the Almeda Fire swept from Ashland to Talent to Phoenix. “It was pretty miraculous,” Gallagher says. “There was a mobile home park right next to it, and several businesses in front of it, completely destroyed, so it’s a stroke of luck our building remained intact.” In a year when small distilleries have already faced epic challenges, “adding a wildfire on top has kind of been a slap in the face,” he adds. “But I count myself extra-fortunate the building survived, and when it reopens and we get power back on, we’ll pick up and continue production.”

Similarly, Steven Day—owner and head distiller at Dayton, Oregon’s Branch Point Distillery—maintains he’s optimistic that craft distillers will spearhead the effort to rebuild once the flames subside. “We had a fire that was about 10 miles away from us, and feel fortunate to have been spared direct damage to our facility,” Day says. “But the challenge is not being able to interact with our customers. COVID pushed us outside, and then, ironically, the fire and horrible air quality pushes us back inside, so we kind of have competing health worries and strategies to keep ourselves and our visitors safe.” 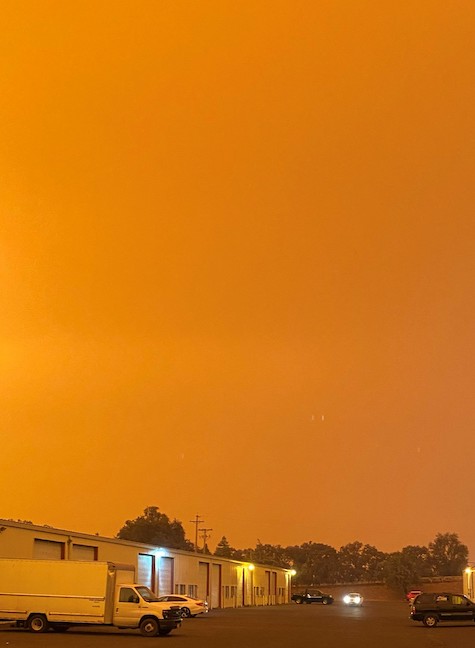 The sky above Charbay Distillery in Ukiah, California took on an apocalyptic orange hue on Sept. 8. In recent weeks, dozens of fires have ignited across the state, blanketing communities in smoky haze. (Photo courtesy of Charbay Distillery)

Wildfires also spared Charbay Distillery in California’s Mendocino County, but as they continue to rage, master distiller Marko Karakasevic knows mandatory evacuations could happen any day. “When employees are evacuated [from their homes], they can’t come to work, so that’s challenging for sure,” Karakasevic says. Regardless, if air quality becomes “super-bad,” he’ll send the crew home. In the meantime, a generator is being set up at the distillery in anticipation of power outages. “We’re doing everything we can to be prepared, but as far as our houses and countryside, it’s stressful,” he adds. “People live in the surrounding areas, and the Mendocino forest is up in flames.”

Update 9/29/2020: As wildfires continue to burn, Charbay’s winery and brandy distillery in St. Helena, California “is in jeopardy,” says Charbay operations director Jenni Karakasevic. “As of 7 p.m. yesterday, it was still standing. But with fires all around, and spot fires on the property, we don’t know if it made it through the night. Family [has been] evacuated safely.” Meanwhile, Charbay’s distillery in Ukiah “is safe.”

On Sept. 14, Heritage Distilling Co. shut down its production facility and tasting room in Eugene, Oregon so that employees could prepare for potential evacuation orders. The company also suspended outdoor tasting services at its Gig Harbor, Roslyn, and Seattle locations in Washington due to poor air quality. “We’re just trying to keep our employees healthy and minimize any risk of respiratory issues with the smoke in the air,” co-founder and CEO Justin Stiefel says. Still, “shutting down operations is a last resort, because that’s how you drive a significant amount of revenue.” Smoke precludes outdoor tasting, but switching to indoor service is easier said than done with COVID-related restrictions. “We were forced to move to outside service a month ago, so we moved aggressively to implement it,” Stiefel explains. “Now we’re forced to go back to indoor service, but at 50% capacity, while overhead, rent, insurance—those costs don’t go down. That’s a challenge.” 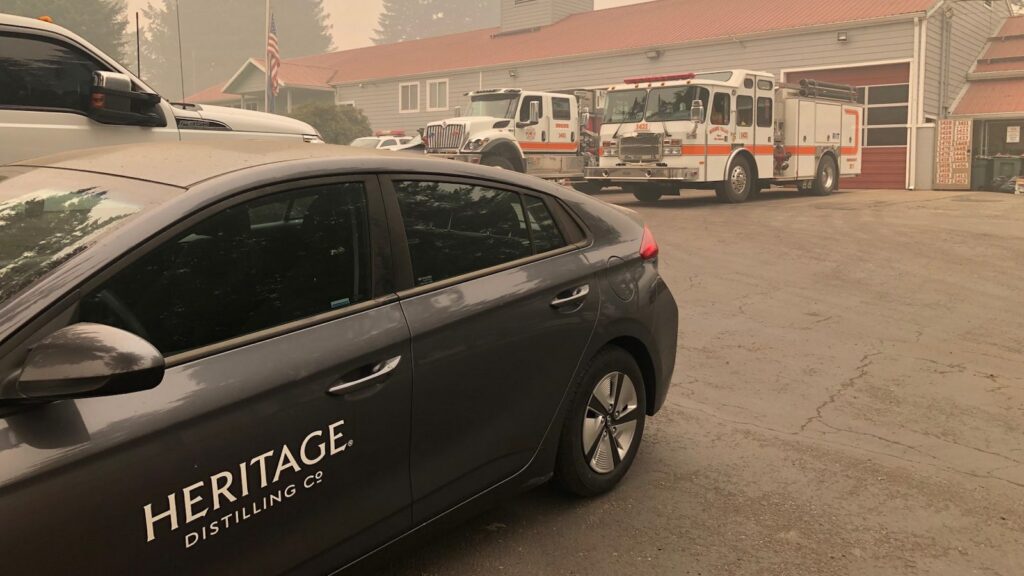 Despite the setbacks, Heritage’s Eugene staff “has rallied with other businesses to support the community, putting on food collection drives and bringing supplies to shelters” for evacuees, Stiefel says. Additionally, the company’s Oregon operations manager, Jessica Reeves, organized a GoFundMe campaign to provide meals for local firefighters. Charbay started Stand For Kindness, a fire relief nonprofit, in 2017, and is currently taking donations to help fire survivors and evacuees, Jenni Karakasevic says. And when Branch Point reopens, Day is planning to host a fundraiser to benefit relief efforts, as part of an event he was forced to postpone due to the fire.

Those are exactly the kinds of initiatives Mooney believes are necessary to kick-start recovery, “which is going to be massive, because the devastation is beyond words, and when the fire is gone and the smoke clears, that’s just the beginning,” he says. “We recognize what we’re doing is a drop in the bucket. But if everybody does everything they can—plus a little extra—then we can begin to address this.”