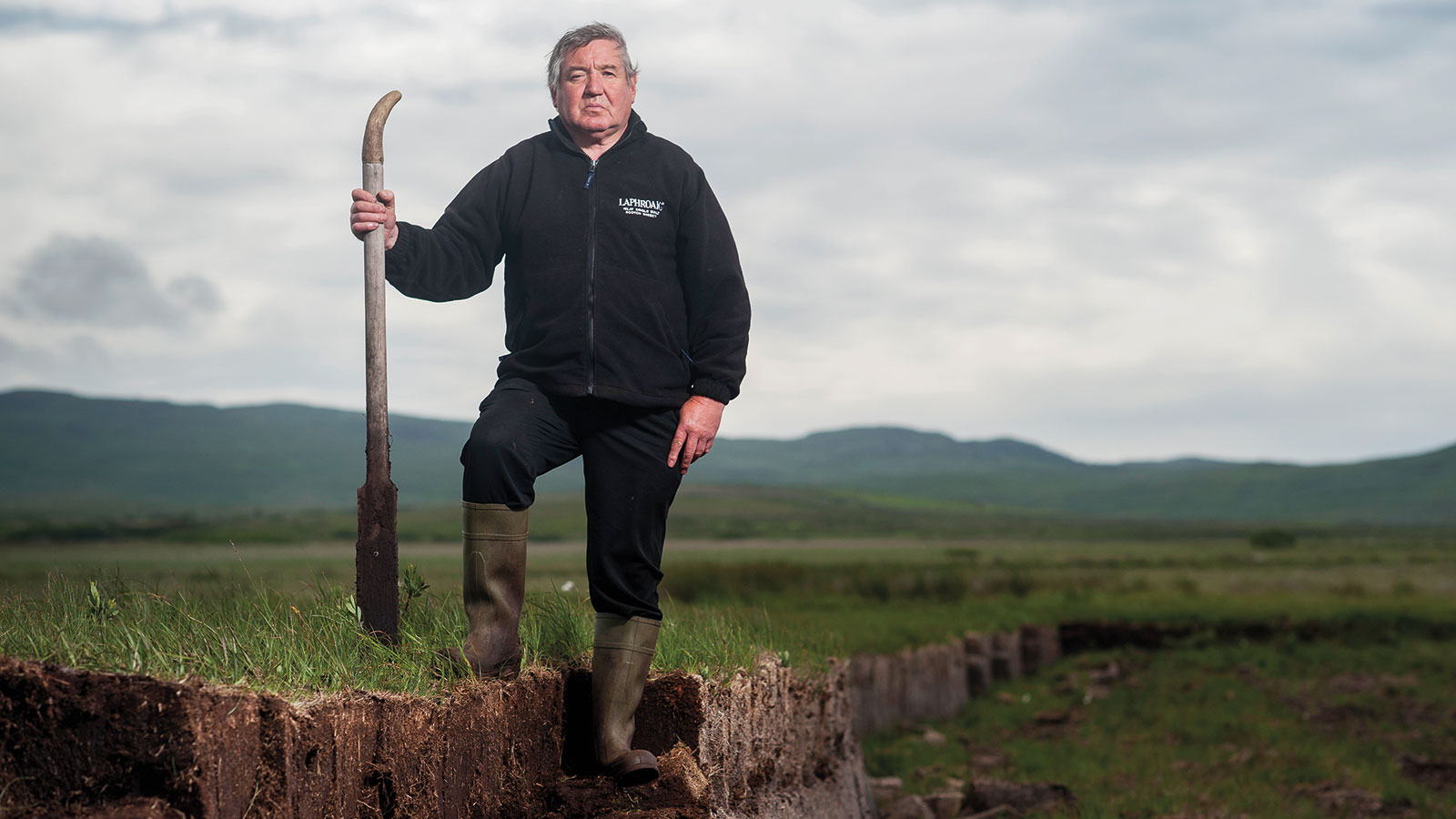 It was before 8 a.m., the wind was delivering a ruthless flogging, the rain was a nuisance, and the peat bog was squishy. Dougie pulled up in his Vauxhall Corsa, finished smoking a cigarette, and stepped out of the car. He didn’t flinch at the weather as he explained that the two 60-plus year old colossal tractors with caged wheels next to the car were the only means for maneuvering through the bog.

He’s been coming to this marshy plot of land for decades. His job is an ancient one: he excavates the peat that gives Islay whisky its distinctive flavor. Wielding his fal, a heavy spade, and moving along at a methodical pace, he hacks a brick-size piece of peat out of the earth, slashing it in expert fashion so its edges are smooth, and tosses it on a pile to be dried and carted off to nearby Laphroaig. Last year during peat season, which runs March to September, Dougie and four other workers cut 250 tons of peat like this. And that was a bad year. Too much rain kept them out of the bogs some days. “If you fall in one…you’ll see,” he said with a smirk.

Today, most peat is excavated with a machine that quick-dries the material by squeezing it. Traditionally though, peat was hand-cut, allowing it to stay moist inside as it dried. Think about baking with fresh fruit versus dried fruit and you immediately understand why that matters.

Dougie has broad shoulders and fingernails that appear permanently stained with earth. He’s been cutting peat since he was 11 years old. He worries about his local peat industry, and not just because of the threat of mechanization.

“We had to work. If you didn’t work, you didn’t survive,” he said. “It’s a lotta work and the boys here work hard doing it. Only thing is, it’s not easy getting locals to do it. Young ones get handed everything these days. Now there are two Romanians and a Lithuanian boy cutting. They came to the country, pay taxes, and work hard. If these boys weren’t here, there’d be no peat.”

Despite the grueling nature of the work, Dougie’s devotion never flags. “You work 8 a.m. to 4:30 p.m. in the summer and that’s enough. You have to pace yourself.” he said. “I’m tired, actually, but I still like coming out here. We got wee birds—skylarks. Nobody’s around you. It’s just peaceful. You haven’t got a care in the world. To be honest, I sail through life without a care in the world. You never know what’s gonna happen tomorrow. You put your own boots on in the morning, but you don’t know who’s gonna take ’em off.”