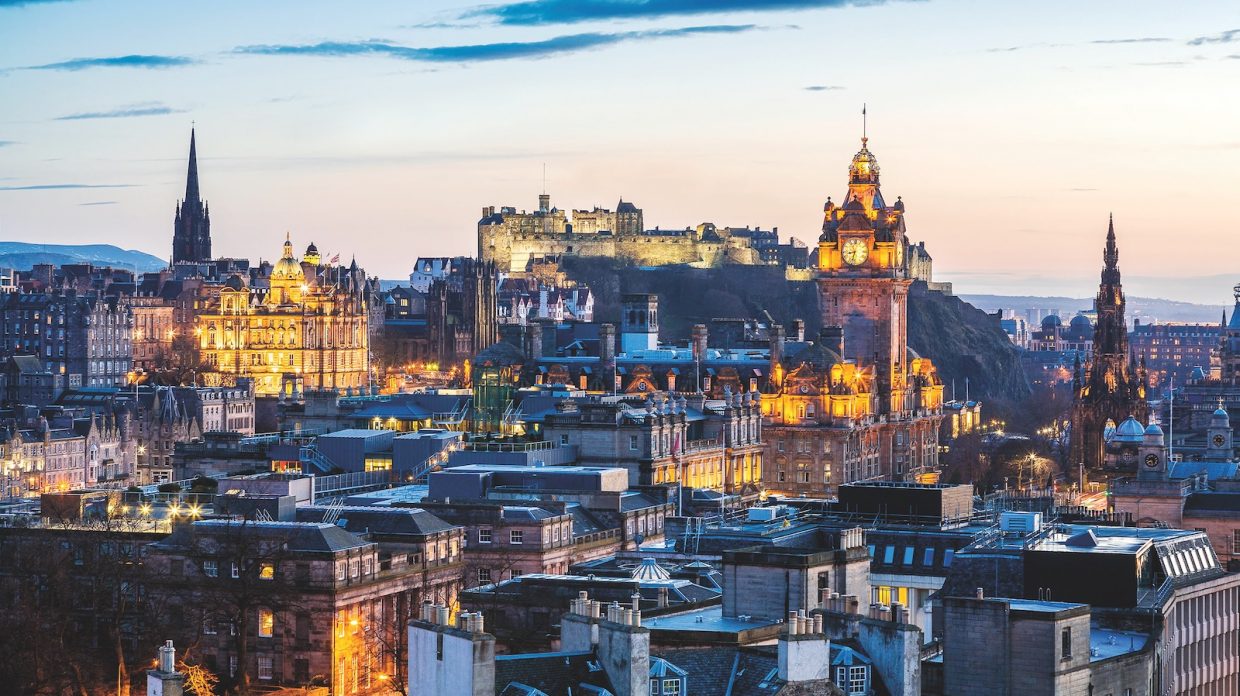 Edinburgh is conveniently located near many scotch heartlands, but also has its own riches.

In Edinburgh, whisky is like the dampness in the air—part of the experience, lingering in your clothes, seeping down to the bone. They don’t all drink whisky, but everyone here knows whisky. It’s a £5.5 billion industry, after all—the water-of-lifeblood of Scotland’s economy. So of course there’s no shortage of spendy tourist traps and whisky kitsch (tartan shot glasses, anyone?) for the casual visitor, but true whisky lovers need not look hard for the special and unique. If you want to go deep into Scotch whisky, this is where to begin.

“Edinburgh is the gateway to Scotland—mile marker zero on your journey,” says David Cutter, chairman of Diageo Scotland, which operates about a quarter of the country’s distilleries, including Lagavulin, Talisker, and Oban. By Christmas 2020, the company aims to have a rooftop bar atop a seven-story visitor center—the Johnnie Walker Experience—sure to be Scotland’s largest whisky tourist attraction when complete. Imbibers at the bar will enjoy a 360-degree view of the city from Edinburgh Castle to the Firth of Forth.

But there’s no need to wait when you can create your own whisky experience right now. Scotland’s capital is home to numerous expats who will attest to the city’s welcoming nature, whether you spend two hours or two weeks here. From Edinburgh, visitors embark to the scotch heartlands of Speyside, the Highlands, and the renascent Lowlands, where distilleries aplenty offer picturesque malting floors, cooperages, and idyllic glens. But before exploring, take time to enjoy the city’s riches.

Edinburgh has two beating hearts: one old, one new. Crammed higgledy-piggledy with pocket-sized pubs and hidden courtyards, the Old Town is up-and-down with stairs, hills, and narrow alleys called closes. Literally across the train tracks that run through Princes Street Gardens, the New Town is laid out in neatly planned lines and curves. Camilo Gómez of Once Upon A Whisky Tours leads visitors to some of the city’s best, often under-the-radar venues in both areas, telling the story of scotch—and letting us drink plenty of it—along the way. “My goal is to connect people, cultures, and whiskies from a different perspective,” he says. “My customers aren’t whisky snobs—they’re normal people who come to experience whisky and to learn things.”

The city is filled with lessons in whisky, both casual and more formal. The Scotch Whisky Experience offers an intimate masterclass that features a sensory test followed by a four-dram flight; skip the “Malt Disney” theme park-style barrel ride unless you have a taste for camp. Serious about acquiring whisky credentials? Consider a one- or two-day course at the Edinburgh Whisky Academy, which offers diplomas in single malt whisky and the art of whisky tasting. Several whisky shops host tutored tastings, including Cadenhead’s and Royal Mile Whiskies, whose manager, Mark Davidson, also leads the monthly Jolly Toper events at Kilderkin just down the road.

Among Edinburgh’s best-kept whisky secrets is the Water of Life Society at the University of Edinburgh. Yes, it’s a student-led whisky club, but meetings are open to the public and offer quite a deal: five drams for £15 for non-members. Weekly meetings are built upon a theme: whisky and chocolate, independent bottlers, or single-brand verticals, for instance. At night’s end, extra pours go for £2. And lest you think it strange to show up as a non-student, take it from this alumna: the more, the merrier. 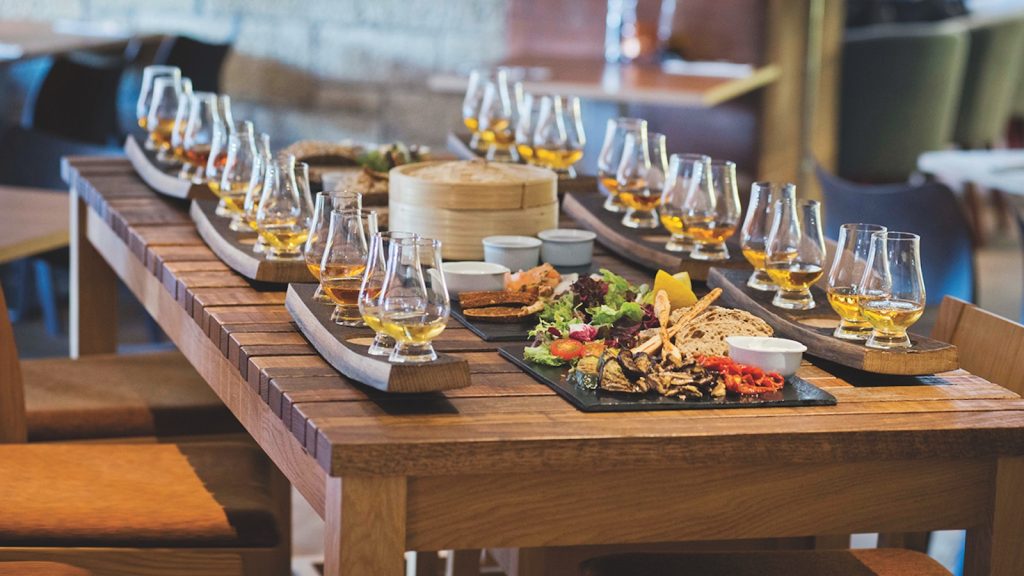 The Scotch Whisky Experience, which offers whisky masterclasses, is one of Edinburgh’s many educational excursions.

Down in Leith, cobblestone intersects with pavement, and apartment buildings, updated with sleek metal doors and windows, still brandish cranes and chains for hoisting cargo. Once the bustling hub of Scotland’s whisky exports, Leith is now dotted with upscale boutiques and Michelin-starred restaurants, though its gritty heritage remains visible everywhere, including at the members-only headquarters of the Scotch Malt Whisky Society, The Vaults. Non-members can visit the Society’s Kaleidoscope Bar and Dining Room on Queen Street in the New Town, which both are open to the public and offer hundreds of single-cask whiskies by the dram or bottle.

“Leith was the whisky district of Scotland—everything passed through here,” says Ian Stirling, co-founder and co-CEO with Paddy Fletcher of the Port of Leith Distillery, which broke ground on its nine-story distillery in 2019. When it opens in 2020, Port of Leith will feature a restaurant and bar overlooking the waterfront and just steps from the Royal Yacht Britannia, Edinburgh’s No.-2 tourist attraction (second only to the castle). There are even plans to construct a floating warehouse—a nod to the whisky casks that spent months on board ships, in transit from Scotland to ports abroad.

Although Port of Leith hoped to be the first single malt distillery in Edinburgh in nearly 100 years, the folks behind John Crabbie & Co. began production in 2018 in the Granton area and aims to open Bonnington Distillery in Leith—on the site of the former Haig Distillery—in early 2020. Established in 1801, the Crabbie’s lineup originally included ginger wine along with whisky, and now encompasses cider and gin as well. “There is no more Edinburgh whisky than Crabbie,” says managing director David Brown. “This is an Edinburgh story.”

The return of urban distilling isn’t limited to Leith. Just a ten-minute walk from the Royal Mile and a stone’s throw from the site of the city’s last single malt distillery (closed in 1925), Holyrood Distillery sits in the shadow of the royal park from which it takes its name, with the striking Salisbury Crags as a backdrop. Holyrood Distillery began production in the spring of 2019 and opened its visitor center that July, offering tours of its production process, which includes the use of specialty malts, a variety of yeasts, and an unusual spirit still that features a retort system. Head distiller Jack Mayo describes Holyrood’s five styles of whisky—fruity, floral, spicy, sweet, and smoky—which can be combined to create new, unique expressions. Edinburgh’s whisky culture may be old, but it’s not static.

Drop In for A Dram

On a quiet stretch of Queen Street, after the offices have closed, it’s easy to pass right by Bramble; in the twilight, the bouncer on the sidewalk looks like another punter pausing between pints. Follow the eerie violet lights down the narrow stairs to enter the subterranean space, the bass-thump of early-90s hip-hop reverberating in shadowy, low-ceilinged nooks. The discreet location heightens the delight of discovering a cocktail menu so imaginative, it hardly seems plausible on this strait-laced block of the New Town. Bramble’s cocktails span the diversity of spirits, especially whisky—from scotch to Japanese. Try the dry and herbal Gauntlet (made with Great King Street Artists’ Blend, just a few blocks from its namesake) or Whisky & Weet, a clarified Milk Punch made with Maker’s Mark, Loch Lomond’s single grain whisky, dates, vanilla, and Weetabix, one of the UK’s best-selling breakfast cereals.

Inventive cocktails are abundant in Edinburgh, but dramming in classic pubs and whisky bars remains rewarding for any whisky traveler. Even the smallest venues boast generous single malt menus; outside tourist tramping grounds, prices are fair and even cheap.

Down in the charming curve of the West Bow, step into the dim interior of the blue-fronted Bow Bar. Behold the long line of craft beer taps, and behind them, tightly packed shelves of whisky bottles, three or four deep. When I lived in Edinburgh, the Bow Bar was my local, where even a student’s budget stretched far, with whiskies like Kilkerran 12 year old, GlenDronach 15 year old, and a slew of independent bottlings costing well under £10. “Malt of the month” specials can be the best deals, especially if you get the bottle’s last pour—if it’s under 35 ml, they can’t legally sell it to you, but they might give it to you. (Tip your bartender well.) Even the pricier drams that literally can’t be tasted elsewhere offer good value, like Coleburn 35 year old for £50. If you visit in the daytime, first grab a chopped pork sandwich from Oink across the street and get the haggis and apple topping. (Trust me.) 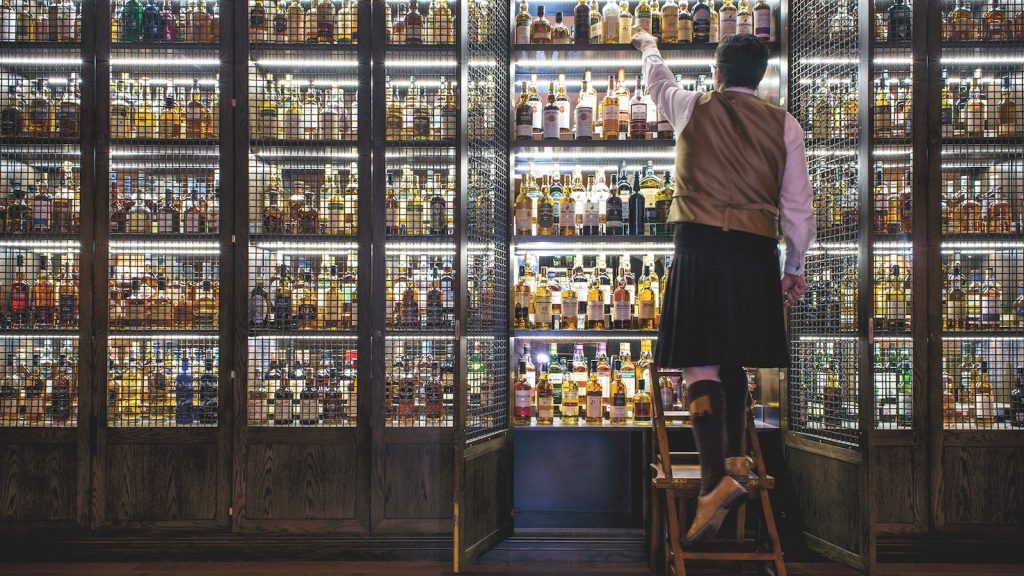 Scotch, the whisky-only bar at the Balmoral Hotel, boasts over 550 bottles.

In Edinburgh’s West End, the contemporary flair of Usquabae contrasts classics like the Bow Bar to great effect. Cozy into one of the curtained booths and dive into the hundreds of options. There’s 28 year old Convalmore, distilled in 1969 (£35), 1980s-era Rosebank 15 year old (£25), and long-out-of-date offerings from Bruichladdich, Ardbeg, and others. Standard bottlings from most distilleries will stretch your wallet far, like Springbank 10 year old and Highland Park 12 year old going for £4 each.

For a bespoke experience, sign up for a Whisky Journey at Scotch at the Balmoral Hotel; the knowledgeable, bekilted staff will design a custom flight of whiskies based on your tastes and preferences, organized around a theme like “100 Years of Whisky” (four whiskies whose ages add up to 100). The elegant space, all luxury and leather, will make you feel like a high roller no matter how much you spend. And with 550 bottles to choose from, even the most seasoned whisky lovers will find a surprise.

So when you get caught out in the damp drizzle of an Edinburgh day and need a whisky to warm you up, you’ll know just what to do.