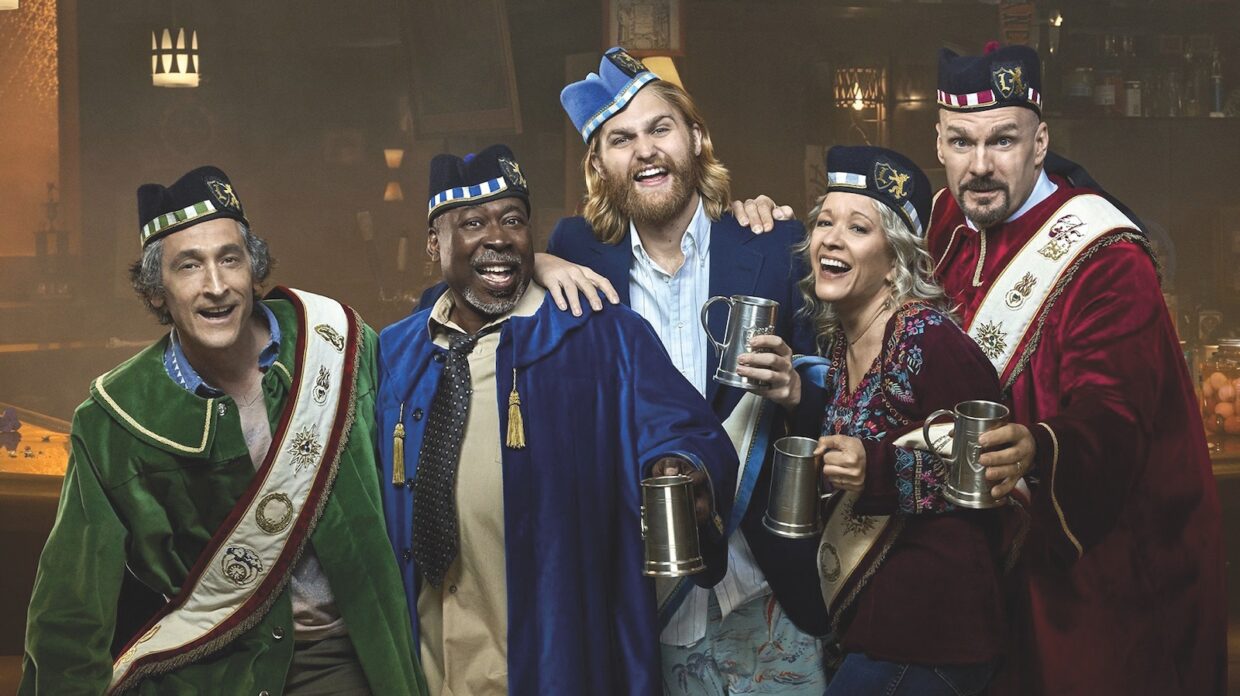 Eric Allen Kramer (far right) and fellow cast members laugh it up on "Lodge 49," which is streaming on Hulu.

The tavern on “Lodge 49” had all the makings of a great TV bar; a colorful cast of characters filled the Southern California space each week, brought together by a shared sense of community. The patrons of the fictional, members-only lodge, otherwise known as the Ancient and Benevolent Order of the Lynx, would convene for a cold pour and a good story, escaping the outside stress of dead-end work, faltering relationships, and uncertain fortunes.

“The first time we all walked into that space [on set], it was like that spot had existed for a hundred years,” says Eric Allan Kramer, who played Scott in the show’s two-season run on AMC. “I mean, just the detail and the weathering and it already felt like there were generations of Lynx before you who had sat at that bar, shared their stories, bought rounds of drinks.”

“Lodge 49” was cancelled in October of 2019, meaning it won’t have the longevity of “Cheers” or “It’s Always Sunny in Philadelphia,” but through the tavern and the people that inhabited it, it shares DNA with both. “It was one of those shows that just connected to who we are as a people, as a community, and just a society trying to figure itself out,” Kramer says of the show, whose full series is now streaming on Hulu. “It had its heart.”

It’s a particularly strange time to be chatting with Kramer about “Lodge 49,” bars, and whisky, as the country enters the early stages of self-isolation amid the COVID-19 outbreak. It’s a time when TV shows with bars are the closest we can safely come to experiencing them. “Lodge 49” made its mark examining the human condition, coping mechanisms, and existential quandaries, and it’s that quality that brought together its characters, fans, and cast, making it a particularly soothing watch in this moment.

“There is something about the human experience that requires being in the same space and just having that immediacy,” Kramer says. “All the stuff you sort of take for granted, you suddenly realize how important it is now, but it’s been taken away.” Kramer, who occasionally sang and played guitar on the show, cancelled plans to host a whisky-fueled jam session for his birthday in light of recent developments. “And suddenly you can’t really call your friends up and go for a happy-hour drink anymore.”

But that doesn’t mean he won’t enjoy a birthday whisky all the same. Kramer’s true appreciation for the spirit dates back to a guest spot he did on the 1993 show “Johnny Bago.” He and some fellow cast members, playing a trio of Irish brothers, had a bet that whoever messed up their lines the most had to bring in a bottle of booze on the final day of shooting. His friend Les Lannom lost the bet and brought a bottle of Powers Irish whiskey to the set. At the time, Kramer considered himself a bourbon guy.

“I went, ‘Wow, this is really nice. I’ve never had Irish whiskey before.’ He goes, ‘Well, if you like that, you’re going to love the single malts I have over at my place.’” Lannom, a member of the Scotch Malt Whisky Society, invited Kramer to a tasting event where he was introduced to Macallan. “As soon as I tasted that I was like, ‘I think I’ve just found my drink.’”

Kramer has been drinking single malt scotch ever since. “I quickly discovered that I like the peatier stuff,” he says, branching out to Laphroaig and Caol Ila before discovering Ardbeg Corryvreckan as his go-to. “I’ve got bottles of it now in my cabinet,” he says. “Ardbeg and I have been friends since L.A. went on lockdown.”

As others are currently self-isolating, there is a chance that they will discover “Lodge 49” for the first time, finding a surrogate for their own bar experiences. “It’s just a place that feels like home,” Kramer says of the Lodge’s tavern and all communal drinking spaces. “It’s a place that gives people just a real sense of comfort and coming together.”