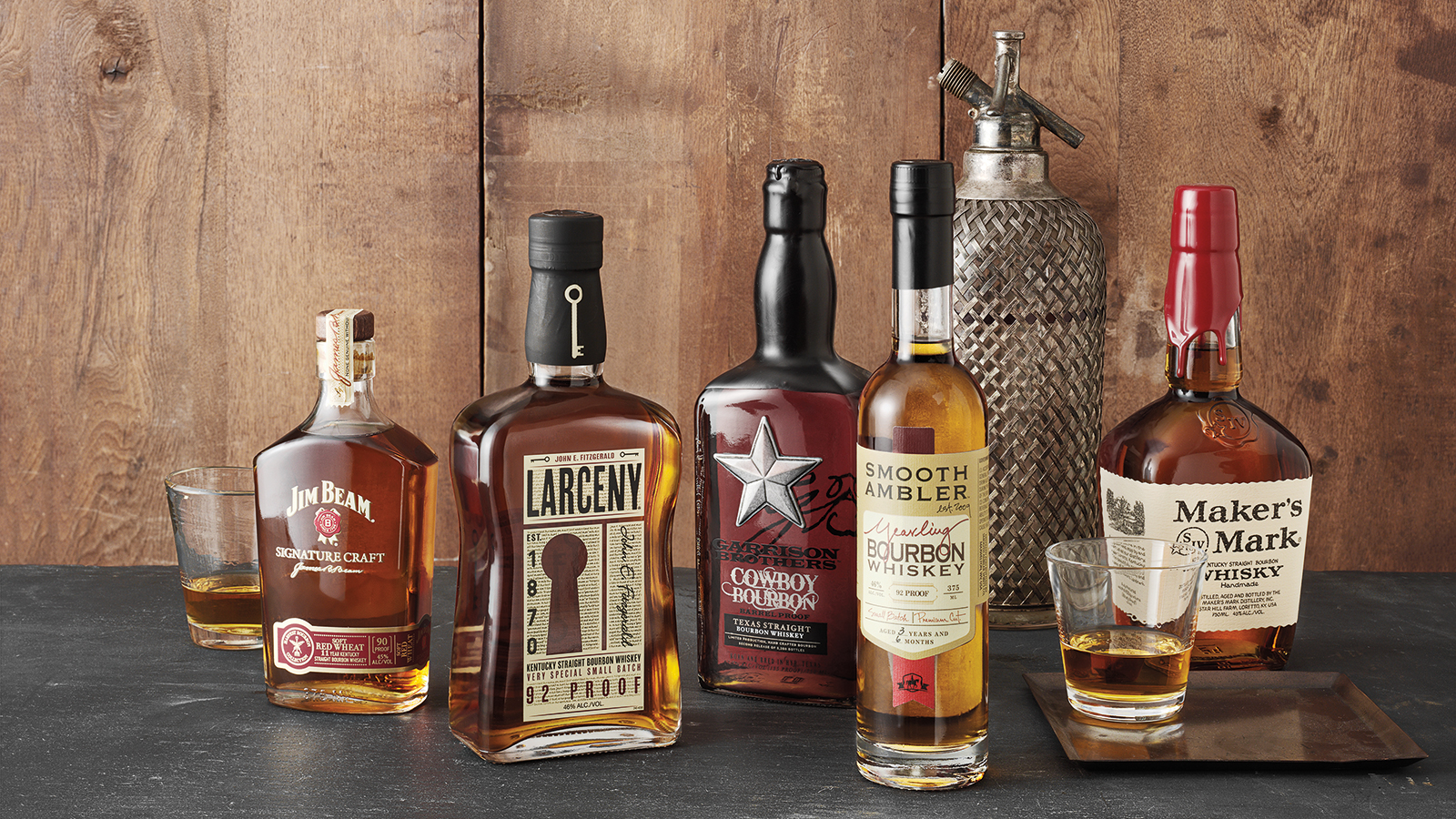 In the thick of summer, country-strong Buffalo Trace workers are sweating through their shirts, rolling newly filled barrels from a truck into a stone warehouse. The whiff of new make spirit in charred oak cuts through the subtle breeze, wafting rich bourbon aromas. It’s a typical hot and humid Kentucky day, but something’s wrong.

The Buffalo Trace Distillery’s barrelhead stencil markings look a little unusual. Instead of the smeared black ink upon wood grain, these barrelheads don a bright green.

This may seem like no big deal to a casual observer, but in the whiskey business, where every detail counts and small changes reverberate across decades, this green ink on the outside of a barrel is the mark of something profound on the inside: wheated bourbon. 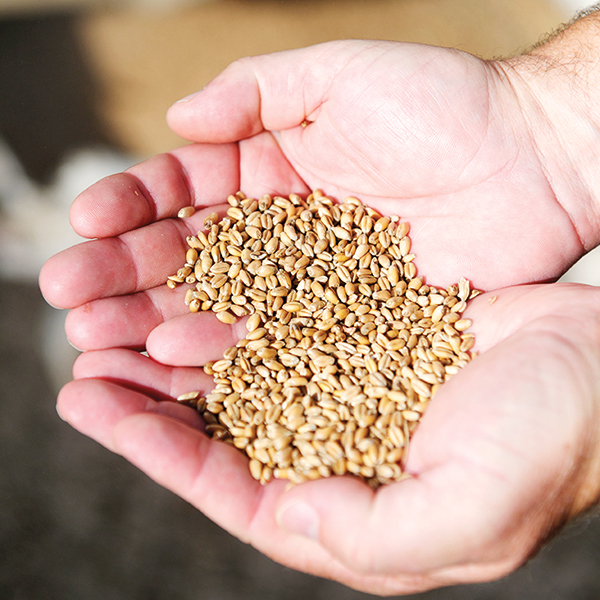 Maker’s Mark uses wheat for 16% of its mashbill. (Photo by Fred Minnick)

Made from at least 51 percent corn, bourbon relies on its secondary or flavor grains—typically rye—to create the distiller’s desired flavor profile.

When wheat replaces rye in a bourbon mashbill—often called a wheater—and ages upward of 8 years, the expected result is of long, rounded, and complex caramel notes. Wheated bourbons present French bakery aromas and certain flavors are consistently found in the genre, regardless of who distilled them. They’re often vanilla and caramel drenched with hints of citrus and delicate spice, but could be as accurately described for what they are not—wheated bourbons do not coat the palate with the same baking spice notes as their ryed counterparts. “I like to tell people it is pretty much identical to the difference between wheat bread and rye bread,” says Denny Potter, co-master distiller at Heaven Hill, makers of wheated bourbons Larceny and Old Fitzgerald. “Wheat will be softer and lighter and rye will be spicier and more robust.”

When tasting a high-rye bourbon, say Four Roses, next to Larceny or Maker’s Mark, both made with wheat, the contrast is clear. With Four Roses, spice jumps out of the glass and the predominant cinnamon is quite appealing, while the wheated styles show a much softer approach with little, if any, baking spices. The mouthfeels vary, some stick to the middle of the palate, others trickle down the jawline, but most of them, if properly made, give a starker caramel flavor than rye bourbons.

In pursuit of this rich flavor profile, every major Kentucky distiller except Four Roses and Wild Turkey is distilling wheated bourbon, and more than two dozen craft distillers are laying down wheated stocks.

Taste It: 8 Wheated Bourbons To Try

Many distillers are including wheat in emulation of wheater icon Pappy Van Winkle—perhaps the most coveted bourbon of the moment, wheated or otherwise—so their distributors and marketers can say, “this is a similar mashbill to Pappy.” But that type of thinking is relatively shortsighted and doesn’t truly pay homage to the drastic difference in taste that wheat brings to bourbon.

The taste begins with the genetic makeup. Wheat has a lower protein content than rye, says Tripp Stimson, master distiller for Kentucky Artisan Distillery, who is known in Kentucky as a fermentation expert. “Wheat and rye are two very different animals.  Rye is typically a tough grain, with higher protein levels and lower starch content than corn,” says Stimson, a former Brown-Forman production worker.

When Stimson refers to rye’s difficulty, he’s speaking of the grain’s foaming tendency. Much like a boiling pot of oatmeal foaming over, rye can quickly foam out of the fermenting tank. Since wheat doesn’t foam, it’s an easier grain to work with, says Buffalo Trace master distiller Harlen Wheatley. “[Wheat] isn’t thick like rye and is generally very clean, so very little waste,” Wheatley says.

But that doesn’t mean distilling with wheat is just a walk in the park. Maker’s Mark master distiller Greg Davis says mashing temperatures matter when creating wheated bourbon, suggesting wheated production requires effort to capture the grain’s nuance. “We are only after the starch portion and we go in [fermentation] around 160 degrees,” says Davis. “The higher the temperature, the more you can extract out of the grain. Some do pressure cook as high as 190 degrees, we do atmospheric cook. That’s not good or bad; it’s just different. Our focus is to get that starch. We’re not trying to get a bunch of proteins and every last starch molecule.”

After it’s mashed and fermented, Wheatley says Buffalo Trace distills its wheated bourbon at a lower still temperature, “to give it more flavor going into the barrel.”

Once distilled, most wheated bourbon producers cut the distillate with water to below 125 proof, the federal regulation proof maximum for bourbon whiskey entering new charred oak. The Weller and Van Winkle lines enter the barrel at 114 proof, while Maker’s Mark enters at 110 proof. The Heaven Hill wheaters are consistent with their other whiskeys at 125 proof. (In fact, Heaven Hill produces wheated bourbons the same as its rye bourbons.)

As for why the lower barrel-entry proof, nobody really seems to know. Perhaps Davis has the best answer, “because that’s how it was done before me.”

One thing we know for certain: consumers love the results. Wheated bourbon has escalated from a largely unknown term 25 years ago to a bourbon buzzword. But not that long ago, wheat was a rarity in bourbon. 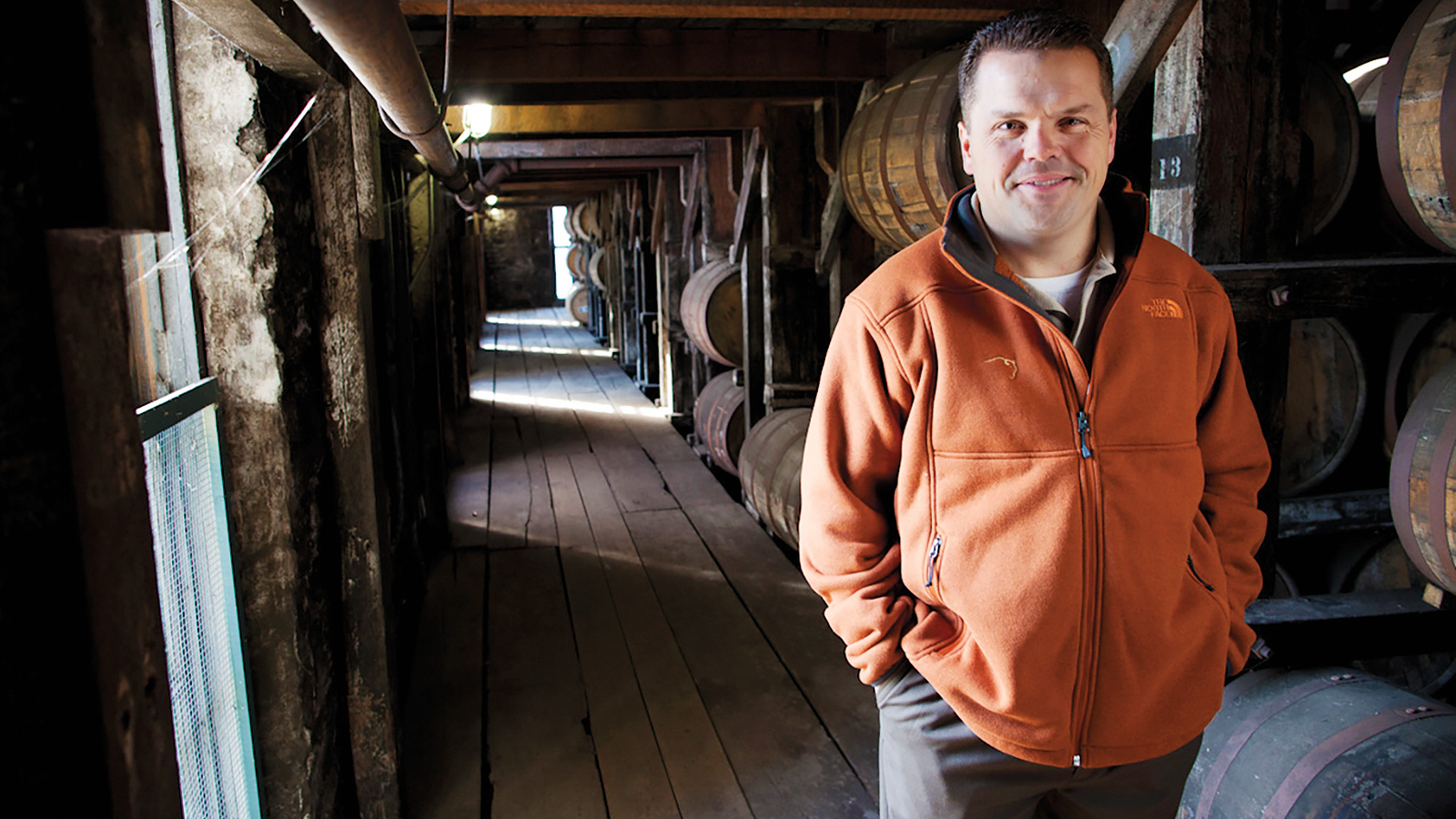 Made popular by the Stitzel-Weller Distillery and Maker’s Mark, wheated bourbons are in a category of their own as far as their legions of fans are concerned. But it may surprise these fans to know that 1800s-era distillers did not widely use wheat in their mashbills. In 1813, distiller Harrison Hall wrote that wheat was, “too high priced for the distiller, yet it yields more spirit than rye.”

That’s why the early bourbon whiskey mashbills looked something like this: 60% to 75% corn, 20% to 30% rye, and around 10% malted barley. With that said, wheat does appear in historical recipes. The earliest known sour mash recipe, circa 1818, called for “rye or wheat meal.” In bourbon’s earliest days, wheat was a replacement grain.

Of the major 1800s-era distillers, the best-known wheat recipe was from Charles Nelson’s distillery in Tennessee. His descendant of the same name says corn and wheat grew abundantly in the area, perhaps explaining why he touted wheat in his recipes.

Kentucky’s William Larue Weller is often heralded as the wheater’s father, despite the fact that Weller was not born until 1825, seven years after wheat was mentioned in the first known sour mash recipe, and later marketed his rectifying business, not his wheat-focused bourbons. Of course, that’s the same Weller whose name becomes a part of the distillery that really made wheat the focus—Stitzel-Weller, co-founded by none other than Julian “Pappy” Van Winkle Sr. “According to Pappy, the wheat recipe at Stitzel-Weller was something the Stitzel brothers had been experimenting with,” says bourbon historian Mike Veach, former archivist at the Stitzel-Weller Distillery and author of Kentucky Bourbon Whiskey: An American Heritage. “They thought wheat gave the product a better flavor at a younger age. They were the only ones using wheat after Prohibition. Before Prohibition, there were probably several, but it wasn’t necessarily the thing they were talking about.”

When it did come time to talk about it, Stitzel-Weller marketed its wheat heritage as a “whisper of wheat” in the 1960s and 1970s. “There’s only one sure way to tell if you like bourbon,” one 1970 ad began, “and that’s to try Old Fitzgerald. Why? Because we season it with just a ‘whisper of wheat,’ instead of the rye commonly used in other bourbons. And not just ordinary wheat, either, but soft winter wheat….”

Maker’s Mark used a similar message to really put wheated bourbon on the map. Long before locally-sourced food marketing was in vogue, Maker’s Mark centered its branding around red wax and local production, including “homegrown wheat to make it softer,” according to a 1966 advertisement. “It tastes expensive…and is.” To this day, Maker’s Mark purchases wheat from farmers in Marion County, where the distillery is located. 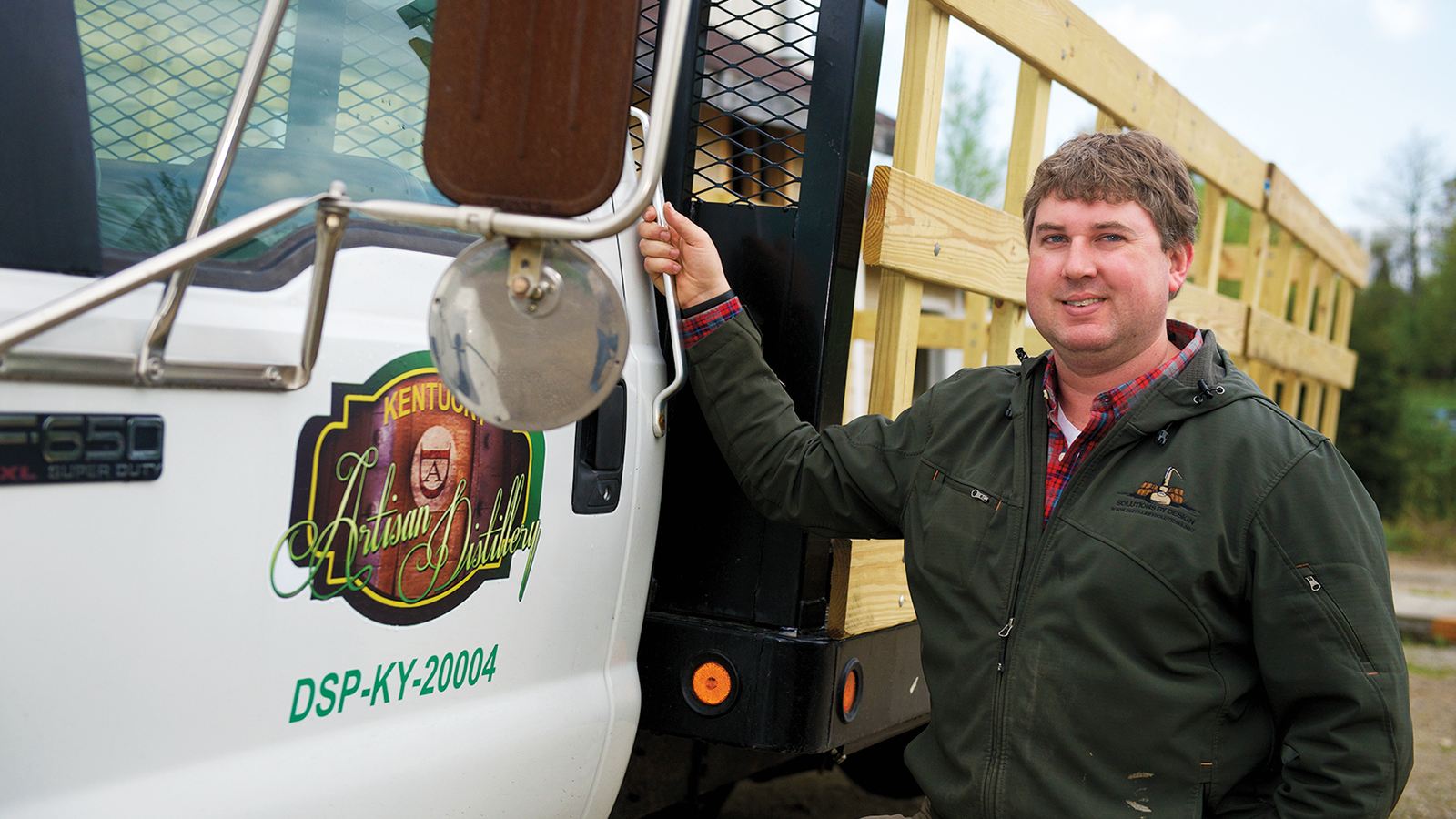 The flavor profile and local availability of wheat that enticed the early adopters are the same qualities that appeal to distillers today. In fact, Buffalo Trace, Heaven Hill, Maker’s Mark, Jim Beam, and MGP Ingredients purchase wheat from farms within 50 miles of their distilleries, while their rye comes from Canada, the Dakotas, Wyoming, and Europe. Since the corn also comes from local farms, that makes Kentucky wheated bourbons more authentically local, and the farmers have come to depend on bourbon distillers. Springfield, Ky., wheat farmer Pat Clements, president of the Kentucky Small Grain Growers Association, says distillers pay a premium for wheat, and the wheat farming community would be devastated if bourbon distillers significantly lowered their demand.

That’s not happening anytime soon. If anything, wheat’s impact on bourbon is just beginning. Some distillers, like the new Spirits of French Lick, are actually growing wheat. Among craft distillers, the trend is to include wheat in a four-grain recipe or stow their wheated bourbon stocks. The contemporary thought is that young wheated bourbons don’t taste as good. “Rye grain, either in rye whiskey or in ryed bourbon, masks youth. Wheated bourbon needs more time in the barrel to have a comparable ‘mature’ taste,” says John Little, owner of Smooth Ambler Spirits in West Virginia.

In Kentucky, the wheated stocks are rising. Willett Distillery in Bardstown is currently dedicating about 50 percent of its production time to distilling its wheated bourbon recipe of 65% corn, 20% wheat, and 15% malt, but doesn’t know when it will be ready for bottling. Maker’s Mark, which only makes wheated bourbon, is the largest distiller of a wheated recipe and continues to expand, recently adding its third still and an evaporator. Heaven Hill and Buffalo Trace can’t churn out wheaters fast enough, while Buffalo Trace’s sister distillery, Barton 1792, is expected to release another 1792 Sweet Wheat limited edition, and non-distiller producers are purchasing wheated bourbon stocks from Lawrenceburg, Indiana’s MGP Ingredients.

If you’re a wheated bourbon lover, the future is bright. With this kind of activity, wheaters could one day have their own aisle in a liquor store, previously an improbability considering, once upon a time, nobody used wheat.

But, hey, stranger things have happened. At one distillery, they started painting the wheated barrels green.