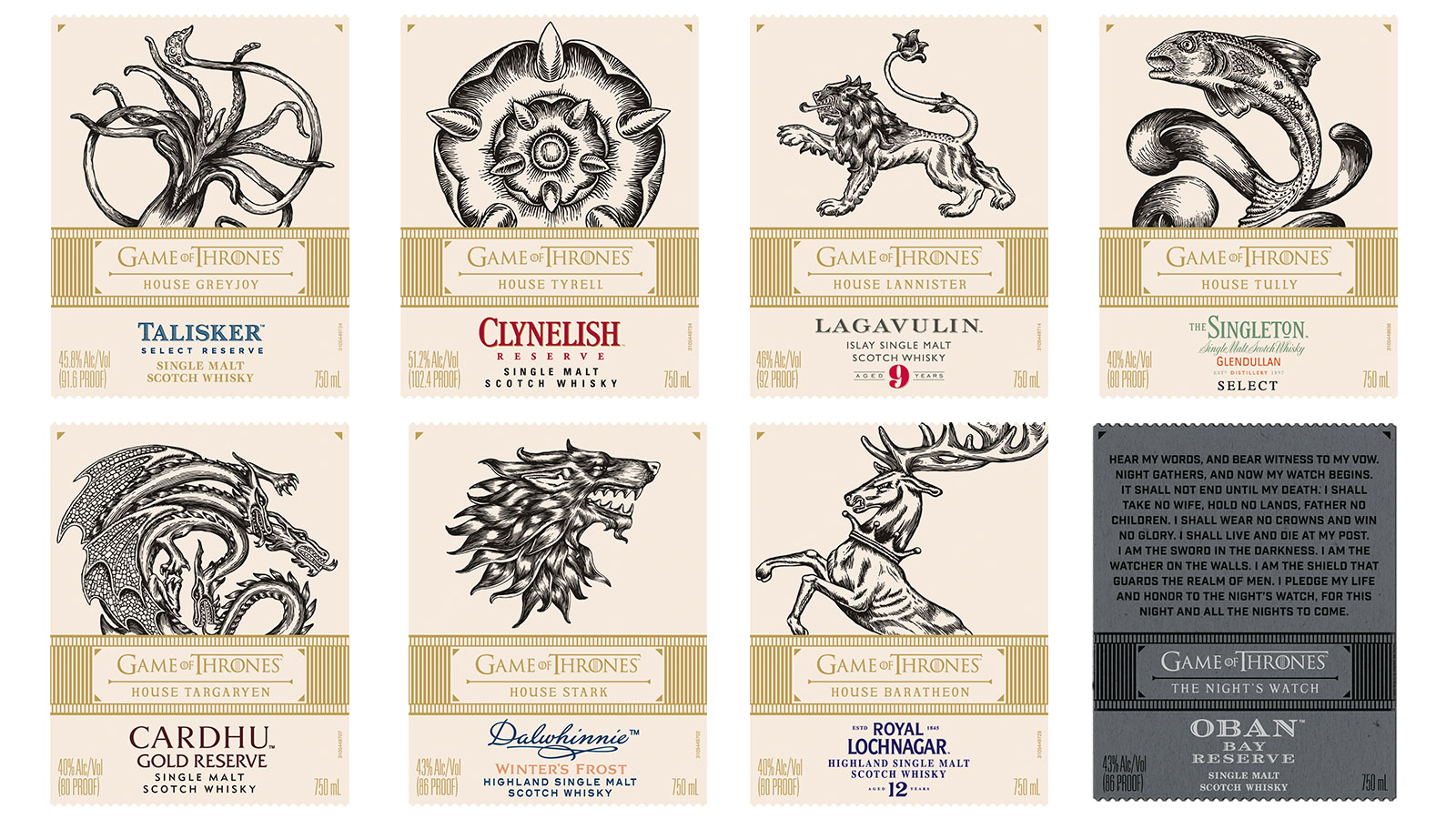 Update 10/1/18: Diageo has released more details, including pricing, on all eight single malts and Johnnie Walker White Walker. See below.

It only took seven years, but Game of Thrones fans will finally be able to pair the perfect scotch with each action-packed episode of the hit series when its eighth and final season premieres in 2019. Drinks conglomerate Diageo has partnered with HBO to release eight special single malts this winter—each from a different distillery and named for a different house or group from the fictional land of Westeros.

After initially bringing you information about the whiskies based on the approved labels from the Alcohol and Tobacco Tax and Trade Bureau (TTB), Whisky Advocate now has additional details from Diageo. The company’s press release states that their “unparalled diverse range of distilleries in Scotland, much like in Westeros, each have their own unique characteristics and produce a distinctive whisky representative of its local terroir.” Apparently, Diageo put thought into the match-ups between the whiskies and the houses of Westeros (although fans of both GOT and these distilleries might not agree with the final results).

Clynelish Reserve—51.2% ABV, $60: A non-age-statement Highlands single malt, representing House Tyrell and displaying its rose sigil. Clynelish is located among green pastures and rolling hills, similar to the lush, fertile area of Highgarden, the home of the Tyrells. This whisky is also, apparently, light and floral but, like the family, “not to be underestimated.”

Dalwhinnie Winter’s Frost—43% ABV, $40: A non-age-statement single malt from the Highlands, representing House Stark and featuring a fearsome direwolf on the label. Diageo explains that this whisky from Dalwhinnie, located at one of the highest and coldest distillery sites in Scotland, is shaped by extreme conditions, just as the Starks’ qualities of resilience and strength are shaped by their home of Winterfell in the North.

Lagavulin 9 year old—46% ABV, $65: An Islay single malt, representing House Lannister and showcasing its lion sigil. This whisky was chosen to match the Lannisters as its creation reflects the same cunning and tenacity for which the family is known—and its rich flavor is also, apparently, a reflection of their riches.

Oban Bay Reserve—43% ABV, $63: A non-age-statement Highlands single malt, featuring an appropriately dark and simple label with the vow of the Night’s Watch. Just as The Wall separates Westeros from the wild lands beyond, Oban Distillery sits on the border between Scotland’s western islands and highlands.

Royal Lochnagar 12 year old—40% ABV, $65: Hailing from the Highlands and representing House Baratheon, the label shows a rampant stag with a crown around its neck. This pairing is a no-brainer: House Baratheon is the ruling family on the Iron Throne, and Royal Lochnagar is one of Scotland’s few distilleries with a royal warrant, bestowed by Queen Victoria in 1848.

The Singleton of Glendullan Select—40% ABV, $30: A non-age-statement Speyside single malt, representing House Tully and showcasing its leaping fish sigil. Diageo notes that Singleton makes a good match for the Tullys, the lords of the riverlands, as the distillery is located on the banks of the River Fiddich and once used a water wheel to power its operations. 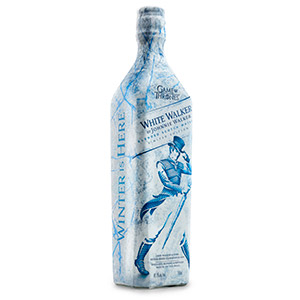 Talisker Select Reserve—45.8% ABV, $45: A non-age-statement single malt from the Isle of Skye, representing House Greyjoy and featuring its kraken. This whisky was chosen to pair with the Lords of the Iron Islands because of its maritime character and smokiness, as well as the distillery’s location on the rugged shores of Skye.

In addition to these eight single malts, Diageo plans to release a special edition of Johnnie Walker that hails GOT’s legendary White Walkers.

Johnnie Walker White Walker—41.7% ABV, $36: Blended by whisky specialist George Harper, this blend is designed to be served directly from the freezer. “Freeze for an unexpected icy reveal,” the label commands, also noting that the whisky includes Cardhu and Clynelish malts, and is “distilled, bottled, and blended North of the Wall.” When frozen, the bottle’s temperature-sensitive thermochromic ink displays the legend “Winter is Here.”

Are you hoping to get your hands on a bottle of GOT-inspired whisky for your next viewing party? Johnnie Walker White Walker will be widely available starting in October, while the single malts will be hitting shelves in November.