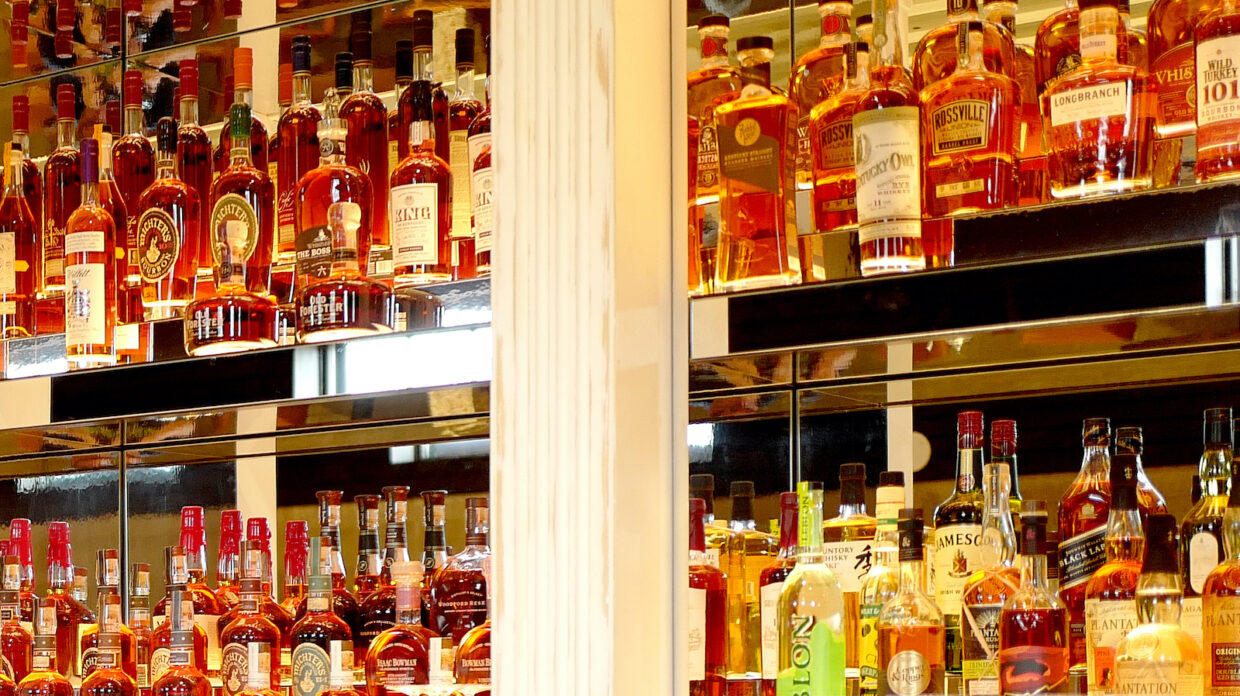 The whiskey selection at Hermitage Farm is deep, offering guests a wide range of choices for custom tastings. (Photo by Adam Robb)

“When distillers sold their bourbon in New Orleans, they’d want to avoid pirates stealing their money on the way home,” says Steve Wilson, recounting a highly plausible legend behind the Bluegrass State’s twin legacies. “So they’d ride back to Kentucky on the fastest horse they could buy.” We’re strolling the grounds of Hermitage Farm, owned by Steve and his wife, Laura Lee Brown—700 acres in the elite enclave of Goshen, Kentucky. Outside of a day at the races, Kentucky offers limited opportunities to experience both thoroughbreds and bourbon in one place, but Wilson and Brown aim to change that with Hermitage Farm, where visitors can get up close and personal with champion racehorses before sitting down to sip some of the state’s best whiskeys.

Ideal for day-trippers from Louisville, a 30-minute drive away, Hermitage Farm—which opens to the public in phases beginning May 22—offers no shortage of custom experiences. At its heart, it’s still a working broodmare farm. “Basically we’re a thoroughbred nursery,” Wilson says. “We raise foals for a year and sell them at the Keeneland sales.” Wilson and Brown have also added world-class whiskey and food to the site’s amenities. Expect group walking tours that end with gourmet box lunches and bourbon tastings, afternoon tea inspired by Queen Elizabeth’s 1986 visit to the farm—a plot point in season 3 of “The Crown,” though the show changed the timeline—and elevated country fare at restaurant and event space Barn8, where chef Alison Settle uses ingredients freshly picked from the on-site greenhouse. For those with grander equine inclinations, it will be possible to register for professional carriage driving lessons. You can even book your wedding at Hermitage Farm’s main house, previously occupied by two former Churchill Downs chairmen, before blissfully departing in the original horse-drawn carriage from “Gone With the Wind”—all capped off with a toast of top-tier bourbon such as Kentucky Owl, the Buffalo Trace Antique Collection, and a whole host of single-barrel picks. 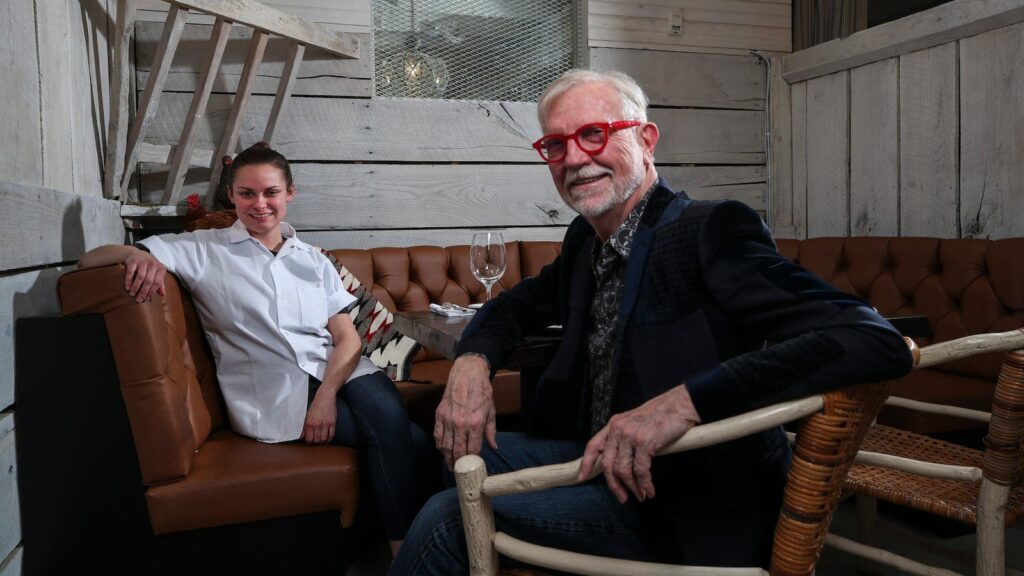 Hermitage Farm has been a passion project for Wilson and Brown for more than a decade. In 2006, the couple opened the 21C Museum Hotel in Louisville, which has become one of the city’s top accommodations and spawned 10 additional locations across the country. They acquired the farm a few years later, as a means for marrying their individual passions: Wilson is a retired world champion carriage horse driver, whose own Lipizzaner stallions are boarded on-site, while the Brown in Laura Lee’s name comes from Brown-Forman—she’s an heiress to the bourbon empire. However, visitors shouldn’t expect Hermitage Farm to limit its bourbon selection to Brown-Forman brands like Woodford Reserve and Old Forester.

“We plan to have 15 to 20 single-barrel selects available to guests when they visit,” says bourbon steward Adam Walpole, who educates visitors about the shared history of Kentucky’s bourbon and horse-racing industries as they cross a mashbill-inspired landscape planted with corn, rye, and barley. The farm’s extensive bourbon selection is available through set tastings as well as a la carte. The $25 Bourbon Tasting Experience includes five half-ounce pours from a rotation of bottles like Elijah Craig Small Batch, Old Forester Straight rye, and Wild Turkey Rare Breed. A customized VIP Bourbon Tasting Experience, meanwhile, allows guests to choose from more than 50 rare whiskeys also available on the restaurant’s bar menu, including a flight of Old Forester Birthday bourbons, as well as private selections of Old Weller Antique and a 5 year old Willett Family Estate, both originally picked for the 21C hotel.

Though distillery visitor centers across Kentucky are currently shuttered, Wilson hopes Hermitage Farm will be able to offer bourbon experiences soon. “We are looking into offering by appointment tastings for groups of 10 or less,” he says. Even without the opportunity to host group tastings at the moment, Hermitage Farm’s gift shops offer a number of private-barrel selections; current picks include Old Forester ($50), Woodford Reserve Double Oaked ($63), and Weller Full Proof ($100), with New Riff bourbon ($50), Knob Creek bourbon and rye (both $55), Maker’s Mark Private Select ($80), and Jefferson’s Ocean ($95) forthcoming. Releases from Wild Turkey, Four Roses, Heaven Hill, Buffalo Trace, Wilderness Trail, and Jim Beam are in the pipeline, while even more exclusive barrel picks will be packaged with special events at Barn8.

“I want to have 15 picks in stock at all time,” Walpole adds. “Some will go faster than others, like a Weller store pick you can only get with a dinner at the restaurant.” In the future, Barn8 will be able to offer bourbon aged on its premises too. Its upstairs Hayloft event space is lined with 100 barrels from distilleries all over Kentucky. They’re empty, but Hermitage Farm plans to begin aging whiskey, sourced from the state’s distilleries, on-site soon; details are still being worked out.

Most exciting of all, the shops showcase dozens of antique whiskeys for sale, like a 1942 Old Hermitage rye and a 1980 Early Times bourbon, thanks to Kentucky’s 2018 “Vintage Spirits Law” that allows the farm to buy and resell bottles from private collectors. There are also bourbon artifacts for purchase, like a collection of antique sterling Julep cups crafted by early American silversmith Asa Blanchard. 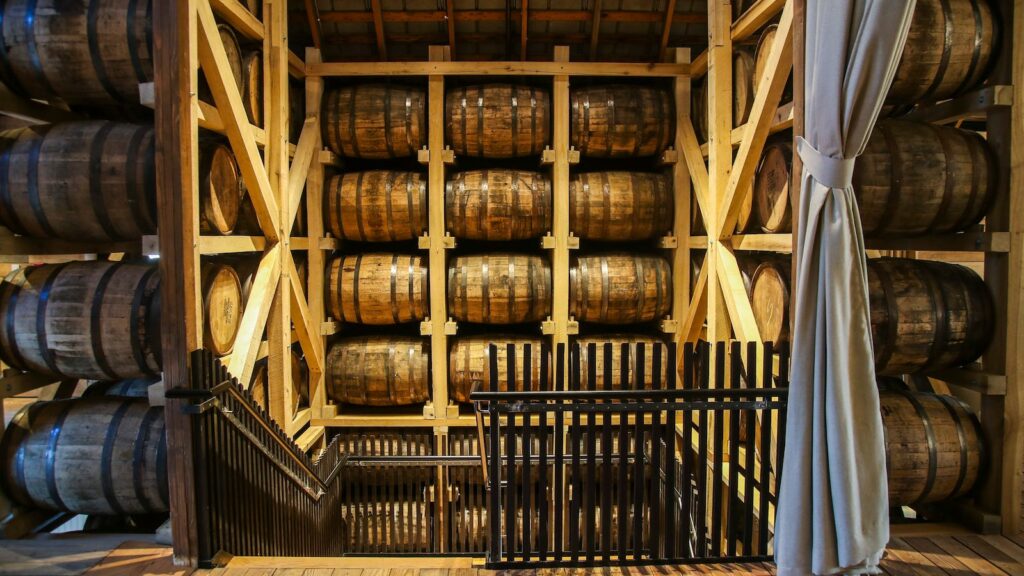 The Hayloft at Barn8 is lined with barrels—all empty, unfortunately. Hermitage Farm does plan to age whiskey on-site in the near future, however. (Photo by Matt Stone)

And of course, there’s plenty of world-class food to complement all that bourbon. Tastings are accompanied by a box lunch from the restaurant kitchen: Think classic Kentucky sandwiches like braunschweiger (smoked liverwurst) and barbecued lamb—dishes that only improve as the bread soaks in the flavor. The tastings are held in Barn8’s upstairs event space, while downstairs Settle’s crew prepares for dinner, breaking down animals from sister property Woodland Farm for dishes like bison schnitzel in port gravy with kohlrabi kraut and herb slaw. Herbs come from an on-site greenhouse almost as large as the restaurant itself that also supplies the bar with produce, like calamondin oranges, for syrups and garnishes.

On the cusp of opening just before Kentucky imposed lockdown, Barn8 can operate at 33% capacity currently, and is taking reservations for dinner starting May 22. Its sprawling size—which includes stables converted into booths—allows diners to be safely spaced apart. More guests can be accommodated at outside tables, and can even take their meals in picnic baskets and set a blanket down where they please. “Guests can also walk the grounds and enjoy the property without a reservation, and if they decide to stay for dinner, they need only call Barn8, and we will make accommodations for them,” Wilson adds.

Hermitage Farm’s bourbon tastings and other experiences, including a creekside art walk, will be phased in as Kentucky’s reopening progresses. “Right now we’ve got a pretty motley crew operating across the farm,” Wilson says. “I’ve kept the staff of Barn8 busy gardening and mending fences.” The horses continue to be exercised and trained. And the bourbon is just waiting to fill some glasses.