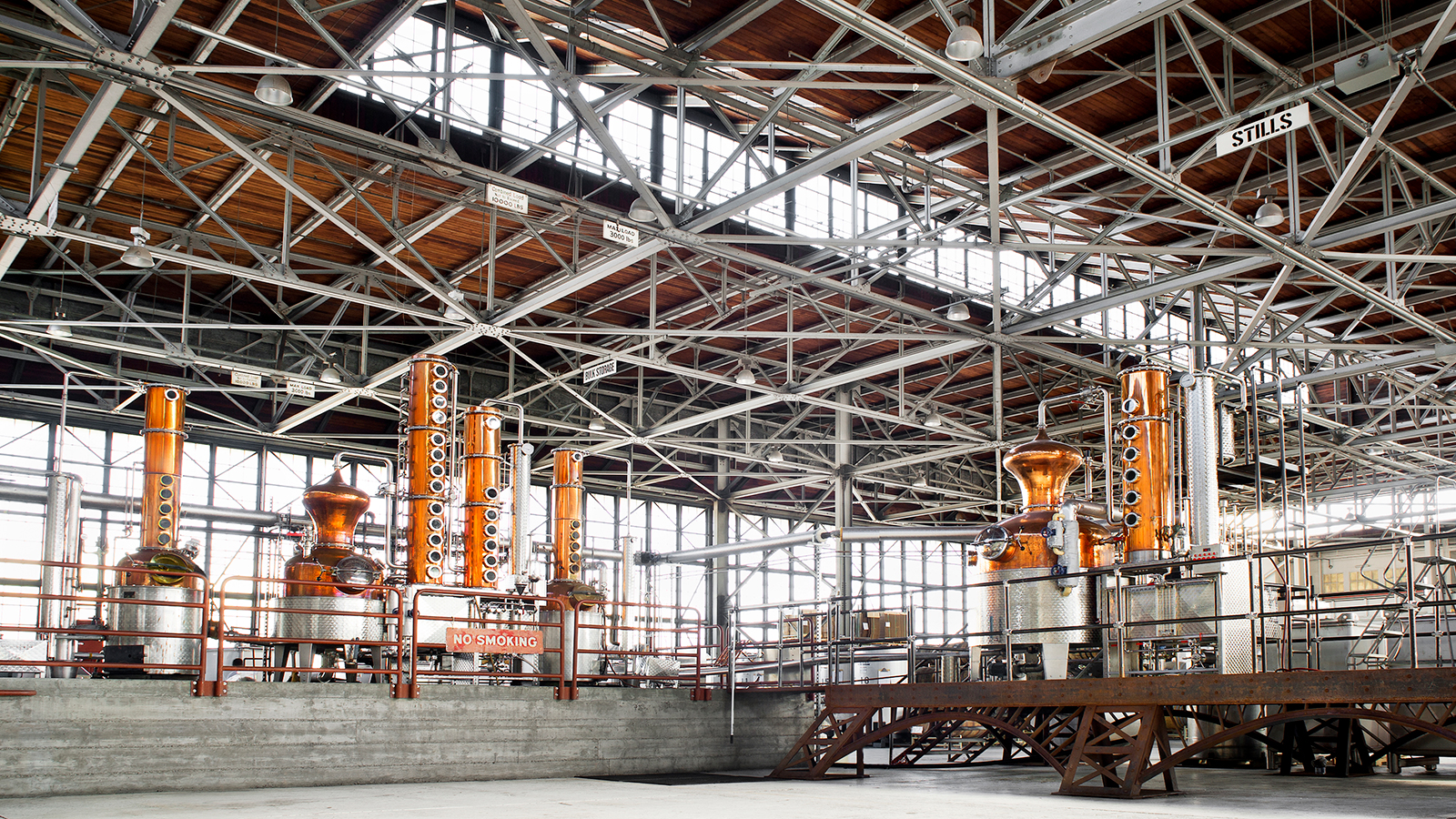 Whisky production varies depending on the style being made, the country where it originates, and other factors, but the general process remains the same in most cases. 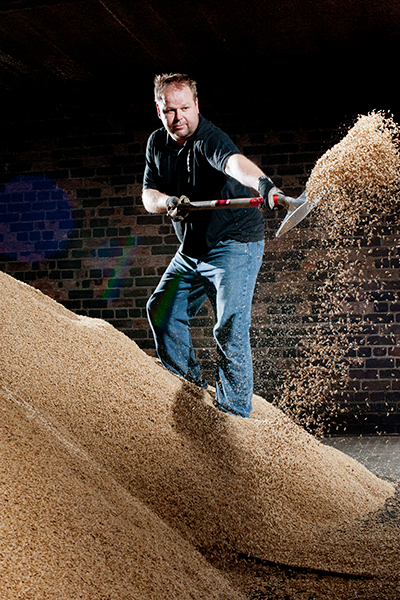 Malting at Springbank Distillery in Scotland (Photo by Martin Hunter)

All whisky starts as raw grain—in the case of malt whisky, barley, which has to be specially treated to access its sugars. The barley is moistened and allowed to partially sprout, or germinate, a process called malting which secretes an enzyme that converts the barley’s starches to sugars. Germination is cut off when the barley is dried by heating. 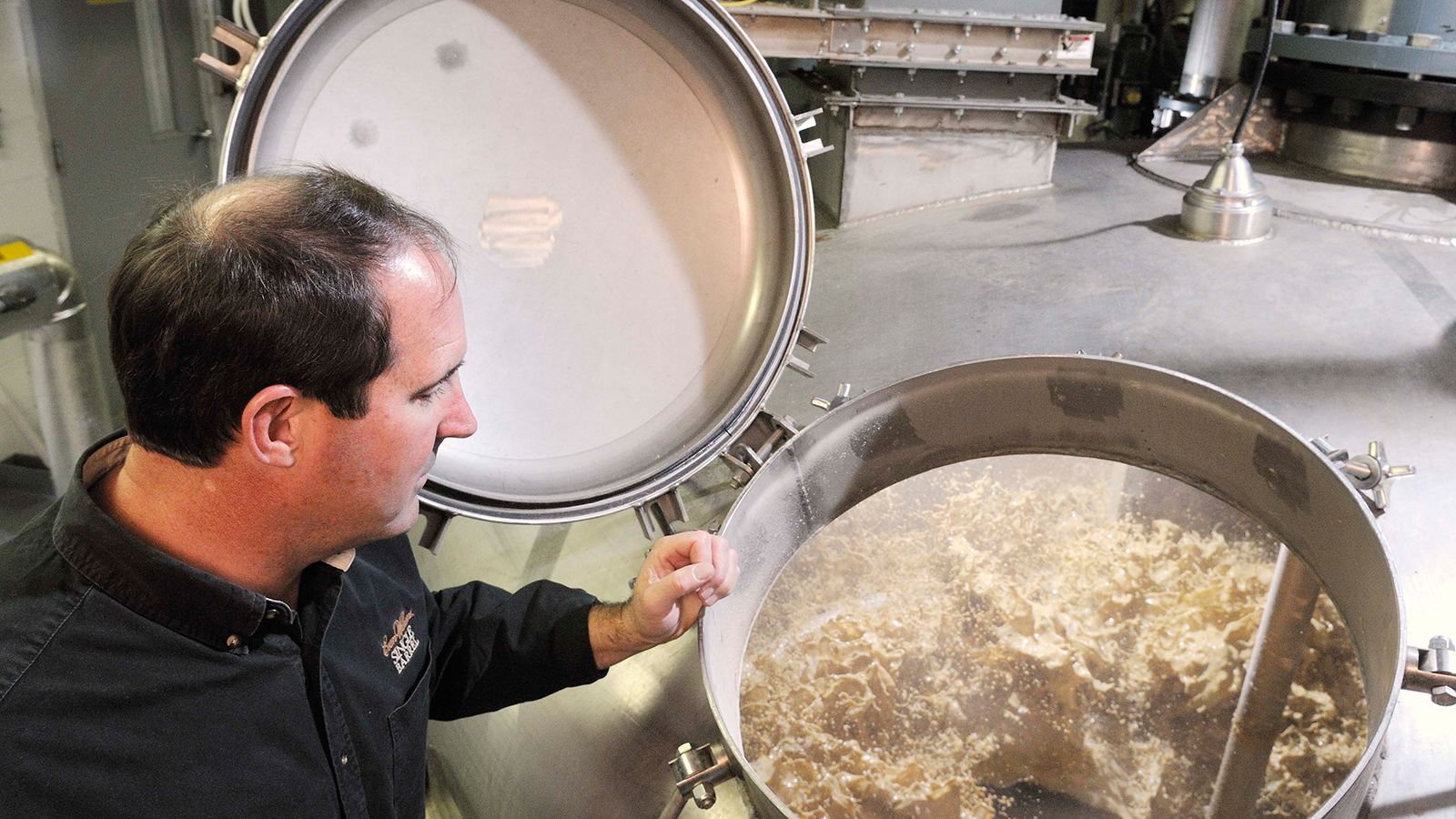 The sugars contained in the grain must be extracted before fermentation, and this is done through mashing. The grains that are being used—like corn, wheat, or rye—are ground up, put in a large tank (called a mash tun or tub) with hot water, and agitated. Even if the distiller isn’t making malt whisky, some ground malted barley is typically added to help catalyze the conversion of starches to sugars. The resulting mixture resembles porridge. Once as much sugar as possible has been extracted, the mixture—now known as mash or wort (if strained of solids)—moves on to the fermentation stage. 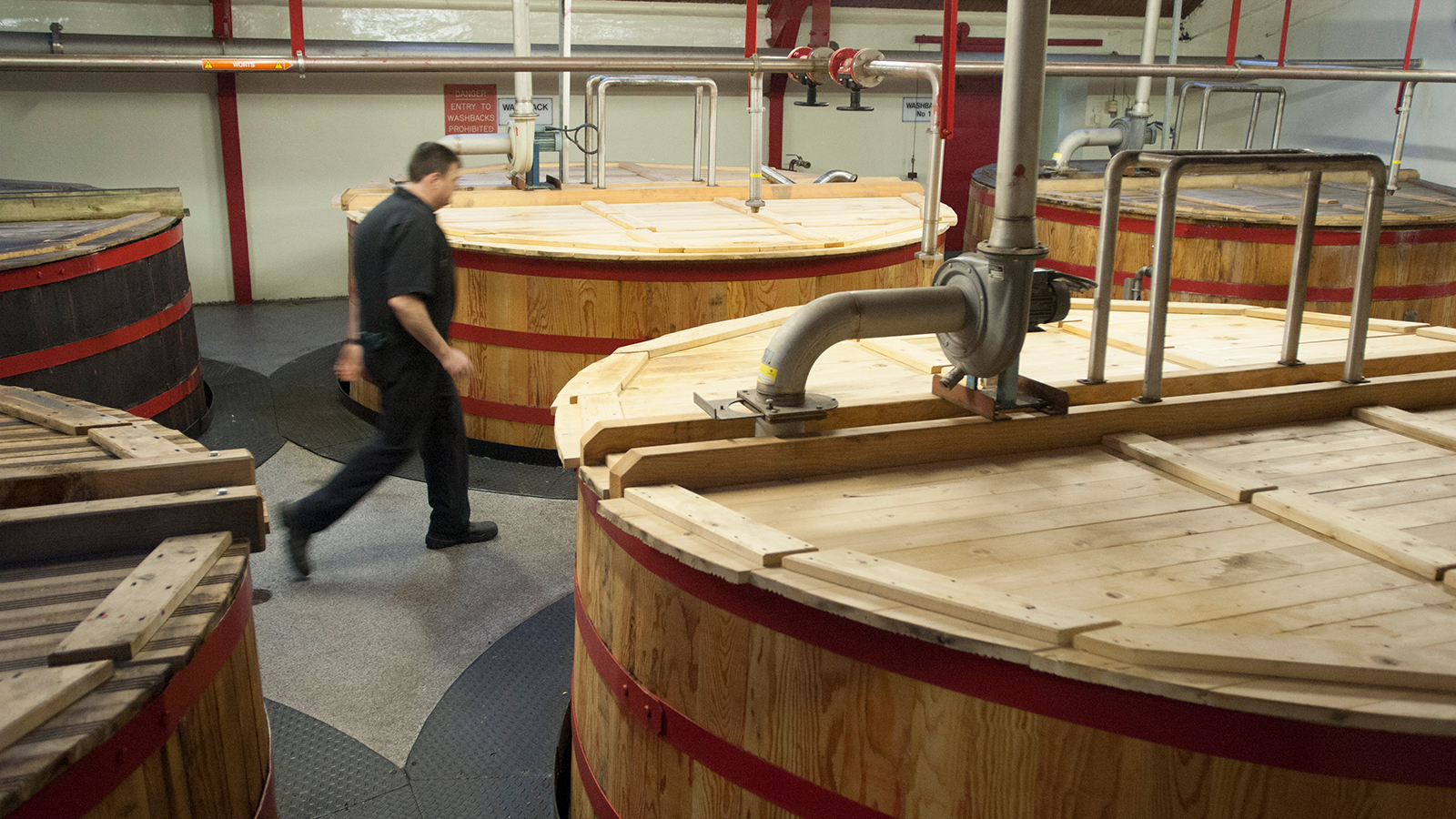 Fermentation occurs when the mash/wort meets yeast, which gobbles up all the sugars in the liquid and converts them to alcohol. This takes place in giant vats, often called washbacks. The process can take anywhere from 48 to 96 hours, with different fermentation times and yeast strains resulting in a spectrum of diverse flavors. The resulting beer-like liquid—called distiller’s beer or wash—clocks in at around 7%-10% ABV before it goes into the still.

The process of distilling increases the alcohol content of the liquid and brings out volatile components, both good and bad. Stills are usually made of copper, which helps strip spirits of unwanted flavor and aroma compounds. The two most common types of stills—pot stills and column stills—function differently. Both are outlined below.

Pot stills are used in the production of whiskies—usually, though not always, malt whiskies—from Scotland, Ireland, the United States, Canada, Japan, and elsewhere. Pot still distillation is a batch process. Some styles use double-distillation, while others are distilled three times.

The wash goes into the first still, often called the low wines still, where it’s heated up. Alcohol boils at a lower temperature than water, so the alcohol vapors rise off the liquid and into the still neck and lyne arm, eventually reaching the condenser, which turns them to liquid once again. The resulting liquid, which is about 20% ABV, goes into the second still, or spirit still, where the process is repeated. At this time, a third distillation can occur. The resulting final spirit comes off the still starting at around 60%-70% ABV. The distiller discards or reserves a certain amount of spirit from the beginning and end of the run, known as heads and tails, due to their unwanted flavors and aromas. The rest—known as the heart—goes into barrels, often by way of a spirit safe. 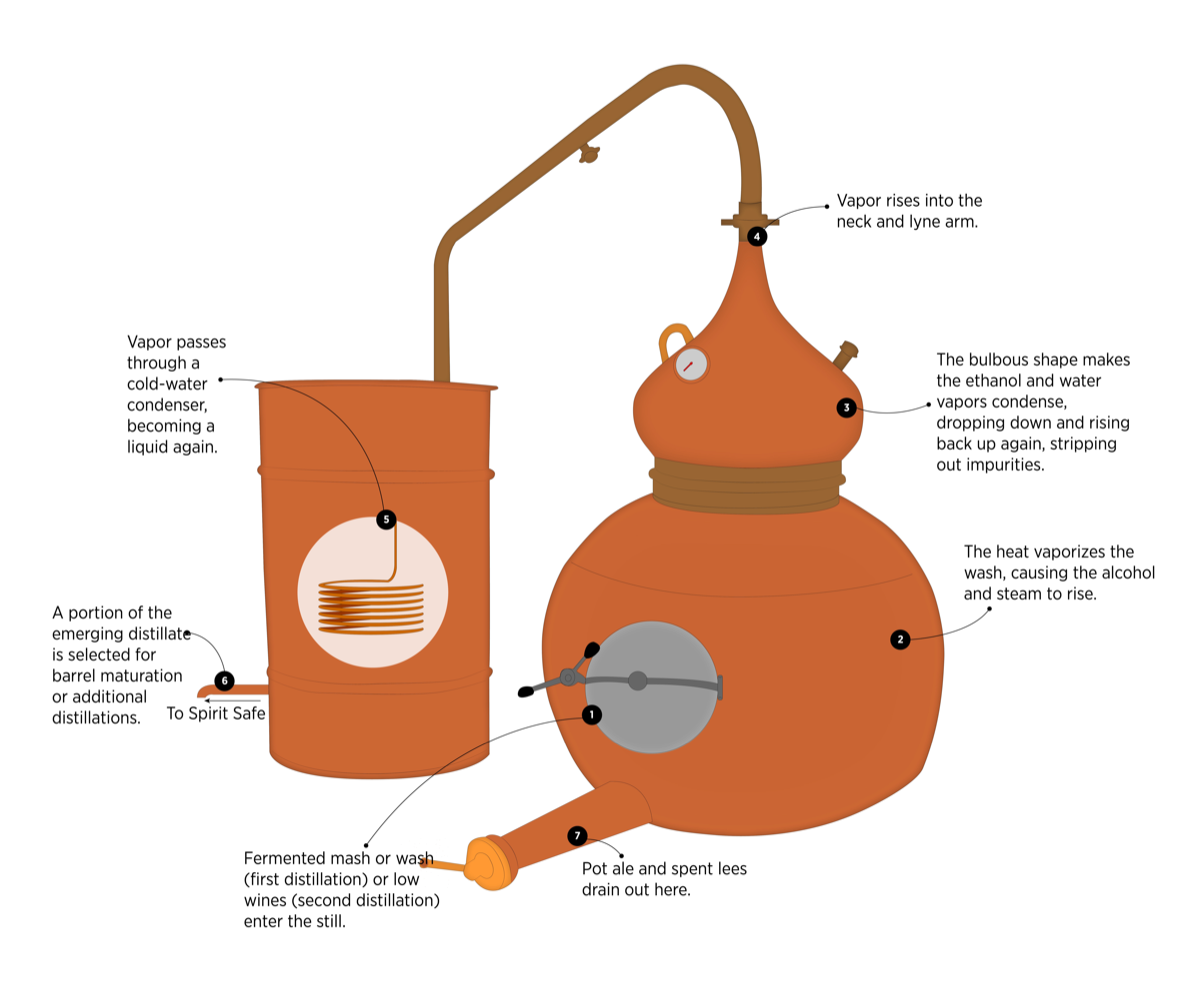 Column stills, also known as continuous or Coffey stills, are typically used to produce bourbon, rye, and other American whiskeys, as well as grain whiskies from Scotland, Ireland, Canada, Japan and elsewhere. The column still works continuously and efficiently, removing the need for the batch process of pot stills.

The distiller’s beer is fed into the column still at the top and begins descending, passing through a series of perforated plates. Simultaneously, hot steam rises from the bottom of the still, interacting with the beer as it flows downward, separating out the solids and unwanted substances, and pushing up the lighter alcohol vapors. When the vapors hit each plate, they condense, which helps get rid of heavy substances like congeners and increases the alcohol content. Eventually, the vapor is directed into a condenser. Column stills can produce spirit up to 95% ABV, although most whiskies are distilled to lower proofs.

Hybrid stills, which include a column on top of a pot, can be used in either manner. 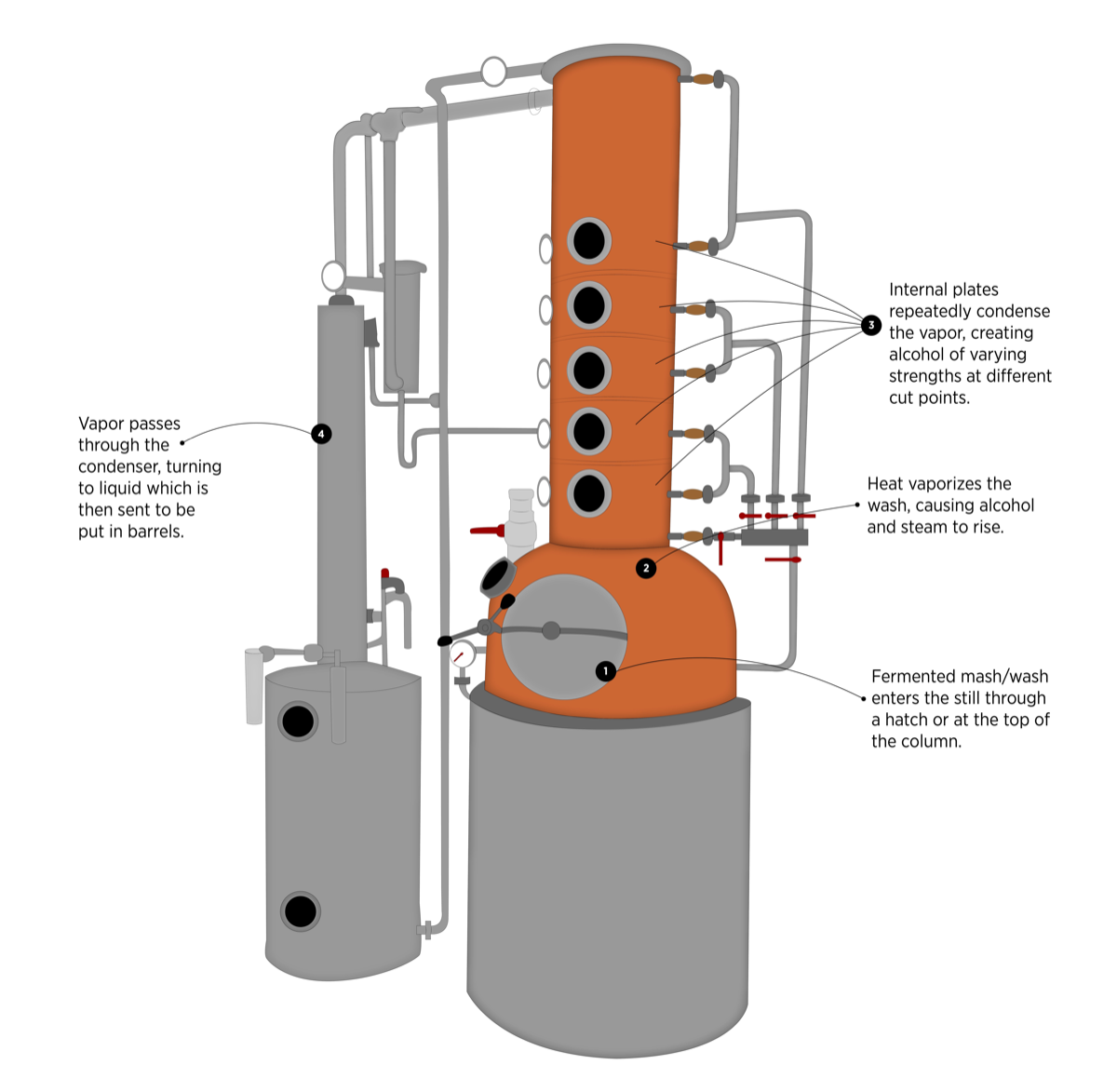 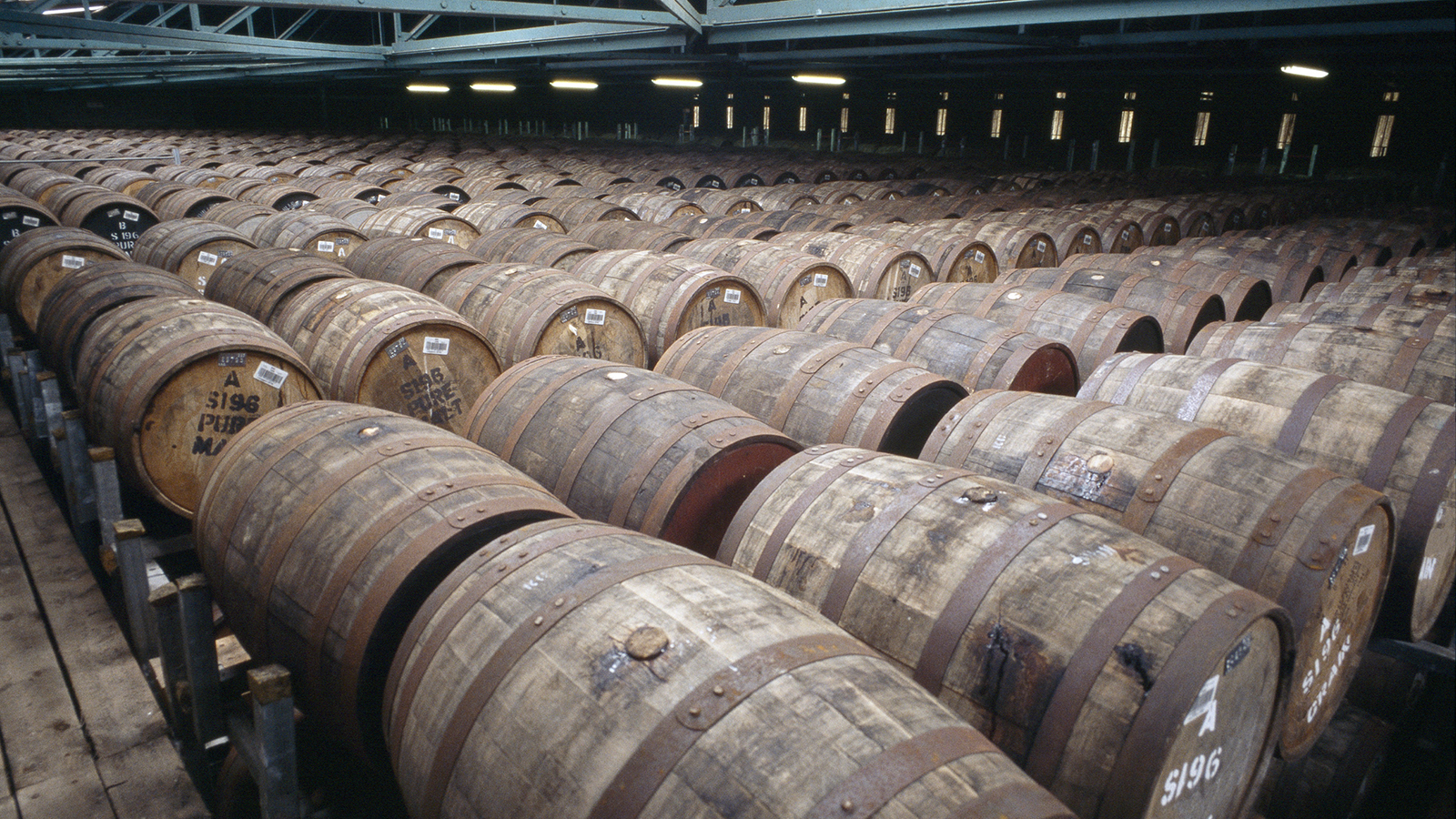 Nearly all whiskies are aged in wood—usually oak—containers. One notable exception is corn whiskey, which may be aged or unaged. Bourbon, rye, and other types of American whiskey must be aged in new charred oak barrels, while for other countries’ styles, the type of oak and its previous use are generally left up to the producer. Barrels are stored in warehouses, and as the whisky matures, some of the alcohol evaporates: This is known as the angels’ share, and it creates a distinct (and lovely) smell in the warehouse. Some whiskies, such as scotch, have a required minimum age. 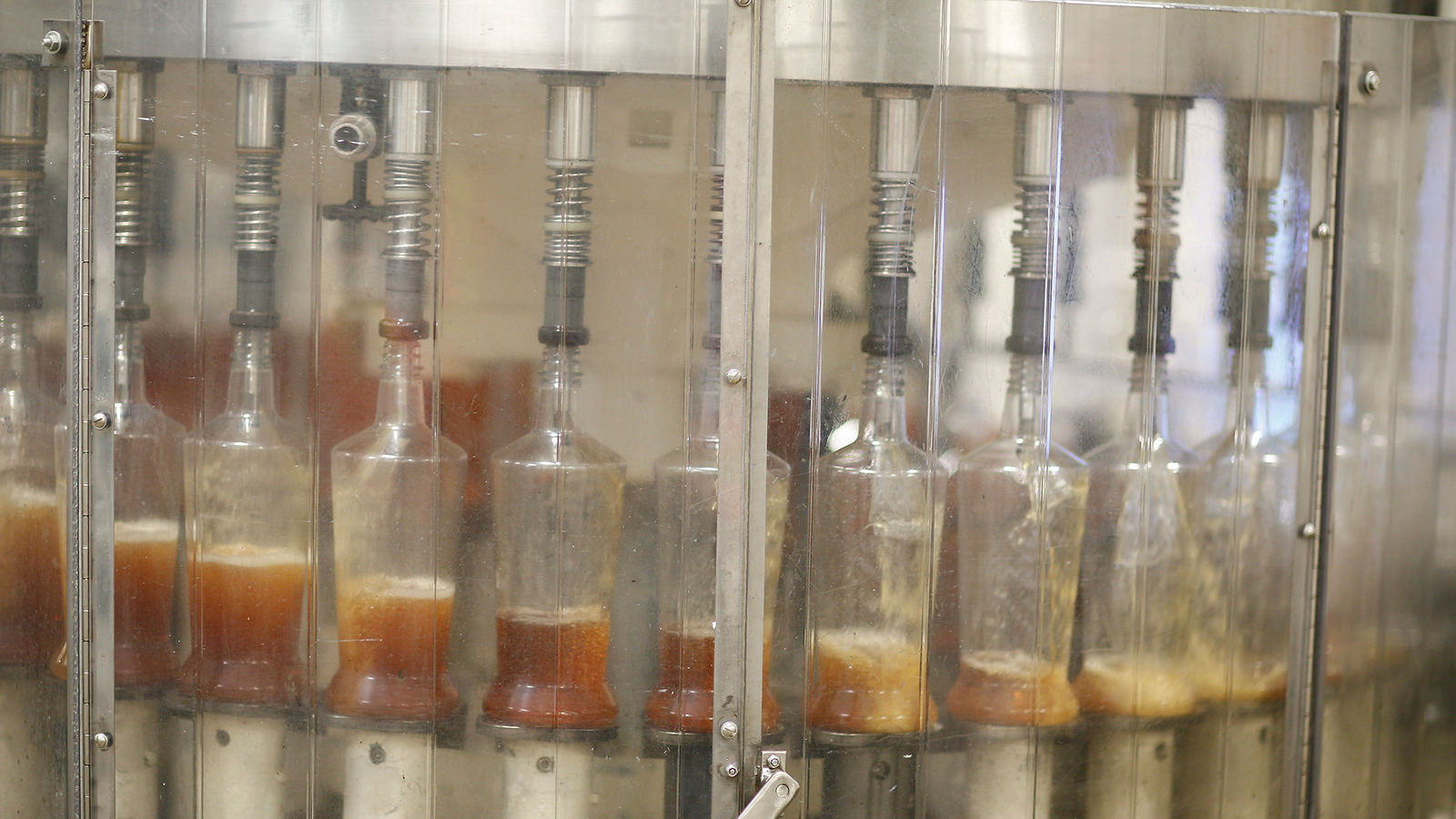 Once matured, whisky is bottled at a minimum of 40% ABV. The whisky may be chill-filtered or filtered in another way to prevent it from becoming cloudy when cold water or ice is added. For most large whisky brands, a bottling run combines a number of barrels—anywhere from a few dozen to hundreds—from the distillery’s warehouses. When only one barrel is bottled at a time, it’s labeled as single cask or single barrel. 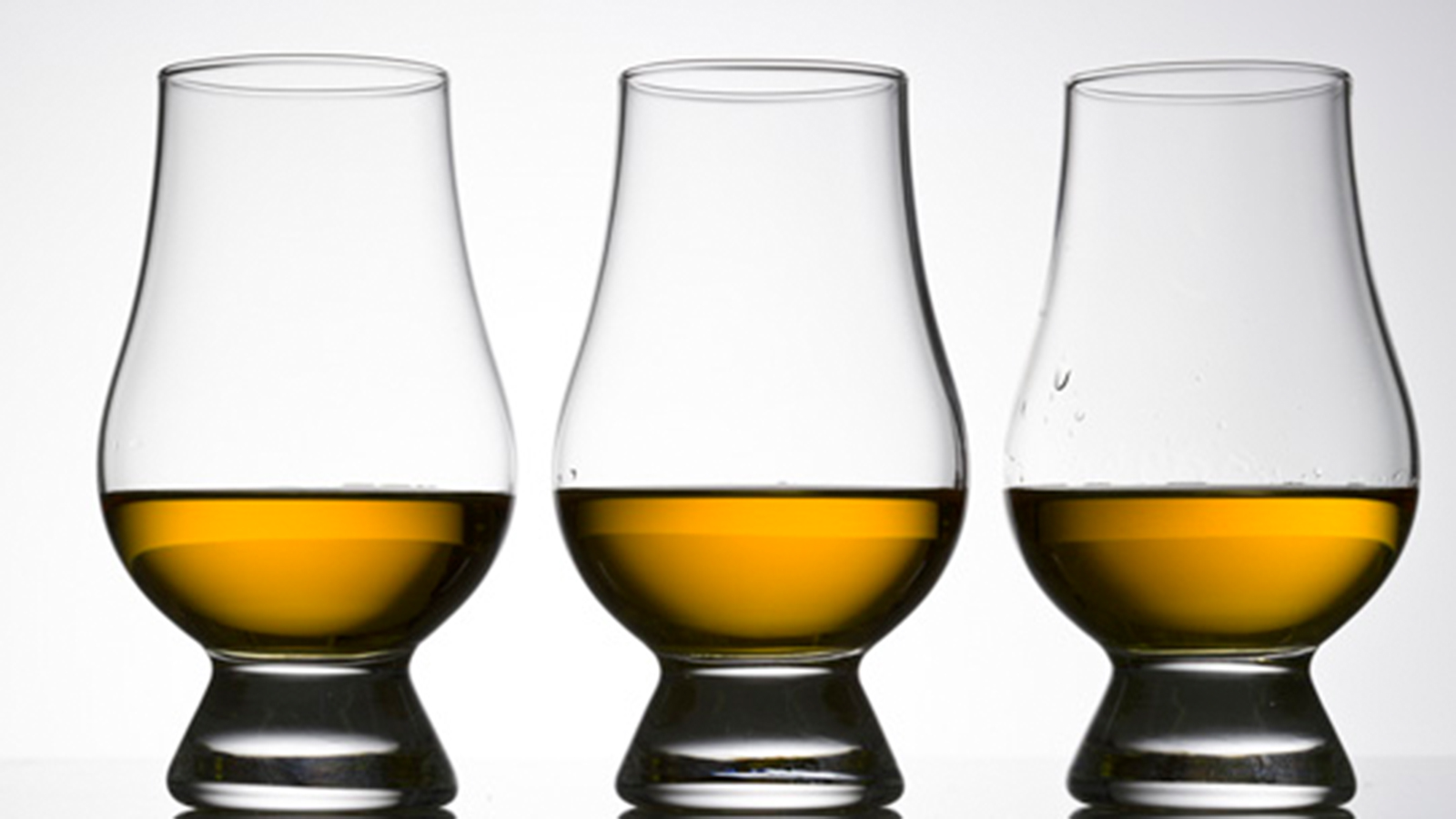 Want to know everything about whisky? Start here. 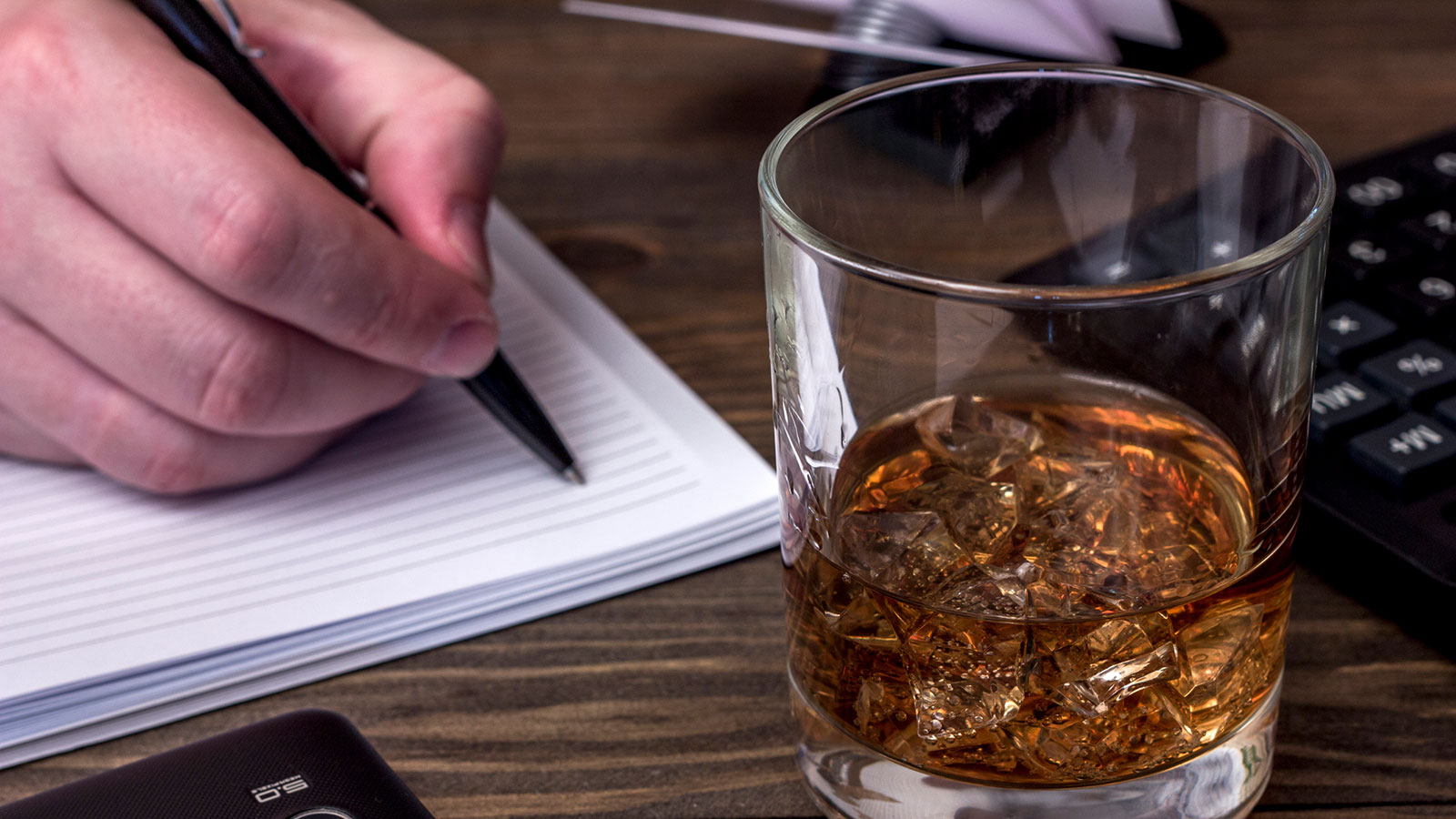 This tool will help you figure out the ideal whisky proof for you—and exactly how much water to add to reach it. 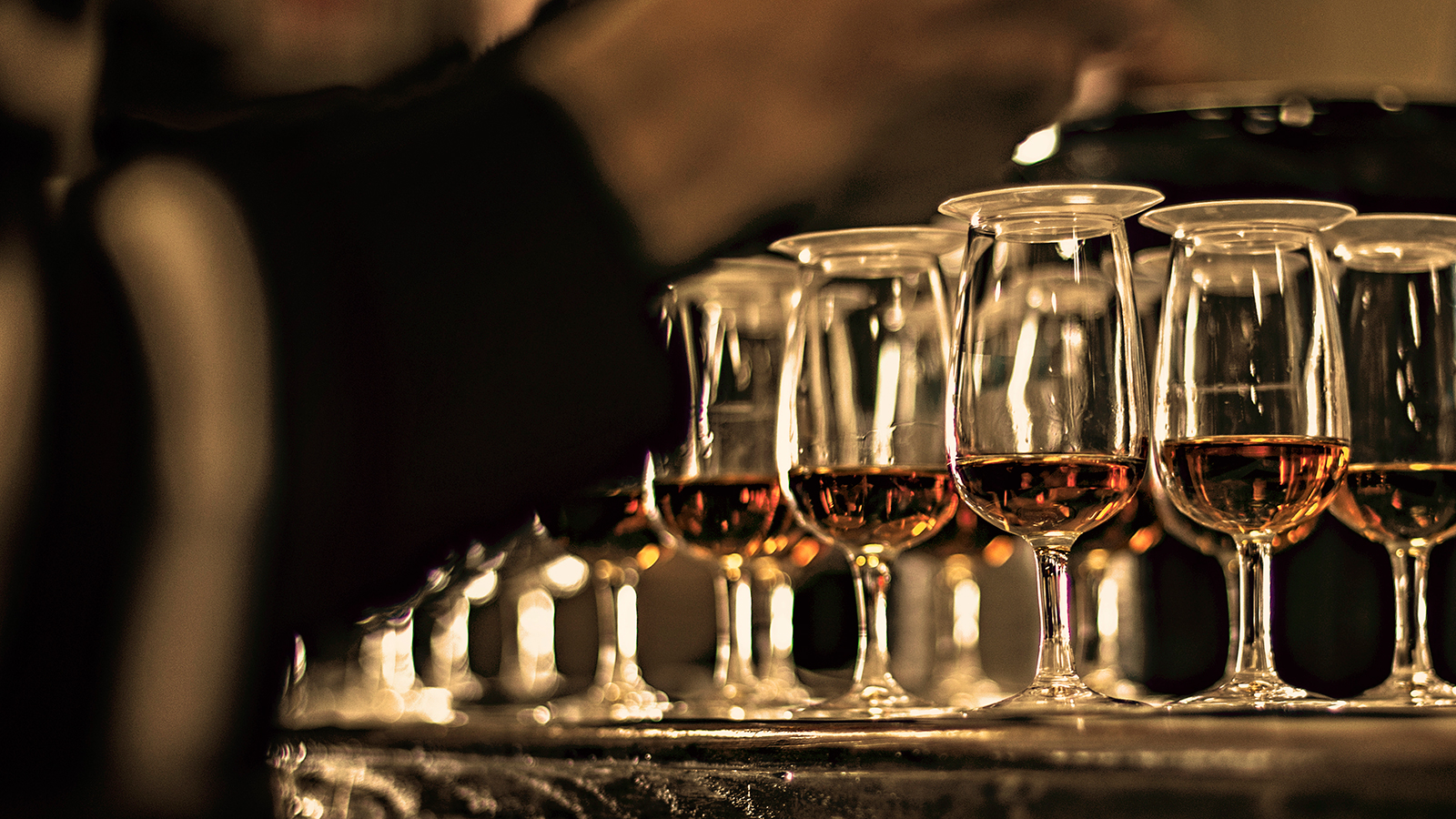 Whether you like it neat, on the rocks, or in a cocktail, learn how to make the most of your whisky.