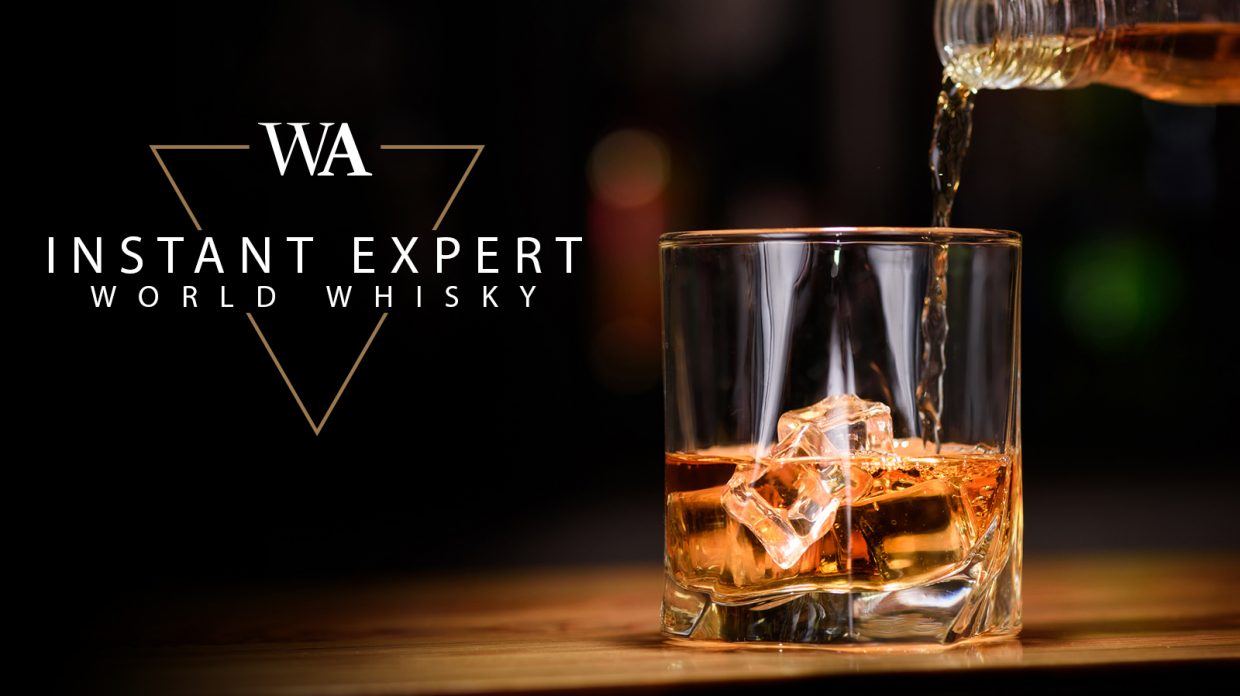 Whisky is made on six of the seven continents (sorry, Antarctica fans). “World whisky” generally refers to whiskies produced outside of Scotland, Ireland, the United States, and Canada. Japanese whisky is often set apart as a distinct style—read more about it in Instant Expert: Japanese Whisky.

World whiskies can be made of every grain imaginable, from malted barley, corn, and wheat to rice, triticale, buckwheat, and quinoa. Many world whiskies are single malts or blends of malt and grain whiskies.

All whiskies, no matter their origin, are distilled, usually in pot or column stills. To learn the basics of whisky-making, check out “How Whisky Is Made.”

Some countries have regulations regarding whisky, though these are typically not as stringent as the laws of traditional whisky-making nations. In 2015, France codified protected geographical indications for whisky from two regions, Brittany and Alsace.

In some countries, like India and Thailand, whisky can be produced from a non-grain base, such as molasses. These products—which include the top-selling whisky in the world, Officer’s Choice—are usually low-end and not widely exported. Increasingly, some of these countries, like India, are producing high-quality single malts for both domestic and export markets.

Trade agreements may define whisky according to specific parameters. For example, the European Union’s legal definition of whisky—which covers both imported whiskies and those made in the EU—states that it must be made from cereal grains; distilled to less than 94.8% ABV; matured in wooden casks no larger than 700 liters for a minimum of 3 years; and bottled at 40% ABV. Nothing can be added apart from caramel coloring. If a product does not meet these criteria, it cannot be sold as whisky in the EU. Exceptions may be made for some regulated categories, like bourbon, that are recognized as distinct products of their country of origin. This also helps protect such categories from counterfeiting.

You can take a trip around the world through whisky, experiencing a diversity of flavors and styles—here are some recommended drams to get you started.

Many curious drinkers begin their explorations with Japanese whiskies like Yamazaki, Hakushu, and Nikka. You might also want to try an offering from one of the country’s craft distillers.

European countries producing single malts include France (Brenne, Armorik, G. Rozelieures, Kornog), Belgium (The Belgian Owl), Sweden (Mackmyra, Box), England (St. George’s Distillery, known as The English Whisky Co. in the U.S.), and Wales (Penderyn), among numerous others. A few South American countries also produce whisky, including single malt, but little to none of it makes it to the United States.

There is also a growing number of whiskies that claim multiple countries of origin through creative blending.

If you want to find whisky from a particular country, search our Buying Guide.

What’s the difference between scotch and single malt whisky made in India, France, Taiwan, and elsewhere?
It’s true that many countries, from Australia, New Zealand, and Taiwan to India, France, Germany, and beyond, are making single malt whiskies—often in the traditional Scottish style. But, per longstanding regulations, only whisky that’s made and matured in Scotland can be called scotch.

So where can I actually find world whiskies?
When world whiskies actually do make it into the U.S. market, they often end up in big cities. High-end whisky bars often have a good selection of world whiskies. If you’re hunting for whiskies from a particular country, look for upscale restaurants that offer that country’s cuisine. If you don’t live near a big city, you can buy some world whiskies online. And you can try many world whiskies at WhiskyFest!

There’s a great big world of whisky out there—explore it here.