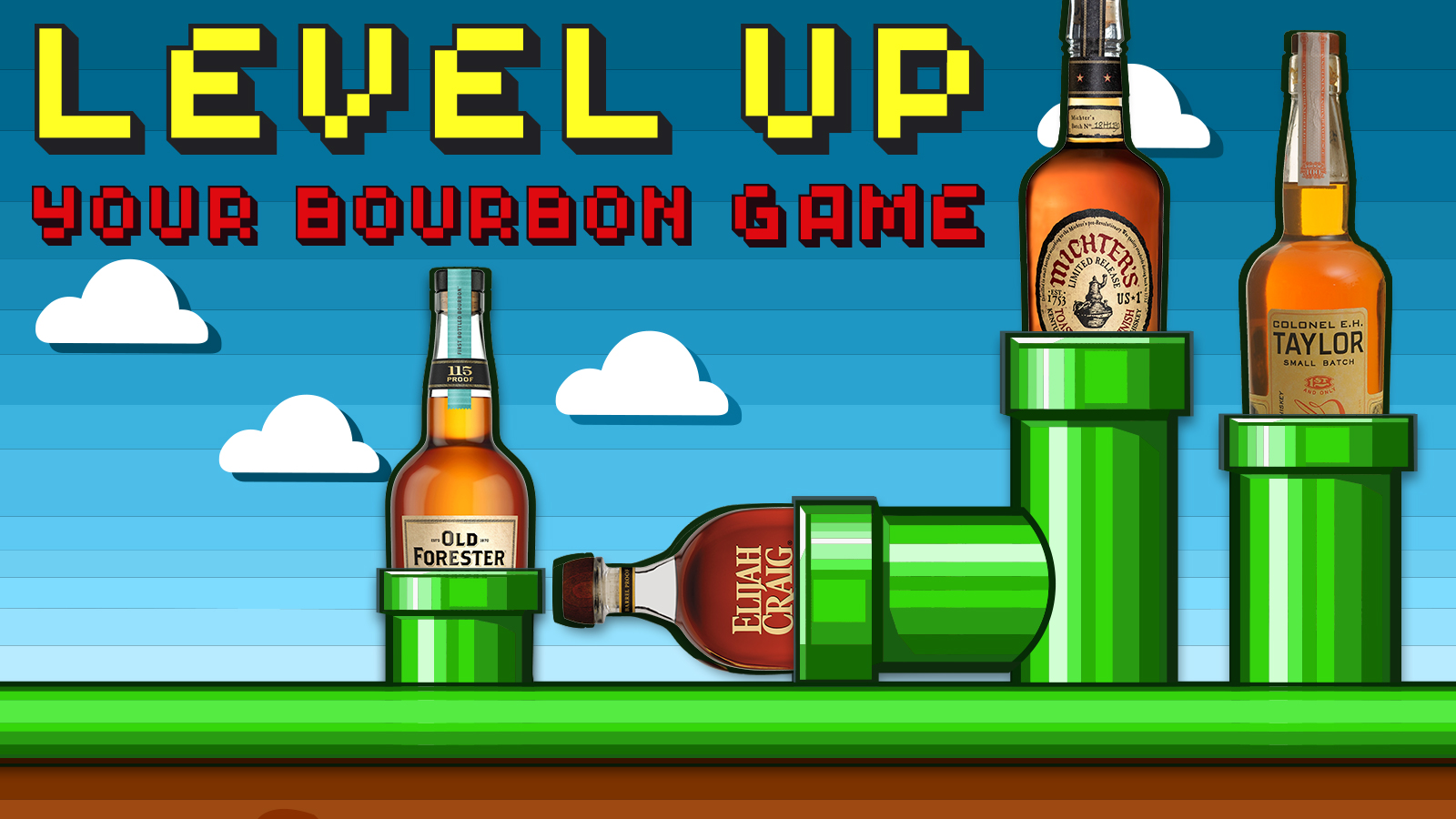 Let’s say you’ve tasted your way through some basic bourbons that have given you a foundation in flavor appreciation. You’re no longer a newbie; you have some real bourbon knowledge, and a desire for more. For you, bourbon is becoming a bonafide hobby, but you need guidance on the next few bottles to continue expanding your palate.

These key examples will help usher you into an intermediate level of expertise. They offer more complexity—some might even call them challenging—and are different in their own ways.

Bourbon 201: Intermediate-Level Bottles You Must Taste

Colonel E.H. Taylor Jr. Small Batch Bourbon—90 points, $40
One of the few Buffalo Trace whiskeys that can easily be found on shelves (shhh!), this bottled-in-bond offering showcases the excellence of the distillery’s low-rye mashbill. With strong corn aromas on the nose, the palate offers a candy-like sweetness, with hints of butterscotch and caramel corn—though the finish is long and spicy, almost a bit minty. E.H. Taylor is a great intermediate step for drinkers who are not ready, or financially able, to try Buffalo Trace’s much lauded and annually released Antique Collection.

Russell’s Reserve Single Barrel Bourbon—89 points, $50
Made at Wild Turkey, these single barrels are supposedly hand-chosen by master distillers Jimmy and Eddie Russell. Whether true or marketing fluff, the whiskey offers a serious step up in flavor and complexity compared to the classic starter bourbon, Wild Turkey 101. Drinkable neat, despite being 55% ABV, Russell’s Reserve Single Barrel is a spicy, cinnamon-rich bourbon balanced by a viscous toffee sweetness.

Maker’s Mark Cask Strength Bourbon—93 points, $50
Standard Maker’s is another important beginner pour, and excellent on its own—but it’s remarkable what is added by keeping the wheated bourbon at its natural proof. The sometimes-cloying sweetness disappears and more spice, leather, and oak come to the forefront, with a weightier mouthfeel as well. The difference is big enough to make you wonder how other bourbons might taste at barrel proof. (Keep reading.)

Elijah Craig Barrel Proof Bourbon—94 points, $60
While Elijah Craig Small Batch lost its 12 year old age statement a few years ago, the Barrel Proof version is still a full dozen years old. Bottled three times a year in batches, the proof varies, but the whiskey itself remains refined and mature, strong on the charred oak yet well-rounded on the finish. Batch B517 was named our 2017 Whisky of the Year for its proof, price point, and potent flavors.

Was Elijah Craig really the “father of bourbon” or is that just a marketing claim?

Michter’s US*1 Toasted Barrel Finish Bourbon—86 points, $60
Michter’s has gone a somewhat different route with cask finishing: rather than using a cask that previously held something like sherry or port, the distillery is putting mature whiskey—aged in new, charred oak barrels—into new barrels that have been toasted, rather than charred. (The difference between toasting and charring is important, something every bourbon drinker should know.) The result is less woody than might be expected, instead creating unusual flavors for bourbon: tropical citrus fruit, snickerdoodle cookies, and grits. Michter’s Toasted Barrel Finish is an oddball product worth exploring.

Woodford Reserve Double Oaked Bourbon—88 points, $50
Like the Michter’s above, this barrel-finished bourbon from Woodford Reserve offers an intriguing study in wood and char. Woodford Reserve Double Oaked is also aged in two separate barrels, but while the first is toasted for 10 minutes with a 25-second char, the second is toasted for 40 minutes with a mere 5-second char. This creates a ton of wood spice on the nose and initial palate, with hints of cinnamon, dark fruits, leather, and tobacco. It’s a true wood lover’s bourbon.

Old Forester 1920 Prohibition Style Bourbon—91 points, $60
All four releases in Old Forester’s Whiskey Row Series are worth tasting as they purport to capture a moment in bourbon history, but 1920 Prohibition Style is the strongest of the bunch. Meant to mimic Old Forester’s “medicinal” whiskey that was legally sold during the 13 dark years of Prohibition, this bourbon is rich on the nose and robust on the palate, with notes of chocolate-covered cherries, graham crackers, and leather.