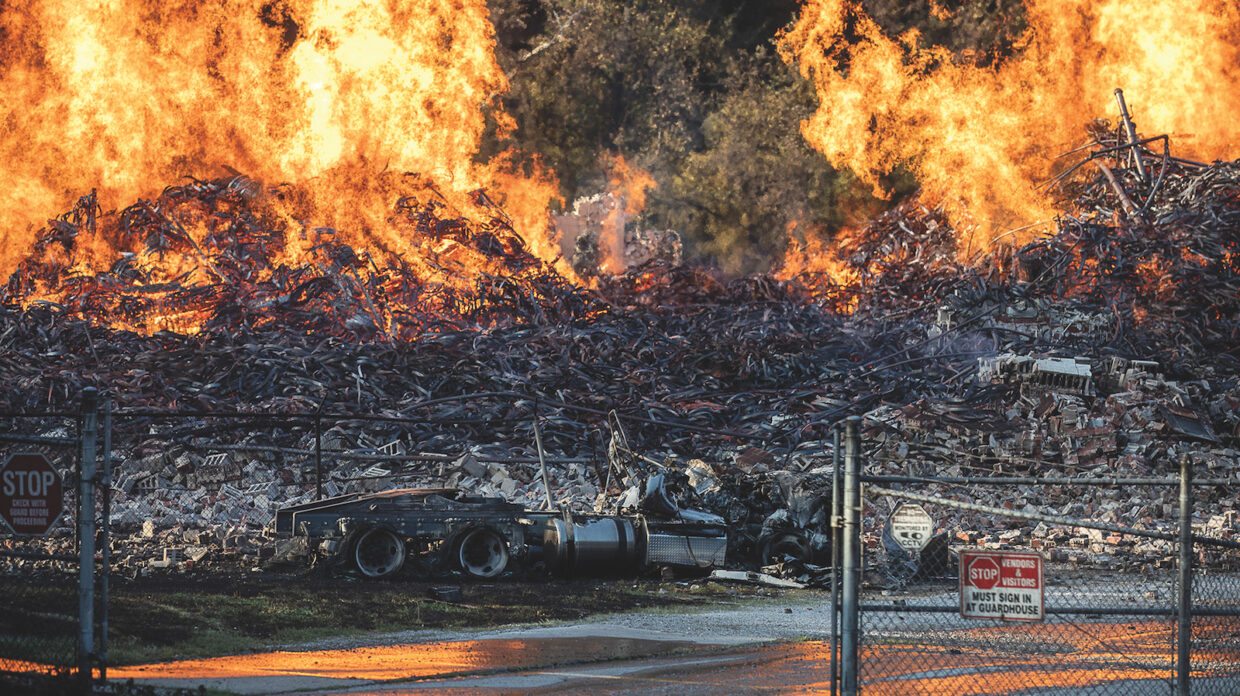 When a Jim Beam warehouse in Versailles, Kentucky went up in flames in July 2019, the world wept for whiskey. Fortunately, no injuries were reported, but the images of destruction grabbed the spotlight as the loss of 45,000 barrels of young bourbon was widely mourned.

At the time, the Jim Beam disaster was the most recent in a string of warehouse catastrophes, including in June 2019 when some 4,000 barrels at an O.Z. Tyler Distillery (now Green River Distilling Co.) warehouse in Owensboro, Kentucky went tumbling as the building partially toppled during a thunderstorm. In June 2018, part of a warehouse at the Barton 1792 Distillery in Bardstown collapsed, sending around 9,000 barrels of aging spirits crashing to the ground; the rest of the warehouse fell two weeks later.

In addition to serious environmental damage, such mishaps can mean real liquid losses for whiskey makers. First, some perspective—a standard bourbon barrel stores 53 gallons, or 200 liters of liquid. Given a standard barrel typically produces 150 to 200 bottles, the Beam loss clocks in at around 8 million bottles at barrel proof. At $30 per bottle, we’re talking about $236 million.

Along with fires and floods, warehouses are susceptible to something much, much smaller

As of January 2018, Kentucky distilleries were aging some 7.5 million barrels of bourbon—the biggest inventory in more than four decades, according to the Kentucky Distillers’ Association—so bourbon lovers are unlikely to see it affect supplies. Beam Suntory noted the loss due to the 2019 fire represented just 1.4% of Jim Beam inventory in the state and confirmed it wouldn’t affect availability, adding that it was “relatively young whiskey.”

However, consumers are still left wondering what’s going on in Kentucky and when the next blow may come, as distillers (and their insurers) reconsider how they are monitoring and maintaining these buildings.

Girding for the next blow

When the O.Z. Tyler facility partially collapsed it was attributed to severe storms that battered the area. Master distiller Jacob Call explains that the distillery’s 26-acre campus includes a range of multi-use buildings of varying construction types, all kept under close watch. “We have completed work on virtually every building on our property—including repairing every rickhouse on-site,” Call tells Whisky Advocate. 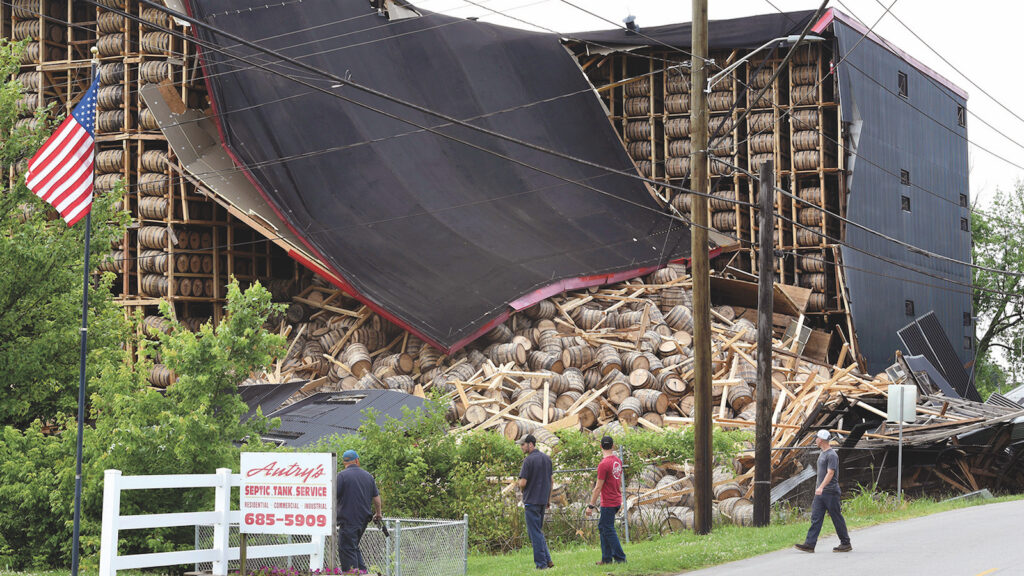 Workers at O.Z. Tyler Distillery (now Green River Distilling Co.) in Owensboro, Kentucky assess the damage to a warehouse that collapsed during a thunderstorm in June 2019. Master distiller Jacob Call says around 4,000 of the 20,000 barrels stored at the warehouse were affected. (Photo by Alan Warren / The Messenger-Inquirer via AP)

Buzick Construction Inc., a company specializing in distillery, commercial, and industrial construction, completed a detailed review of every rickhouse on the property. Following an investigation, O.Z. Tyler decided to deconstruct the damaged warehouse’s remaining portions. Barrels were removed from the debris, salvaging any that were intact. “We decided it would be best for us to control the situation by bringing the warehouse down deliberately, on our terms,” Call says.

Additionally, O.Z. Tyler created an environmental containment and response procedure involving an earthen berm surrounding the structure. Warehouse disasters with uncontained spills can cause water contamination and fish kills. Finally, they implemented a high-tech app-based system to monitor their rickhouses around the clock in real time. The system continually monitors movement, vibration, temperature, and humidity in the rickhouses.

In contrast to O.Z. Tyler and many of the other legacy distillers, Bardstown Bourbon Company is a relatively young site, with the first construction in 2014. “Most of [these disasters] are happening in aging warehouses,” notes David Mandell, former president and CEO of Bardstown Bourbon Company. The material a warehouse is made of—whether wood, concrete, or steel—also comes into play. “As you have problems with the wood or the way it is settling over time, you’re replacing, you’re maintaining,” Mandell says. “It’s very similar, in many ways, to how you maintain a house, except you’ve got thousands of barrels stored in it, and it has to support the load.”

Bourbon warehouse risks certainly aren’t confined to Kentucky distilleries. As part of a multi-million-dollar expansion in 2019, Colorado’s Breckenridge Distillery founder and CEO Bryan Nolt says that all of its buildings were either newly constructed or retrofitted to meet stringent regulations for high-risk facilities involving flammable materials.

That means not just aiming to prevent disasters but also making them more manageable for responders. Ethanol is flammable, and when a bourbon warehouse containing liquid of about 60% ethanol ignites, it can present an unusually violent conflagration. Breckenridge constructed its newest warehouse using steel rather than wood and avoids high-pile barrel storage in favor of low stacks. “When you start going high-pile, it’s just going to stress the system,” and potentially firefighters’ ability to extinguish a blaze, Nolt explains. “We do everything on pallets, as opposed to a rick.”

Nolt acknowledges that warehouse disasters are sometimes impossible to prevent. “But you can, just like anything else in life, try to do things the right way and minimize your risks. Because life, and business, is about risk as much as it is about what you’re doing and making.” 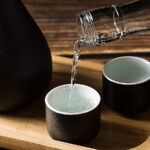 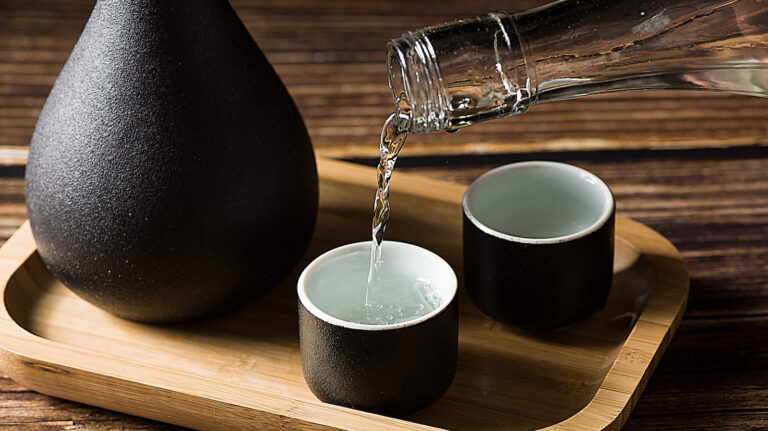 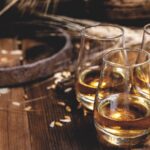 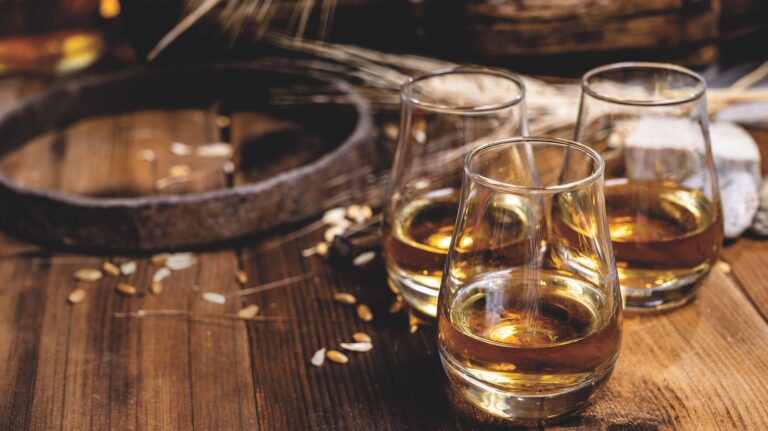