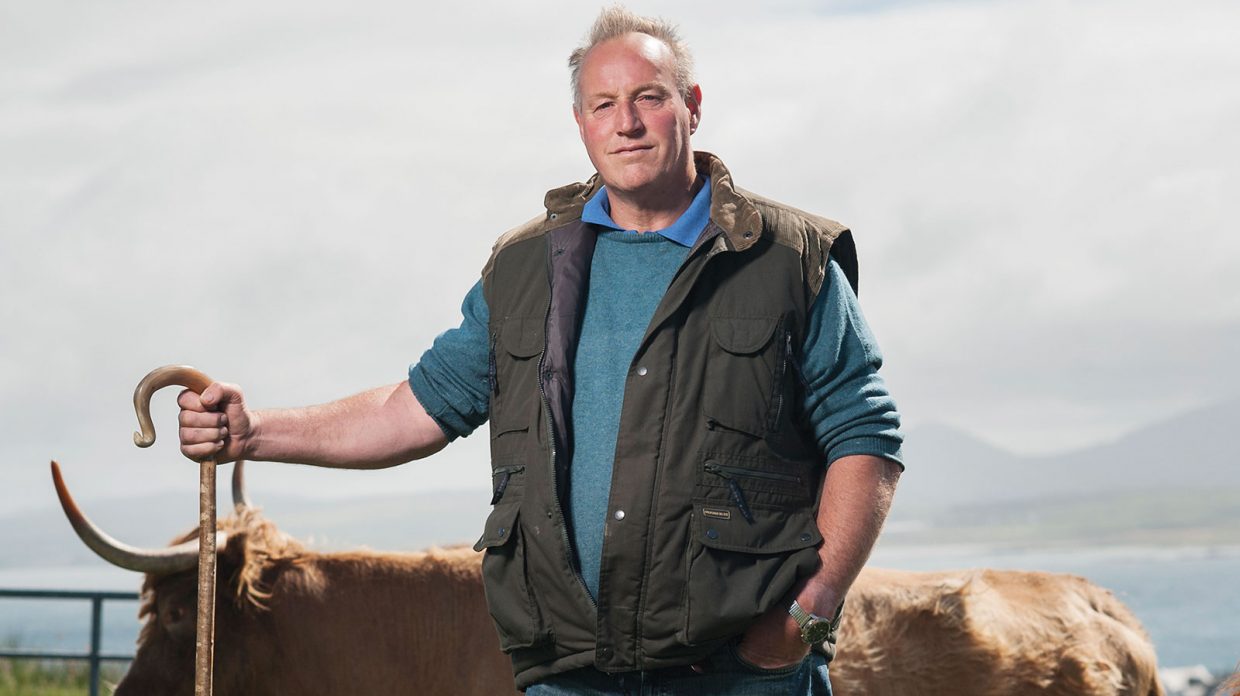 Farmer James Brown can converse with the Aberdeen and Highland cattle that roam Octomore farm, his sprawling lochside property, not far from the Bruichladdich distillery. This vast expanse is where he grows the barley Bruichladdich uses to make the ultra-peaty whisky named for the farm, which is named for the distillery that operated on the property until 1844. He beckons the majestic animals with a call: “RE-bit. RE-bit.” I can only assume that’s bovine for “Food here. Come and get it!” because the cows’ heads perk up and they trundle toward him.

Brown, 63, is known as the “Godfather of Soil.” In 1960, his family moved to the Octomore farm from down the road. There was no electricity on the property. (He still lives there with his wife; they rent out three buildings, including the old Octomore distillery, as holiday cottages.) His family farmed beef, but Brown dabbled in other careers. His big break came around 2000 when the long-shuttered Bruichladdich distillery reopened.

“I didn’t know anything about whisky properly. It’s been here all our lives, but whisky was just whisky. We didn’t appreciate the different ages and peat levels and all the chill filtering and what. We farmers just used the distilleries for the byproduct,” he explains. But then Duncan McGillivray, the recently retired distillery manager who was integral in restoring the facility, learned of a spring that ran through the farm.

“They came and looked in the well, smelled the water, sipped the water. They wanted barrels of it. Right from the start they were using it to reduce the whisky—and that was before they were doing their own bottling here,” he says. “But the water’s very difficult to get at, and we’d have to get the barrels down the steep, steep slope.” Transporting the liquid was a strategic endeavor. James would fill 20 barrels through the night. “A barrel takes twelve minutes to fill. You put the hose into the next one, then the next one. You just had to sit, grin and bear it in the dark.”

Today, with electricity over the well, he plugs in the tanker and it fills in ten hours. He now delivers two 10,000-liter tankers to the distillery twice a week. The water is largely used for Botanist, Bruichladdich’s gin, and to cut the single malt to bottling proof.

So Brown’s barley and water can be found around the globe. And sometimes he goes where it goes. He told me about when he flew first class to Los Angeles to talk during a training for Remy Cointreau employees after the company purchased Bruichladdich. “I had never spoken on a stage about anything in my life. I told them my story; couple of wee jokes. Don’t know if they understood me or not, but I quite enjoyed it. And everyone wanted to come speak to me,” he says, still casually astonished. “It’s wonderful knowing that not only the barley in Octomore goes all over, but the water in the gin as well. It’s given me a whole different way of life, of seeing the world, in a good way.”