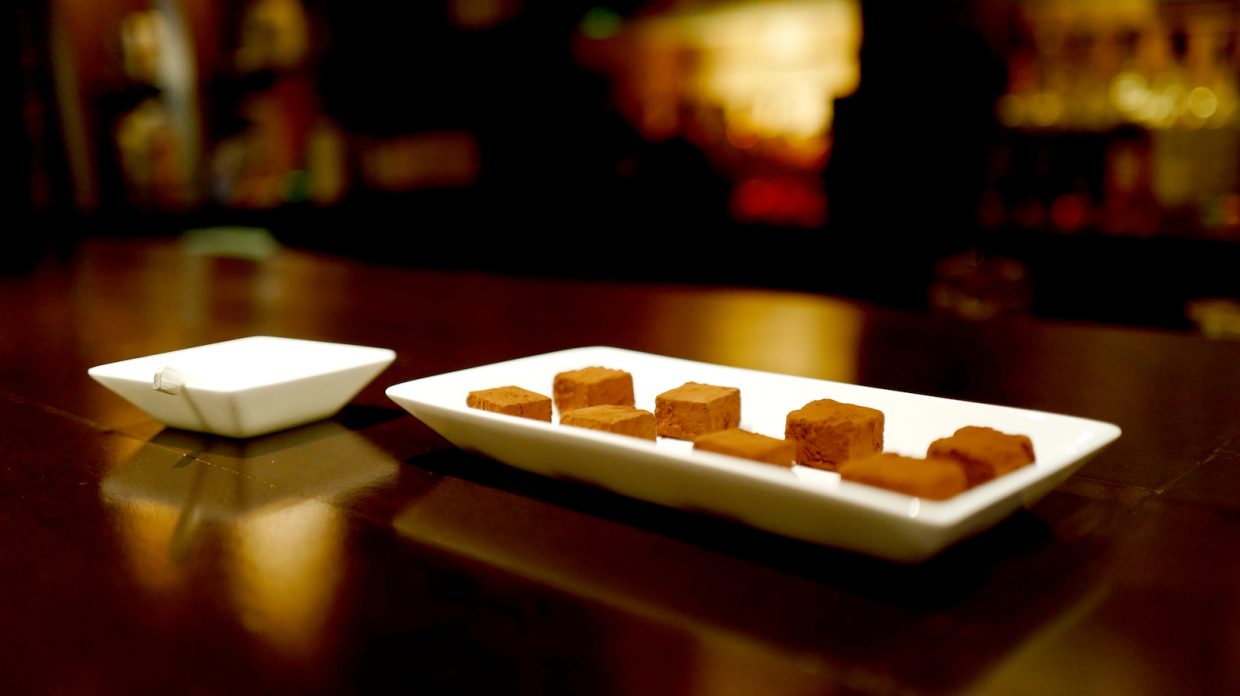 At Nikka Blender's Bar in Tokyo, Satoshi Kurosawa makes cocoa-dusted chocolates with Taketsuru malt whisky, preferring to serve them to customers rather than selling them. (Photo by Adam Robb)

Ichiro Hiidome has been serving his homemade chocolates to patrons of b.a.r. Executive Bar for years. Like most of Hong Kong’s better whisky dens—Butler, Club Qing—his domain hides in plain sight, on the 27th floor of a nondescript Causeway Bay office building overlooking Happy Valley racetrack. The view is framed by hundreds of precious pours that keep a 1983 Suntory Sherry Wood in good company, while beneath the bar sits something more likely to be found in Tokyo: a small Tupperware container, stacked with squares of Japanese dark and milk chocolate blended with Nikka Taketsuru Pure Malt. The sweets represent a Tokyo bar trend that’s found its way westward.

A native of Japan, Hiidome is a purist behind the bar. The few whisky cocktails he serves are blended with fresh muskmelons and pione grapes imported from Japan. His ice is hand-chiseled. “And when customers requested we serve dessert, I went about devising my own recipe, recalling how popular whisky and chocolate pairings are back in Japan,” he says.

Hiidome’s care and attention to detail are reflected in his chocolate. “It’s an insult to the customer to serve store-bought chocolate,” he says. So now he spends two hours a day to prepare a single batch, measuring and blending the chocolate to his own satisfaction, then guiding his customers’ pairings so they get the most out of each combination, suggesting fruit-forward expressions from GlenDronach, Royal Household (a blended whiskey from Buchanan’s only available in Japan), and Tasmanian single malt Sullivans Cove. Hiidome’s discipline is shared among the small circle of Japanese bartenders who elevate chocolate pairings to the level of art—though the trend started more modestly.

No one at Beam Suntory can recall who issued the guidelines Suntory distributed in 2010, when the company pushed a Japanese market-wide campaign to encourage pairing whisky and chocolate. Japan was in the midst of a grown-up chocolate moment. Asahi released canned chocolate-rum cordial cocktails, Sapporo had a bitter chocolate stout collaboration with Royce’ Chocolate, and Suntory joined with South Korea’s Lotte Corp. on a series of chocolate confections blended with Yamazaki and Hakushu whiskies. But, Hiidome insists, as a matter of professional pride, no self-respecting bartender would serve a patron a snack he didn’t make himself. And today there are still establishments across Tokyo where bartenders have become inadvertent chocolatiers. 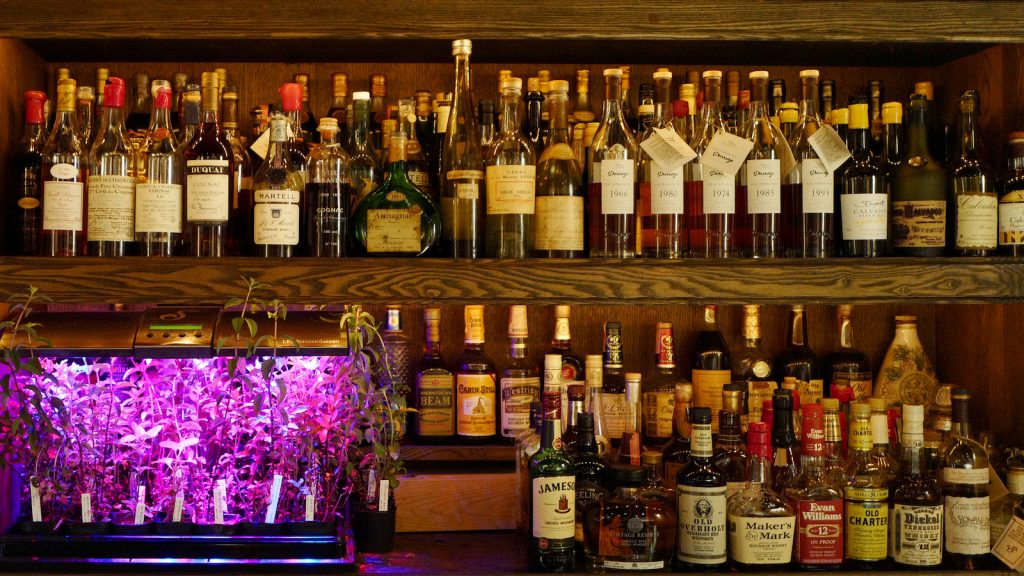 At basement bar Odin, Takahiko Kikuchi grows mint among the bottles, using the leaves for both custom-made chocolates and cocktails. (Photo by Adam Robb)

Takahiko Kikuchi claims his chocolates precede the entire movement. When he opened Odin, a basement bar near Tokyo’s Ebisu station, in the 1990s, an early regular who worked as a pastry chef asked Kikuchi what he did with his citrus rinds. The chef suggested making chocolates, and inspired in Kikuchi an obsession that has gone far beyond shaving yuzu peels. “I think everyone else stole my idea,” insists the impassioned barman as he shows off his latest seasonal infusion, a fist of peat he brought back from Ardbeg Distillery on Islay, which he and an assistant smoke over charcoal in a makeshift bar kitchen, infusing its aroma into French Kaoka chocolate. “I started making chocolates before I could find organic chocolate on the internet,” Kikuchi recalls, noting that he now applies the same effort to sourcing ingredients that he does sourcing spirits. Behind the bar, half of the bourbon shelf is devoted to an ultraviolet garden, cutting short a row of vintage bottles, where he grows mint for chocolates and cocktails. Kikuchi rightfully believes his competition only makes raw chocolates, while he claims to be the only bartender to infuse his own ganache—an effort that cuts into profits but results in a priceless sense of pride.

Satoshi Kurosawa had decades of experience behind the bar by the time he took the helm at Nikka Blender’s Bar in Tokyo’s Aoyama neighborhood, so he was surprised by the lack of personal touch in the edible offerings. When he joined the bar in 2014, it served a popular snack of raisin butter sandwiches, with the raisins soaked in rum, as well as a selection of Swiss chocolates. Kurosawa noticed the rum affected his customers’ palates, so he now soaks the raisins in Taketsuru, the bar’s most popular offering. Once a week, he makes a batch of chocolates as well, cocoa-dusted chocolate cream confections that proved so popular that Nikka asked if he’d like to license a kitchen and sell the chocolates by the box. He declined. “It’s too much bureaucracy,” he says, preferring to witness his patrons’ enjoyment of the dozens of orders he sells nightly.

Chocolate pairings, homemade or otherwise, have become so popular at Tokyo’s independent bars in recent years that the city’s hotel bars are now capitalizing on the trend, allowing bartenders and professional pastry chefs to work side by side. At Park Hyatt’s New York Bar, 1,800 yen (about $18) buys a small plate of dark and milk chocolate chunks, the most affordable nibble on a menu whose whisky options top out with a 1967 Glenlivet 46 year old at 35,000 yen (about $325). The Mandarin Bar at the Mandarin Oriental Tokyo offers a 7,900 yen (around $70) tasting that pairs bitter tea-infused chocolates from the pastry kitchen with a flight of Japanese whiskies aged in sherry and bourbon casks, like a brown sugary Mars Komagatake Limited Edition 2018 single malt.

But the Ritz-Carlton Tokyo, which was the first hotel to explore whisky and chocolate pairings, takes spendy matchups to a new level. Kentaro Wada commands The Bar on the hotel’s 45th floor, where a rolling chocolate cart—packed with nine exotic flavors like sweet onion caramel and a fruity clove inspired by the hotel’s signature aroma—was once wheeled to any guest ordering a whisky. But lately the hotel has developed a premium pairing menu geared more toward high-rolling executives than salarymen. The Bar’s most recent offering is a 65,000 yen (around $600) tasting that includes three select chocolates infused with apricot-tonka bean, cherry, and caramel, each matched with three half-ounce pours: a limited edition of Ichiro’s Malt & Grain, a 1988 Karuizawa single cask, and a 1996 Yamazaki 17 year old, all exclusively produced for the hotel. The offerings may be less personal, but there’s no less pride on display—particularly as far as the whisky is concerned. “One of the advantages we have over smaller bars is buying power to offer bottles our competition can’t,” Kentaro says, signaling that this trend still has room to grow.

Though most of its whisky goes into blends, Deanston makes an outstanding, under-the-radar single malt.