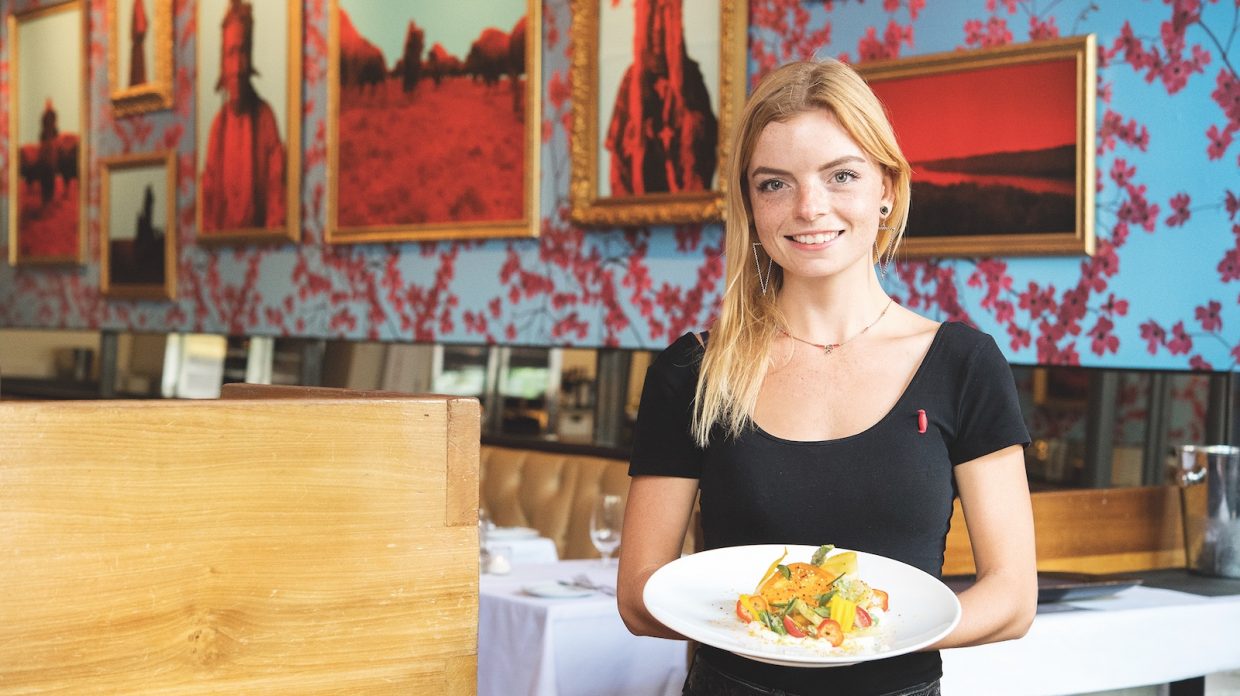 Proof on Main is a whiskey lover's paradise, with custom flights, a Highball menu, and hundreds of whiskies to choose from, including several private-barrel picks. (Photo by Magnus Lindqvist/GLINT studios)

That familiar scent—like sweet, tangy sourdough—fills the nostrils upon crossing the threshold of Michter’s Fort Nelson Distillery on West Main Street. The interior features a fresh, white steel skeleton, designed to hold the aging brick building erect, and deep within lies the aroma’s source: twin cypress tanks where a secret whiskey mash ferments. The tanks were reassembled on-site and, along with their companion copper stills, belonged to Pennsylvania’s Michter’s Distillery, closed since 1990. Originally manufactured by Louisville’s Vendome Copper & Brass Works, this is a homecoming.

The story is one of revival. Nine (count ’em) distilleries have opened in downtown Louisville in the last nine years. Back in 2011, historic Whiskey Row, where over a century ago 50 distilleries thrived a few blocks from the Ohio River, seemed doomed for demolition. The aging buildings—including the original headquarters for Brown-Forman, distillers of Old Forester, Woodford Reserve, and more—had lain abandoned, sitting in disrepair for decades. That’s when Michter’s and newly elected Louisville mayor Greg Fischer stepped in. Inspired by the hugely successful Kentucky Bourbon Trail that beckoned visitors to the surrounding counties, the city proper embraced bourbon tourism. Fischer (now in his third term) dubbed the idea “bourbonism,” and Louisville’s Urban Bourbon Trail now boasts 44 member bars and restaurants—each locally owned. Member bars must offer a minimum of 50 bourbons and a well-trained staff but, truth be told, there’s not a bar in Louisville that will disappoint a bourbon lover.

Michter’s, the venerable Pennsylvania brand that was revived in Louisville in the 2000s, uncorked the current boom in 2011. Visionary owner Joe Magliocco purchased the distinctive 1890 Fort Nelson building, with its stone façade and distinctive turret, with the intention of producing whiskey downtown. Magliocco’s labor of love required years of architectural agonizing and untold investment, resulting in a building within a building that is finally equipped to produce whiskey and entertain visitors. During Fort Nelson’s seven-year rehabilitation, other companies snapped up properties for downtown distilleries of their own. Among the eight distilleries within a thirteen-block stretch are craft outfits like Kentucky Peerless, as well as giants Evan Williams and Old Forester. 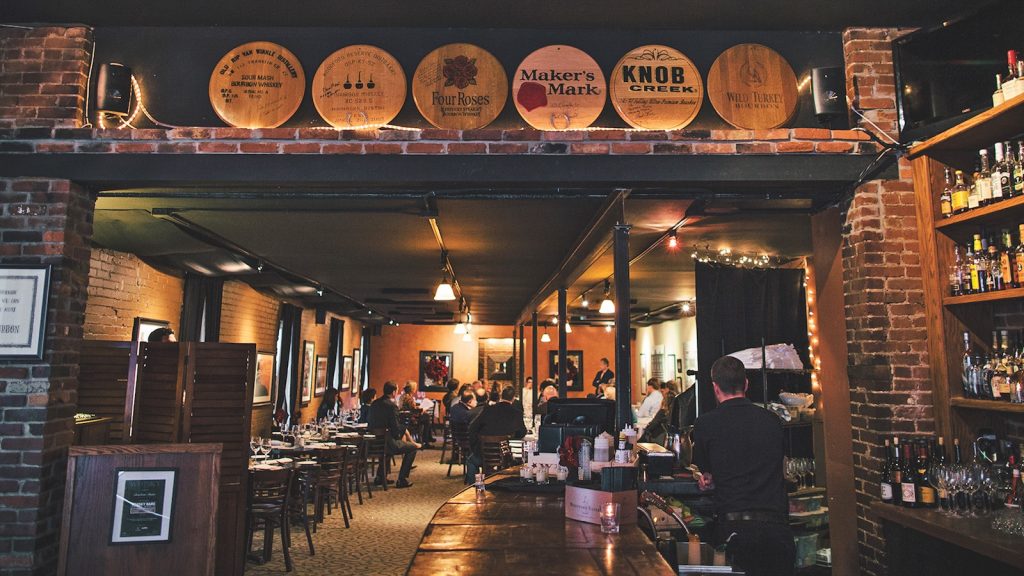 With more than 100 bourbons to choose from, including many private-barrel picks, Bourbons Bistro is a must-visit for whiskey travelers in Louisville.

If bourbon is America’s whiskey, then Louisville is the American whiskey capital. Visitors can drink with the ghost of Al Capone at the Seelbach Hotel, taste an Old-Fashioned in its city of birth, and soak up the whiskey legends that locals are all too happy to share. Kentucky-born Andrea Wilson, a moonshiner’s granddaughter who is now Michter’s master of maturation, feels it: “The stories, the characters, the history, the heritage behind American whiskey is something that really comes to life with Kentucky bourbon.”

Bourbon is everywhere—in bourbon truffles (at Art Eatables), barrel-aged spices and soy sauce (Bourbon Barrel Foods), and bourbon-infused marshmallows, mustard, ice cream, and popcorn (found throughout town). You can take a class to learn how to cook with bourbon or visit Brown-Forman’s cooperage to watch oak trees become barrels. If you’re a purist, just sip your way through town.

You know it’s serious when the Frazier History Museum, devoted to Kentucky’s past, cedes much of its third floor to “The Spirit of Kentucky,” a permanent exhibit on bourbon history. The museum is also the official welcome center for the Kentucky Bourbon Trail. “It is our story. It is part of the culture of this state,” says Andy Treinen, the museum’s vice president. “It tells the story of why Kentucky is the home of bourbon. Its history has to do with the water, with the land, the limestone shelf.”

Louisville is also the launchpad to bourbon country at large. It’s a typical Friday morning at the Seelbach, as thirsty travelers board a Mint Julep Tours bus to head east toward Woodford Reserve, the first of four stops of the day.

Sean Higgins, who launched Mint Julep Tours in 2008, now commands a fleet of 28 vehicles for daylong tours, which sell out regardless of the season. Back in 2008, downtown wasn’t on his radar. “There just wasn’t enough tourism activity,” he says. Now, with downtown hopping, “We’ve got access to the best distilleries, the best master distillers, and the best in the industry that have all invested in downtown Louisville.”

As convenient and educational as that downtown cluster of distilleries is, a truer taste of America’s greatest whiskey city is found in its neighborhoods. Hail an Uber and head for the bars and restaurants in the Highlands, Germantown, or Crescent Hill. Even in the brewpubs, you’ll find a nice whiskey selection—and nice people. 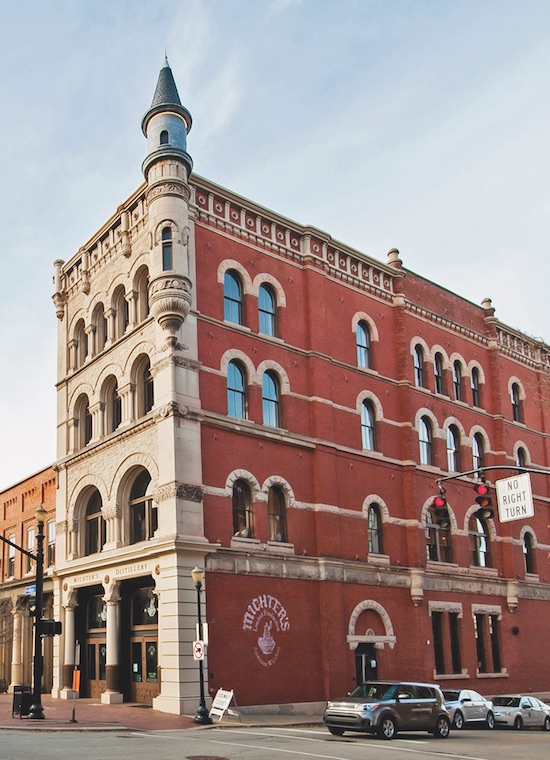 The Michter’s Fort Nelson Distillery inhabits a historic building in downtown Louisville, complete with a turret.

Bourbons Bistro, in the historic Clifton neighborhood, is one of the five original stops on the Urban Bourbon Trail. Jason Brauner opened the doors in 2008, when a restaurant with an extensive bar of bourbon selections seemed, well, optimistic. Eleven years later, Bourbons Bistro continues to excel in serving artfully plated dishes paired with curated bourbon flights. The backbar evokes a distillery, with barrel heads and vintage ceramic decanters from the 1970s displayed alongside old photographs.

Whiskey Dry opened last year in the middle of Fourth Street Live, a covered downtown venue offering live music and general partying. There’s nothing parochial about Whiskey Dry—alongside Kentucky’s finest it offers a wide selection of world whiskies. The whisky list is organized by region, from Kentucky (Bardstown or Clermont, say), to Scotland (Islay, Campbeltown). There are whiskies from India, Taiwan, and South Africa. Every bottle spanning the large backlit bar is open and ready to pour. A locked cage holds the rarest pours and bottles for sale, including an Old Rip Van Winkle 15 year old from 1989 (yours for just $4,200).

On a busy Friday night, bartenders work with rapid precision, mixing a triple batch of Old Fashioneds with Henry McKenna bottled in bond, then cracking a fresh egg and shaking the white for a frothy Whiskey Sour. They plunk a glazed doughnut on the rim of a Coffee & Donut cocktail—cold brew, condensed milk, and bourbon. Waitresses deliver flights of whiskey on barrel staves, a slip of paper woven between the fluted glasses describes each pour in the lineup. The whir of the mixer announces the birth of a Bourbon Milkshake, topped with whipped cream, wafer cookies, and a toasted marshmallow. After some deliberation, a flight attendant on a layover orders Wild Turkey 101 on the rocks. “I’m more of a scotch guy,” he says, “but when in Rome…”