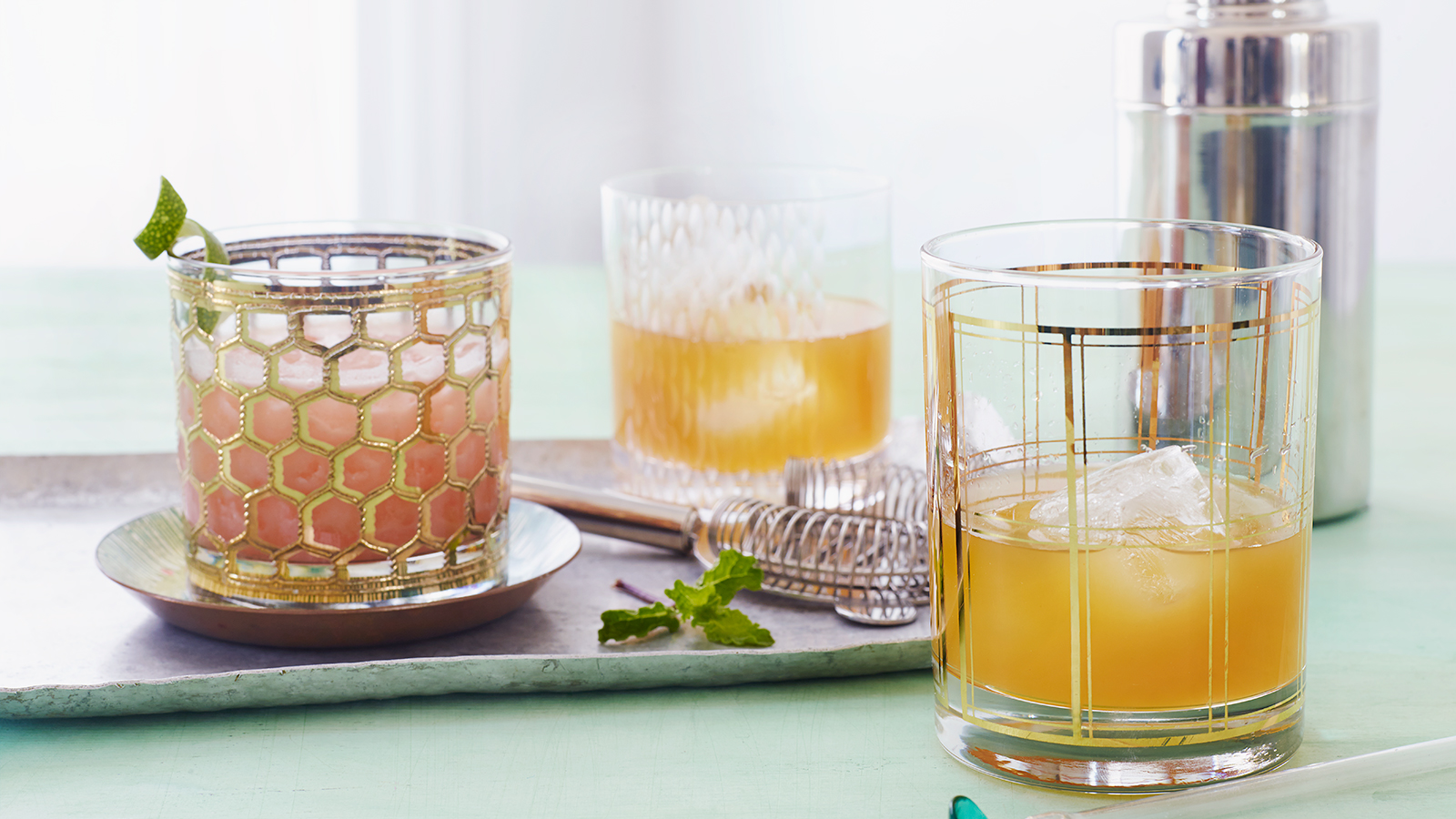 For many Americans, the Mint Julep they hoist on Derby Day each May celebrates the most exciting two minutes in sports, while simultaneously marking a seasonal farewell to whisky. Having satisfied the ritual of frosty silver cups and sugar-dusted mint leaves, many will soon push their bourbon toward the back of the bar, reaching for white spirits like rum and gin, until it’s once again time to rake the leaves and relax by the fire. Of course, there are whisky cocktails that are suited for summer, standbys like fizzy Scotch Highballs or the Reagan-era Lynchburg Lemonade. But in order to really embrace whisky when the heat is on, we’re searching for new recipes and rituals, irreverent though some may seem. These bartenders have bold ideas for the coolest ways to savor whisky this summer, straight through Memorial Day, the Fourth of July, and beyond.

Julia Momose, head bartender at GreenRiver in Chicago, credits a cocktail list that categorizes drinks by their raw ingredients with helping her to free many distilled spirits from their traditional roles. “Rye is a fun category because it includes both whiskey and Belvedere vodka, so by looking at spirits from an ingredient perspective I was inspired to play a bit more,” says Momose.

Her Lincoln Park cocktail is an inventive riff on the Piña Colada, using jasmine-infused Glenlivet and topped with an aromatic misting of smoky Laphroaig single malt Islay Scotch whisky. “Glenlivet 12 year old is delicate with apple and fruit flavors. The jasmine really pulls out those higher notes, so the whisky plays well with rich, creamy coconut and bright lemon juice. It is just a texturally fantastic drink,” says Momose, noting the addition of bitter Cappelletti helps to balance an otherwise sweet cocktail for the whisky lover. Like many summer whisky cocktails, the Lincoln Park is a two-way street—a vehicle for whisky in the summer, and equally appropriate as a tropical escape on a cold winter night.

For a simpler version on the same theme, Mitch Bushell, former beverage director at Westbound in Los Angeles, advises taking your favorite blender Piña Colada recipe and substituting Monkey Shoulder blended malt Scotch whisky for rum, then lightening the whole thing up with a splash of coconut water. This summer, Bushell plans to unveil refreshing bramble-style whisky drinks, combining equal parts Chinese mulberry vinegar, choice of St. Germain liqueur or Aperol, and whisky, on ice, topped with soda. Bushell credits his Australian bartending heritage with helping him take whisky beyond its traditional cocktail roles. “A lot of American bartenders grew up making Manhattans. We are such a juvenile culture, only 125 years old, so we are ready to party with whisky,” says Bushell, noting that one of the most popular summer drinks in Australia remains Rye and Apple. “Any decent bar in Australia has a juicer on the bar; Granny Smith apple juice and chuck an ounce of rye in there, and that’s refreshment,” says Bushell.

Get the Recipes: Lincoln Park and Whiskey Mulberry Shrub 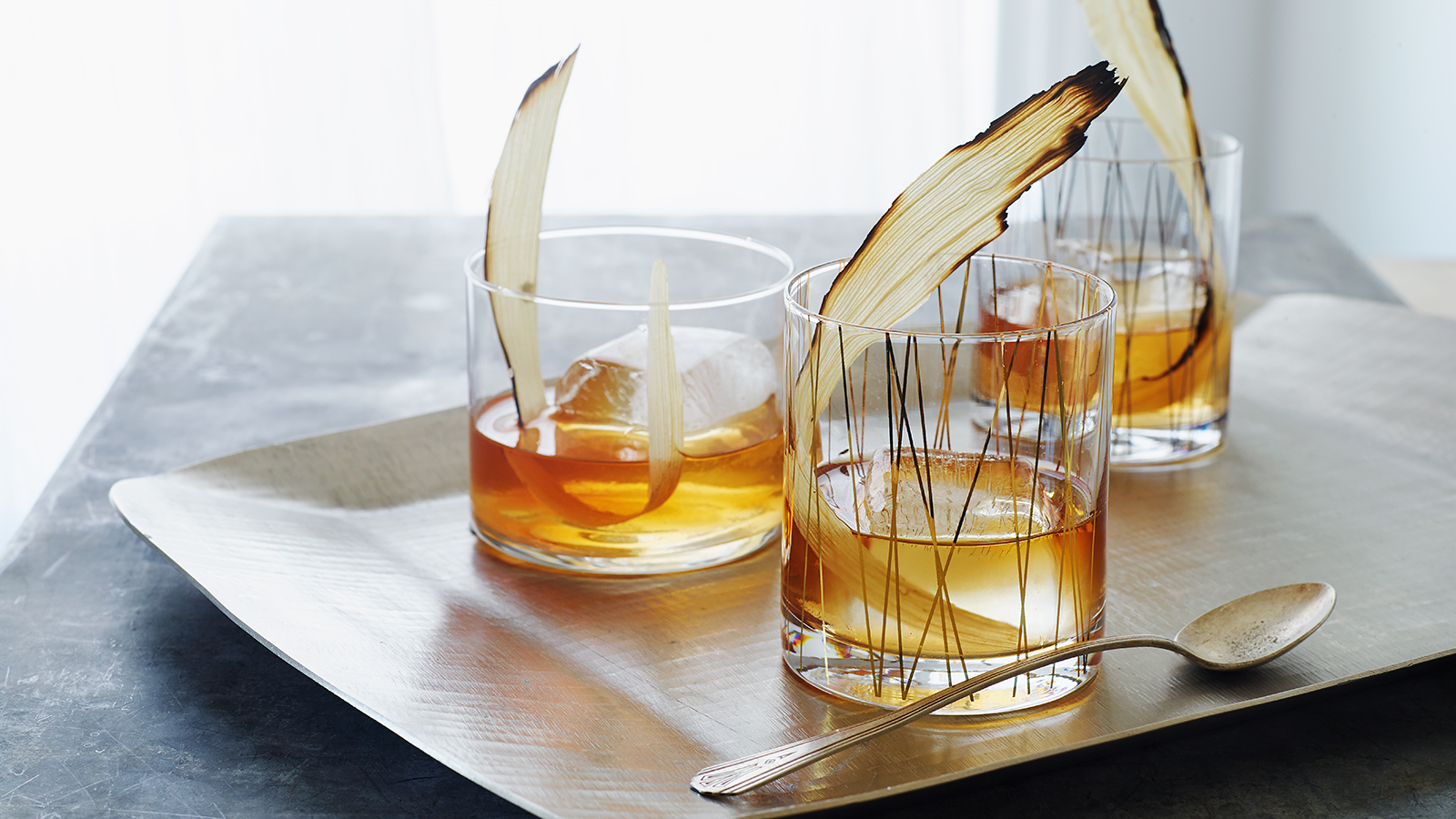 Cocktails that embrace seasonal produce are certainly not a new trend, but whisky aligns well with the occasional summer ingredient that simply isn’t a natural fit for other spirits, like sweet corn. Scott Koehl, beverage manager at Ada St. in Chicago, concocts a summer whisky drink dubbed The Nine Pound Hammer that portends it is no lightweight. “This is a drink for people who might normally take whisky neat, but celebrates one of summer’s most prized ingredient by using a bit of corn sweetness to tone down barrel-strength whisky,” says Koehl, who took inspiration from a classic Old-Fashioned cocktail and the chef’s use of summer sweet corn to infuse 1/4 cup of whole grain, dried local sweet corn in a bottle of Booker’s bourbon. “Corn is not exactly refreshing, but it really softens all the edges and makes a potent spirit super mellow,” says Koehl, who completes the cocktail with a charred corn husk garnish, which adds a hint of smoke, redolent of a summer barbecue.

When it comes to more traditional summer seasonal ingredients, Rick Wells, beverage director at BLT Steak NYC in New York City, says stone fruits and plump berries are not the strict domain of Mojitos and Margaritas in his bar. With whisky cocktails, however, Wells advises turning to fruit purees or jams, noting they pack the concentration of fruit intensity to stand up to the spirit.

Inspired by the current popularity of the Moscow Mule, Wells proffers a Georgia Mule. “You could call it a buck—a 19th century combination of spirit, citrus, and ginger beer—but people can readily relate to a Moscow Mule; the drink is actually inspired by Southern peach tea,” says Wells. His Strawberry Patch Smash, made with strawberry jam and fresh mint, marries elements of both a sour and a julep. “Sometimes selling a whisky cocktail in the summer requires some gentle steering, but once people taste it they realize they can enjoy their favorite whisky and have a refreshing drink,” says Wells.

Get the Recipes: The Nine Pound Hammer, Georgia Mule, and Strawberry Patch Smash 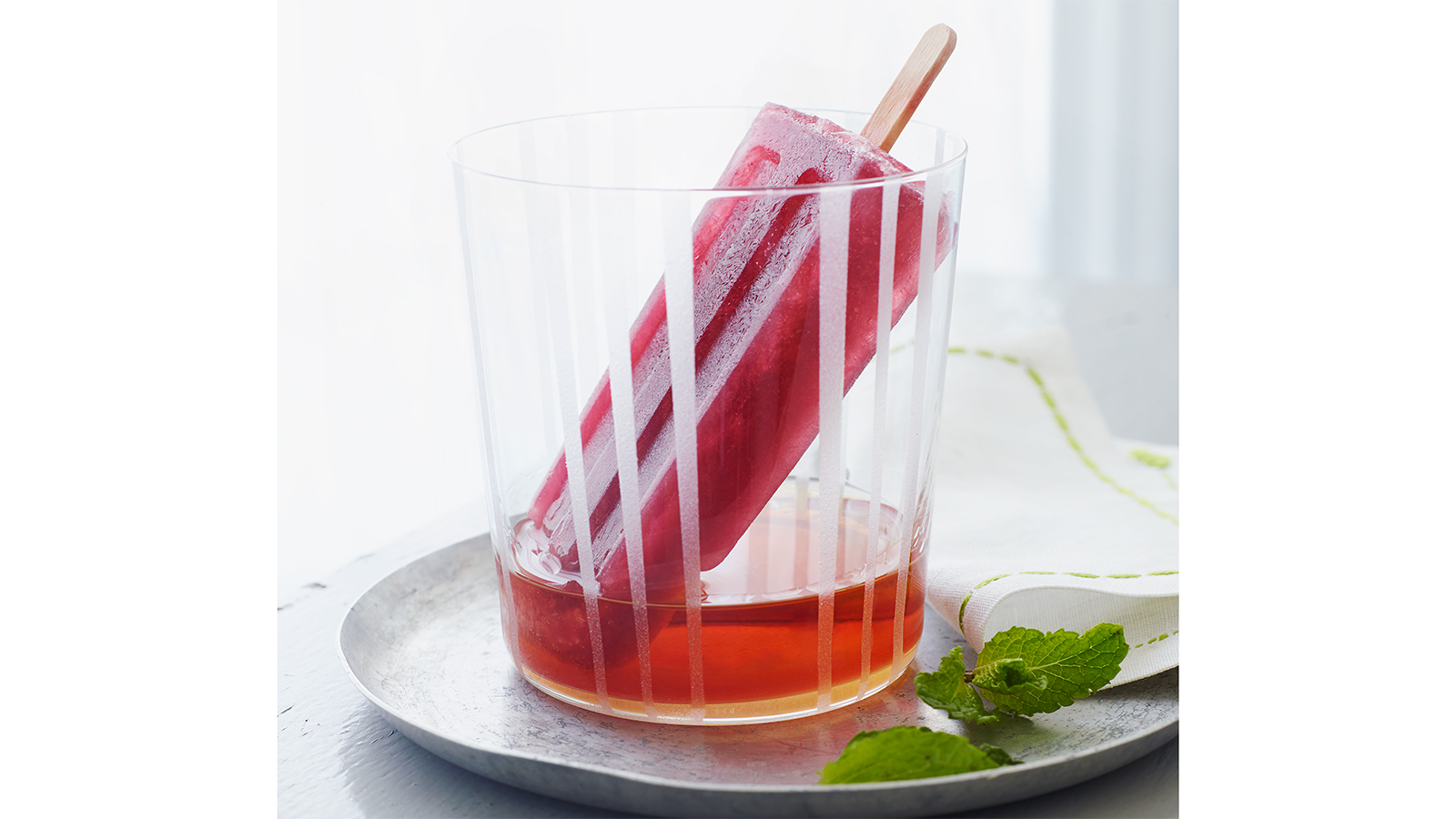 One of the things that most shocked 19th century Europeans about our peculiar “American drinks” was our national obsession with copious amounts of ice. And the most successful summer whisky cocktails have plenty of it—except when they don’t. At Metropole in the 21c Museum Hotel Cincinnati, guests enjoy poptails, cocktails that replace “on the rocks” with “on the pop,” arriving with a house-made popsicle in the glass. Conceived to take whisky lovers out of their comfort zone while also bringing new converts to the spirit, Old Forester bourbon (86 proof) comes paired with a house-made strawberry-and-mint popsicle. “It takes a dark spirit and turns it into something you can enjoy by the pool,” says Melanie Tapp, food and beverage director. The format also encourages imbibers to develop their own drinking style. “I am a dip-it-and-lick-it person,” says Tapp. “Other people might finish the popsicle first, or stir with it. It’s not just a novelty, but actually a great drink that changes over time.”

Charlie Moore, head bartender at Knife in the Highland Dallas, says whisky never goes out of season at this classic steakhouse, and catering to their fan base, devotees of whisky and aged beef, the Highland Dallas will debut a slushy rendition of Jack Daniel’s Tennessee whiskey and Coke served from frozen drink machines poolside this summer. “I think when people realize it’s not just another frozen Margarita, they’ll be inspired to choose whisky where they might not otherwise.” No frozen drink machine? Moore suggests The Highland cocktail, his original variation on a highball, utilizing bright flavors of honey and lemon juice and the added complexity of house-made spiced pear cider.

The fewer ingredients a cocktail has, the more important each one becomes, and it’s safe to say that Andrew Abrahamson has left no bubble unturned in his fastidious perfection of the highball at Seven Grand in Los Angeles. “At its core, a highball is as basic as they come: soda water, whisky, ice, glass. But to really nail it, there is an incredible amount of detail and care that needs to go into picking each ingredient, and a deft touch when making it.” For the Japanese Highball, made with Hakushu 12 year old Japanese peated whisky, Abrahamson says he sought a whisky that was fresh and light, but rich enough to endure dilution. Seven Grand uses a laboratory freezer to reduce their ice to -40˚C, cold enough to shatter glassware if not handled carefully. Even for those using ersatz home freezer ice, which measures around -18˚C, Abrahamson says careful attention to the manner and degree of stirring, soda temperature, and glassware (he likes tall and narrow with straight sides) will vastly improve this cold drink. “If you are not in the mood to sip it neat, I think there are few better ways [than a highball] to enjoy your whisky, while still tasting and enjoying all the notes from the whisky,” he says, sharing his fastidious instructions.

Get the Recipes: Strawberry-Mint Poptail, The Highland, and Japanese Highball 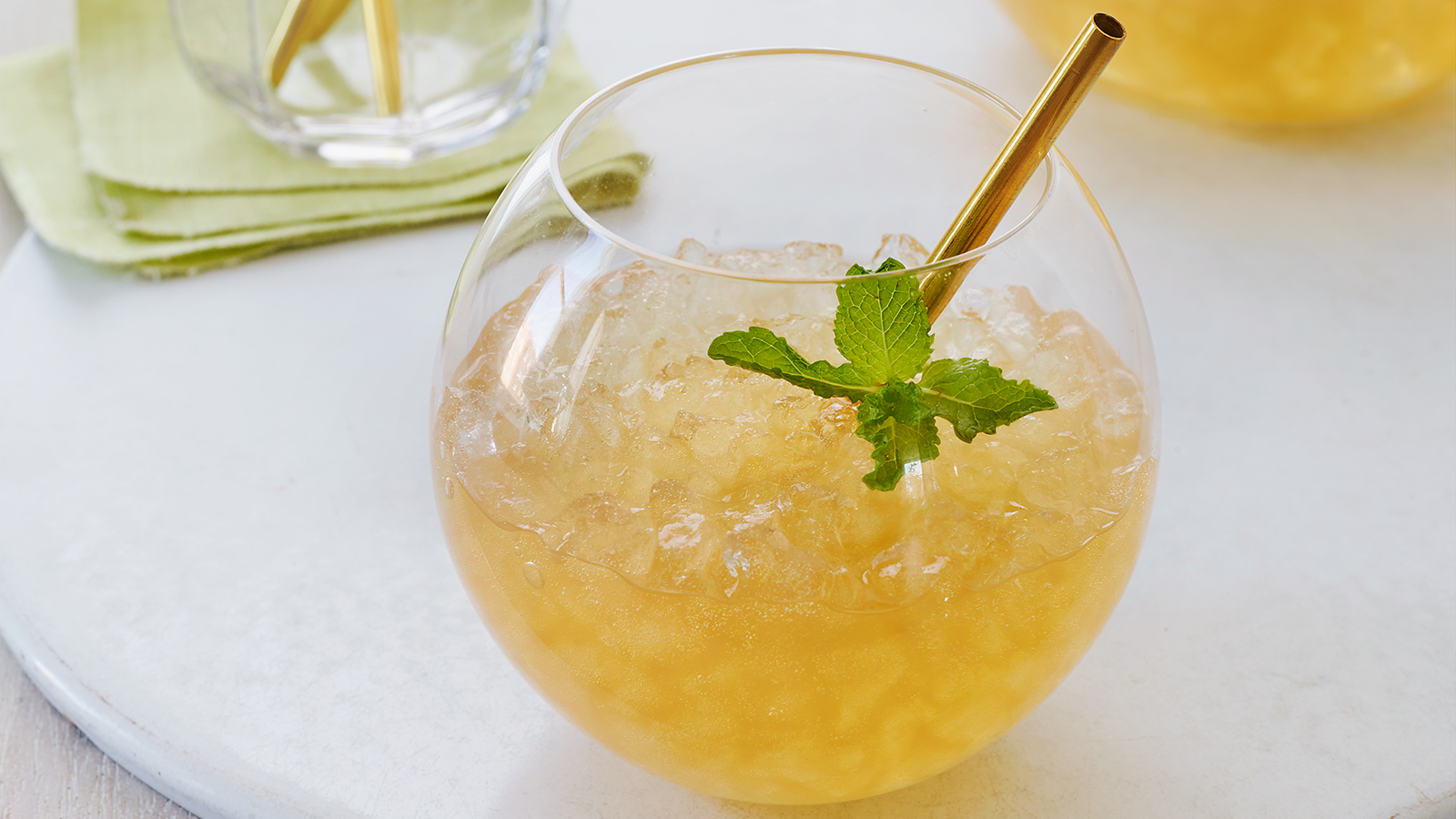 The earliest whisky cocktails—Old-Fashioneds and Manhattans —emerged as relatively petite, potent, and boozy drinks, able to be sipped down in a matter of seconds. But as the love of whisky grows, whisky drinks are taking on more convivial proportions. No longer the divisive spirit it was just a few years ago, bartenders have warmed to the idea that the whole table is likely to be whisky drinkers, or at least open to the suggestion. At Analogue in Chicago, Henry Prendergast, partner and bar manager, includes whisky in Analogue’s popular range of communal cocktails, served in fishbowls. “Communal drinking is especially popular in the summer and on our patio. But to be successful, communal drinks need to be accessible. We saw that people regardless of age or gender are not scared of whisky like they once were, so this is a way to get more whisky out there in a refreshing way,” says Prendergast, who denotes the fizzy drink as Fish Bowl No. 5.

Louis Hirsch, general manager of Morels French Steakhouse & Bistro, doesn’t let Las Vegas summers deter him from enjoying whisky: he’s known to replace tequila with whisky in a blender Margarita and reach for an Islay malt in his Mojito. Hirsch’s Whiskey-Gria adds a purely American twist on the resurgent Spanish sangria, with a mélange of fruit and rye whiskey that also smacks of that saloon staple, Rock and Rye. “I just moved into my new house, which has a pool, so Whiskey-Gria is on tap all summer,” says Hirsch, offering a recipe scaled for a raucous whisky-loving crowd. Sterling julep cups will never go out of style, but when it’s time for a more casual summer cocktail, your favorite whisky is perfectly at home chilling under a cocktail umbrella.

Get the Recipes: Fish Bowl No. 5 and Whiskey-Gria