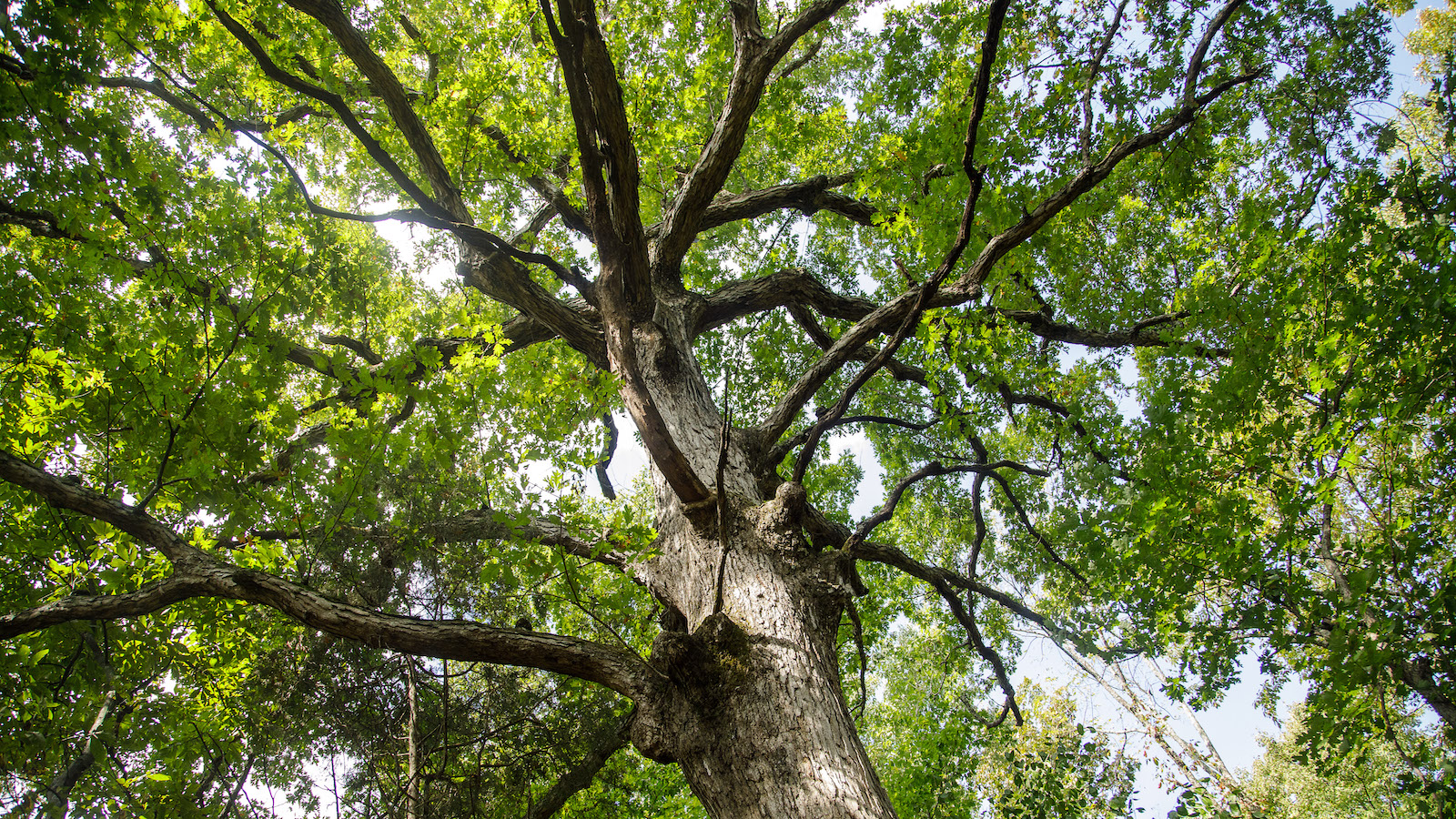 Maker's Mark has partnered with the University of Kentucky to sequence the genome of a white oak on its property in Loretto, Ky., aiming to gain more knowledge about sustaining the species.

Bourbon isn’t bourbon unless it’s aged in a new charred oak container; Kentucky’s bourbon distillers, in fact, filled 1.7 million barrels in 2018, the vast majority of them made from American white oak. The wood is a crucial part of bourbon’s identity and production, yet much about its biology isn’t well-understood. Fortunately, help is on the way. The University of Kentucky’s College of Agriculture is partnering with Maker’s Mark and Independent Stave Company to study the DNA of the white oak and learn how to best preserve and protect the species for future generations.

“The current supply of mature white oak is well-established, but the concern lies in the next generation of white oak not being able to make it into the canopy,” says Jason Nally, who oversees sustainability operations and environmental education at Maker’s Mark. The canopy is the upper layer of the forest habitat, and according to Nally, other tree species—such as maple and beech—can dominate it, blocking sunlight and giving white oak less room to flourish. Other factors, such as insects, disease, and the changing climate, can also prevent the oak from reaching full maturity. “If we don’t begin taking steps to solve this issue before it becomes truly problematic, the bourbon industry will eventually experience a barrel shortage, which will lead to an eventual decrease in production,” Nally says.

Nally works with Maker’s Mark to promote sustainable practices throughout the distillery and educate the public about its natural resources—one of which is playing a significant role in this new partnership. The distillery’s Star Hill Farm is home to a white oak over 100 years old, known as “46 Tree,” which is the first point of the study. University of Kentucky researchers have begun collecting acorns and grafts from the tree to investigate its DNA and learn how it has survived for so long, eventually aiming to map its entire genome and identify subtle differences within the species. The goal is to build up a knowledge base that can be applied across white oak forests which will assist with management of this important natural resource.

White oak is used across the entire whisky industry, but because of bourbon’s mandate for aging in new, charred oak, the wood is especially important to American distillers. As Nally points out, other whisky industries, such as Scotch and Irish, “permit the use of secondary and tertiary barrels”—often those very bourbon barrels that American distillers have just used. The urgency to supply new barrels for the bourbon industry is only further exacerbated by the time it takes white oak to mature—over 70 years, according to Nally. “Quite simply, if the entire bourbon industry does not work together to support healthy forest management initiatives, we cannot be sure that future generations will be able to enjoy bourbon in the same way that we all have been so lucky to enjoy now,” he says.

Given the crucial role that white oak plays in the whiskey industry, it’s not surprising that similar preservation efforts have been made by other distillers. Jack Daniel’s has worked with the University of Tennessee to do its own studies on white oak. In 2017, the White Oak Initiative formed to research and preserve the species. Among its partners—which span private businesses, educational institutions, and state government agencies—are the Kentucky Distillers’ Association, Sazerac (which owns the Barton 1792 and Buffalo Trace distilleries), Independent Stave Company, and Beam Suntory, the parent company of Maker’s Mark.

Though the research is pressing, Nally stresses that the vision of preserving white oak stretches across the next century—meaning a lot of the people involved in the project will not live to see the full results. “We recognize that the future is dependent upon us providing the next generation with the resources that they will require to prosper.”