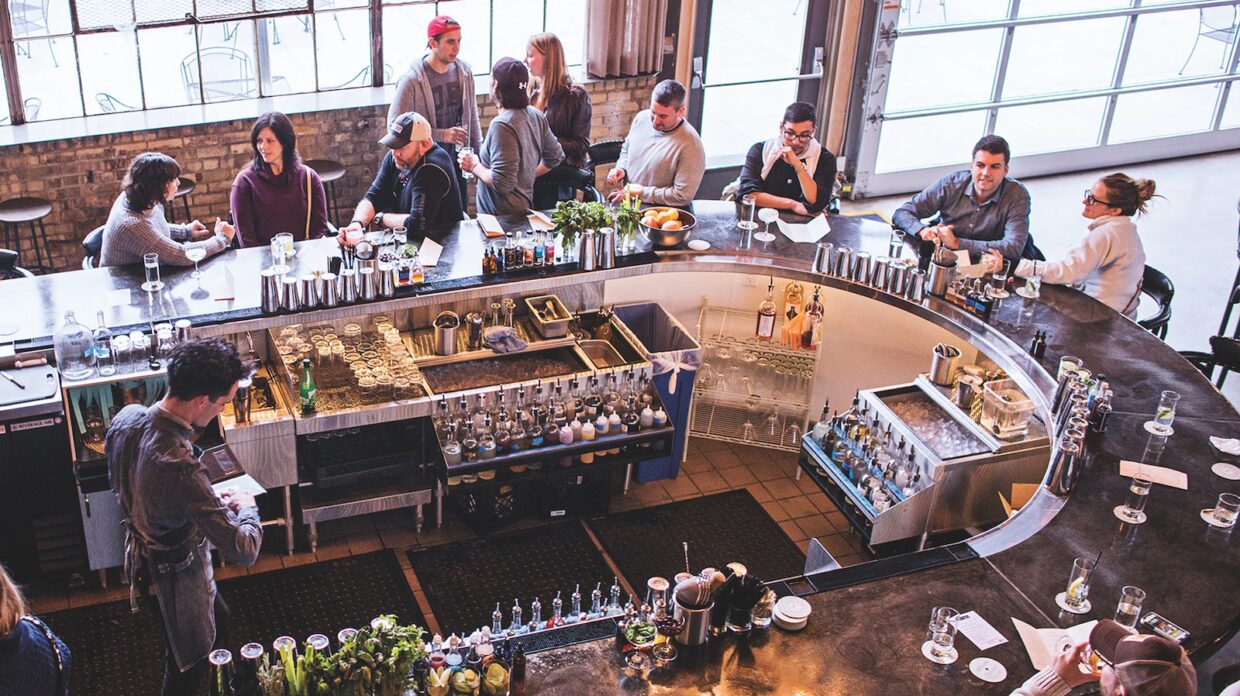 Tattersall Distilling offers a range of liqueurs and other spirits including bottled in bond bourbons and experimental limited editions. (Photo by Adam Kennedy Photogrpahy)

In the late 19th and early 20th centuries, Minneapolis was the flour milling capital of the world. No spirits enthusiast should write this off as mere trivia. Minneapolis’s legacy as the linchpin of America’s breadbasket is echoed in its local food and drinks scene today, and the city is also now a brightening star on the country’s whisky map.

Like most Midwestern cities, Minneapolis is a sprawling patchwork of neighborhoods. There are buses and a light rail system, and Nice Ride Minnesota is a dependable bike and e-bike rental service—although rideshare is the best bet for making optimal use of your time. Minneapolis is also a good walking city, except when a deep freeze sets in. Throughout its neighborhoods and riverside paths, antique signs and other vestiges of old immigrant communities can be spotted amid the trendy shops and restaurants.

The centrally located North Loop, on the edge of downtown, is an ideal home base for your stay. The Hewing Hotel is a stylish option—complete with a year-round rooftop sauna and a heated pool—that blends cozy Nordic lodge décor with an urban vibe. Luxurious Hotel Ivy–a circa-1930 building showcasing Ziggurat architecture and originally planned as a church–features deep soaking tubs in each room, a posh spa, and a connection to the city’s skywalk system. 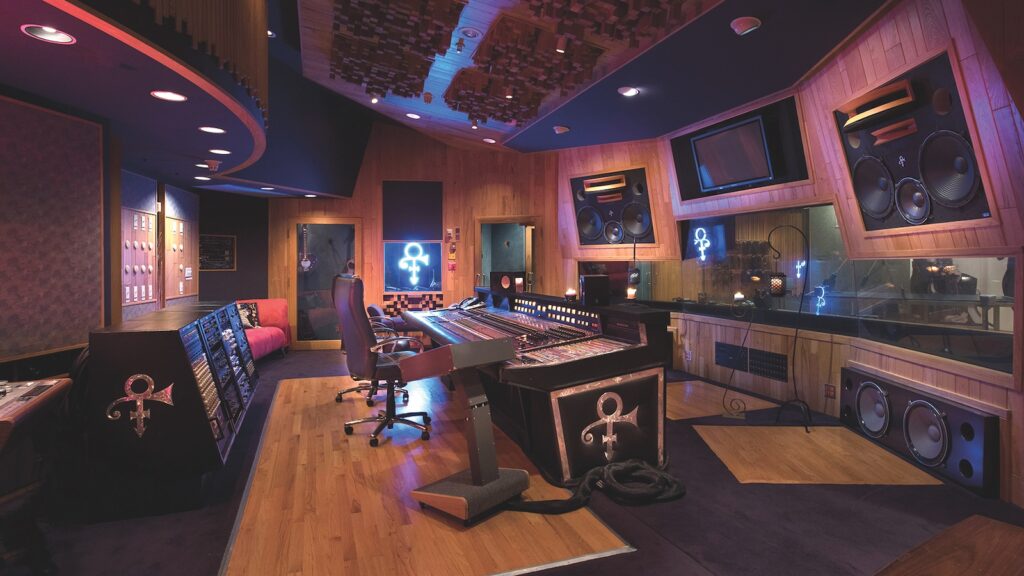 Fuel up at the North Loop’s farmhouse-chic Bellecour Bakery, owned by James Beard Award-winning chef Gavin Kaysen. The bakery’s name is inspired by the Place Bellecour—the central square in Lyon, France—and Kaysen’s pastries will transport you there. Get oriented with a walk through the Mill District, anchored by Mill City Museum, which is built within the citadel-like ruins of Washburn A Mill, once the largest flour mill in the world. (The plant was destroyed by fire in 1878, rebuilt in 1880, and became a forerunner of today’s General Mills.) Contemporary art fans might opt to visit Walker Art Center or travel 20 miles west of the city to Paisley Park, rock-soul-funk icon and native son Prince’s home and studio turned museum.

Wherever you end up, you’ll need to order a rideshare for lunch. Destination: Merlins Rest Pub, a classic pub featuring nearly 500 Irish and scotch whiskies, with the menu including owner Lee Tomlin’s engaging tasting notes. Choose from one of the impressive assortments of limited-edition Laphroaig and Arran bottlings.

If Merlins Rest Pub is an exercise in Irish whiskey’s past, O’Shaughnessy Distilling Company is a snapshot of what it could become. The O’Shaughnessy family recruited Brian Nation, longtime master distiller at Midleton Distillery (Irish Distillers), and High West founder David Perkins to develop Keeper’s Heart, a blend of whiskeys sourced from Ireland and the U.S. They’ll ultimately create American whiskeys in O’Shaughnessy Distilling’s three colossal pot stills, which you can admire from the distillery’s Keeper’s Heart Whiskey Lounge. Or grab a seat at the elegantly rustic upstairs Potato Bar, named for the potato processing plant that once occupied this stunning industrial space. 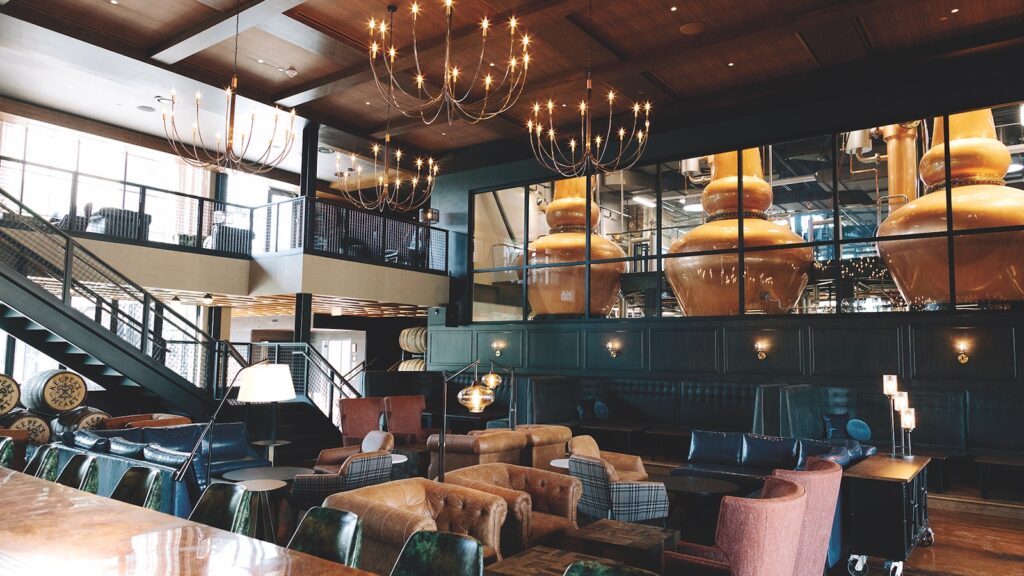 In Minneapolis’s evolving whiskey scene, Tattersall Distilling, founded in 2015, is the elder statesman. And it shows in its vast portfolio of exquisite liqueurs and other spirits, including bottled in bond bourbons (both wheated and high-rye) and experimental limited editions. This fall, Tattersall is moving most of its distilling operations to River Falls, Wisconsin, but the cocktail room, four miles north of O’Shaughnessy, will continue to be a destination. Try the Whiskey Sour—a piquant rye cocktail flavored with house orange crema, honey, and sarsaparilla.

Get some fresh air on the mile-long walk to Young Joni, for James Beard-awarded chef Ann Kim’s fascinating fusion of Korean and Midwestern American fare. The wood-fired pizzas alone make it a destination. Order a Bottineau—a Manhattan riff that uses aquavit as a nod to the region’s Scandinavian heritage. Wrap up the meal at the separate Young Joni Back Bar, which has the look of a 1970s-era basement rec room. That retro vibe is tempered by the progressive cocktail list. Whisky lovers will want to try the Around the World, a United Nations of drink that unites American rye and Japanese whisky with cognac, Luxardo, burnt sugar, and locally produced bitters.

Muster your remaining mojo and head one mile west over the river to Meteor. Once a very dark dive, it’s since been buffed up and turned into a retro-cool hangout with a punk attitude and excellent but unfussy cocktails, like the house Old Fashioned, made with bourbon and Spanish brandy. 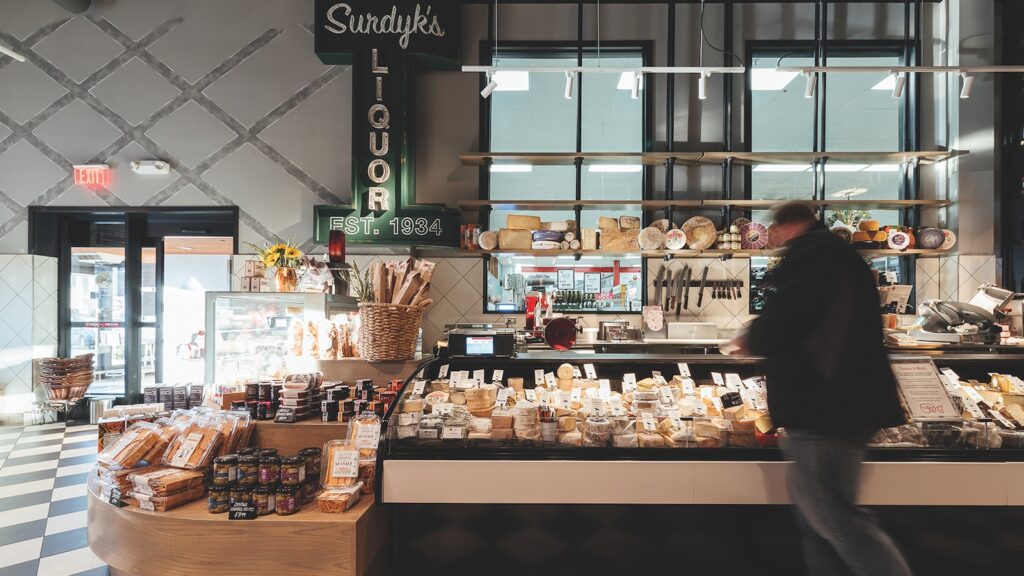 Rise and shine and head to the Hen House for a hearty breakfast prepared with locally sourced ingredients. Consider walking just a few minutes west to Haskell’s Wine and Spirits, an institution that originally opened in 1934, on the heels of Prohibition’s repeal, a few blocks from the current Minneapolis location. (Today it has 12 stores across the state.) Haskell’s is known for curating wines for dignitaries passing through, and even for the White House. Its hundred-plus whiskies include cask selections from WhistlePig and others. Then grab a rideshare to Bent Brewstillery, well worth the trip beyond the city limits. At this no-frills brewery, boundary-breaking spirits are made on a small still. Try the Rye2—rye whiskey finished in toasted pimento wood, which is traditionally used to make Jamaican jerk. In keeping with the creative theme, head back to Minneapolis and stop at Kieran’s Kitchen in the Food Building. Founded by Kieran Folliard, Irish ex-pat and founder of 2 Gingers and Red Locks Irish whiskeys, it’s a mecca for small food producers. Take a tour of the tenants: Red Table Meat Co., a salumeria; Baker’s Field Flour and Bread, which mills its own grains; and Alemar Cheese Company, one of the country’s rare urban cheesemakers; then visit the market for hyper-local provisions.

Get today’s dose of the outdoors with a half-hour walk south along the Mississippi River through Boom Island Park (keep your eyes peeled for the lighthouse) to Surdyk’s Liquor & Cheese Shop, a fourth-generation retailer. The sizable selection of Minnesota spirits includes products from Du Nord Craft Spirits, which has called off tours of its distillery in southern Minneapolis indefinitely. Its Mixed Blood whiskey is a blend of house-distilled high-rye bourbon and MGP rye, or pick up something from Loon Liquors and Far North Spirits, both of which make whiskeys with various heritage grains. Next door is the Surdyk family’s restaurant, Sidebar. Pause here for a drink, like a dram of local distiller Brother Justus’s “cold-peated” American single malt, and an appetizer; the green garlic fritters are a sure bet. 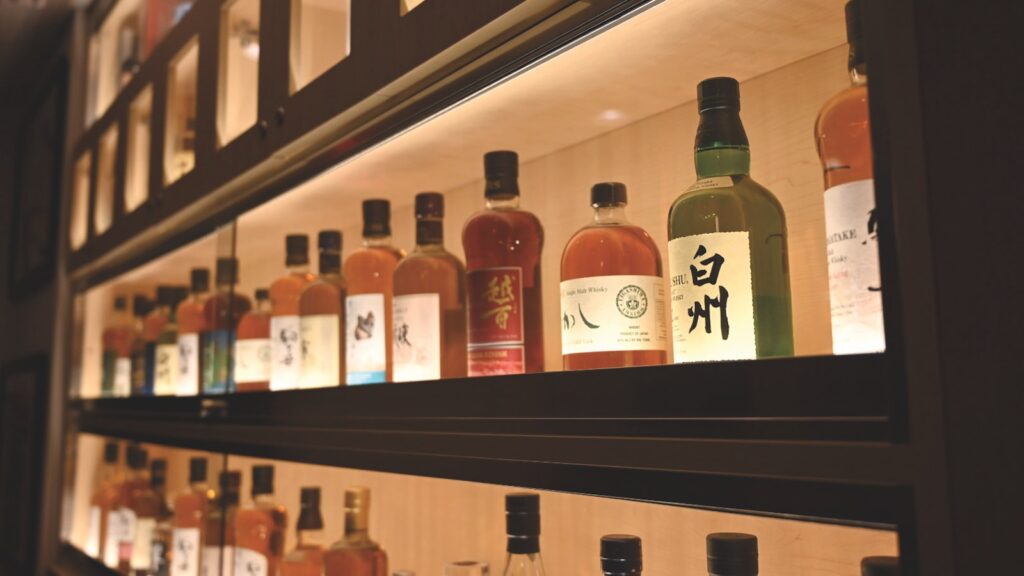 Enjoy some top shelf Japanese whisky alongside your meal at Billy Sushi.

Head back to North Loop for an aperitif at Gori Gori Peku, a dimly lit Japanese whisky bar staffed by knowledgeable bartenders who have mastered the art of hand-cut ice. Choose from the several dozen Japanese whiskies on offer; one of their Akashi expressions should tide you over. For dinner, hop downstairs to Kado No Mise for whimsical, freewheeling Japanese fare and cocktails like the Ikkyu Highball, made with Toki and shiso bitters. Other nearby dinner options include Spoon & Stable, Kaysen’s laid-back fine dining spot, where the bison tartare is an enduring must-try. The cocktail menu spotlights the classics, and the whisky list includes such gems as Buffalo Trace Antique Collection bottlings and Pappy 15 year old. Billy Sushi features magnificent gonzo rolls and a Japanese whisky menu that features the familiar, like Hakushu 12 year old, plus rare picks like Mars Komagatake Tsunuki Aging.

The Ivy and Hewing hotels each have an excellent bar for a nightcap. Constantine in the Ivy is a warren of niches outfitted with candelabras, organ pipes, stained glass, and more, to evoke a Gothic cathedral, plus an intimate room modeled on a Scottish hunting lodge. The range of 200-plus whiskies includes limited releases like Parker’s Heritage bottlings and Glen Garioch 1797 Founder’s Reserve. At Hewing Bar and Lounge, order a pour of their private selections from Knob Creek or Maker’s Mark, or a Highball flavored with grapefruit, cinnamon, and melon essences. If an Old Fashioned is your preferred drink, rest assured that they’ve mastered the recipe. In July of this year, the Hewing Bar cranked out 2,100 Old Fashioneds! Add that to the 1,200 made at the rooftop bar and there’s your proof that Minneapolis loves its whiskey. 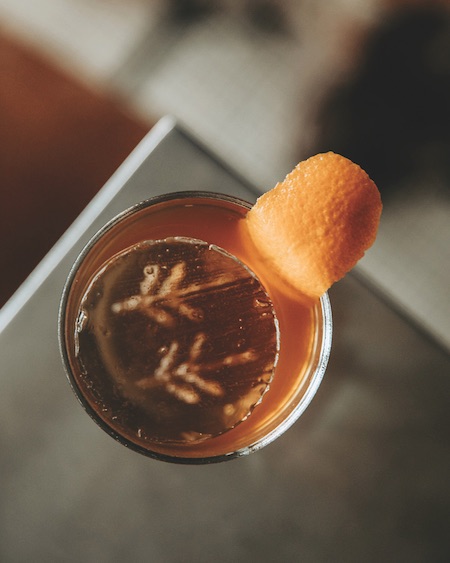 Grab a drink and a night’s rest at the stylish Hewing Hotel.