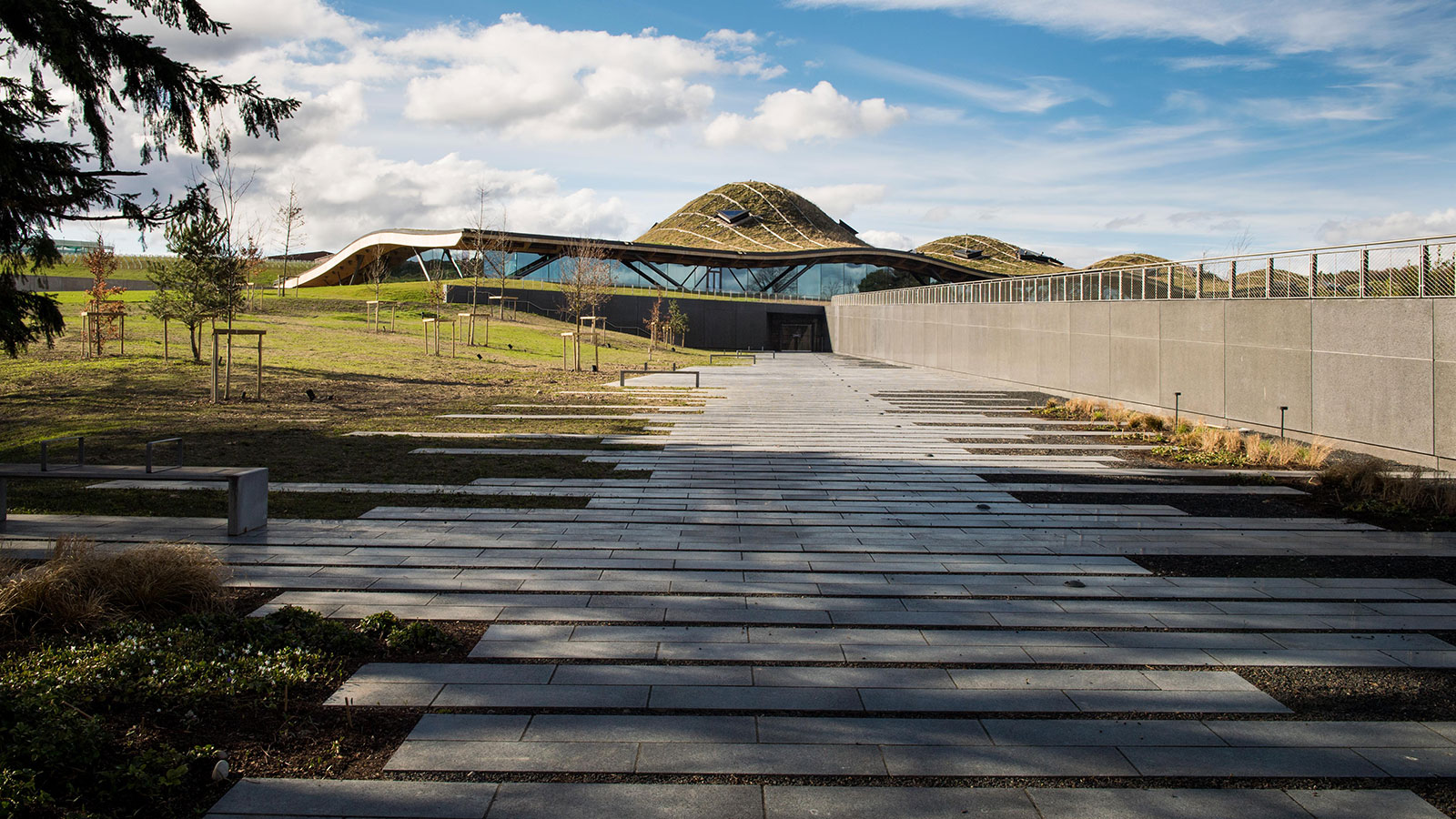 The new Macallan Distillery in Speyside, Scotland features an undulating, turf-covered roof that blends in with the landscape. (Photo by Ian Gavan)

Prep your glasses, Macallan fans: more of the iconic single malt scotch is headed your way. On May 22nd, parent company Edrington unveiled the new Macallan Distillery on the Easter Elchies estate in Speyside, Scotland, a project that has been years in the making. Boasting 14 stills—each a perfect replica of the stills used in the old facility, to ensure consistency of the liquid—the new distillery has the capacity to make an estimated 15 million liters of pure alcohol each year, about a third more than before.

It will take some time for that whisky to come of age, of course. In Scotland, the minimum aging requirement for whisky is three years, and most of Macallan’s core range is 12 years old or more. But with demand for its bottles growing continuously year after year, the company is clearly planning ahead. The whiskies will continue to be made with the same water source, barley, and cask types as before, and will age in Macallan’s 14 on-site warehouses.

Construction on the new distillery started in 2014 and took three and a half years to complete, but the payoff is big. Unlike its predecessor, and most other scotch distilleries, the new facility blends in seamlessly with the Scottish landscape—to the point that it can be hard to distinguish between its undulating, turf-covered roof and the green hills that loom behind it.

Inside, the distillery features both the expanded production facility and a visitor center, including a 4-D experience that shows how sherry casks are made in Spain, an interactive model demonstrating the distilling process, and a display of over 3,000 bottles highlighting the range of natural colors Macallan’s whisky takes on through cask maturation. An archive wall displays nearly 400 bottles dating from throughout the brand’s history.

Tours (£15) will be offered multiple times a day and will guide visitors through Macallan’s “Six Pillars,” or core foundational processes. Eventually VIP tours will also be available. There’s an on-site shop with lots of bottles for sale, and a restaurant serving local cuisine like Moray Firth crab and Scottish charcuterie. Best of all: the on-site bar, where each tour ends in a tasting of four drams, has plenty of bottles of Macallan to try, including expressions that are available only at the distillery. 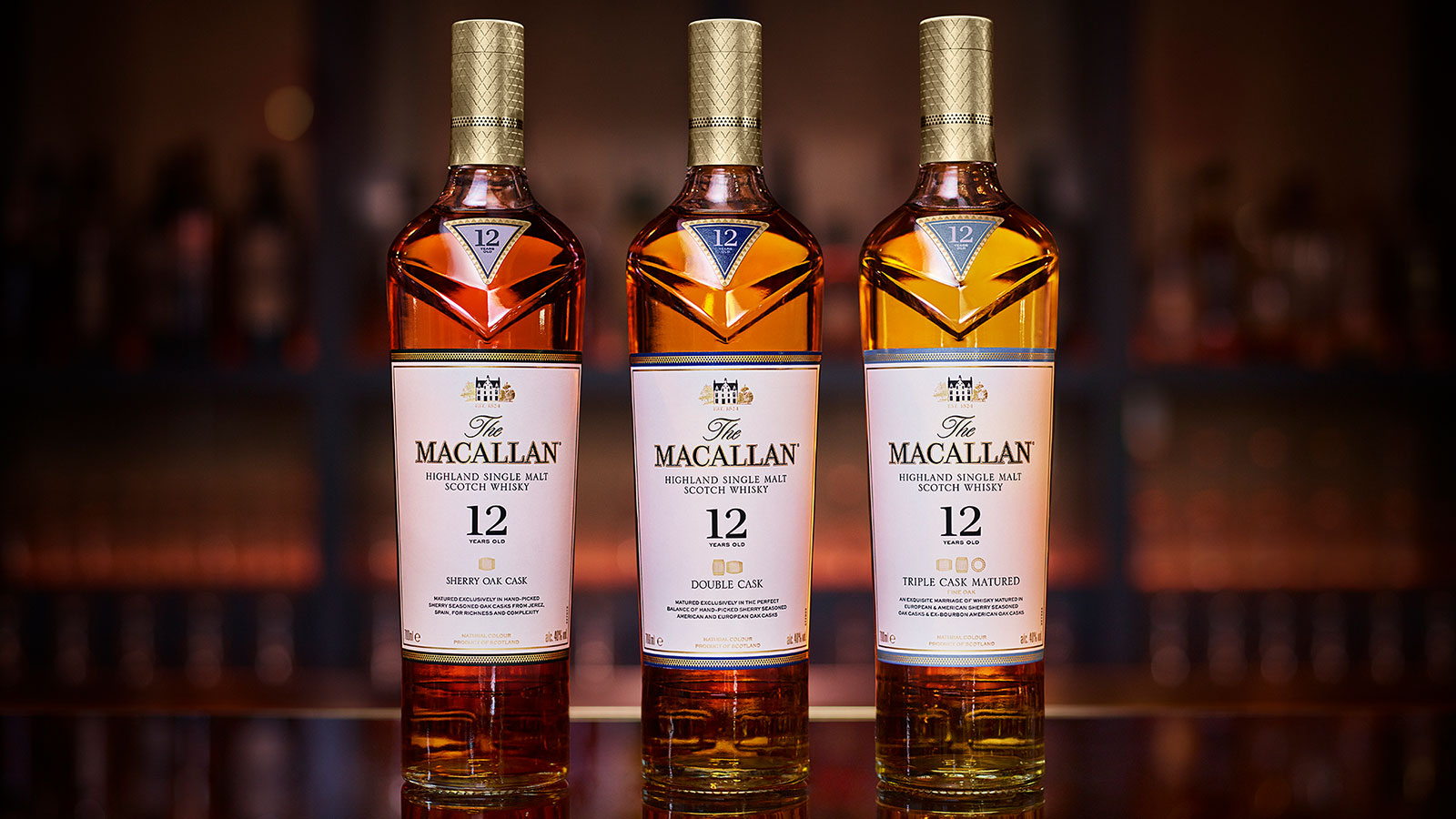 A New Look For The Bottles Too

Simultaneously with the new distillery’s unveiling, Macallan is revamping the U.S. packaging for its core lineup of whiskies—as well as renaming some of them. Macallan’s Fine Oak range will now be known as Triple Cask Matured, joining the Sherry Oak and Double Cask ranges to make up the distillery’s most widely available single malts. Previously, Fine Oak featured 12, 15, 18, 21, and 30 year old expressions, although 21 and 30 year old were discontinued in 2017 and 10 year old is not making the leap to the new branding. The Triple Cask Matured label will include the 12, 15, and 18 year old single malts, all exactly the same as they were when bottled under the former name.

On top of the name change for Fine Oak, the packaging across all three ranges has been modified slightly, but it will still be recognizable to Macallan fans. In addition to a different bottle shape and color-coding system that helps drinkers identify the cask make-up of each range, the new packaging includes anti-refill closures and anti-counterfeit technology—an increasingly important detail, in light of the fact that fake whisky—including fake Macallan—is a growing problem. No details about the anti-counterfeit technology are available currently.

As a final touch, Macallan has also unveiled its oldest whisky to date—a 72 year old single malt distilled in the 1940s and packaged in a custom Lalique crystal decanter. Dubbed the Genesis Decanter, the 42% ABV whisky will be released in August. Only 600 decanters will be available, with 156 coming to the U.S. at a cost of $65,000 each. Compared to the prices certain rare Macallans are fetching at auction these days, that’s practically a steal.