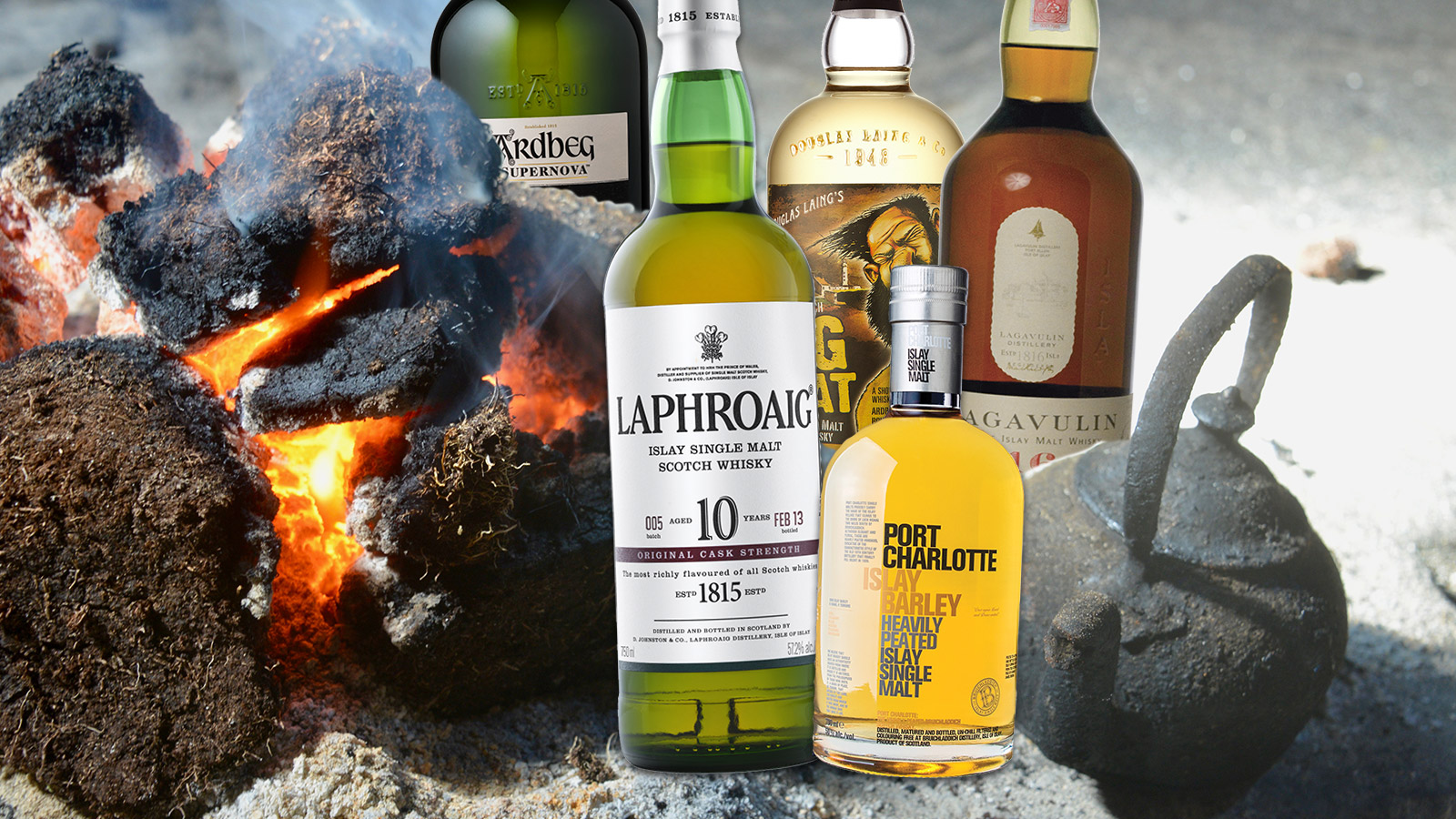 Peat is one of the most unique, expressive, and occasionally polarizing flavors encountered in whisky. The densely compressed, long-decayed vegetation was traditionally used as a fuel source in rural and remote parts of Scotland—so it was also used to dry barley during the malting process, thus imparting its signature smoky and medicinal aromas and tastes to the core ingredient of scotch. Peat-dried barley contains phenols, a class of chemical compounds that impart what we perceive as peated, smoky flavors. Phenol levels are measured in parts per million, or PPM—it doesn’t take a lot of phenol for us to notice.

Although it’s not for everyone, peated scotch is popular with a certain strain of whisky lover worldwide. Peat expresses a spectrum of flavors, many of them described in seemingly unpleasant terms like iodine, Band-Aids, bicycle tires, and gasoline. Peat heads are undeterred by these unsavory adjectives, as are the distillers and blenders who have pushed the boundaries of peat influence to the outer limits of ordinary tolerance. Just how far can you go? Below, we’ve rounded up the peatiest whiskies of Scotland. Strap yourself in for a gut-punch of a dram.

The Most Peated Whiskies Ever Made

Although PPM is widely used as a shorthand, it’s not the final arbiter of how peaty a whisky tastes. “PPM is the measure of what’s on the malt, as opposed to what ends up in the liquid,” says Brendan McCarron, head of maturing whisky stocks for Ardbeg and Glenmorangie. “Some whiskies use the same PPM malt, but with different levels of smoke due to distillation cuts, age of matured spirit, et cetera.” The way a whisky is aged can make a big difference in final peat levels, and perception matters more than a single number. “PPM is a big factor—the single most important, but not the be-all and end-all,” McCarron says. “A bit like age, it’s a great guide but can’t be the only factor.” That’s the case for Ardbeg Supernova, a sporadically recurring, very heavily peated release. “For Supernova, we do use some super highly peated malt, but also some casks that have just shown higher peating levels on the nose,” he says. The 2015 Ardbeg Supernova (91 points, $160), the most recent release, will also be hard to find, so snap it up if you see it.

There’s no need to despair if you don’t feel like chasing rarities or paying the triple-digit prices that triple-digit PPM levels command. Although Octomore and Supernova are the clear winners for the most heavily peated whiskies out there, plenty of other scotches have lots of peat and are much more widely available.

Octomore and Supernova both hail from Islay, and the island is famous for its peated whiskies. Some of the peatiest malts come from three distilleries on the island’s southern shore: Laphroaig, Lagavulin and Ardbeg. Most Laphroaig releases have a phenol level of 45 PPM, but the peat taste is most pronounced in Laphroaig 10 year old Cask Strength (88 points; around $70) and Laphroaig Lore (86 points; $125). Lagavulin—is peated to 35 PPM at the famed Port Ellen maltings using peat from Islay’s Castlehill Peat Bog. Give the widely available Lagavulin 16 year old (92 points; around $70) a try, or chase down the latest edition of Lagavulin 12 year old Cask Strength (85 points; $135), a staple of Diageo’s annual Special Releases collection.

Ardbeg uses malt that’s been peated to 50 to 55 PPM, generally the highest of the Islay distillers. Other than the hard-to-find Supernova, Ardbeg Corryvreckan (96 points, $85) is technically the smokiest whisky in the lineup, but Ardbeg 10 year old (93 points, around $55) actually tastes smokier on the palate. “Smokiness can be measured. Ardbeg 10 is the most perceivably smoky, but physically, the smokiest is Corryvreckan,” McCarron says. “Corryvreckan has a lot of French oak, so you perceive all these herbal and spicy flavors that compete with the smoke.”

Elsewhere on Islay, Bruichladdich’s Port Charlotte range features consistently high peating levels (whiskies bottled under the Bruichladdich name itself, however, are unpeated). Try the Port Charlotte 2008 Islay Barley (90 points; around $75), which has a phenol level of 40 PPM and is made exclusively using barley grown on the island. Caol Ila 12 year old (89 points; $60) is a good illustration that phenol levels aren’t everything—the whisky is heavily peated, with a phenol level of 35 PPM, the same as Lagavulin—but it tastes noticeably less smoky than its neighbor.

Many blended whiskies and blended malts feature a little Islay whisky to add some smokiness, but a few blends put smoke first and foremost on the agenda. Most notable are Peat Monster (94 points; around $50) from Compass Box and Big Peat (90 points; around $60) from Douglas Laing, both blended malts. Big Peat is a blend of exclusively Islay malts—including Caol Ila, Bowmore, Ardbeg, and Port Ellen—while Peat Monster is Islay-dominated. Upgrade picks: the annual Big Peat Christmas Edition (around $70), which has never scored less than a 90 in the Buying Guide, and the Peat Monster 10th Anniversary Edition (92 points; $100), which was released a few years ago but can still be found online or on some store shelves.

While Islay is home to the world’s peatiest whiskies, there are many other options out there, including some made outside of Scotland, like Connemara (Ireland), Hakushu (Japan), and certain expressions from Westland (USA), and Amrut and Paul John (India). Peat lovers of the world, start exploring!