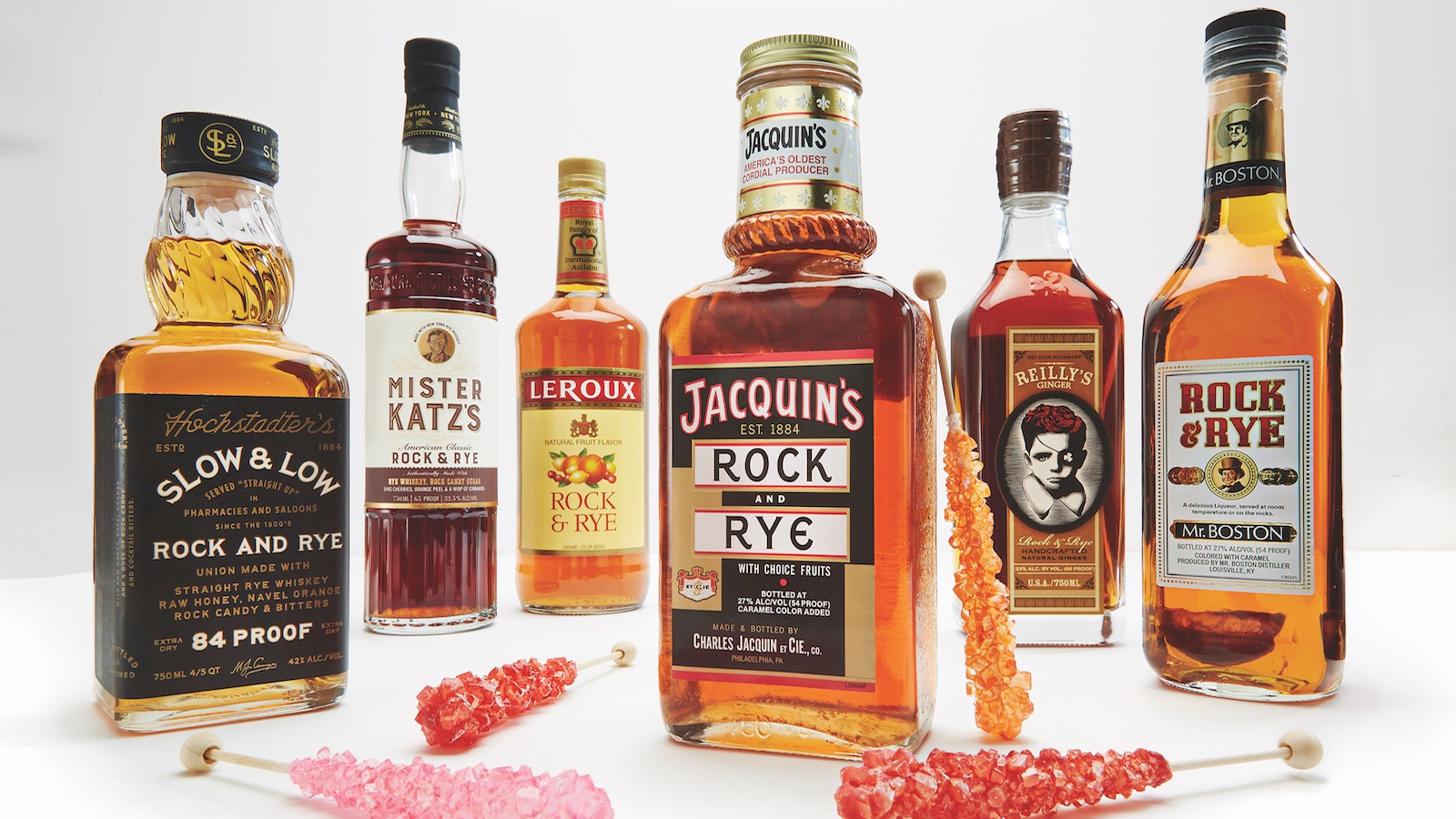 Rock and rye is every bit as peculiar as its name portends—a blend of citrus and rye whiskey sweetened with crystallized sugar, sometimes known as rock candy. But what’s even more unlikely is the sudden surge of interest in this whiskey liqueur with 19th-century roots. Spawned by the introduction of Hochstadter’s Slow & Low in 2013, more rock and rye revivals are joining the ranks of the few remaining holdouts, like Leroux, Mr. Boston, and Jacquin’s.

Oddly enough, rock and rye’s first role was as medicine. By the late 1870s, virtually every pharmacy in the nation was stocking their shelves with some proprietary recipe, often promoted as a sort of cough syrup. As a medicine, rock and rye was taxed at a lower rate than liquor, adding to the potential profit. In 1883, the drink was finally reclassified as a distilled spirit. According to the Alcohol and Tobacco Tax and Trade Bureau definition, rock and rye has a minimum 25.5% alcohol by volume, must be made with rye, straight rye, or whiskey distilled from a rye mash, and contain either rock candy or sugar syrup. The addition of fruit, fruit juices, or other natural flavoring is allowed, but optional.

Even after it became classified as a distilled spirit, rock and rye’s pursuit of pharmacopeia persisted. An 1891 advertisement for Tolu rock and rye in Chicago promoted its use “for coughs, colds, sore throat, bronchitis, asthma, pneumonia, consumption and all diseases of the throat, chest and lungs.” In some cases, “women’s issues” and cancer were added for good measure. To prop up such outlandish proclamations, a cornucopia of exotic ingredients made its way into rock and ryes at the turn of the century. Additives like cloves, balsam, and horehound were meant to evoke medicinal properties. While its medicinal claims were dubious at best, the sweet and potent amalgamation earned devotees.

“Rock and rye cures absolutely nothing…but it can taste great,” says Allen Katz, founder of New York Distilling Company and producer of Mister Katz’s rock and rye, a 65-proof blend of the distillery’s own rye whiskey with bing cherries and cinnamon bark. Without the need to make medicinal claims, Katz was free to reformulate his rendition for a modern palate. He worked with the Brooklyn Navy Yard to evaluate sixteen different types of sugar. Katz designed his rock and rye more like a bottled cocktail, and like many modern rock and ryes, it’s tasty on the rocks, in cocktails, or even as a shot, according to Katz. “The interest in rye whiskey has really opened the door to people being willing to experiment with rock and rye,” he says.

At least one region of the country never abandoned the spirit: Pennsylvania. For generations, Keystone Staters have sniffled their way to the state-controlled wine and spirits stores each winter to pick up Jacquin’s rock and rye. According to the Pennsylvania Liquor Control Board, 3,272,582 bottles were sold over the one-year period ending in 2017, making Jacquin’s rock and rye the third-highest selling spirit in the state. The red-hued, 54-proof spirit is similar to a ready-to-drink Old-Fashioned, with the added peculiarity of sliced fruit bobbing in the bottle. This local mainstay has been produced by Charles Jacquin et Cie in Philadelphia since 1884. It is only fitting that the national revival of rock and rye would be born in the one region that never truly gave up on it: Rob Cooper, the late creator of Hochstadter’s Slow & Low, was a member of the family who owns the company and worked there before going out on his own.

Today, newly minted labels such as Reilly’s ginger rock and rye are offering innovative formulations in a nod to the liquid’s pre-Prohibition origins, with one notable exception: you won’t spot any claims of medical benefits on these labels. You’re not drinking medicine, after all; just a swig of American history.

How to Make Your Own Rock & Rye

The combination of fruits in this recipe is historically accurate, based on extensive research. The Claey’s candy is the “rock” and provides a less bitter horehound flavor than the dried herb itself.

Directions
Add all ingredients to large jar and let sit, unrefrigerated. After about a week, based on personal preference, remove the cloves and cinnamon sticks. Adjust sweetness, if desired, by adding additional honey or simple syrup. Fruit can remain until you are ready to decant the concoction. Sediment forms from the fruits/spices and needs to be removed in order for the rock and rye to remain clear and visually appealing. You will want to decant more than once to achieve this.

Once removed, the fruit can be kept refrigerated in a closed container almost indefinitely, to enjoy as a boozy snack.