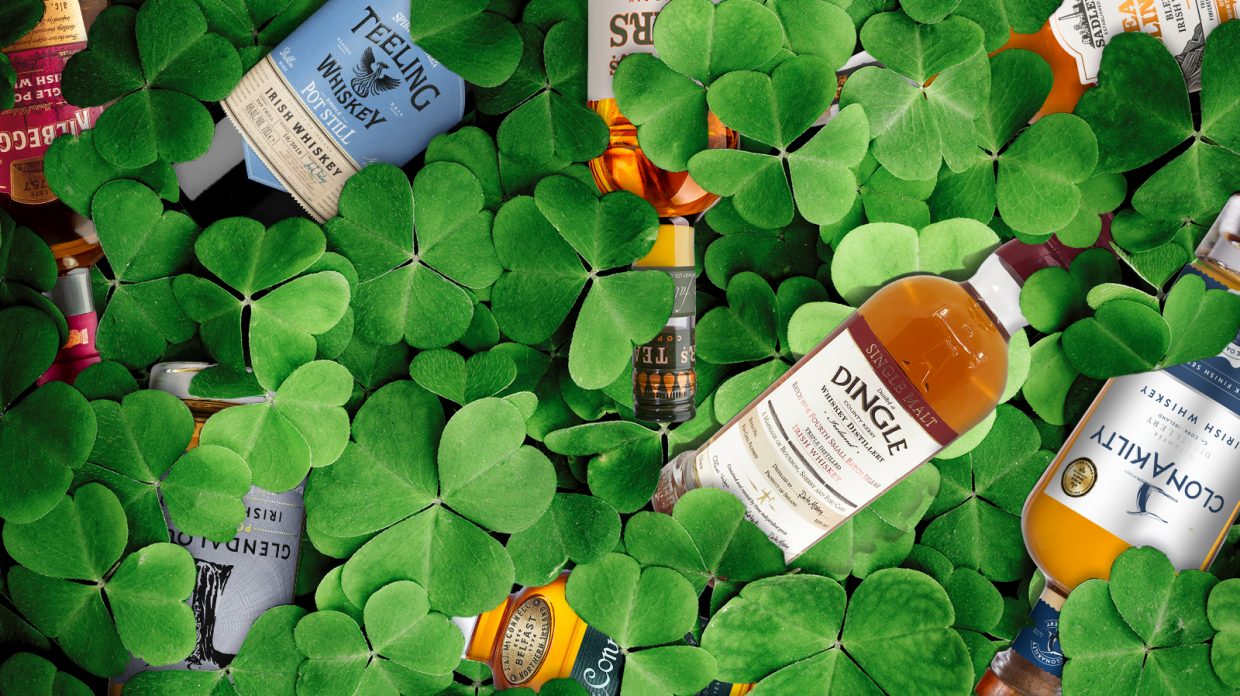 There are many ways to toast St. Patrick’s Day with whiskey—whipping up cocktails like a Whiskey Ginger or Hot Toddy with your favorite Irish whiskey, creating your own Irish cream, indulging in some Irish Coffee, or keeping it simple by sipping your spirit neat. And to that end, there are lots of new Irish whiskeys to choose from this year and plenty of ways to celebrate.

Just as it did last year, Jameson is teaming up with music artist Anderson .Paak to host a free St. Patrick’s Day concert in California. For details on how to attend, sign up for updates from Jameson. Meanwhile, Tullamore D.E.W. is bringing back its O’Everyone campaign, which allows fans to order a commemorative shirt featuring their own last name transformed with an O-apostrophe to sound Irish. This year, O’Everyone will also feature Irish pub pop-ups close to St. Patrick’s Day in Chicago, Denver, New York City, and Los Angeles. Update 3/16/2020: The Jameson x Meet Me At The Bar concert in Los Angeles, scheduled for March 15, has been postponed due to the ongoing and evolving COVID-19 situation. Though the new date hasn’t been announced yet, Jameson is offering fans a Drizly promotion that is valid until March 31, 2020. Use code SPD2020 to get $5 toward your first Drizly order.

But if you’re just looking for a solid Irish whiskey to toast the day, we’ve got you covered. Don’t know where to start? These are our top recommendations for Irish whiskey newbies. You can also check the Buying Guide for hundreds of Irish whiskey reviews, and keep reading for a roundup of several new releases worth seeking out.

Kilbeggan was dormant from the 1950s until 2007, and after reopening, the distillery attempted a single pot still whiskey made with a mixed mashbill that included 30% rye. While it was aging, the regulation for the single pot still style was changed to stipulate that grains other than malted and unmalted barley could comprise no more than 5% of the total mashbill, meaning what was in the cask no longer counted as single pot still—merely as whiskey. (It was released as Small Batch Rye, which scored 89 points in our Spring 2019 Buying Guide.) That wasn’t Kilbeggan’s only experiment, however, and the distillery is now releasing its first true single pot still—distilled from a mashbill of malted and unmalted barley, and 2.5% oats. Look for a review in our Spring 2020 Buying Guide, on newsstands next month.

Midleton’s Dair Ghaelach series is all about Irish oak, with each release of single pot still whiskey being finished in casks made of wood sourced from different forests throughout the country. For this year’s release, Midleton selected trees from Knockrath Forest in County Wicklow, sending the wood to Spain for seasoning, coopering, and toasting. Once the casks returned to Ireland, they were filled with single pot still whiskey aged between 13 and 26 years and left to finish for two years. Midleton’s previous Dair Ghaelach expressions, Grinsell’s Wood and Bluebell Forest, scored 90 points and 95 points, respectively, so we have high expectations for Knockrath Forest.

The whiskeys in this blend are sourced and then blended by Michael Walsh at Boann Distillery in the Boyne Valley of Ireland. The name references the two casks the blend is aged in—bourbon and oloroso sherry. Double Oaked is widely available and can serve as a companion to The Whistler’s other new products: a honey-flavored whiskey and an Irish cream made with single pot still whiskey.

This whiskey has no relation to the BBC television show of a similar name, though they are both named after the 19th-century Peaky Blinders gang that inhabited Birmingham, UK and were known to frequent the bar Sadler’s. The whiskey is triple-distilled in West Cork and matured in bourbon casks.

Redbreast’s newest core expression is also its oldest, and one of the oldest single pot still whiskeys ever to hit the shelf. Redbreast generally scores high in our Buying Guide—the 12 year old and 21 year old both scored 96 points, while Lustau scored 93 points and the 15 year old scored 92 points. It’s not a stretch to expect the oldest in the line—which is aged in bourbon, sherry, and ruby port casks—to continue the trend. Stay tuned.

The third permanent expression in the Writers’ Tears lineup debuted in 2019 to much acclaim, earning 92 points and the No.-10 spot in our 2019 Top 20, the highest for any Irish whiskey that year. Single pot still and Irish single malt are blended together to create this whiskey, which is then—as the name suggests—aged in two different types of barrels, bourbon and French oak cognac.

This whiskey was distilled at West Cork, and is Glendalough’s first pot still offering. What sets it apart from other pot still bottlings is that, after maturation in bourbon casks, Glendalough finished it in virgin Irish oak casks. Since this is a single-cask whiskey, each bottle is labeled with cask information—even the individual tree that supplied the wood. This isn’t Glendalough’s first experiment with lesser-used woods; in 2018 the brand debuted a single malt finished in mizunara oak casks that earned 91 points and the No.-18 spot in that year’s Top 20.

The original McConnell’s went out of business in the mid-20th century, along with many other Irish whiskey brands, during the time when distilling in Ireland was in severe decline. Conecuh Brands is reviving McConnell’s, and coming out the gate with this blend of malt and grain whiskeys, distilled at Great Northern Distillery and aged for five years in bourbon casks. Conecuh has more plans for McConnell’s in the works, including building a distillery in Belfast.

Though a limited release, this whiskey should still be on the radar for fans of cognac cask-finishing. Only 5,995 bottles of Egan’s Centenary were released back in November, and it scored 91 points in our Fall Buying Guide. The whiskey’s name commemorates 100 years since the death of namesake Henry Egan.

This is the first Teeling whiskey release in the U.S. that was made at its Dublin distillery, which opened in 2015. Though only 6,000 bottles were released this year, Teeling plans to expand availability in the future. The whiskey is matured in first-fill bourbon, sherry, and virgin American oak casks, and it’s reviewed in our Spring 2020 issue, on newsstands next month.

County Kerry-based Dingle Distillery began making whiskey in 2012, and this single malt is its latest release. It was triple-distilled and matured in a combination of bourbon, port, and oloroso and Pedro Ximénez sherry casks. The 2019 release, Batch 3, scored 89 points in our Buying Guide, while this release scored higher, earning 91 points. Former Glen Moray master distiller Graham Coull recently took the reins at Dingle, and we’re eager to see if the quality of these releases continues to rise on his watch.

Water is key at Barr An Uisce—“uisce” means “water” in Gaelic, and the brand puts a strong emphasis on proofing down its whiskey with Wicklow water. This blend of 79% grain and 21% single malt whiskeys, all aged three to four years, was finished for three months in oloroso sherry casks.

Roe & Co is one of the newest distilleries on this list; it opened to the public in 2019, and premiered this whiskey in March of that year. It’s a blend comprised of whiskeys sourced from throughout Ireland and aged in ex-bourbon casks, and it scored 88 points in our Fall 2019 Buying Guide.

If you find yourself tiring out in the midst of your St. Paddy’s Day celebrations, Jameson’s newest product may provide the caffeine boost you need. This “whiskey” technically isn’t that at all, since it includes added cold-brew coffee flavor. But it’s a great cocktail ingredient and a no-brainer for making Irish Coffees in a snap.