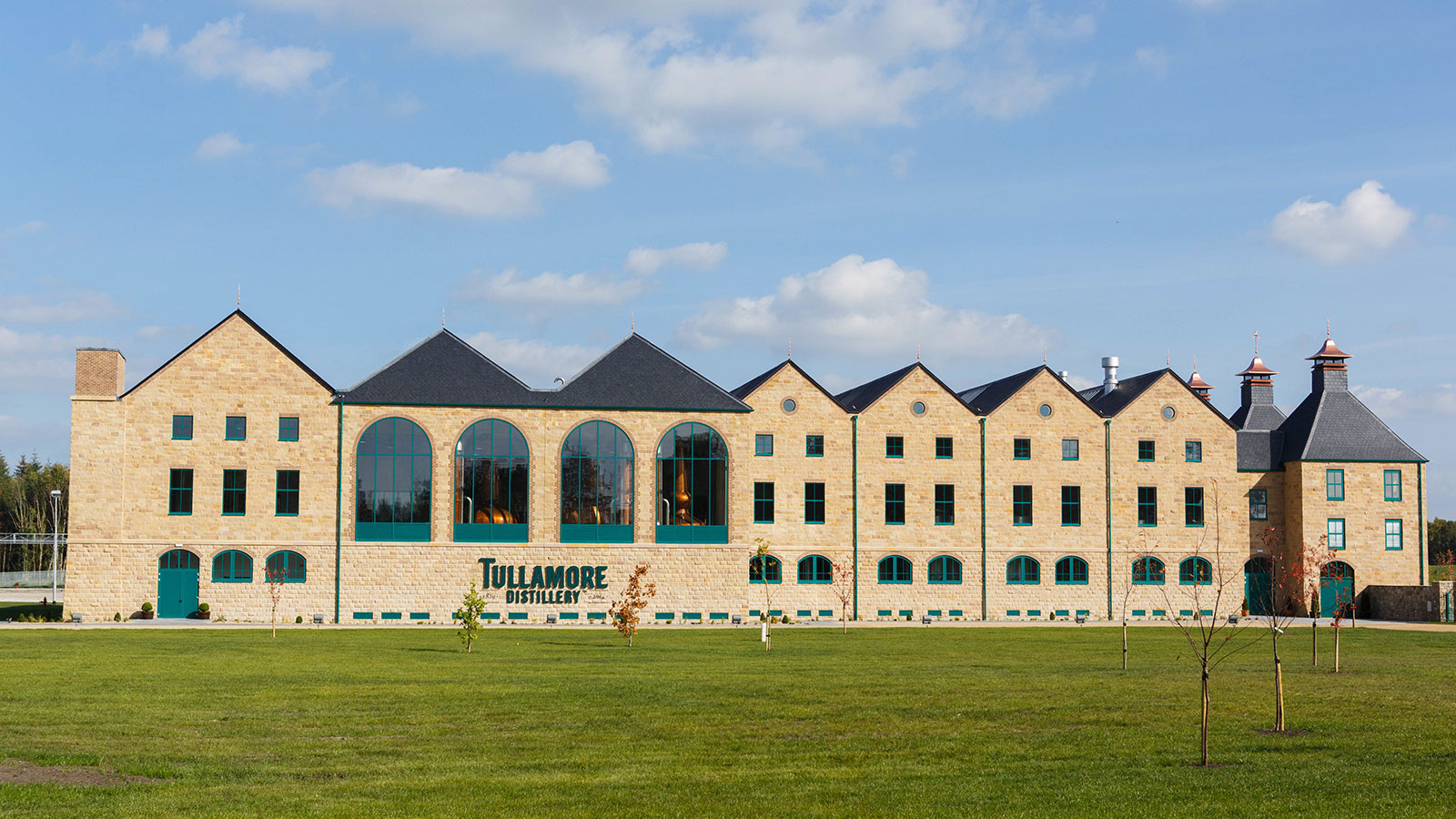 Tullamore D.E.W. has made ribbon cutting obsolete. For the opening of their new distillery on October 19th 2017, a bottle of Tullamore D.E.W. was smashed against a grain column like the launching of a ship, eliciting cheers from the assembled guests. The grain distillery’s opening comes three years after Tullamore began production at its malt and pot still whiskey distillery, located adjacent to the new facility. After a $70m investment, Tullamore D.E.W. has been transformed: long blended from sourced whiskey, the brand’s production is now going grain to glass.

The Rebirth of Tullamore D.E.W.

Tullamore, Co. Offaly is a busy little country town in the center of Ireland, an hour west of Dublin. It’s the original site of the Old Tullamore distillery (1829-1954) that was once owned by Daniel E. Williams (his initials put the D.E.W. in the whiskey). William Grant & Sons, best known as the family behind Glenfiddich and Balvenie in Scotland, purchased the Tullamore D.E.W. brand in 2010, and set about building their own distillery. In 2014, Tullamore’s malt and pot still distillery became operational. When work began on the new grain distillery in October 2016, 900 tons of rock were laid down to form a solid foundation. By February 2017, the main steel frame was erected, and more than five miles of stainless pipework had been installed by September. Now, with the establishment of triple-distilled grain production, maturation, and a new bottling hall at one site, Tullamore D.E.W. can aspire to a bright future as an Irish single blend, without reliance on other distilleries.

Tullamore is Ireland’s fourth grain whiskey distillery, joining Midleton, Cooley, and Great Northern Distillery. Just like at the company’s Girvan distillery in Scotland, the production of Tullamore D.E.W. grain whiskey represents a major commitment to blending by William Grant & Sons. “Whenever the scale is big enough and the long-term future looks good, the philosophy is to own everything,” Brian Kinsman, master blender at William Grant, explains at the grand opening. “The character of the blend is so inherently reliant upon the grain. Otherwise, your single biggest influence on flavor is not in your control.”

Few Irish whiskeys declare the provenance of their cereals, but Tullamore does: the grain distillery will use Irish wheat, not imported corn. “We are very clear on the flavor profile we desire,” says Kinsman, noting that Girvan has distilled with wheat for more than 30 years. “We want a light, green, crisp, relatively low congener profile, as we know that will mature into the whiskey that we want. It’s not that we couldn’t do it with corn. It’s just we know how to do it this way. Our knowledge is wheat.” 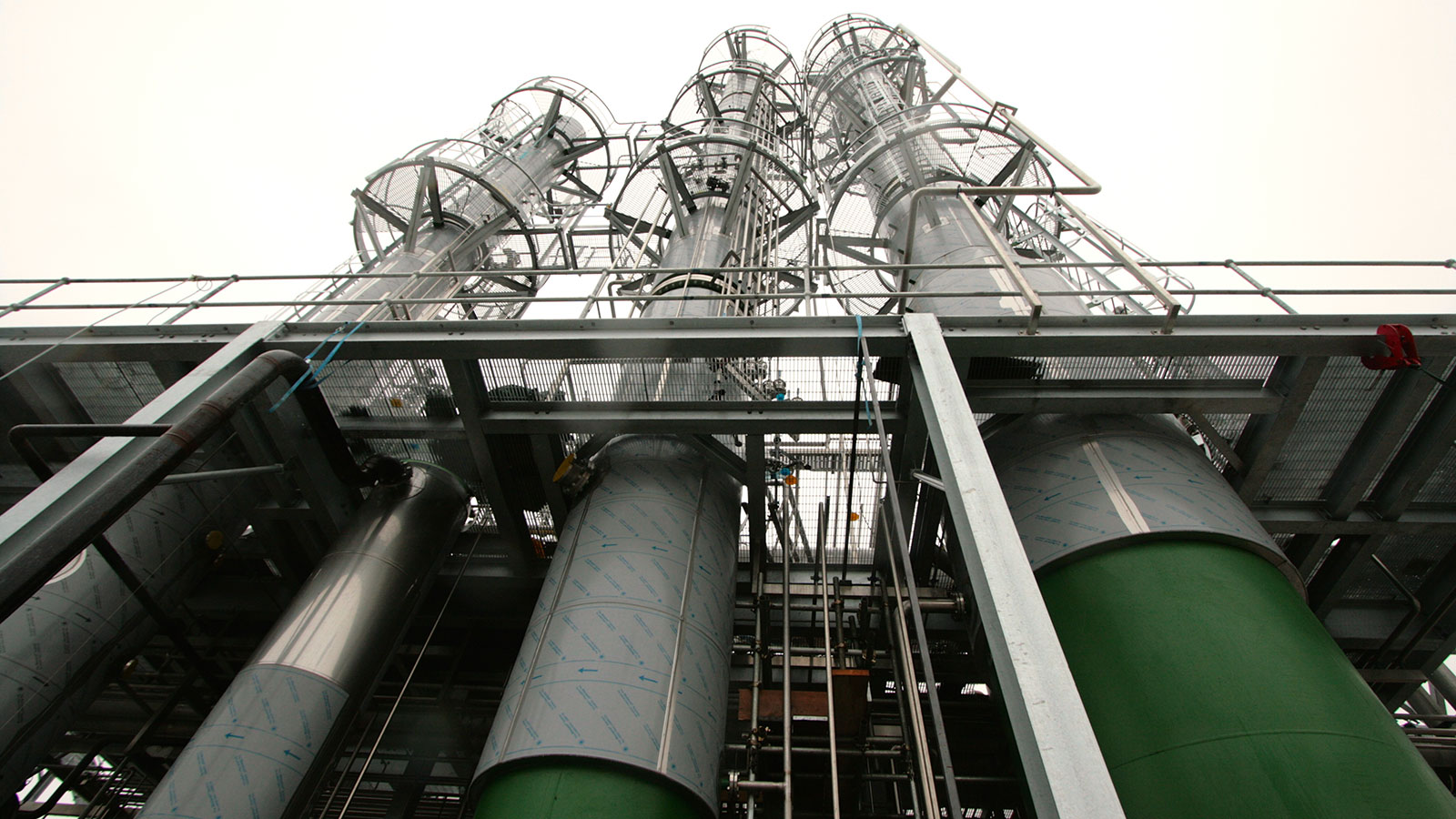 The grain columns tower over the rest of the new Tullamore facility.

The Taste of Tullamore

Kinsman describes the flavors of Tullamore D.E.W’s house style as grassy, quite crisp, with green apple, a little bit of fruitiness, and a subtle hint of spice. “Those flavors come from the three different fillings,” he says. “Grain [whiskey] brings all the green, crisp notes, the single malt brings fruity esters, and the pot still has the spice notes.” The liquid inside the current Tullamore D.E.W. whiskeys were sourced elsewhere but blended by Kinsman, and as Tullamore distillery’s own production reaches maturity, it, too, will contribute to these whiskeys.

Things are already off to a good start. The first cask from the malt and pot still distillery has reached three years and a day and can legally be called whiskey. Kinsman’s verdict on the single malt drawn from cask #1: “I’m pleasantly relieved,” he deadpans, before breaking into a chuckle. It’s no surprise really: the sensory panel has been studying the new-make spirit from day one, checking the malt for fruitiness and the pot still for spice. Kinsman’s confidence has been growing as the samples reached six months, twelve months, and then eighteen months old. “Three years old is a nice milestone. That’s good quality whiskey, with the fruity character we’re looking for,” he remarks, looking more than satisfied. “It will need a wee bit more maturation, but it’s still an exciting day.” 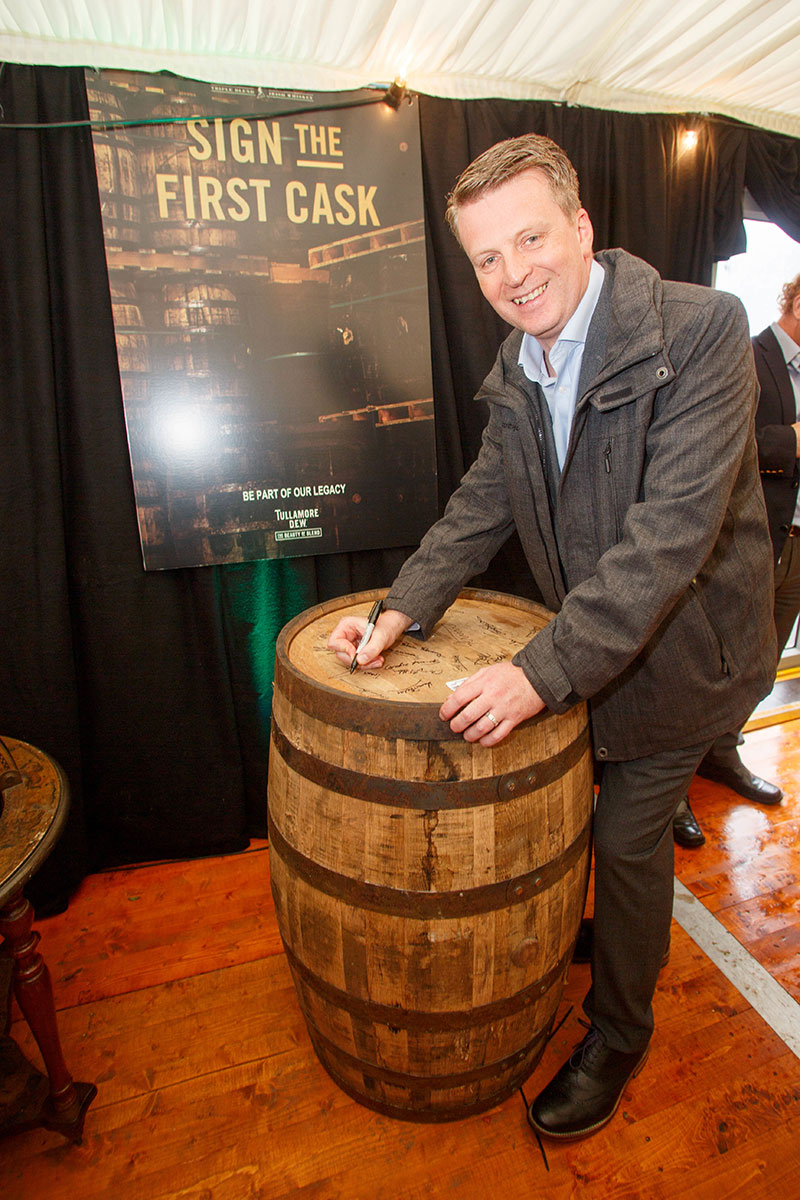 Kinsman has made a name for himself with his experimental whiskey finishes. He’s taken Tullamore D.E.W. for a whirl in a cider cask, and his latest creation layers on tropical fruits and golden sweetness with a secondary maturation in a first-fill Demerara rum cask, linking the role of 17th century Irish emigrants in the development of rum production in the Caribbean. Tullamore D.E.W. XO Caribbean Rum Cask Finish will make its U.S. debut in 2018, after initially being available in travel retail. Kinsman seems invigorated by the possibilities for innovation, but sees the greatest potential for new flavor creation within the distillery, not the warehouse. “We’ve built it deliberately with an eye on innovation,” he says. “There’s lots of added capacity; there are a lot of controls that we can mess about with. I’ve genuinely no idea what the results will taste like, but there’s a huge list of stuff we’d like to try.”

At Tullamore D.E.W., they triple distill the three distinct spirit styles of pot, malt, and grain, which are each filled into three different cask types: bourbon, sherry, and refill casks. Tullamore D.E.W. calls it the power of three. As master blender of Irish whiskey, Kinsman has the freedom to experiment in a way that is impossible with scotch. Whether dabbling in the proportions of malted to unmalted cereals, venturing beyond unmalted barley, or adjusting the cuts of the distillate as it emerges from the still, Kinsman sees unlimited possibilities, with exciting whiskeys in store for imbibers. “I don’t know of any other place with grain, malt, pot, blending, maturing, and bottling all on the same site,” he says. “This is a pretty unique place.”