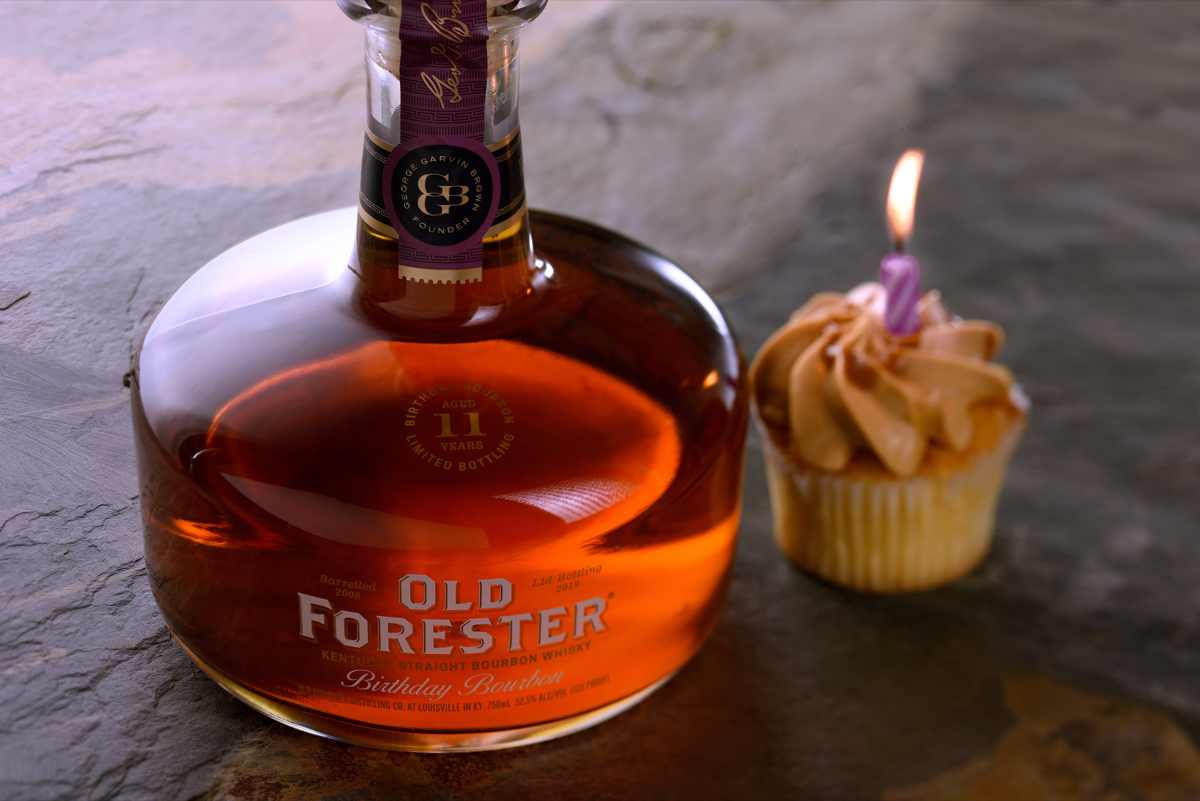 The 2019 release of Old Forester Birthday Bourbon drops on September 2. (Cupcake not included.) 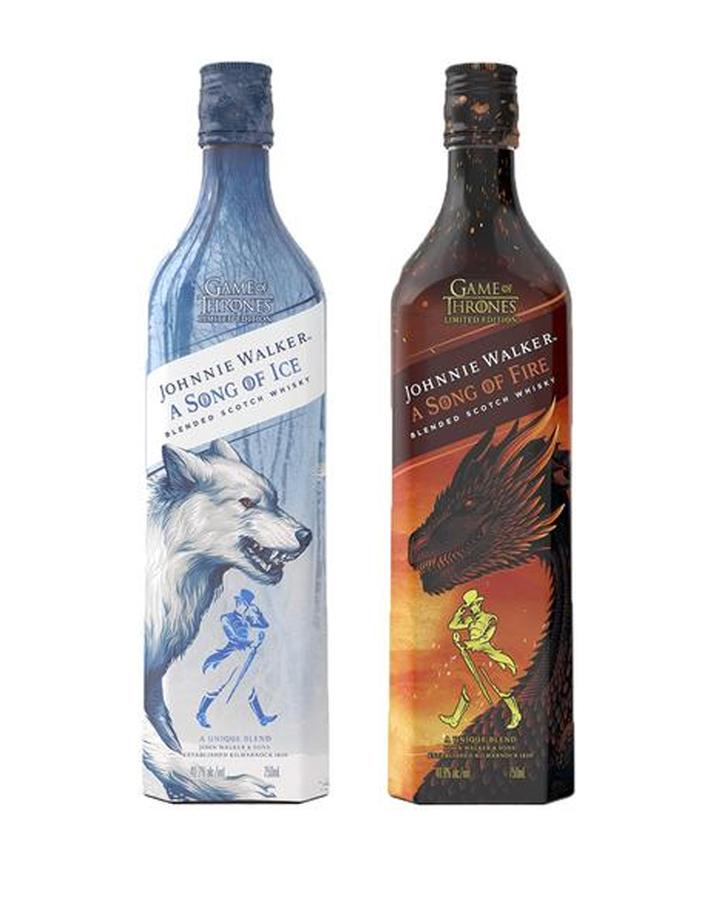 Do you miss Game of Thrones? Johnnie Walker—which previously released White Walker—is here to help assuage your woes with two new special-edition blends: Song of Ice and Song of Fire. Few details are available, but even a casual GoT fan will recognize that the Song of Ice packaging features direwolves, the sigil of House Stark, while the Song of Fire packaging shows House Targaryen’s dragons. Both whiskies are available for pre-order at Reservebar.com, priced at $43. A full U.S. rollout will happen in August.

Also coming out at the end of the summer, Old Forester’s 2019 Birthday Bourbon. The whiskey is bottled at its highest proof yet—52.5% ABV—and carries a suggested price of $100, with 13,200 bottles available.

India’s Amrut Distillery is rolling out a new iteration of Greedy Angels, its hyper-mature single malt. This release was distilled with peated malt and has been aged for 10 years. Priced at $1,100, there are 108 bottles available in the U.S.

Balcones is set to launch a single malt distilled from barley grown and malted in Texas—a first for the distillery and the state. Balcones High Plains Texas single malt will be available for $60 at the distillery starting June 22.

Virginia’s Catoctin Creek will launch the 2019 version of its Día de los Muertos whiskey distilled from locally made stout. The whiskey will go on sale at the distillery on July 6, priced at $160.

Oak & Eden is releasing two bourbons that have been “bottle-finished” with toasted oak staves soaked in beer from Fort Worth’s Rahr & Sons Brewery. Each release in the Oak & Eden Ale Series is priced at $54 and available in Texas and Oklahoma.

Finally, Distillery 291 in Colorado is releasing a 2 year old bourbon. Aged in 10-gallon barrels, the whiskey is extremely limited and available only at the distillery, priced at $200. 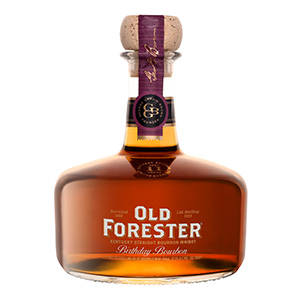 In its 19th release, Old Forester Birthday Bourbon was distilled on May 18, 2008 and matured on the second floor of Warehouse I. It comes from 120 barrels and is bottled at barrel proof, 52.5% ABV.

This is the highest-proof Birthday Bourbon ever bottled. As usual, it will officially debut on September 2, the birthday of Brown-Forman founder George Garvin Brown. But since the distillery can’t actually control when its product is put out on shelves, you may see it show up in stores sooner. (It’s a hot commodity, so be sure to talk to your retailer about whether they’re getting any bottles—and to ask if you can get your hands on one.) 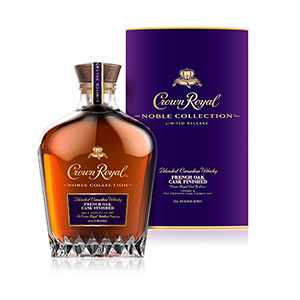 The fourth annual release in Crown Royal’s Noble Collection, this whisky starts off as Crown Royal Fine De Luxe and is then finished in new French oak casks. The oak is sourced from France’s Vosges region, air-seasoned for two years, and then double-toasted.

Crown Royal’s Noble Collection debuted in 2016 and has rolled out hit after hit. The first release, Cornerstone Blend, scored 91 points, while the next release, Wine Barrel Finished, scored 90 points and won the No.-18 spot in the 2017 Top 20. Finally, the 2018 release, Blenders’ Mash 13 year old, netted 92 points and the No.-5 spot in the 2018 Top 20. Needless to say, expectations for the 2019 release are high. Look for a review in the next issue of Whisky Advocate! 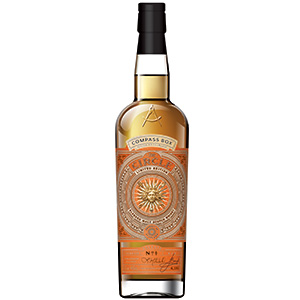 Created in collaboration with London bartender Rosey Mitchell of Three Sheets, this whisky combines a heart of Tamdhu single malt with single malts from Clynelish and an Orkney distillery, and a Highland blended malt. All the details about the whisky, including proportions and casks used in maturation, can be found on Compass Box’s website.

In 2018, Compass Box created a program for bartenders called The Circle which aims “to connect the creative process of the blending room with those of the bar trade.” The program sets challenges for a group of bartenders “to test their creativity.” The winner then gets the chance to create their own limited-edition Compass Box blend—and this is the first. 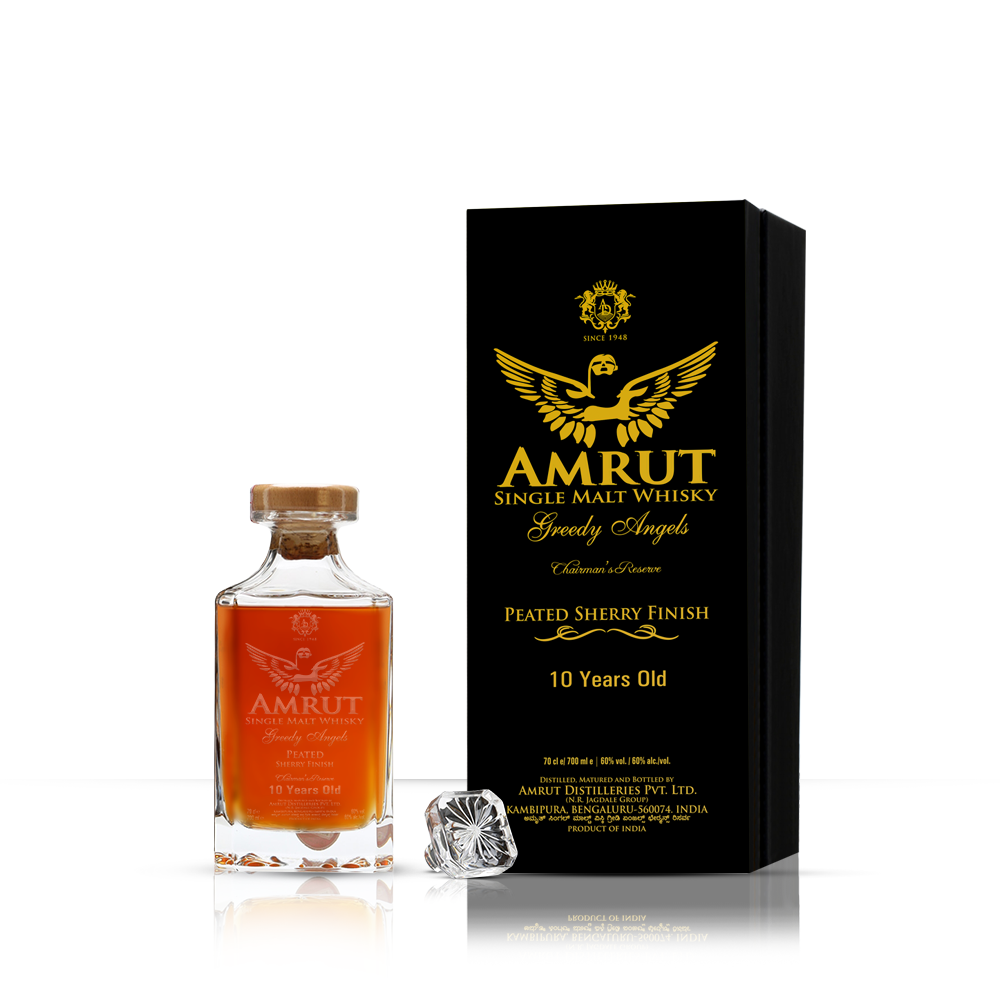 The newest release of Greedy Angels, Amrut’s super-aged single malt, this peated single malt spent seven years in a first-fill oloroso sherry butt before being split up for a dual, 3-year finish: 100 liters in new American oak and the remainder in ex-bourbon casks.

Amrut is located in Bangalore, India, where the tropical climate causes very rapid maturation—and also huge evaporative losses, known as the angels’ share. The name “Greedy Angels” is a sly reference to the fact that over this whisky’s 10-year aging period, the liquid’s volume shrank by a whopping 62%. (Compare that to Scotland, where the evaporative loss is about 2% annually.) Amrut has released Greedy Angels at various ages in the past, but it has always been in very limited amounts because of how little remains after aging. The oldest Greedy Angels release came in 2017, at 12 years old. 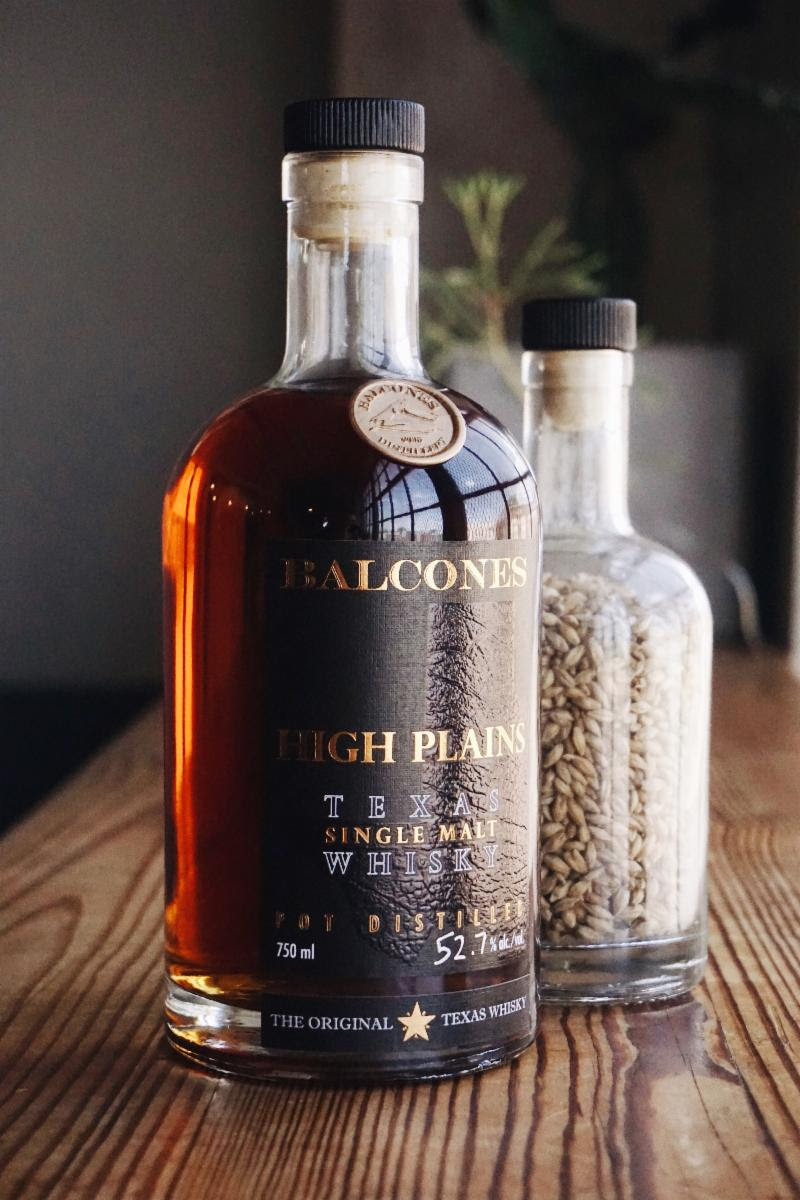 This is the first whiskey made entirely from barley grown and malted in Texas. Since barley doesn’t easily grow in the state’s climate, this is an understandably limited product.

Whether or not the provenance of a particular grain has an impact on whiskey flavor is a source of much debate, but it has been established that, at least in the case of barley, certain factors play a big role in the final product. The use of local, heritage, or heirloom varieties of grain is a hallmark of many craft distillers, including Balcones, which has been using Southwest-grown blue corn for years. 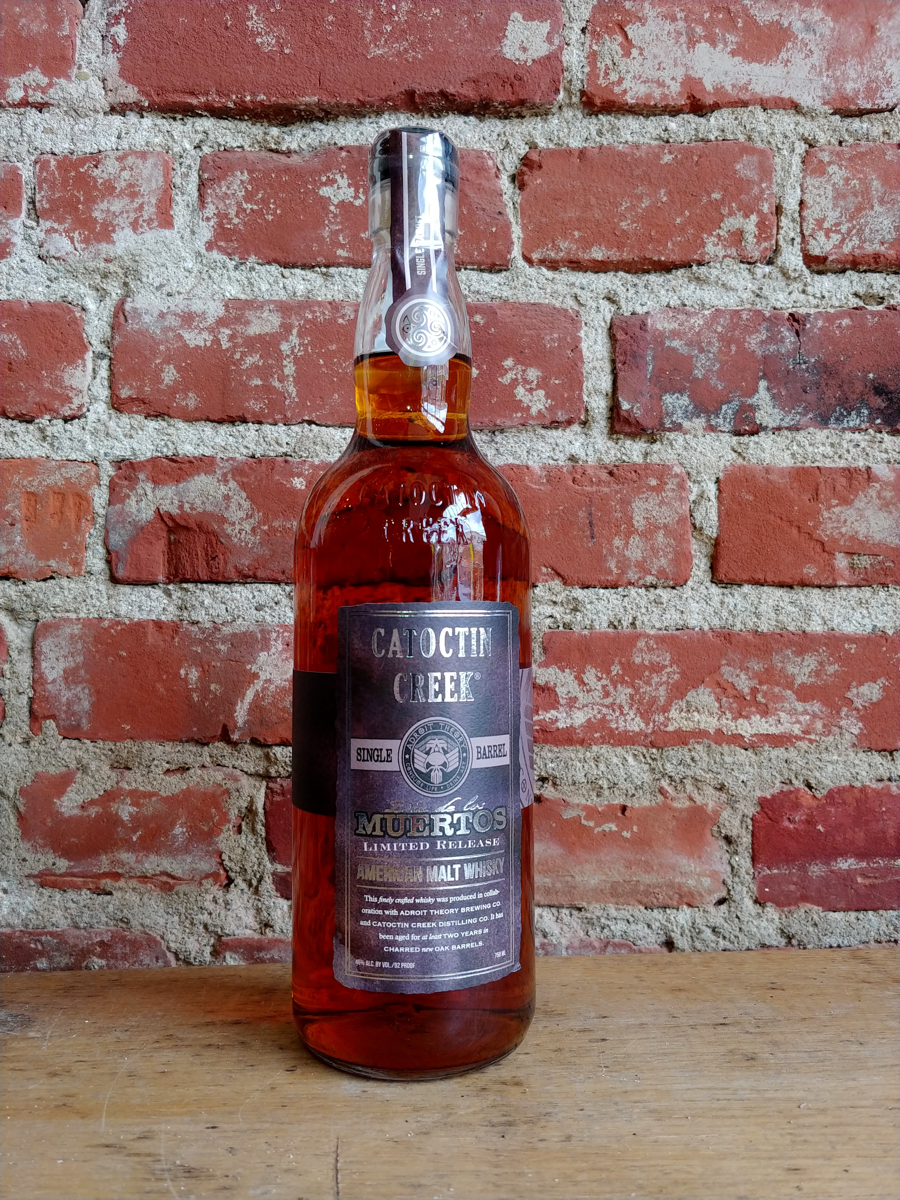 Following up on a batch previously released in November 2016, Purcellville, Virginia’s Catoctin Creek distilled this whiskey from Russian imperial stout made by nearby Adroit Theory Brewing Co., aging it for four years and change in new charred Minnesota oak barrels. Bottles go on sale in Catoctin Creek’s tasting room on July 6. On the same day, the brewery will release 190 bottles of its stout aged in Catoctin Creek maple whiskey barrels.

Whiskey distilled from craft beer has become more common in recent years, with distilleries across the country collaborating with local breweries to create truly unique products. At this point, there are so many variations that it would be challenging to list them all, but here are some suggestions if you’re interested in plunging further into the style. 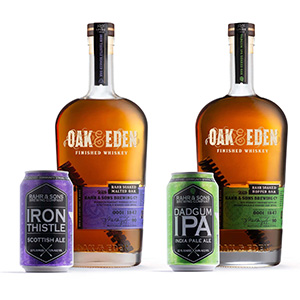 Whereas the Catoctin Creek above gets its beer influence from the wash that it’s distilled from, these bourbons have beer flavor added through Oak & Eden’s “bottle finishing”—oak staves (in this case, soaked in beer) that are put directly into the bottle of mature whiskey. It’s the same concept behind whiskeys like Jameson Caskmates that are fully matured in traditional barrels, then transferred to stout and other beer casks for a finishing period. 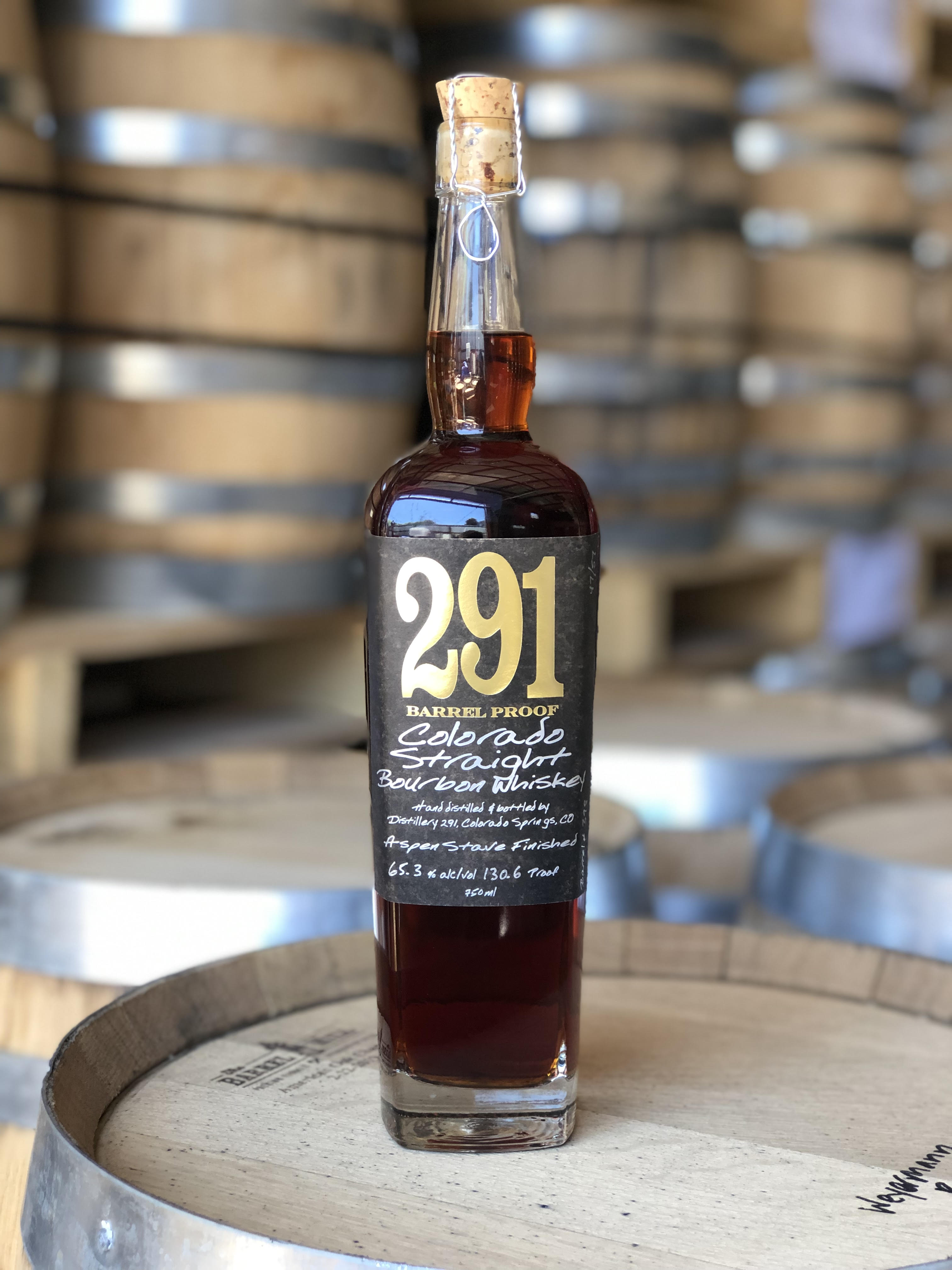 Made at Colorado Springs’ Distillery 291, this bourbon aged for 2 years in a 10-gallon barrel, and then was “finished” by adding toasted aspen staves to the barrel.

The distillery says it’s their first straight whiskey; however, using aspen staves as part of the maturation process means this isn’t technically a straight bourbon. Straight bourbon (and, indeed, all bourbon) can only be aged in new charred oak containers, with nothing added apart from water. Straight whiskey of any kind must be matured for at least two years, and Distillery 291 is committed to maturing more of its whiskey for longer periods of time. Whisky Advocate reviewed the distillery’s single barrel rye last fall, scoring it 89 points.