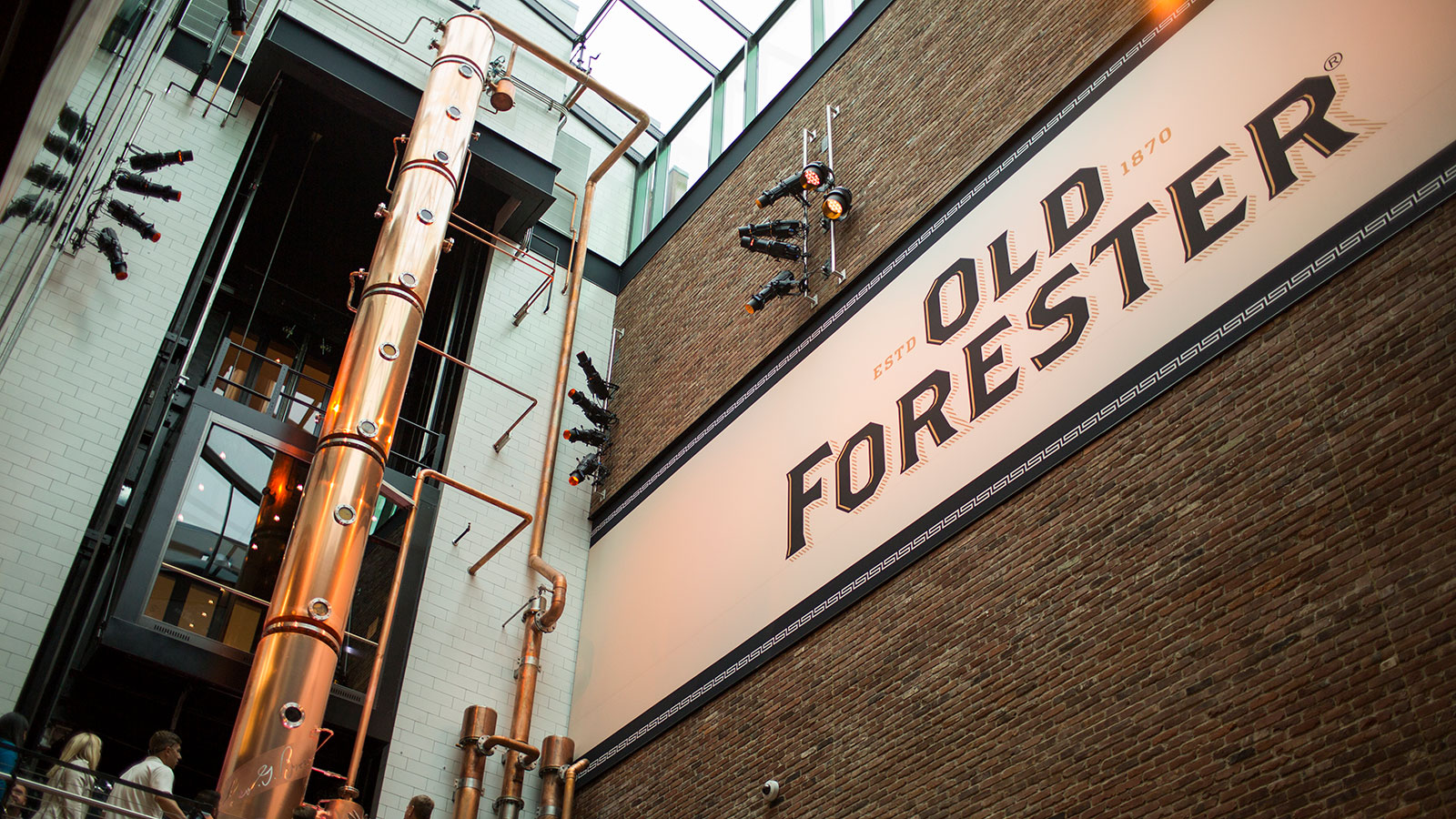 Old Forester can add a new date to its multi-century history: on June 14, 2018—which is also National Bourbon Day—the brand made its return to downtown Louisville with a new 70,000-square-foot, $45 million distillery. The new premises includes a full production facility, including a 24-inch column still, an active cooperage, and an immersive visitor experience. While the distillery started production in May, June 14 marked its official opening to the public, with tours offered starting June 15.

Easily accessible in the heart of Louisville’s Whiskey Row, Old Forester’s new site takes bourbon tourism beyond a simple tour and tasting. Visitors will get to see the barrel elevator, fermentation room, yeast propagation lab, cooperage and accompanying char room—where one lucky tour guest will get to participate in the barrel-charring process—a 3- story barrelhouse, bottling line, and more. “It’s a very holistic, one-stop shop, seeing the entire process,” says Old Forester master taster Jackie Zykan. “Fermentation, distillation, warehousing—we have a warehouse in the back; we’ll bottle here. It’s everything; it’s every single part of the process. And it’s in downtown, which is amazing.”

The Old Forester Distillery is located at 117/119 West Main Street, the same address where the whiskey was made from 1881 to 1919. Prohibition went into effect the following year, and while Old Forester’s parent company, Brown-Forman, received a federal license to distill for medicinal purposes, it had to move production of the whiskey to nearby Shively, Kentucky. Old Forester has been made there ever since.

Geared toward welcoming visitors, the distillery will officially join the Kentucky Bourbon Trail. Although Old Forester is the longest running bourbon on the market today—consistently available since 1870—a return to Main Street, Zykan says, is a huge step toward the brand regaining its place as a bourbon leader. “[With] the resurgence of bourbon, everybody’s growing, and we’ve grown enough to get back on everyone’s radar,” she says. “But awareness has always been our biggest struggle because with that bourbon boom also came an influx of thousands of different brands. You’ve been able to buy a bottle of Old Forester since the start in 1870, no exception. It’s [now about] getting back on the level of awareness that we were at. And I think that this distillery is going to accomplish that goal.” 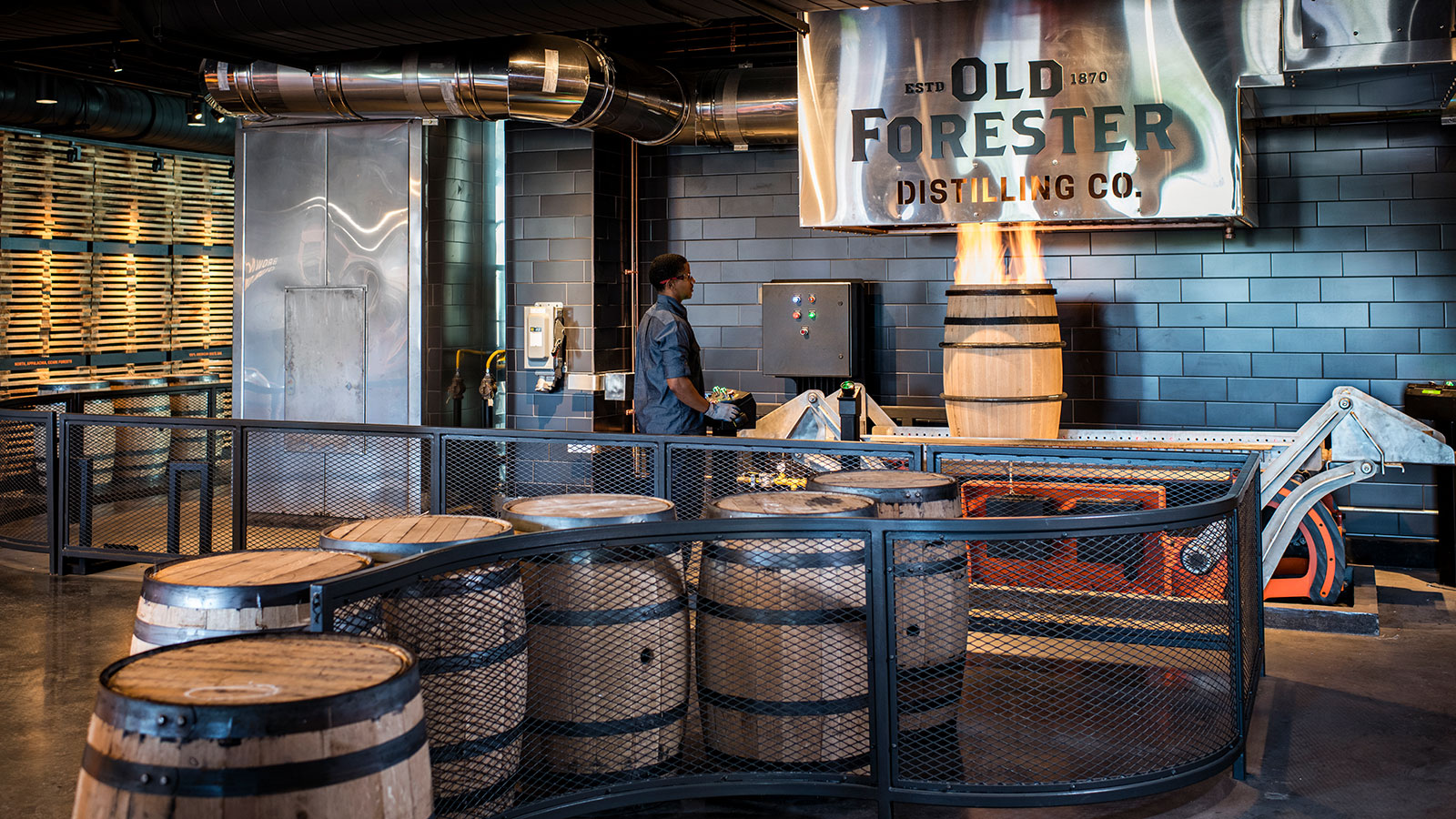 At the new distillery, one lucky tour guest will get to participate in the barrel-charring process. (Photo by Andrew Hyslop)

Getting to the opening day alone has been an accomplishment in and of itself, as the distillery project has been in the works for several years. The official groundbreaking was held on July 22, 2015, just a few weeks after a fire damaged neighboring buildings, complicating construction timetables and cost. The new distillery will produce whiskey for Old Forester in tandem with the Shively campus, with the Louisville facility producing over a million bottles of whiskey a year.

For opening weekend, Old Forester Distillery is extending its hours to ensure as many people as possible can get a first look. The distillery will otherwise be open weekly Tuesday through Saturday, 10 a.m. to 6 p.m., with multiple tours a day offered for $16. Each tour includes a tasting of the bourbon. Reservations are encouraged at OldForester.com.

As part of its return to Louisville, Old Forester reintroduced a historic brand, The President’s Choice. This single-barrel bourbon, selected by Brown-Forman president Campbell Brown, is available exclusively at the Old Forester Distilling Co. and a few Kentucky retailers.

Zykan says that every person at Brown-Forman has been eagerly awaiting the opening of the new Old Forester distillery. “There’s something really important with this brand—it’s so near and dear to this company’s heart,” she says. “Everyone is so blown away because the renderings have been out there for a while, but it’s not the same when you walk in and the light of the space is there and you get to feel the whole process and smell it, touch it. Everybody has just been floored.”