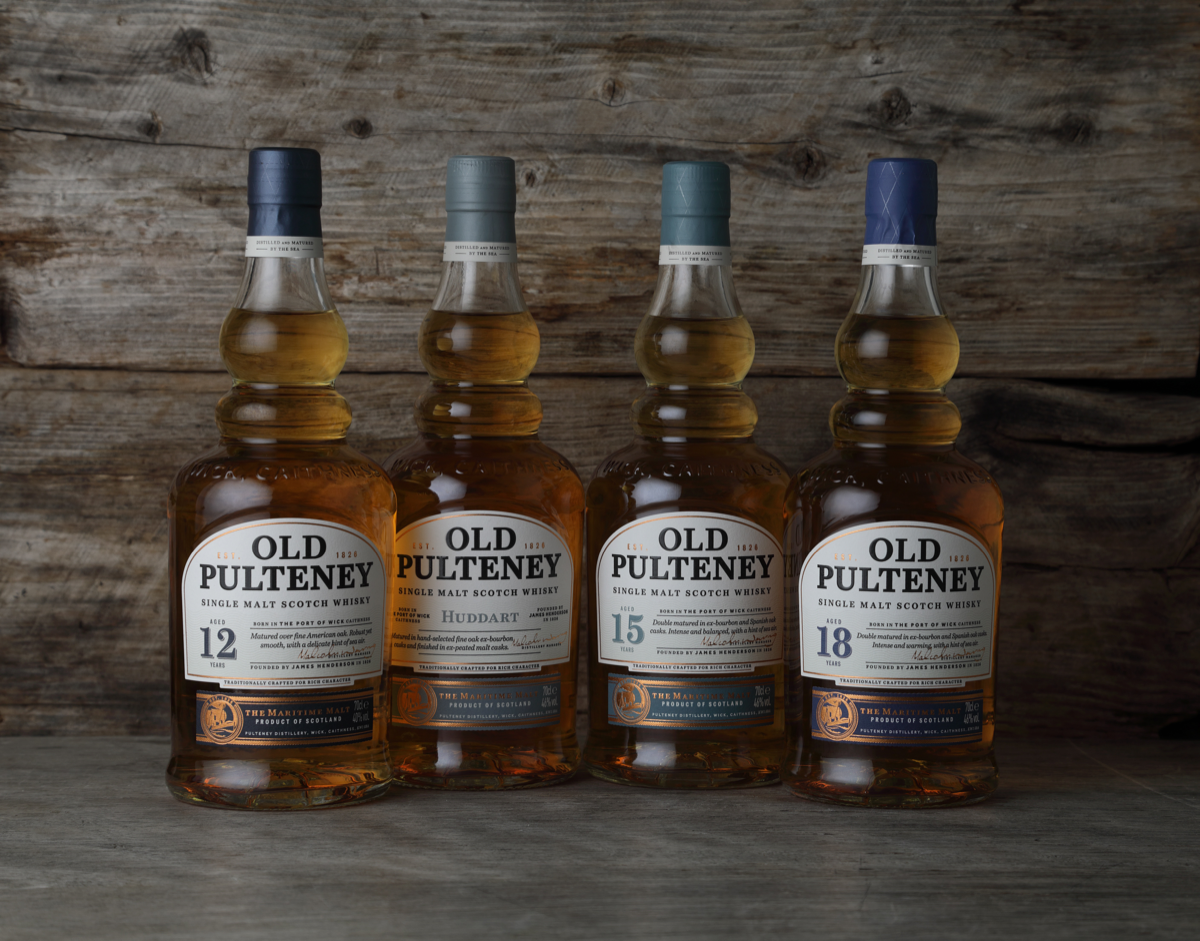 It’s a great week for single malt scotch lovers. After teasing four new whiskies just a few weeks ago, Old Pulteney has revealed a brand-new lineup for its core range, including the non-age statement (and slightly peated) Huddart, a 15 year old, and an 18 year old. The flagship Old Pulteney 12 year old will continue to be available as well, but with revamped packaging to match its new brethren. Old Pulteney discontinued its 17 year old and 21 year old expressions in 2017 (although eagle-eyed hunters may still spot them on store shelves as back stock gets sold through), and now with the rollout of these three new single malts, the distillery is discontinuing Old Pulteney Navigator. Huddart, 15 year old, and 18 year old are currently available in the UK, and will hit the U.S. in early 2019.

Meanwhile, two new craft whiskeys are being released. Pennington Distilling Co. in Nashville, Tennessee has unveiled the second batch of its Four Grain whiskey. Each batch is unique in barrel makeup and flavor profile; this batch contains seven Tennessee whiskey barrels and three bourbon barrels and qualifies as a straight bourbon. It’s bottled at 50% ABV and will sell for $45.

Spirits of French Lick in Indiana is debuting its second bourbon in as many weeks. Following up on last week’s release of Lee W. Sinclair straight bourbon, the distillery is rolling out The Wheater, a blend of its own 2 year old straight wheated bourbon with 7 year old wheated bourbon made in Wyoming. The whiskey is available in Indiana for $45.

Two new world whiskies are becoming available, although not in the U.S. Kamiki blended malt whisky is produced in Japan from Japanese and imported single malts. Uniquely, it is finished in Japanese cedar casks. It’s available online for around $130.

Meanwhile, Sullivans Cove in Tasmania, Australia has introduced American Oak Tawny Cask. The single malt whisky is being bottled as a single cask, with additional casks becoming available in the coming years. It will sell for A$400, but will not be available in the U.S. 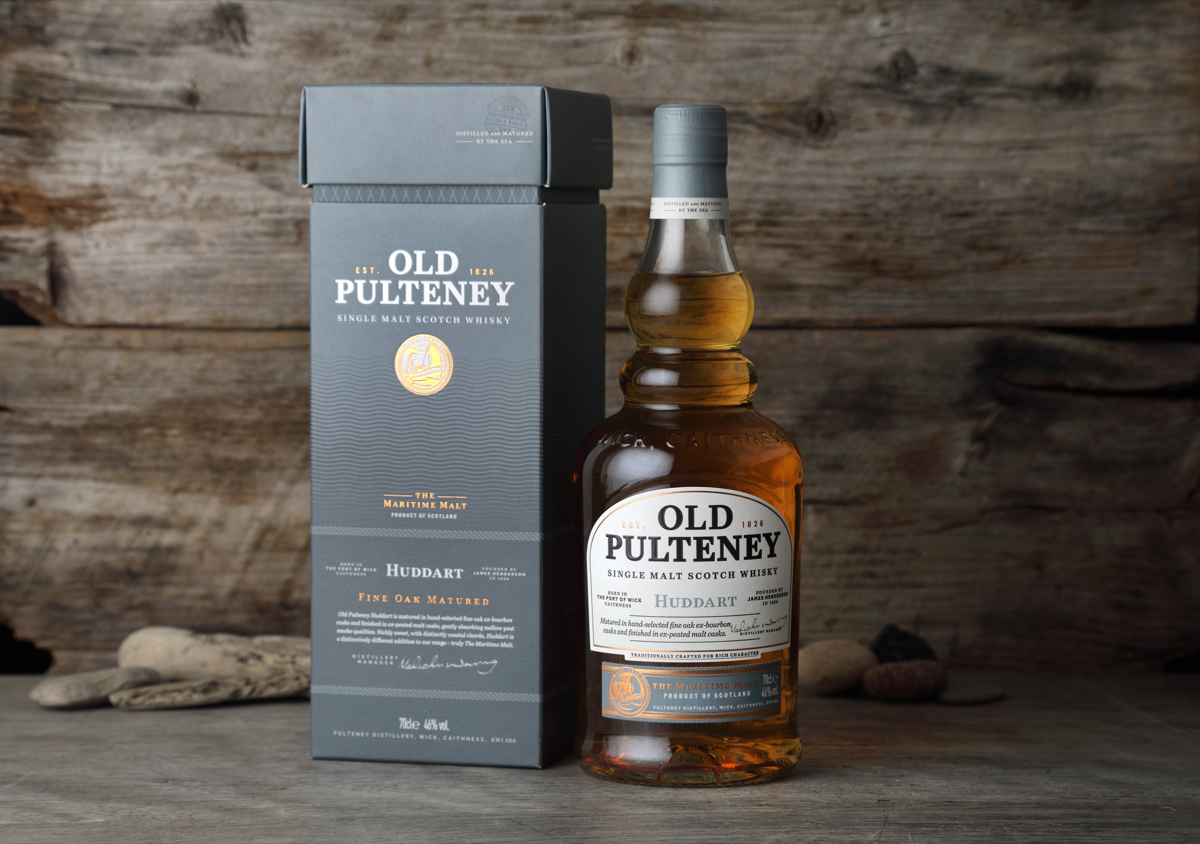 A new non-age statement single malt from Pulteney Distillery, Old Pulteney Huddart is matured first in second-fill ex-bourbon casks, and then finished in ex-bourbon casks that previously held heavily peated whisky. It is named for the street in Wick where the distillery is located, which in turn was named after Captain Joseph Huddart, a hydrographer who provided maps and charts for the British Fisheries Society, which built Pulteneytown (part of the town of Wick) and its harbor in the 19th century. 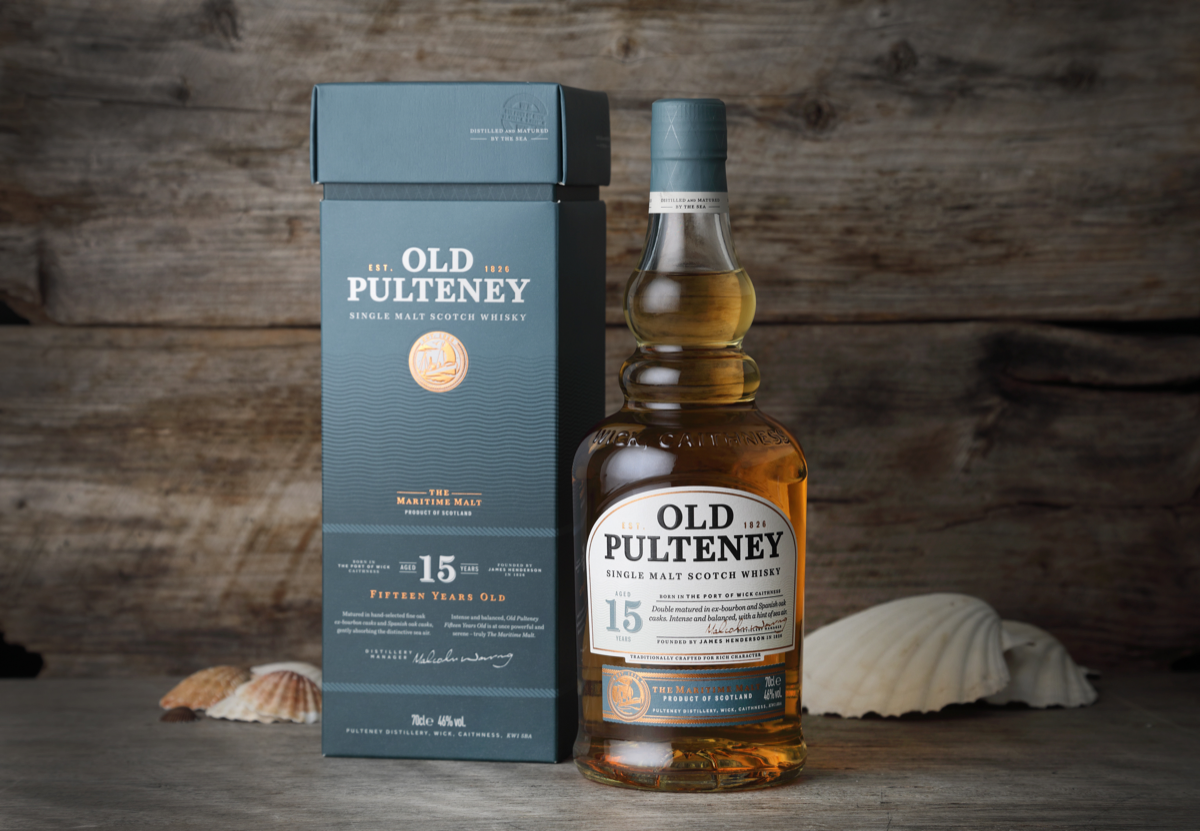 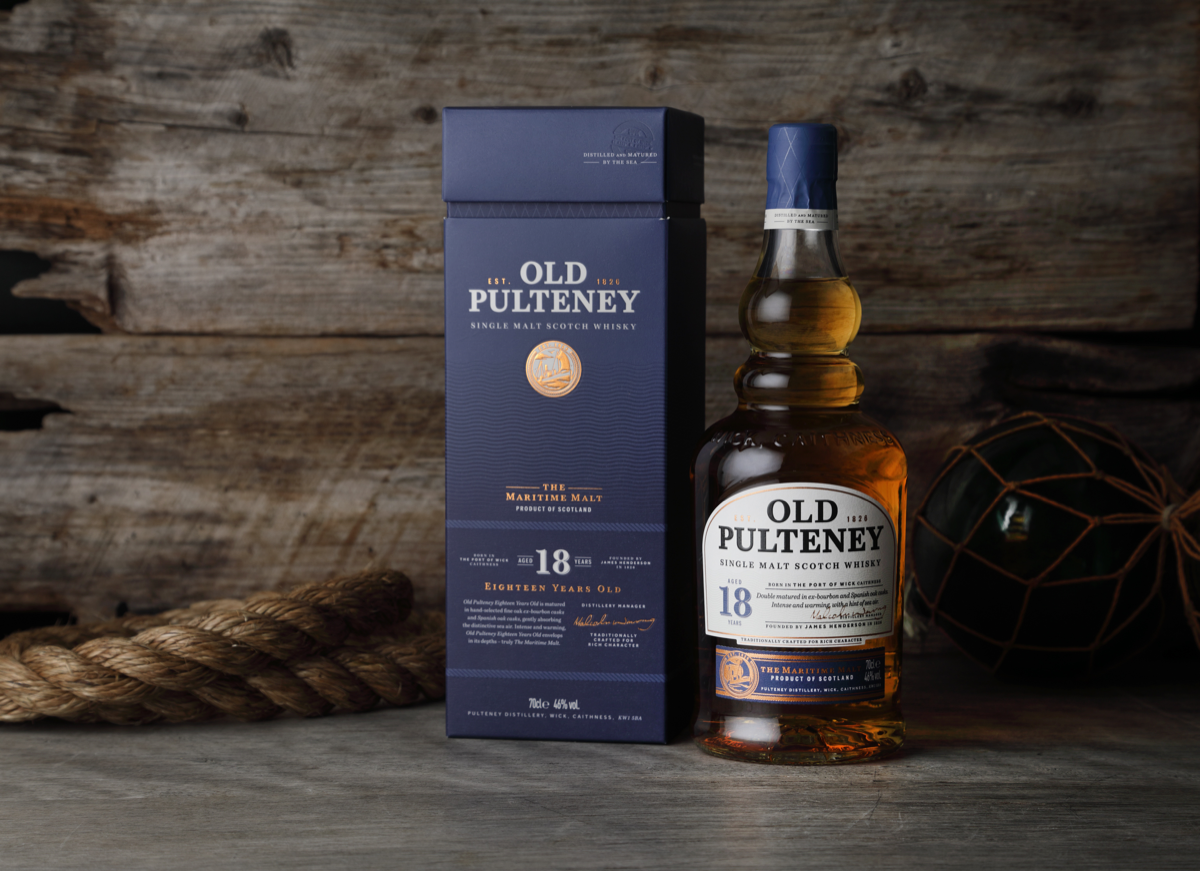 It’s been about a year since Old Pulteney announced it would be discontinuing its popular 17 year old and 21 year old single malts. While the distillery unveiled a 25 year old and a 1983 vintage earlier this year, many fans were left wondering if and when more accessibly priced and widely available whiskies would be released. Now we know: Old Pulteney has been preparing a brand-new lineup with single malts at different ages and prices, similar to its previous range of Navigator, 12 year old, 17 year old, and 21 year old. (Navigator is now being phased out.)

To provide some continuity, and because it’s a well-loved whisky at a good price, Old Pulteney 12 year old will continue to be widely available, but its packaging has gotten a refreshed look to match these three new expressions.

All three new expressions are currently rolling out overseas, but they will be hitting the U.S. in early 2019. The U.S. pricing has not yet been confirmed. 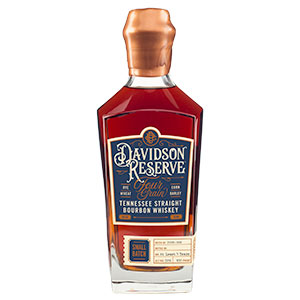 How can a mixture of Tennessee whiskey and bourbon be a straight bourbon? It’s one of the most hotly debated questions on the internet, but I’m here to tell you: Tennessee whiskey qualifies as bourbon. Everything about its production mirrors that of bourbon, with the addition of the Lincoln County Process—and there’s nothing about the Lincoln County Process that renders the whiskey not a bourbon. There you have it.

By the way, Pennington blends a different makeup of barrels for each batch of Davidson Reserve Four Grain. That means that Batch 2 will have a unique flavor profile compared to Batch 1, which consisted of four barrels of Tennessee whiskey, four barrels of bourbon, and two barrels of rye, and scored 85 points in the Whisky Advocate Buying Guide. 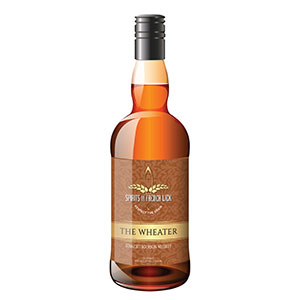 Spirits of French Lick The Wheater

This whiskey blends two straight bourbons: one was made in Indiana by Spirits of French Lick from a mashbill of 70% corn, 20% wheat, and 10% caramel malt, double-distilled on a pot still, and aged for two years. The other was made in Wyoming by an undisclosed distillery from a mashbill of 68% corn, 20% wheat, and 12% malted barley, distilled on both pot and column stills, and aged for five years in Wyoming, then two additional years at Spirits of French Lick.

While many new distilleries source and sell whiskey from more established producers while their own product ages, some are also turning to blending as a way to offer bottles for sale sooner. A younger-aged whiskey blended with older stock can end up tasting far greater than the sum of the two parts; producers like High West and Smooth Ambler have found success with this strategy. Spirits of French Lick also recently released a bourbon fully made in-house, Lee W. Sinclair Four Grain. It will be interesting to compare both spirits side by side. 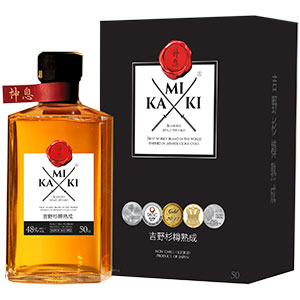 Combining Japanese malt whisky with malt whiskies sourced from elsewhere, this blend is uniquely finished in Japanese cedar casks. It is currently for sale online through vendors like dekanta.com and masterofmalt.com. A version that spent more time in cedar casks, called Kamiki Intense Wood, will be available later this year.

The vast majority of whisky casks are made of oak thanks to its tight grain, which prevents leaks, and the pleasant flavors it imparts. Woods like cedar are not often used, but can add new and unique flavors to the whisky.

Regarding Kamiki’s use of global malt whiskies as well as some made in Japan, this is a common practice among Japanese whisky producers. Learn more about Japanese whisky in our Instant Expert guide. 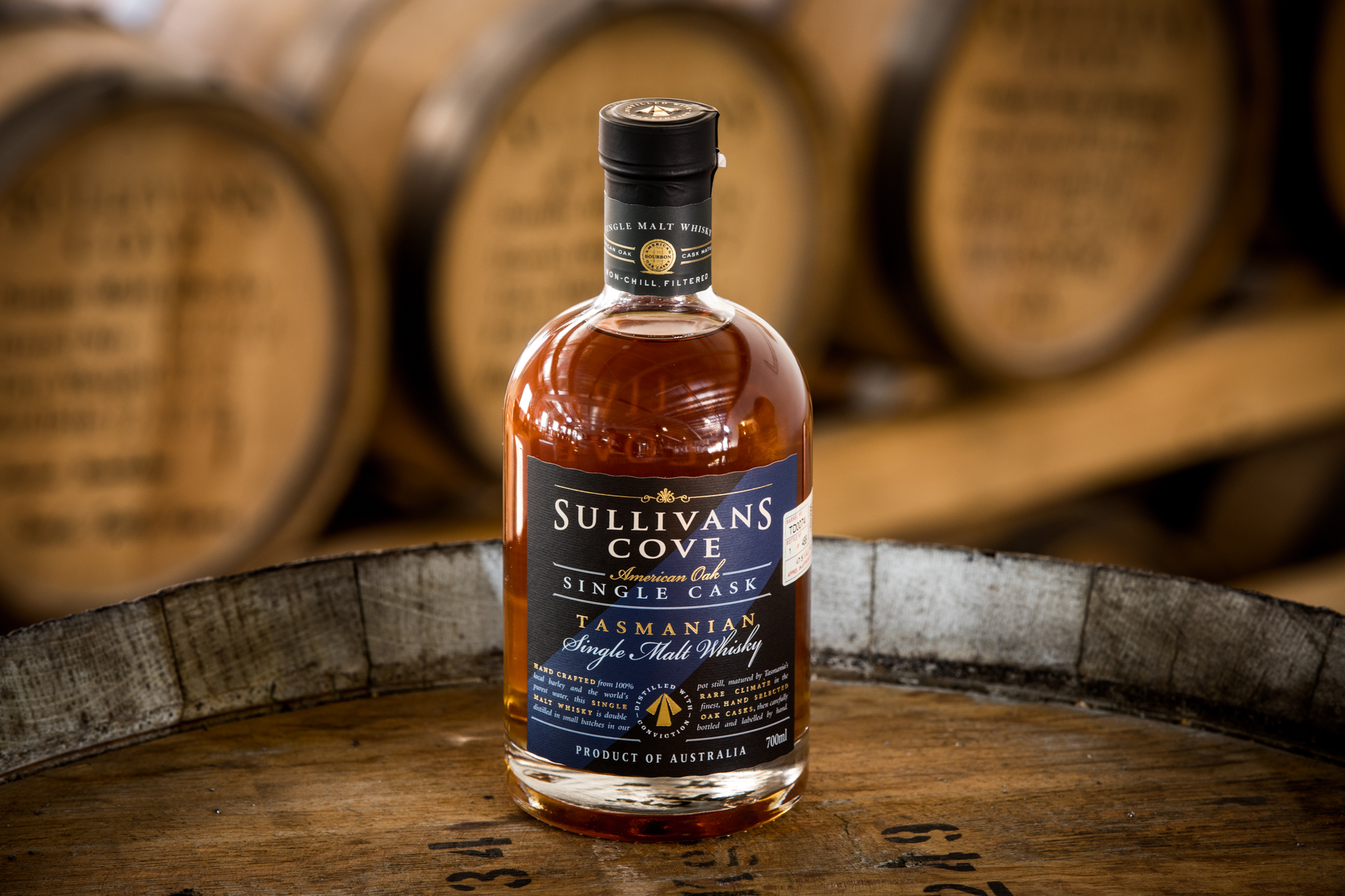 Sullivans Cove Distillery in Tasmania, Australia, is adding a new whisky to its core range. American Oak Tawny Cask was made from 100% Tasmanian malted barley and aged for 11 years in a single cask previously used for Australian tawny port-style wine. The whisky will initially be offered to the distillery’s mailing list members before going on sale to the public.

Sullivans Cove has a reputation for making excellent whisky, but it has suffered from a lack of availability. The distillery bottles its whiskies as single casks, and they’re in high demand. Even for this release, there are a few additional casks that it will be bottled in the coming years, but most of the whisky is still aging and will not be ready for another ten years or more.