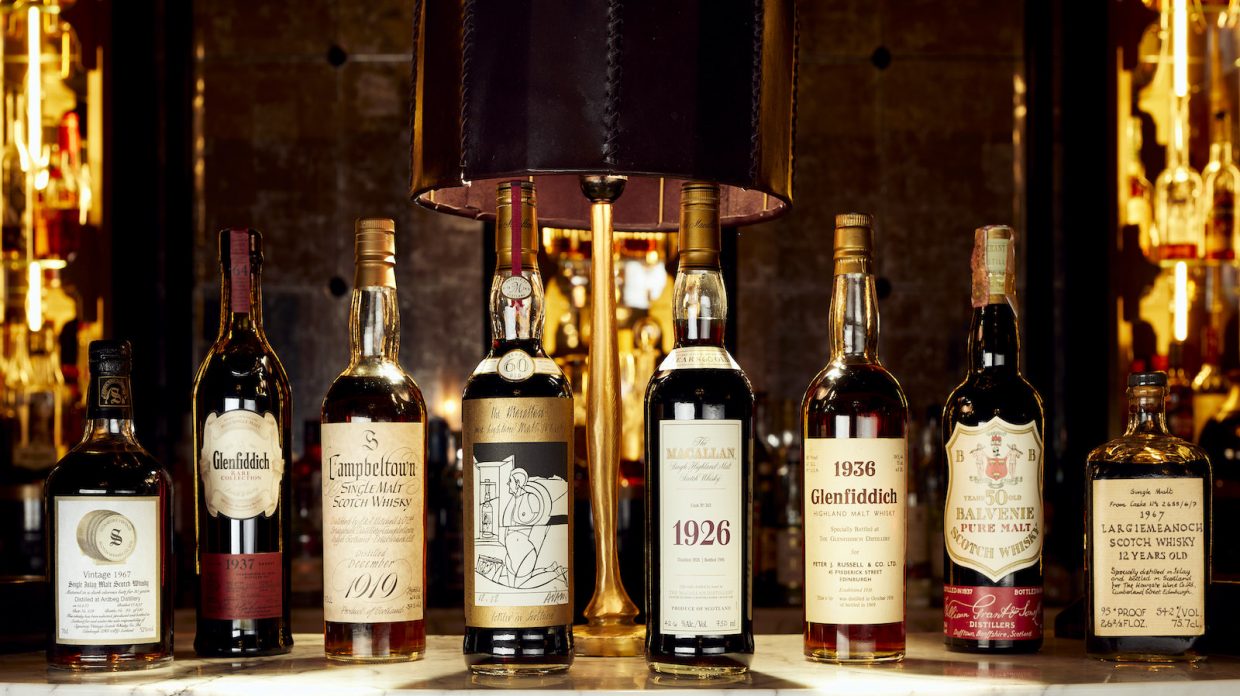 The Perfect Collection, offered in two sales by online house Whisky Auctioneer, includes two 1926 Macallan 60 year olds that could each go for $1 million.

Online whisky specialist Whisky Auctioneer will sell the largest single-owner collection of whisky ever to come to auction at two sales in 2020. “The Perfect Collection” comprises 3,900 lots with an estimated value of $9 million–$11 million. To give you some idea of its enormity, The Perfect Collection is 16% larger than the Diageo Claive Vidiz Collection, which is currently on display at the Scotch Whisky Experience in Edinburgh. And it is ten times larger than “The Ultimate Whisky Collection” sold by Sotheby’s in October 2019. As an online auction house, Whisky Auctioneer doesn’t typically release a catalogue of lots before the sale goes live, but Whisky Advocate has been able to get an exclusive first look at the list. To put things into context, we’ve scrutinized its contents, comparing this landmark auction with the Sotheby’s sale to determine which collection truly is most valuable.

What’s In The Perfect Collection

The bottles have been consigned from the estate of Richard Gooding, a Coloradan whisky collector who set the goal of assembling a perfect whisky collection with examples from every distillery. The sale includes 17 bottles from Gooding’s birth year of 1946 and more than 90 bottles from 1969, the year he married his wife Nancy. In a statement released by Whisky Auctioneer, Nancy Gooding said, “It was clear to us as a family that collecting Scotch was one of Richard’s greatest passions—an endeavor that spanned over two decades. He loved every aspect of it, from researching the many single malt distilleries to visiting them and tasting their whiskies.” As Gooding’s career progressed as the principal at a venture capital firm, he would fly to Scotland and Ireland to acquire whiskies for his collection from distilleries and auctions.

Whisky Auctioneer in Perth, Scotland will split the collection of just over 3,900 bottles into two online auctions scheduled to run Feb. 7-17, 2020 and April 10-20, 2020. The sales consists of 96% Scotch whisky (most of which is single malt, which makes up 93% of the entire auction), 2% Irish, and 1% American whiskey. The single malts (which are mainly bottled in 750-ml., a format collectors outside the U.S. may be especially interested in) originate from 120 different Scotch whisky distilleries; other than the absence of bottles of Kilchoman, Hazelburn from Springbank, and Hazelwood/Kininvie, this is a remarkably complete record of the Scotch whisky industry during this period. The list includes 26 Scotch whisky distilleries that are closed, mothballed, or demolished, including well-known names such as Port Ellen, Brora, Convalmore, Dallas Dhu, and St. Magdalene, but also lesser-known names such as Kinclaith, Glen Flagler, and Stromness, whose Old Orkney label has appeared at auction only three or four times.

Despite the hyperbole, The Perfect Collection is an accessible sale for all whisky drinkers and collectors; although some bottles could go for seven figures, there are plenty of lots—like supermarket brands, miniatures, and common finds from the 1980s and ‘90s—that could sell for a few hundred dollars or less, and even well under $100.

Despite the hyperbole, The Perfect Collection is an accessible sale for all whisky drinkers and collectors; although some bottles could go for seven figures, there are plenty of lots—like supermarket brands, miniatures, and common finds from the 1980s and ‘90s—that could sell for a few hundred dollars or less, and even well under $100. The list is rich with desirable independent bottlings from Gordon & MacPhail, Cadenhead’s, Samaroli, Moon Imports, Signatory, Douglas Laing, Blackadder, Sestante, Berry Bros. & Rudd, and more. The Irish whiskeys include releases from closed distilleries such as Coleraine, Bow Street, Daly’s Tullamore, and Old Midleton and are well worth a look.

The two bottles of 1926 Macallan 60 year old are the stars of the sale. The Fine & Rare and the Valerio Adami bottles have both previously exceeded $1 million and are currently the 1st and 3rd most expensive bottles of whisky ever sold at auction. If successful, Whisky Auctioneer would make history as the first online auction house to sell a million-dollar bottle, and this would be a major coup for online whisky auctions: Every million-dollar whisky to date has been sold at live auction by a traditional auction house such as Sotheby’s, Christie’s, or Bonhams. At live auctions, each lot concludes in a flurry of bidding over 30–60 seconds, while the dynamics are different online where bidding runs over ten days. Whisky Auctioneer will not only be hoping to take its first million-dollar bid but also to secure the world record price for a single bottle of whisky. Sotheby’s set the current world record on Oct. 24, 2019 with a hammer price of £1.2 million ($1,537,443) for the 1926 Macallan Fine & Rare 60 year old (£1,452,000/$1,873,951 with the 21% buyer’s premium). Although online auction houses have disrupted the influence of traditional live auction houses, offering lower fees and overheads and selling tens of thousands of bottles every month, the format has yet to yield anything as record-breaking as a million-dollar bottle. But this Whisky Auctioneer sale presents the best opportunity so far.

Let’s compare it to the most recent banner sale, The Ultimate Whisky Collection at Sotheby’s. That auction included whiskies housed in bespoke furniture and a number of whisky casks, and sold for just under $10 million with buyer’s premiums (an average of $25,203 per lot). The Perfect Collection contains a diverse range of independent and official bottlings that cross a wide range of price points. Whisky Auctioneer would need to exceed an average hammer price of $2,290 per lot to surpass Sotheby’s total.

Head to Head: Which Is the Greatest Whisky Auction of All Time?

Dedicated American collectors with a deep love for Scotch whisky assembled both of these amazing collections, but we will need to wait until April to discover which one becomes the greatest single-owner collection ever auctioned. Whisky Auctioneer can ship winnings to many parts of the U.S.; an up-to-date list of delivery locations and the latest information on the impact of U.S. tariffs for their buyers can be found on the website.