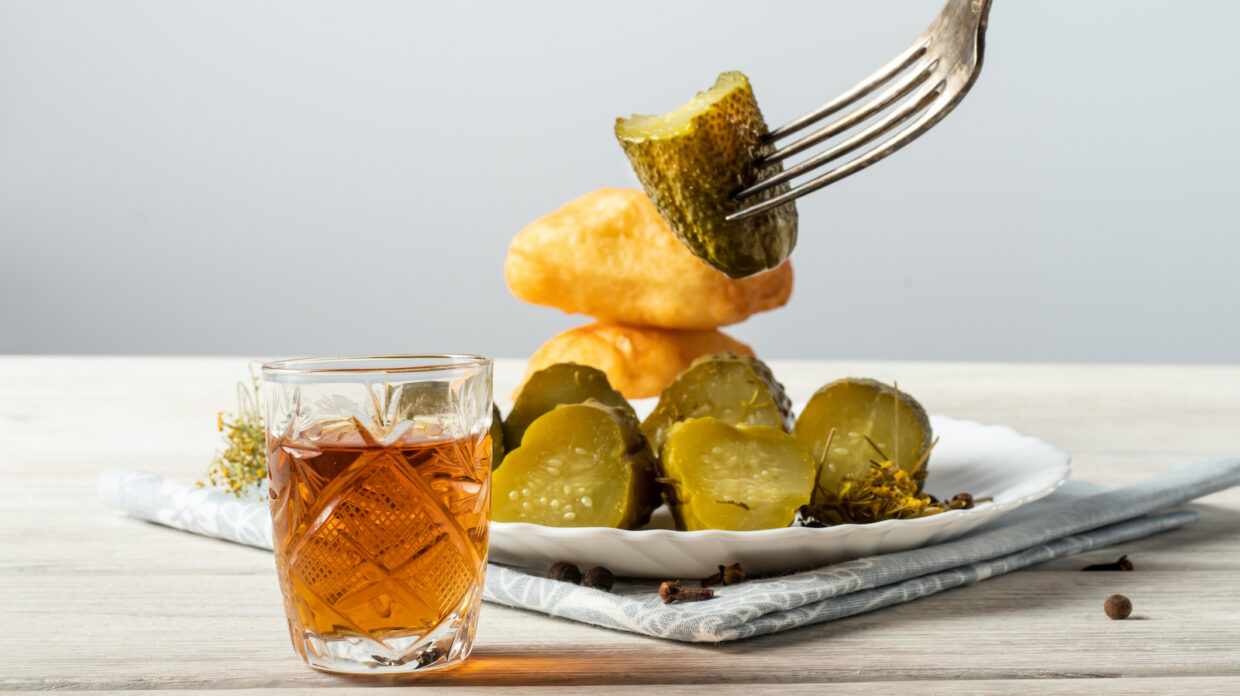 Pickles aren't an intuitive match for whisky, but the pairing can be surprisingly delicious. (Photo by Getty Images/Мария Сорвачева)

If Peter Piper really did pick a peck of pickled peppers, what sort of whisky do you think he chose to drink with them?

The question is not entirely fanciful, particularly if Peter lives in the U.S., since it is estimated that in 2019 the per capita consumption of pickles was around nine pounds. Granted, most of these pickles are made from cucumbers rather than peppers, with roughly 100,000 to 125,000 acres devoted to growing pickling cucumbers in 30 states, led by Michigan and North Carolina. The relatively mild flavor of these cucumbers makes them the perfect blank canvas for several pickling procedures.

According to Linda Ziedrich, author of three editions of “The Joy of Pickling,” the principal separation in pickles concerns preparation, specifically whether they are fermented or pickled in vinegar. “Vinegar pickles are sometimes called ‘quick pickles’ and come to us mainly from British and German traditions,” she explains. “Fermented pickles, on the other hand, come from eastern Europe, largely via New York delis.”

Sometimes called sour or kosher dills, these pickles ferment in water, salt, and spice with a naturally derived fermenting agent, usually lactobacillus, Ziedrich says. Unlike shelf-stable vinegar dills, fermented pickles are most often found refrigerated and have been identified as having health benefits similar to probiotics. If you want to be certain you have a fermented pickle, shake up the brine, Ziedrich says. If it turns cloudy, the pickle is fermented.

Arguably, a good fermented dill offers the greatest flavor complexity among pickles. On the pairing front, any number of modern American single malt whiskeys prove an excellent partner for this traditional pickle, brawnier than their Scottish counterparts and often with a woody reticence that suits them more to sour flavors than their bourbon or Tennessee brethren.

For vinegar pickles, especially the garlicky variety sometimes identified as Polski Ogorki, a peaty Scottish malt will embrace the pickle’s flavor without defanging its bite. In fact, the lingering smokiness the whisky leaves on the palate can enhance the pickle’s more subtle flavors and add new dimensions to the taste.

Of course, the pairing of pickles with whiskies comes as no surprise to fans of the booze-and-brine combination known as the Pickleback. While Irish whiskeys usually form one half of this combo, the dill pickles that supply the brine leave room for improvement. Sweet bread and butter pickles prove a superior companion, as the generally sweet whiskey character of blended Irish whiskey meets and measures the equal or greater sweetness of the pickles, particularly so when they are partnered with cheddar cheese in a sandwich.

And finally, for Mr. Piper’s proverbial peck of pickled peppers, specifically the spicy sort like Italian peperoncini and banana-pepper rings, get your hands on the biggest, spiciest straight rye that you can find, using the savory spice of the whiskey to meet and match the heat of the peppers. A beef on weck, as they call it in Buffalo—roast beef on a salted, caraway-seasoned roll—can be favorably, if irreverently, topped with a few forkfuls of hot pepper rings and paired deliciously with a solid rye whiskey such as McKenzie rye from nearby Finger Lakes Distilling, or the more commonly available Sazerac rye.

Jameson Black Barrel with Bread and Butter Pickles
The “twice charred” vanilla-y sweetness and body complement the sweetness of the pickle while also taming whatever sugary overload it may offer.

Stranahan’s Diamond Peak with Sour (Fermented) Dills
The contrast of dry, oaky malt and sour fermented flavors proves a stellar marriage, one made even better with a cube or two of ice.

Bowmore 12 year old with Garlic Dills
The naturally briny nature of the Islay whisky combines superbly with the pickle, and the garlic and smoke provide further compatible complexity.